Cicero gets a bike tunnel at MASS MoCA. 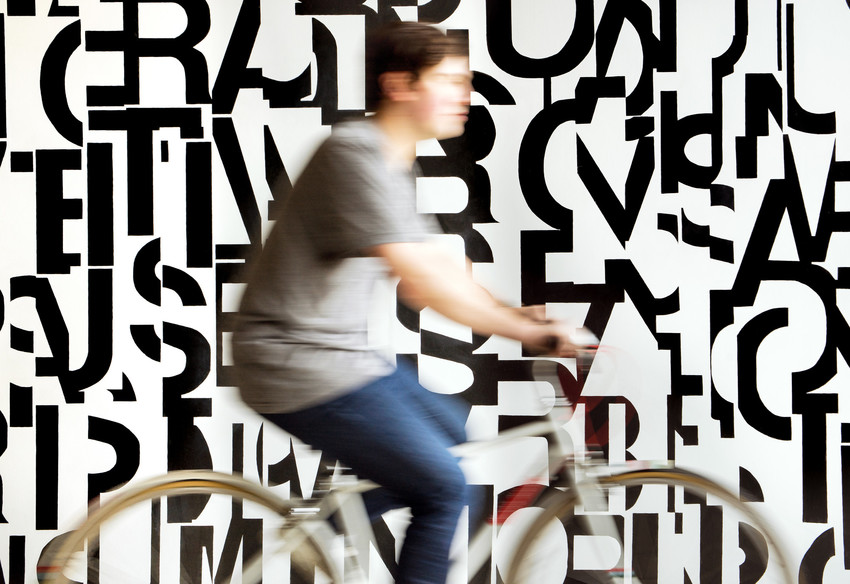 Contemporary art enthusiasts who prefer to avoid the expense and stress of flying overseas to visit such magnets of art tourism as Kassel, Münster, Athens, and Venice can still get a satisfying fix by taking a road trip to MASS MoCA in North Adams, Massachusetts—site of the recently inaugurated Building 6 (aka the Robert W. Wilson Building). Like other structures on the museum’s sprawling campus, the Wilson Building is a handsome, repurposed nineteenth-century textile mill, and now comprises a vast array of generously scaled exhibition spaces that can easily accommodate, and arguably necessitate, very large works by contemporary artists. It currently hosts monumental pieces by, among others, Laurie Anderson, Jenny Holzer, Sol LeWitt, Louise Bourgeois, and James Turrell, some of which will remain on view for decades.

Somewhat off to the side and tucked away from those galleries and the crowds they attract is Mary Lum’s wickedly smart, visually gorgeous mural Assembly (Lorem Ipsum), snaking along a ground-floor space in the Wilson Building. Accessible from an adjacent courtyard, the area for which curators commissioned Lum’s work is—according to a press release—a bike tunnel. Indeed, the accompanying photo shows one rider zipping through the passageway, which will connect the Adams-North Adams-Williamstown trails when the museum constructs a bridge enabling cyclists to speed out of the building and pedal over the Hoosic River canal. Bikers passing Lum’s alluring, text-based mural will catch cinematic glimpses of themselves in the narrow, mirrored columns that punctuate the mural’s broader painted panels. Strollers and other slower-moving visitors to MASS MoCA are afforded a different, arguably more fruitful, opportunity for engagement. 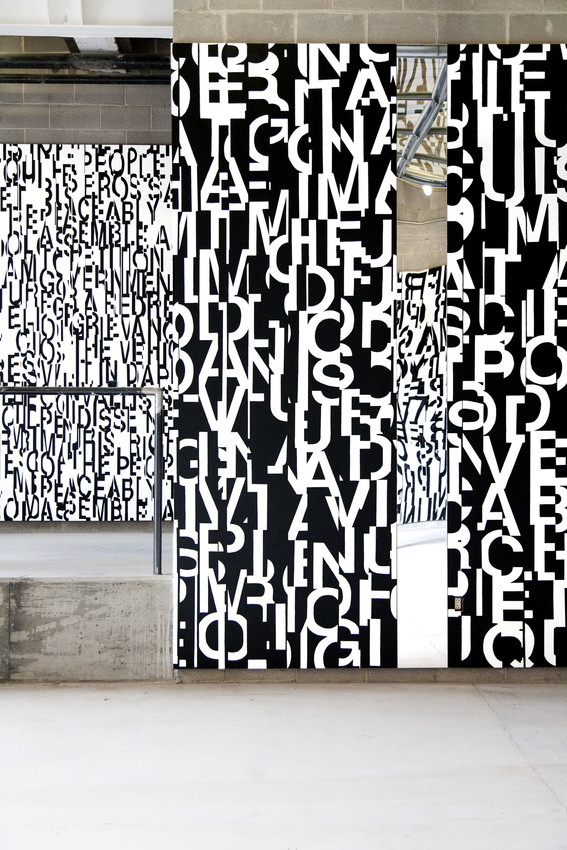 Assembly (Lorem Ipsum) is the culmination of Lum’s thirty-year love affair with language, graphic design, collage, urban space, memory, and books as a fine-art medium. For example, her book The Final Results of Psychoanalytic Treatment (1991) has the mid-century-modern look of a Signet paperback, and features sober, often outdated essays appropriated from a Modern Library anthology on psychoanalytic treatment. Lum hand-spliced fragments from romance novels, foreign-language textbooks, and comic books into writings by Freud, Jung, Ferenczi, et al. These irruptions of nonsense amid the high seriousness of psychoanalysis demonstrates the impertinence of a feminist with a sense of humor. Her disrespectful gesture, though, hardly precludes the abiding curiosity that Lum—daughter of a clinical psychologist—has in the unconscious and the psychoanalytic method.

In certain ways, Assembly (Lorem Ipsum) inverts the logic of Lum’s earlier book project, as this work foregrounds the nonsense, in the form of a section of Latin-ish gibberish based on first-century BC Latin writings by Cicero. Called lorem ipsum, it is more commonly known to publishers as the dummy text used during the design process as a placeholder for eventual content. Standing in the bike tunnel and taking in the visual staccato of Lum’s hand-painted mural, I was put in mind of how in the early 1990s Felix Gonzalez-Torres asserted—repeatedly, and in more ways than one—that “the explosion of the information industry” coincides with “the implosion of meaning.” Especially now, it seems important to remember that the artist (who died of AIDS in 1996) made this observation while invariably also noting the pernicious effects of trickle-down economics, rampant racism, and a host of other American social ills. Lum’s mural gives poetic visual shape to Gonzalez-Torres’s truism, and arguably does more than merely tell it like it is. 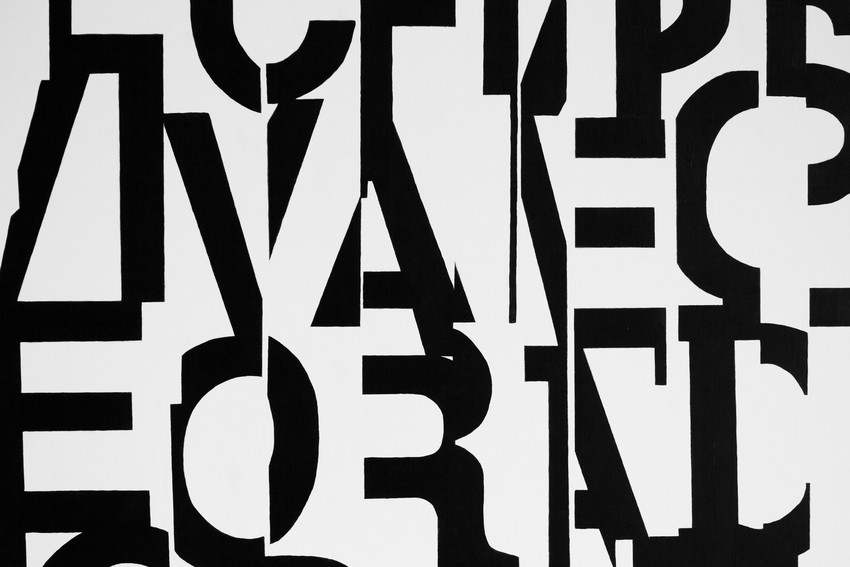 Lum scanned her chosen fragment of lorem ipsum, setting its font in the ubiquitous Helvetica—something of a cliché, graphic-design-geek artist Lum is first to admit, but a visually clear and effective one for her purposes. Into that textual body, she digitally massaged a handful of English words that attentive viewers can discover, and may well find significant. After printing the resulting collage, Lum, whom a friend once dubbed “queen of the X-Acto knife,” cut the printed text into long, narrow vertical strips, then shifted their register to further fragment the lettering and endow the whole with a constructivist look.

After scanning that final collage, the artist deployed a digital projector to transcribe her files in pencil onto sheetrock walls, the largest of which measures almost twelve by thirty feet. With the help of one assistant, Lum painted the outlined fragmented text by hand, using brushes no broader than one inch. Together, artist and assistant layered multiple coats of black or white Benjamin Moore, water-based exterior latex paint to fill letters roughly twelve inches tall—large enough to enable viewers to notice individual brushstrokes and imperfectly rendered edges. All of which is to say that, despite its use of some digital methods, Assembly (Lorem Ipsum) is a resolutely analogue work.

The mural’s longest wall coheres as fields of bold black lettering against a white ground. On an adjacent wall, three panels of similarly stuttering text—this time, white letters against black—reverse that scheme. The bike tunnel also includes a shallow mezzanine level, where a broad recessed panel shimmers with slimmer black letters against white to yield a luminously dense filigree of signs.

When I visited the Wilson Building on opening day, it was especially tempting to linger in the bike tunnel. Not only was Lum’s mural visually and intellectually engaging, its situation provided a welcome zone of calm and quiet in contrast to the amplified music resounding throughout the neighboring courtyard. The longer I stayed with Assembly, the more I enjoyed looking for and finding some of the words that Lum embedded within lorem ipsum’s larger chopped-word salad. They have lost none of their integrity as secreted, wall-bound transmitters of relevant activities, qualities, rights: “READING,” “MOCA,” “RESIST,” “PEOPLE,” “POWER,” “TRUTH,” “ASSEMBLY,” “FREEDOM.” With their emphasis on First Amendment guarantees of assembly, speech, and freedom of the press, such words assume a powerful urgency in the context of a president and administration determined to undermine them all.

As it conveys the sensory overload and evacuated significance that, from a certain perspective, characterize contemporary life, Assembly (Lorem Ipsum) challenges viewers to slow down, and rewards those who do with the satisfaction of finding meaning amid fragmented verbiage that embodies its absence. It is in that sense that Lum’s work goes beyond telling it like it is to offer those willing to do the work of completing her creative acts with the capacity to benefit from immersion, however brief, in a space where the visualization of information overload is precisely what effects a hunt for treasure—for whispers of meaning and truth.