A new collection of essays from the filmmaker-theorist. 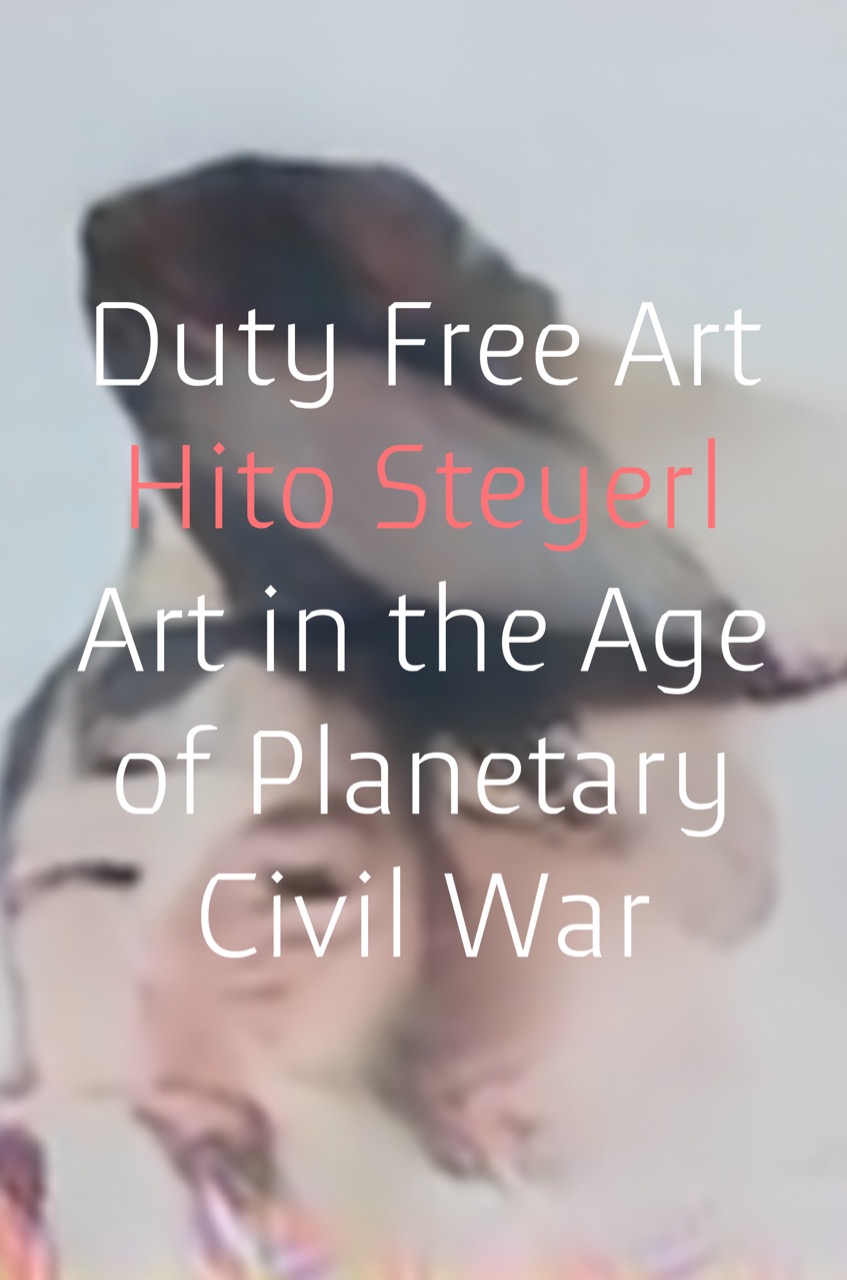 The German filmmaker Hito Steyerl has in recent years, somewhat despite herself, been embraced by the art world as philosopher and chronicler of fraught relations among art, technology, and politics. In works such as Liquidity, Inc. (2014) and How Not to Be Seen (2013) she ventures a type of documentary that draws as much on internet memes and video games as on essay-film precursors such as Harun Farocki and Chris Marker. Steyerl’s subjects are the insectal swarming of online images, the ubiquity of cyclopean surveillance, and the complex implications of contemporary art in finance, power, and even war. A good part of her work’s force derives from the visual and vocal presence of the artist herself: arguing, informing, and joking on screen. Her monologues are by turns crude and considered, learned and unruly, spilling easily into public talks and online or printed essays. Duty Free Art is the second selection of her writings to appear this year, following The Wretched of the Screen in 2012.

“Writings” is maybe not quite the word: almost everything in this book began as a lecture or performance, and most of the pieces seem, in thought and style, as if scored for the lectern or the less formal “artist’s talk.” Whether she is discussing the leaching of online life out into the physical world, the rise of contemporary fascism, or the uses and abuses of art-critical jargon, Steyerl affects a voice that’s just as apt to invoke Monty Python (“How Not to Be Seen” is the title of a Python sketch) as Walter Benjamin. Her high-low shifts and erudite irreverence derive in part from the artist’s distrust of the museum and gallery contexts in which she finds her work welcomed. In “The Terror of Total Dasein,” she remarks: “The Q&A is more important than the screening, the live lecture more than the text, the encounter with the artist more important than the one with the work.” At best, Steyerl vexes this milieu with her wayward polemics; at worst, she offers more would-be-radical blather to fill the season’s events program.

As if to affirm Steyerl’s status as preeminent post-internet artist, Duty Free Art includes an essay titled “Is the Internet Dead?” “This is not a metaphorical question. It does not suggest that the internet is dysfunctional, useless or out of fashion. It asks what happened to the internet after it stopped being a possibility.” According to Steyerl, the unconfining immateriality imagined by internet boosters a quarter of a century ago has ceded to a strange confusion between the digital and physical. Images, especially, seem to elbow their way into the real: “A nail paint clip turns into an Instagram riot. An upload comes down as shitstorm. An animated GIF materializes as a pop-up airport transit gate.” This seems a compelling argument: consider all those emoticon soft toys, and protest banners styled after the language and imagery of memes. Steyerl links the phenomenon to a pervasive “circulationism” by which we fritter our meatspace lives away, laboring in our “spare” time for the spread of sovereign images. But doesn’t this also sound like a version of the TV-era cliché regarding viewers who could no longer tell soap-opera characters from real people? And even if true, what would a solution be to the predicament Steyerl posits? “Is the Internet Dead?” peters out, like many of these pieces, with a rhetorical, and conventional, shrug: “Why not slowly withdraw from an undead internet to build a few others next to it?”

This pattern—energetic analysis followed by enervating conclusion, or none at all—establishes itself across the essays. Steyerl contrives for example a damning and persuasive picture of the connections between the art market and the most egregious political regimes, with their financial chicanery and aspirant art-washing. The title piece begins with a description of the Syrian government’s courting of the Louvre and Guggenheim with a view to building a new art museum—all of this revealed by WikiLeaks—and moves on to quote Steyerl’s own correspondence with the architects involved, who politely balk her inquiries. There follows a sharp, suggestive section about expensive works of art stored at extraterritorial freeports in Switzerland. The essay is a canny, revealing, if also playful, piece of work. But it ends by recommending the most banal of turns: we should learn from such “duty free art” and “push it even further”—but where?

Here I think we run up against the limits of the hyperactive style that Steyerl has half invented and half borrowed from the very “junkspace” online world she writes and makes videos about. Though her writing, in common with her visual art, is frequently organized around committed acts of diligent research—into malign new uses for visual surveillance, or neglected incidents in underreported wars—too often her lectures devolve to a crowd-pleasing facetiousness, or the kind of well-intended generality that is the bane of much public discussion in the contemporary art world. (The artist agrees to talk about her or his engagement with this or that political reality, but diverts to a rousing assertion that the world is broken and we must fix it. Applause follows.) There is something endearing about an academic-cum-artistic voice that will suddenly announce: “And tomorrow you might have to disco all the way to insanity.” But I’m not sure it is missing the point to want something more from Steyerl.

She might well defend the scattershot quality of Duty Free Art in the terms that she writes here in “International Disco Latin,” a piece Steyerl originally composed in response to a much-remarked 2012 essay on “International Art English” by Alix Rule and David Levine. The authors had accused portions of the art world—notably the online platform e-flux, which hosted Steyerl’s rebuttal—of jargon-blighted, obscurantist writing that read as though badly translated into English. Steyerl’s argument is that this writing is usually done by young and poorly remunerated non-native speakers—interns, for example—and constitutes a potentially subversive strain of minor and dissident English. Whether the same can be claimed for the artist’s own erratic approach to writing is another matter.

Brian Dillon’s most recent book is Essayism (Fitzcarraldo Editions, 2017). He writes regularly for such publications as The Guardian, London Review of Books, frieze, and Artforum. He is UK editor of Cabinet magazine, and teaches critical writing at the Royal College of Art, London.