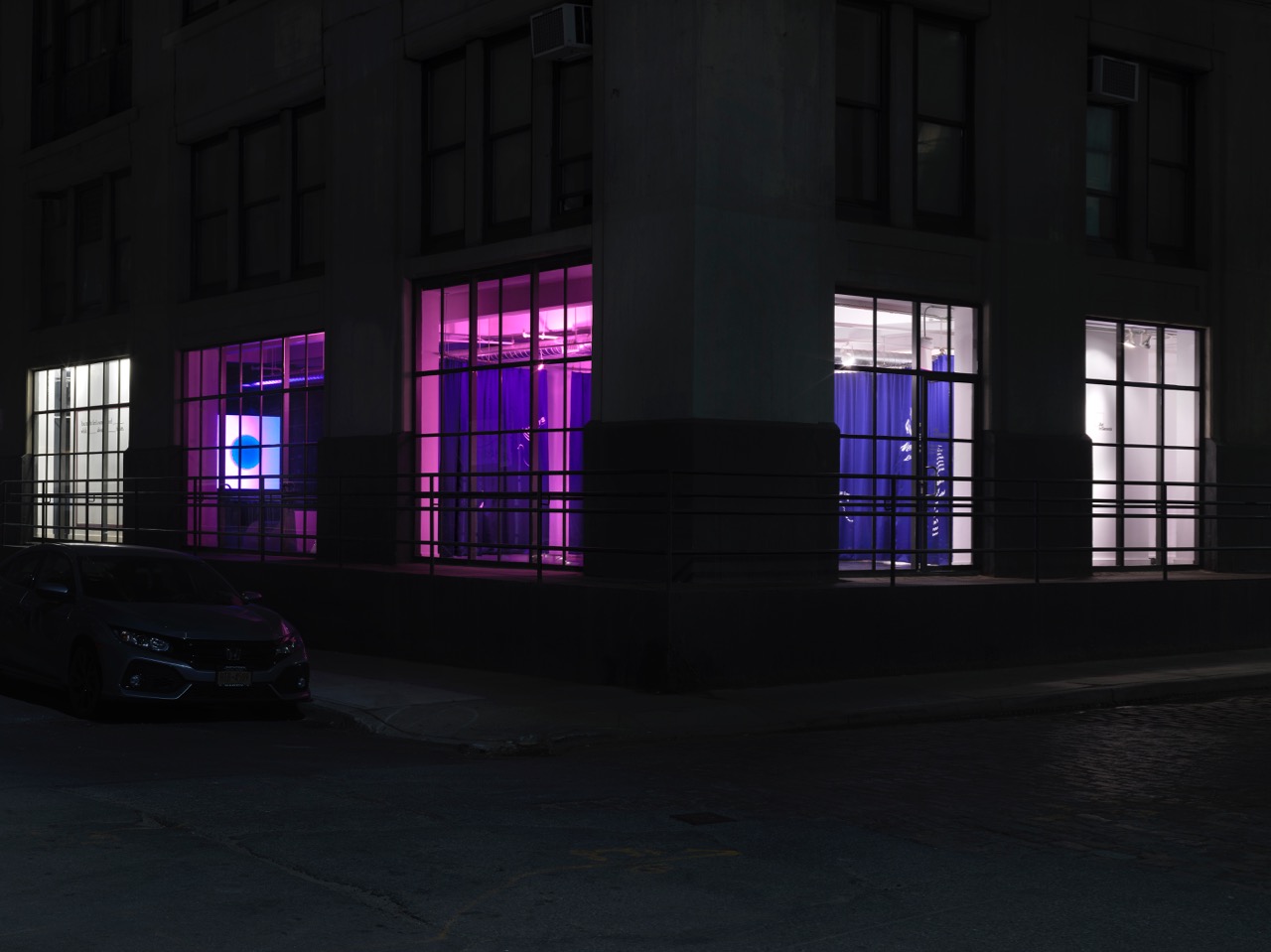 These are tricky times for art critics. I often find myself frustrated by what I see—but then I wonder if contemporary art will inevitably feel insufficient when viewed against the backdrop of a world on the verge of apocalypse. Such was my question after viewing Danilo Correale’s exhibition At Work’s End.

The young Italian artist is now based in New York, but has primarily shown in Europe. (This is his first NYC solo.) He tends to pop up in heavily discursive, far-left leaning curatorial endeavors—a darling of the market he emphatically is not—like the Marxist-flavored WHW collective’s 2009 Istanbul Biennial, or Bassem el-Baroni’s densely pedagogic Manifesta 8. Much like At Work’s End, past projects have trafficked in seductive language around labor, sleep, and the affective perils of late hypercapitalism, with resonances of trendy continental thinkers like Bifo or Luc Boltanski. Correale’s practice—which spans painting, film, installations, and publications—is informed by a conception of art as a perception-shifting tool, and inflected with a theory-happy, post–relational-aesthetics coolness.

That kind of coolness isn’t always my thing, but when I saw the press release for At Work’s End, my curiosity was piqued. Correale seemed to be trying out critical positions similar to the ones I have been focused on as responses to global eco-political trauma: withdrawal, slowness, refusal. I was excited to see a response to our age of anxiety that didn’t try to hoist a banner of outrage. My hopes, in other words, were high. 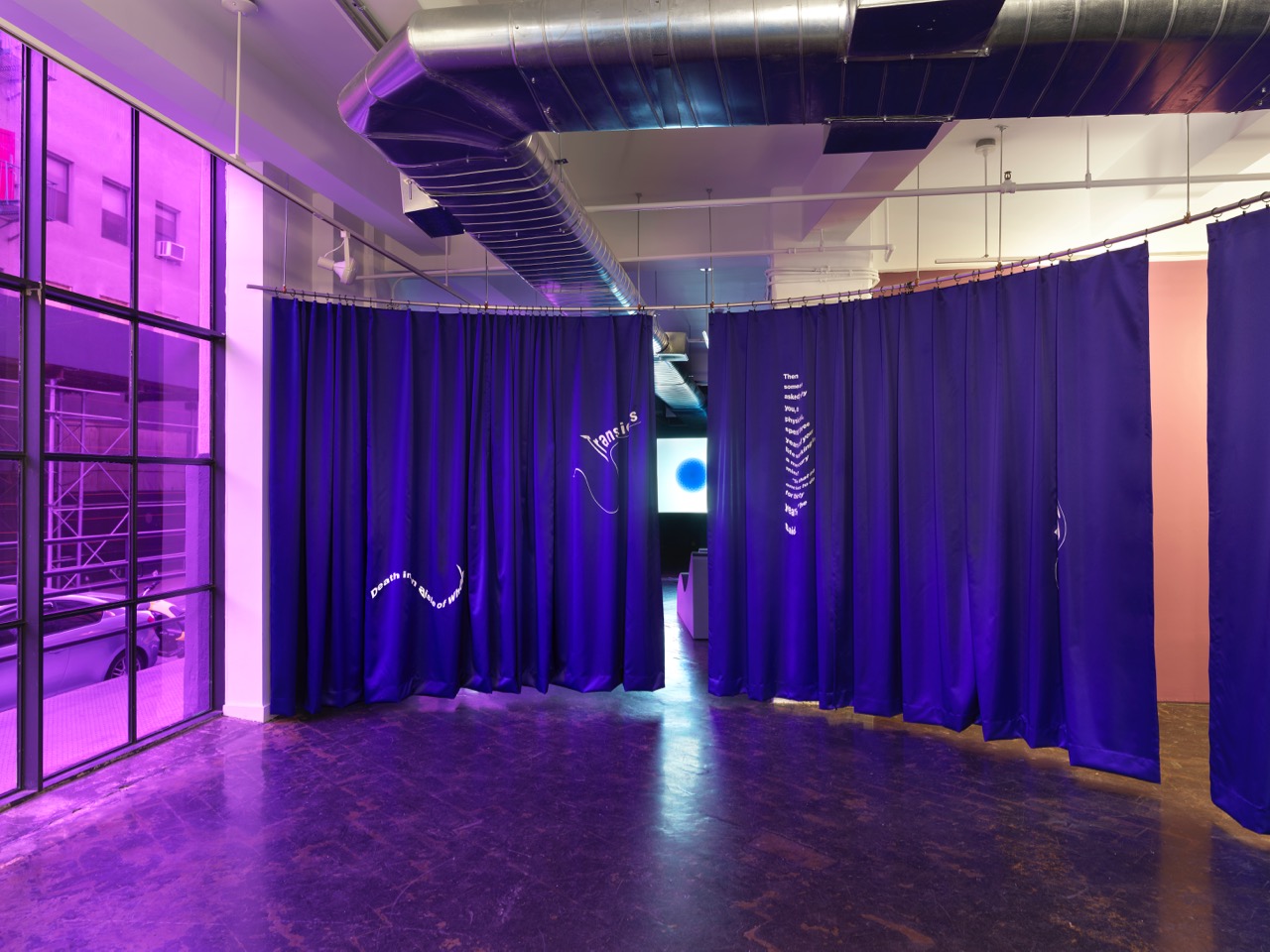 When I visited Art in General, the sun streamed through the gallery’s fuchsia-tinted glass façade, creating a warm, almost magical quality—a welcome break from the traditional chilly white cube. Upon entering, you face a curved wall of shiny, royal purple curtains, across which are splayed various cryptic texts in distorted, hard-to-read white type, dealing directly or obliquely with labor and commerce: “Death in an aisle of Whole Foods,” “automation will become the solution . . .” The curtains partition the space into two discrete rooms, lending a sort of “what’s behind curtain number one” vibe. 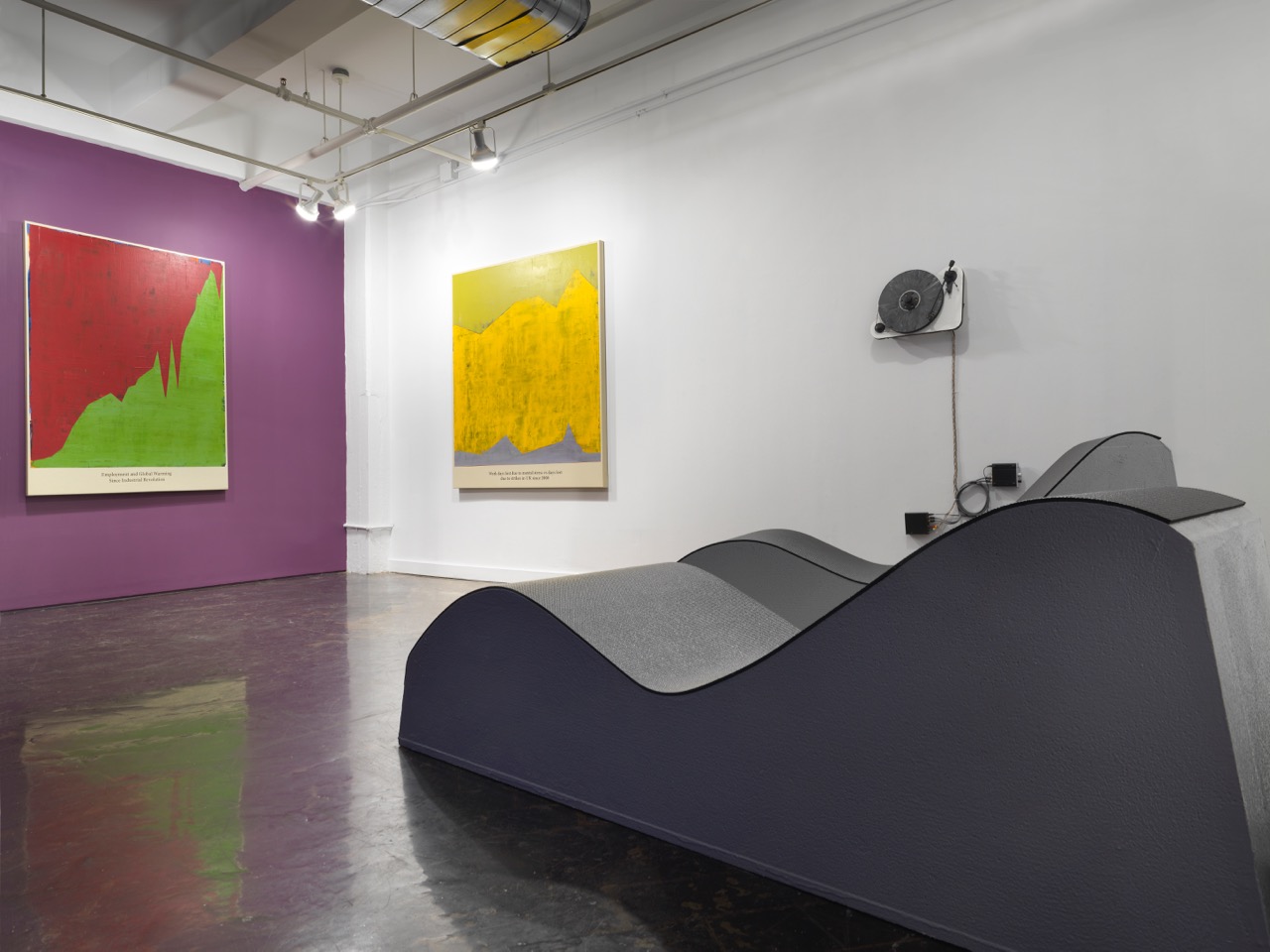 I obeyed the gallery attendant’s instructions and headed into the right-hand room first, where a bold purple wall set off two painted graphs poetically rendered in inscrutable blocks of color, accompanied by matter-of-fact captions: “Employment and Global Warming Since Industrial Revolution,” “Work days lost due to mental stress vs days lost due to strikes in UK since 2008.” These precede two long, gray couches upon which you recline and don a sleep mask and headphones to listen to the A-side of a vinyl record produced with the aid of a hypnotherapist: Reverie, on the Liberation from Work.

The sound piece begins with a peaceful male voice guiding you through the usual meditation exercises, and I must say, I was pleasantly surprised to find myself relaxing and mildly enjoying the experience—until this: “Do whatever you feel like doing . . . finish the table you’ve been working on in the community workshop . . . you are no longer a slave to the workforce.” Cue massive eye roll behind my sleep mask. My idea of a liberated utopian future does not involve communal woodworking. 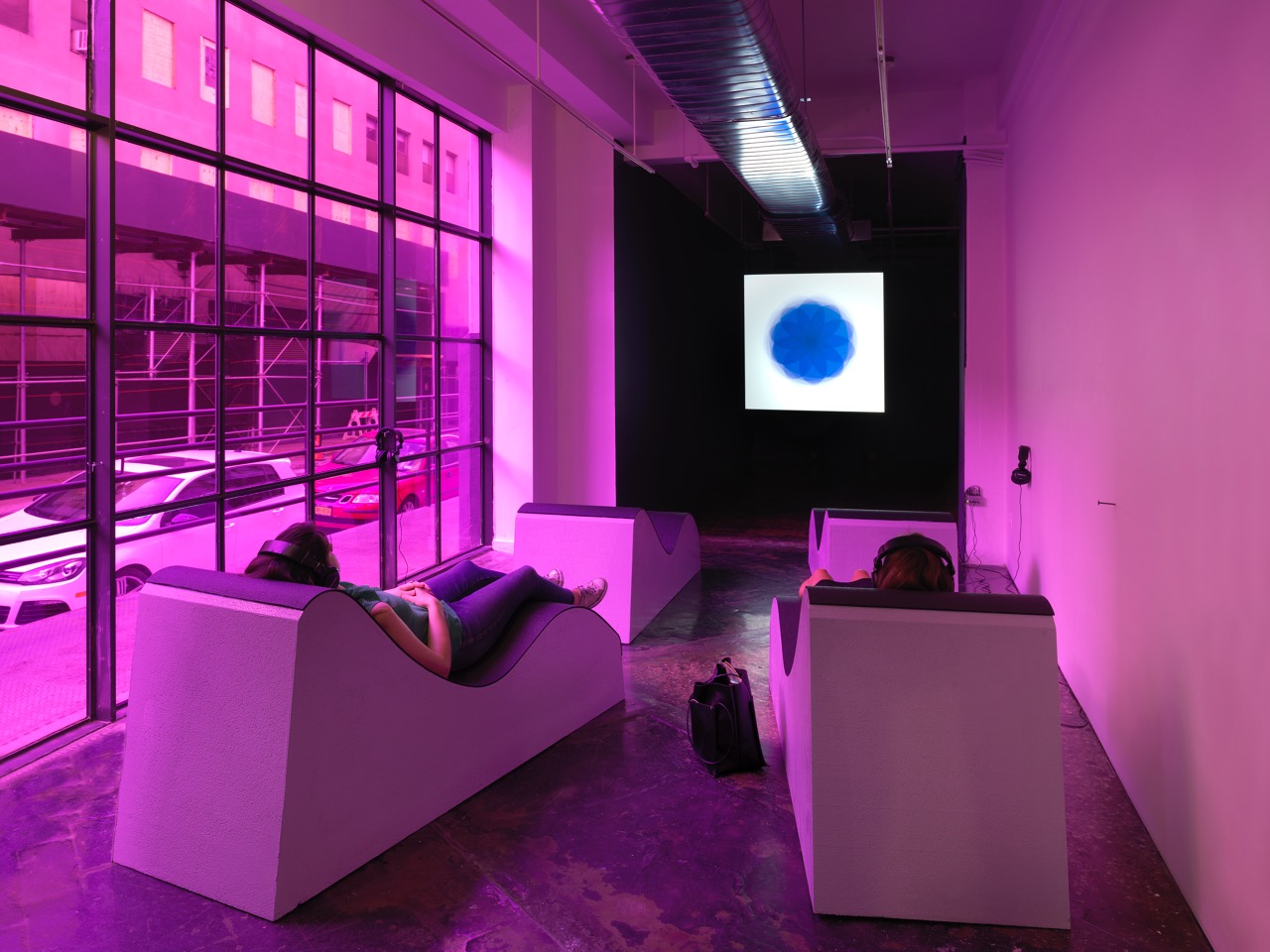 After listening to the first side of the record, you proceed to the second room—more couches and headphones to listen to the B-side, but this time with your eyes open, the better to gaze upon an animation of a fluttering, mutable dot projected before you on a floating screen. Again, guided meditation exercises, followed by exhortations to imagine a work-free future of prosperity and collectivity, crowned with a triumphant conclusion: “Allow your eyes to look around, smile, and now demand the future you imagined.” Allow me to groan in exasperation, instead.

The project ostensibly draws from discourses around the refusal of labor, alternative means of production, and self-help from the 1960s–70s (a heyday of utopian thought), but the art-as-therapy conceit dates to well before then, of course. I was briefly reminded of Cecil Stokes’s strange Auroratones from the 1940s—films that melded psychedelic abstract animations with popular songs by the likes of Bing Crosby; the goal was to treat soldiers with shell shock by inducing a soothing, trancelike state. But Correale’s hypnotherapeutic video and meditation exercises were nowhere near as weird and wonderful as Stokes’s eccentric experiment, and this was perhaps a key contributor to my disenchantment with the exhibition: its overreliance on hip, contemporary art world banalities. Vinyl records, elusive fragments of text that mean little, demands for a “better future” that is ill-defined—such is the currency of so much contemporary production. The artist might be drawing from the utopian proposals of the 1960s, but there’s none of the radicality.

Maybe my disappointment with the exhibition has deeper roots, though: in thinking about the project, I found myself struggling to understand what I really want from art, now. In the current political climate, the burden placed upon art is enormous—to resist, to represent (correctly), to galvanize, to shine a light on some sort of path out of the horror. Art is needed now more than ever, goes the rallying cry. And art tries its best to respond. But the results tend to heavy-handed instrumentalization—whether obviously, in the form of agit prop, or more subtly, in a theoretically inflected guise.

In 2011, in the wake of the oh-so-briefly hopeful Arab Spring and Occupy protests, Paul Chan wrote an essay on art’s fundamental lawlessness, declaring: “A work works by not working at all . . . a work emphatically expresses its own right to exist for itself and in itself, and questions—by merely existing—the rule of law that works to bind all to a semblance of the common good.” It seems that art as (art as weapon, art as tool, art as therapy) just withers under the weight of our expectations. Perhaps this is really why I was frustrated with Correale’s work—its promises come up empty. Is this simply no time for art? Or perhaps it’s the time, as Chan suggested, to allow art to exist as its own proposition, beyond the law of our needs and desires.