A sentimental botany blooms in the painter’s new show. 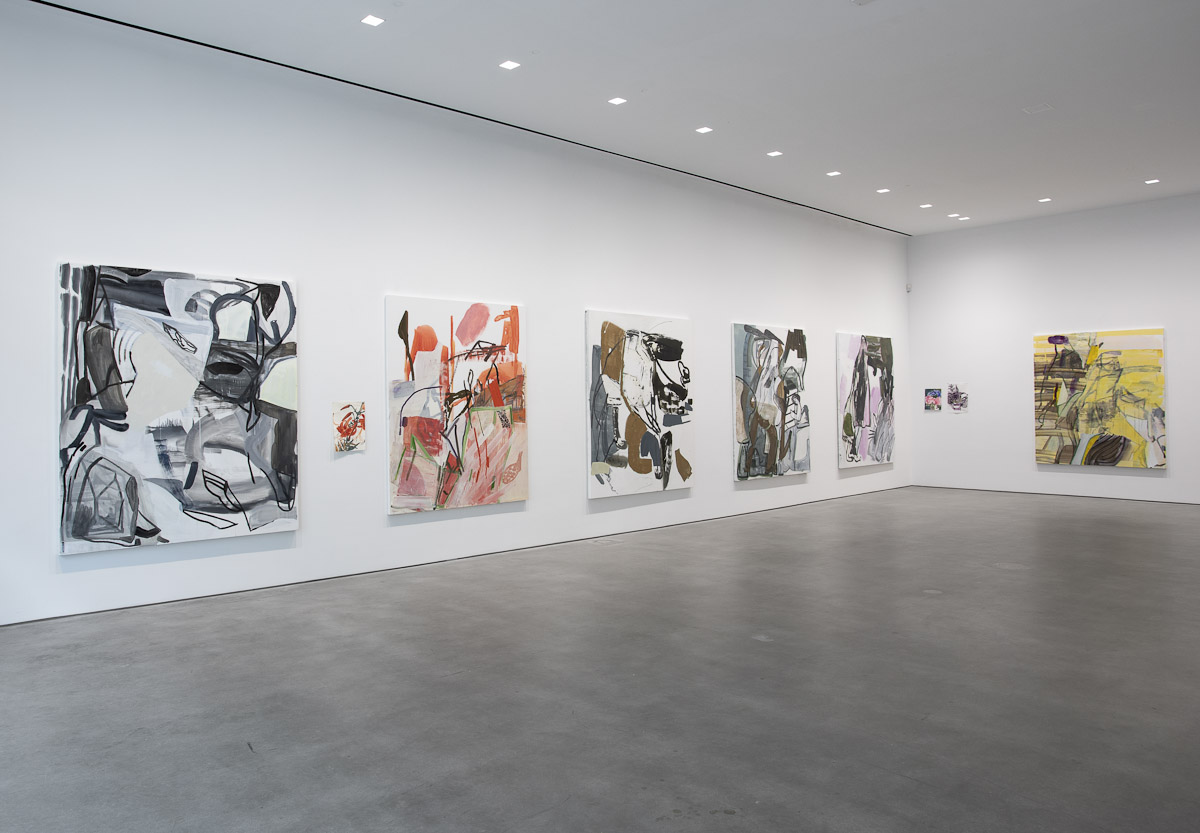 Amy Sillman’s show, originally slated for the spring, opened the last day of September, just before the president’s coronavirus diagnosis—already a lifetime ago. He was in the hospital on Saturday, when I visited the Chelsea gallery, giddy with schadenfreude and suspense, to see her big paintings: characteristically turbulent abstractions, formed by off-kilter silhouetted shapes, unhesitating lines, and shocks of strange color. I’m sure they would’ve been great on their own (enough to snap me from my revenge reverie), but the wrestled-with compositions, which form the bulk of Twice Removed, are enhanced—elevated, recalibrated for the moment—by the addition of the artist’s surprising, touching lockdown output: flowers.

“The time we’re living in is crazy, horrible, almost medieval with disease, increasing police brutality and militarization, diminishment of democratic rights,” she announces, starting off her exhibition statement by inviting us, maybe riskily, to ask the question she’s been asking herself: What does this—her art—have to do with anything? Things don’t have to be topical to be timely, though, and in Twice Removed, it’s perfect that they’re not. 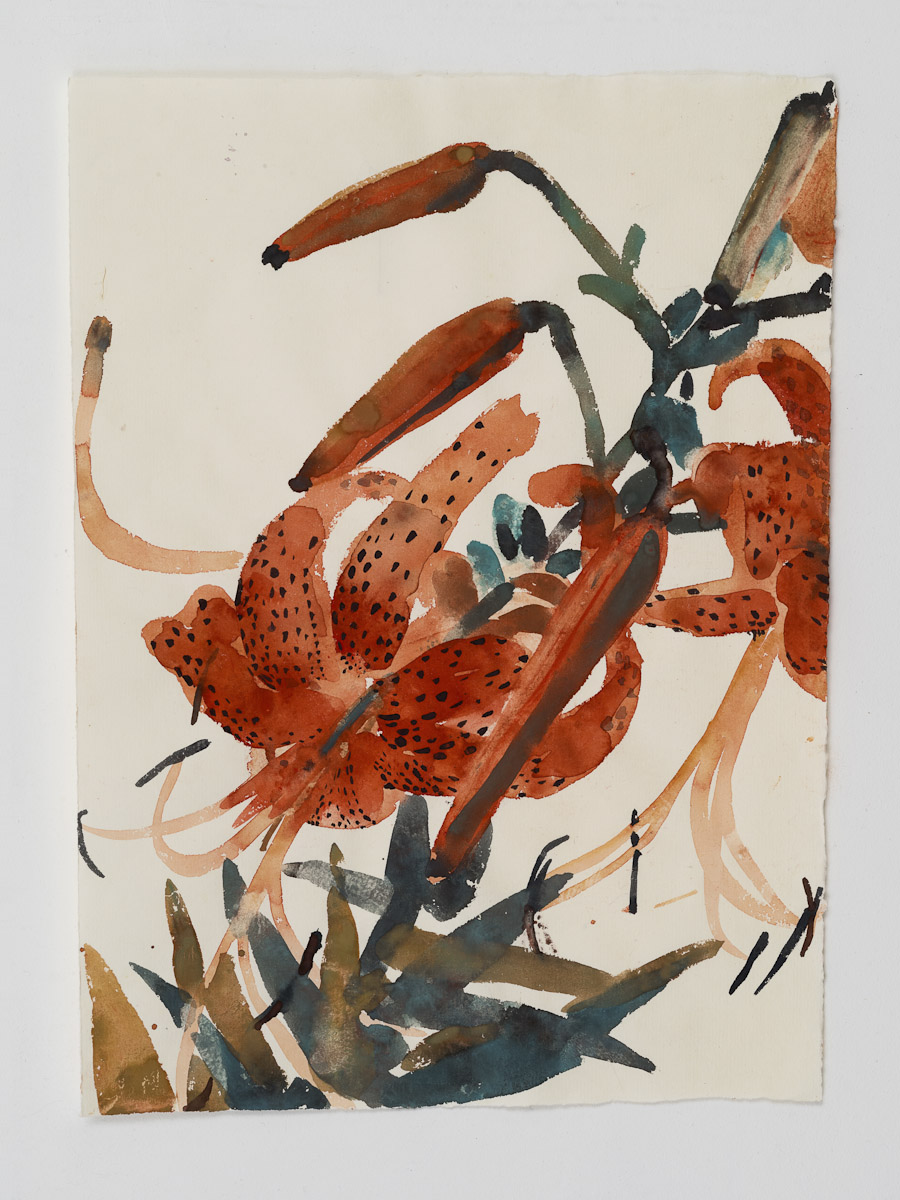 The artist, who writes (in her zines and essays) in a searching and direct style, not unlike the way she paints, explains that, while exiled from her studio by the pandemic, she worked small. Warm weather delivered subject matter—irises, pansies, hydrangeas, sunflowers, day lilies, et cetera. She refers to these still lifes as drawings, not paintings, perhaps because they’re on paper, sketchbook sized, observed from life, or informal, I don’t know. To me, they look like paintings: thinly applied acrylic mimics watercolor in the matte pictures, with areas of gouachey opacity and sometimes delicately meandering graphite lines or a barely there haze of shimmering metallic paint. And, as with her larger works, which are built mostly from AbExish gestures, weighted but not slowed down by self-scrutiny and erudition, the cut blooms and bouquets are heavy, too, but with more scattered references. 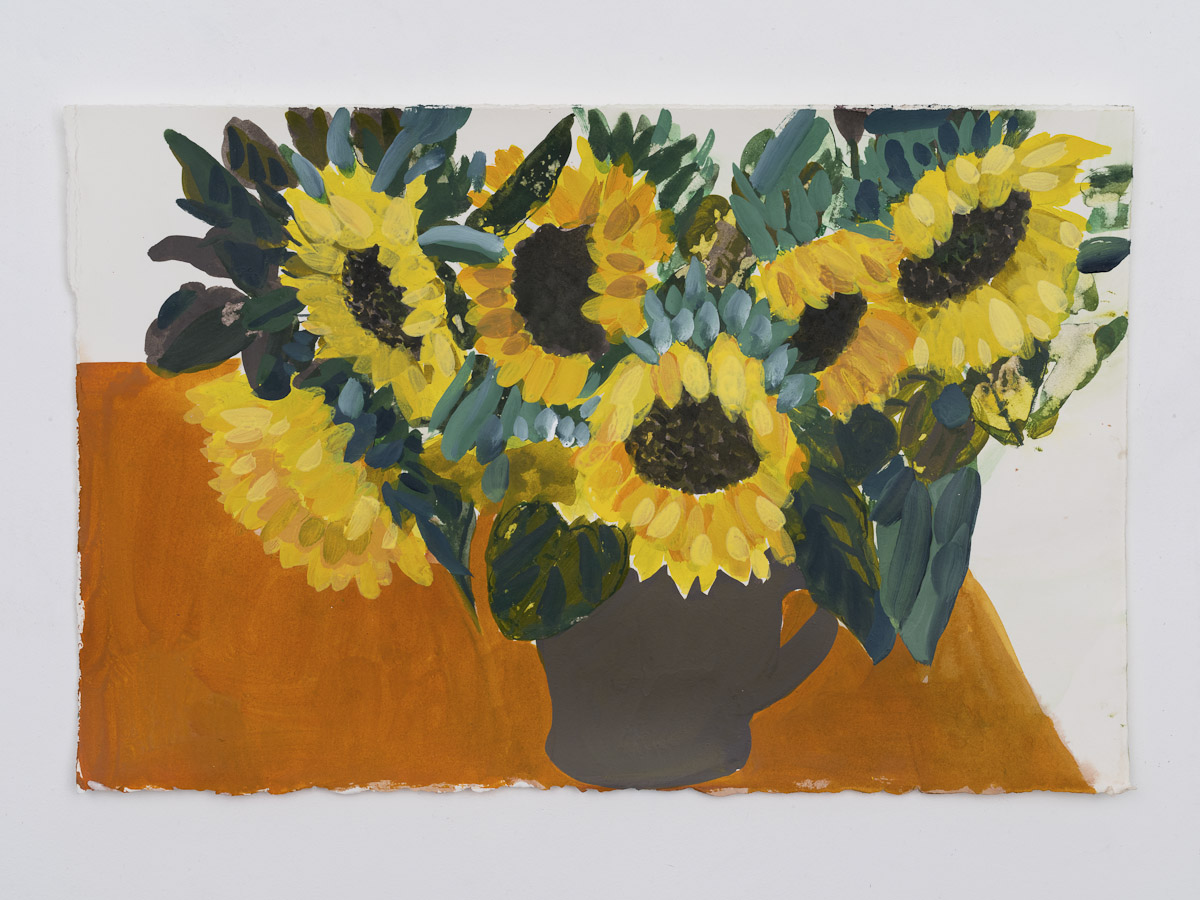 Though it’s not even art exactly, Emily Dickinson’s herbarium comes to mind (hers is the only one I know). Sillman’s drawings, in their salon-style installation, remind me of the poet’s pressed specimens on white pages, not just because of how they look, carefully pinned to the wall, but because they likewise seem a form of sentimental botany, an exacting, melancholic pastime, a hobby for a constrained, queer life. The artist’s sunflowers, some downcast and some cheerful, inevitably reference Van Gogh; Matisse’s flower vases echo in her jar of hydrangeas, her lanky tulips, and bunchy arrangement with purple daisies. And although here there are no skulls, clocks, or dripping candlesticks, the seventeenth-century Dutch tradition of the vanitas looms. The Delphian ephemerality of Sillman’s blossoms speaks not only to springtime renewal but, especially given our context, to mortality and death. 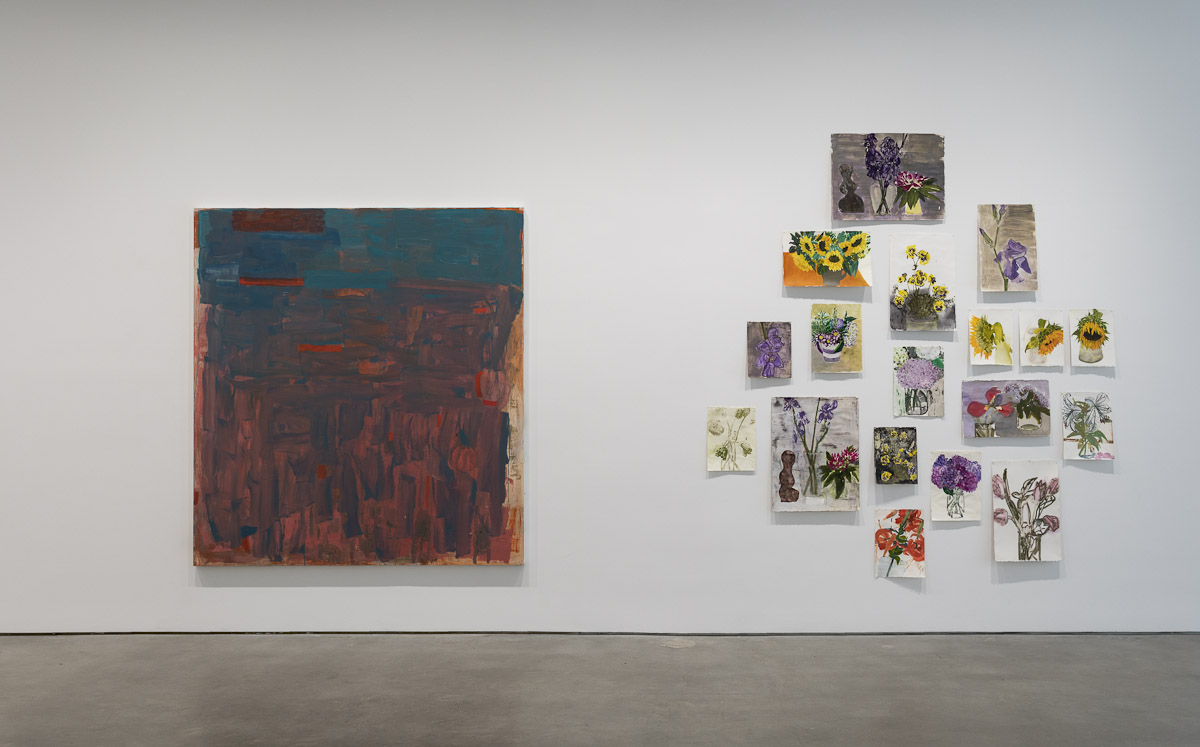 In addition to the tall, roughly teardrop-shaped cluster of these untitled drawings, which is placed next to the show’s towering wildcard—an almost seven-foot-tall, teal and muddy-crimson Rothko-referential painting aptly titled Field (2019–20)—there are a few flowers mixed in throughout the rest of the show. They work as speed bumps, corsage-like commas mostly, but sometimes they’re pivots or bridges as well. The spidery, grisaille canvas 20202, from this year, is followed by a small drawing of orange lilies, and then by Split 2 (also 2020), a tangled composition along the same lines as its black-and-white counterpart, but in the lilies’ bright palette. Read left to right, the three works might be understood as a story of metamorphosis, or as three seasons of this unbelievable year. The lilies in the middle, fiery on their diagonal stalk, represent an unmoored springtime when, as Sillman writes, “painting itself was overshadowed by the question of whether painting-life could continue to exist at all.” 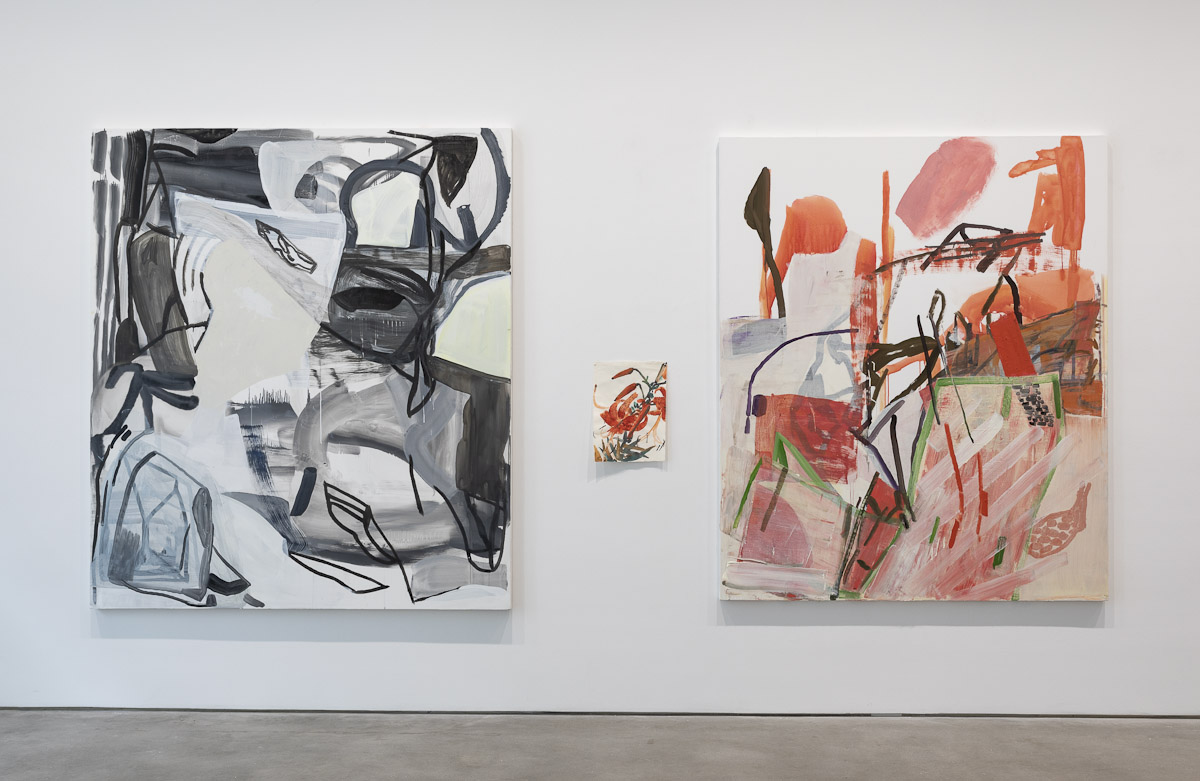 But life—in the sense of being alive and having a body—remains her fundamental, unabandoned theme. The rapid-fire, wraparound installation of her on-paper XL series (2020), like a giant flip book whose pages span three walls, makes that particularly clear. Each gesture in the tour de force speaks not to something small and mythical like the artist’s hand, but to the full-body muscle memory of a hardworking show-off, an entire personality with a distinct stance and bearing. Sillman’s favored range of motion stands out, as does her habit of circling back—both in her articulation of ragged loops (these are almost a motif), and in her visual documentation of doing and undoing, the blocky, spatially tricky redactions she leaves behind. 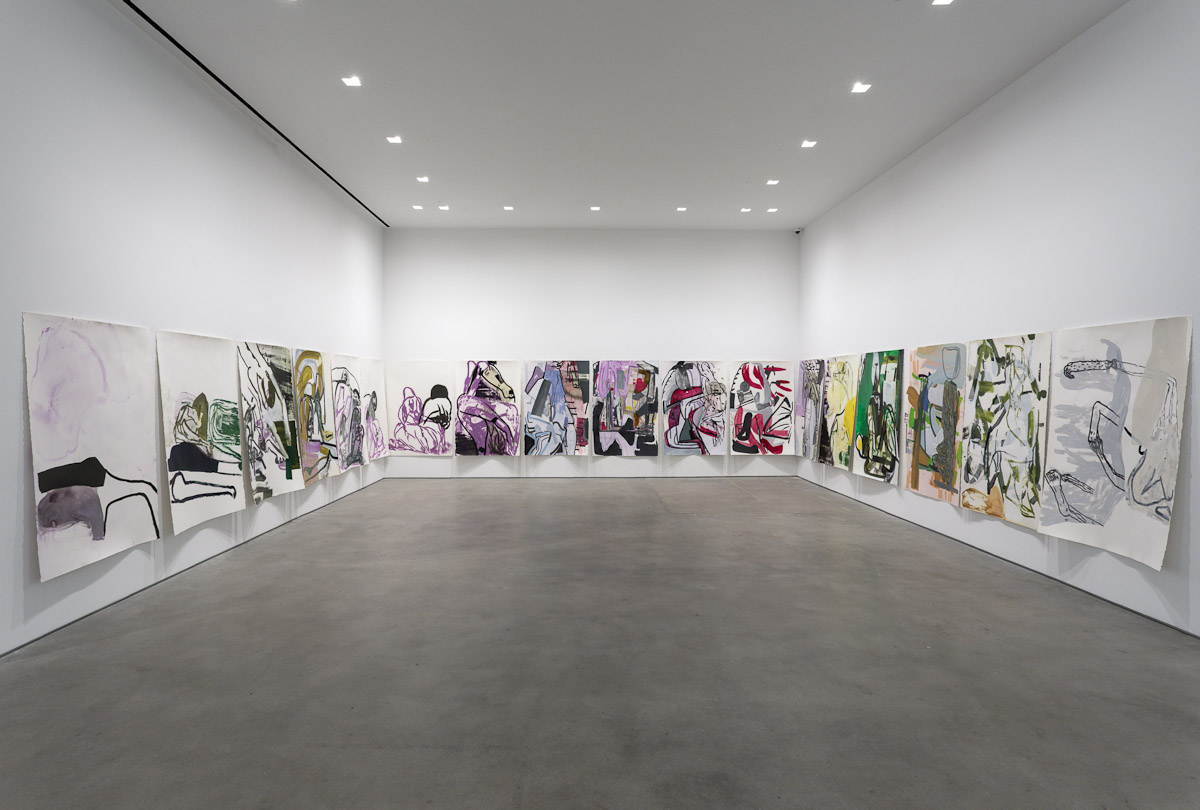 There are also, in this hybrid abstract world, crooks of arms, leaning torsos, and legs sticking out in graceful or slapstick ways. Suggestions of body parts burst from the seams or rise to the surface of vortices and melees to establish a parallel lexicon of their own.

“Your work is a meticulous study of what/how a body thinks and feels, a lived body as a compression machine of the imaginary, the symbolic, and the real,” Sillman writes in a posthumous, 2017 fan letter to the Austrian painter Maria Lassnig (she died in 2014), who Sillman once sat close to on a couch, but never met. (The epistolary essay “Dear Maria Lassnig” is included in Faux Pas, Sillman’s beautiful just-released book). In paying homage to the late feminist artist’s radical tradition of “body awareness,” a school of psychic self-portraiture, Sillman describes something of herself—her own fruitful struggle to represent embodied experience; her coolly idiosyncratic, passionately inconsistent, inside-out approach. 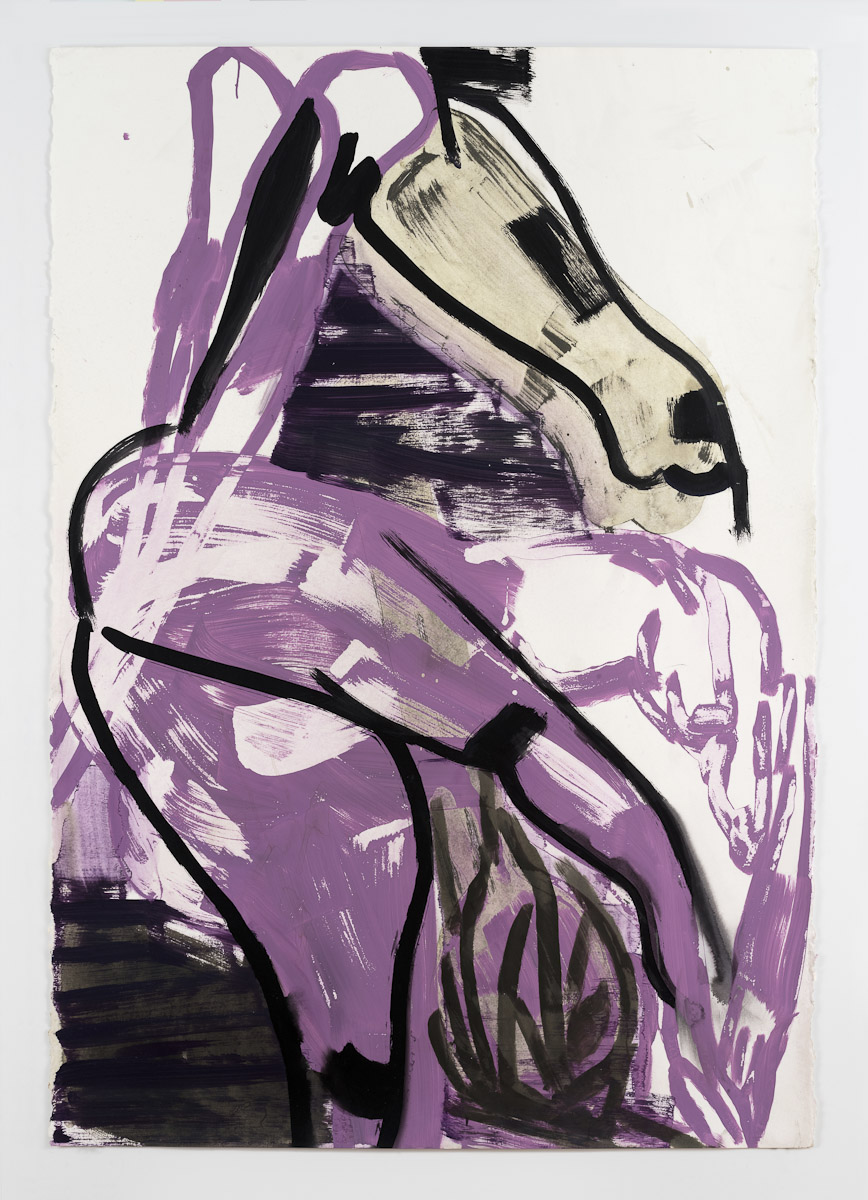 Now, with our pervasive, collective undercurrent of sadness, longing, and paranoia vis-à-vis the human organism—as we regard it in isolation, at a safe distance, while also imagining internal, microscopic actors that might attack it (or rally to save the day)—maybe such expert explorations of “what/how a body thinks and feels” ring especially true. Of course, Sillman’s work looks a little different under shifted conditions (slightly occluded by an N95’s beak in my periphery, for example, or interrupted by the tinnitus-like pitch of unrelenting, indescribable news), and it’s morphed slightly, provocatively, for 2020, too.

Her lust for life is intact but changed, with flowers—of all things—lending it a new, sharper edge. In a show meant to open last April, which will now linger past the election’s cliffhanger end, they’re festive or sepulchral, or both—ready for November, fingers crossed, come what may.