Margaret Atwood returns to Gilead in her sequel to The Handmaid’s Tale. 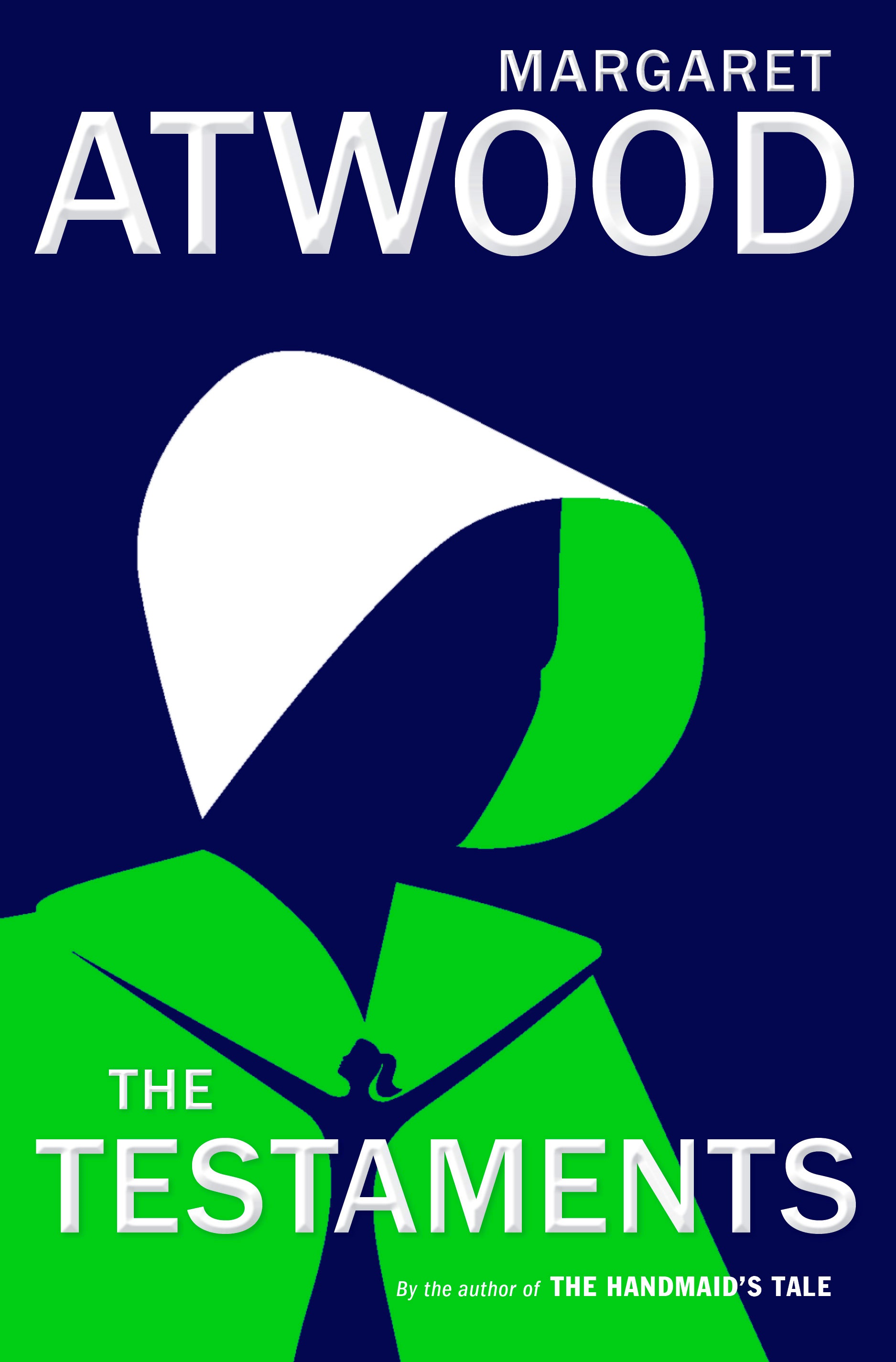 Gilead has been beaten back by the Republic of Texas, but the war with California rages on. Refugees stream over the border into Canada, while in the totalitarian country’s quiet heartland, the corpses of alleged heretics, thieves, and disobedient Handmaids—state-owned reproductive slaves in scarlet dresses—hang from hooks drilled into what was once Harvard’s historic Johnston Gate. The stench reaches the dorms of novice Aunts. They are girls who’d rather wear sack cloth and carry a cattle prod, become enforcers and executioners in their own right, than marry a Commander of the regime.

The Testaments, Margaret Atwood’s long-awaited sequel to her 1985 dystopian novel The Handmaid’s Tale, takes place some fifteen years after that Reagan-era masterpiece leaves off, updating us not with another lush portrait of life under fascism, but with a hybrid marvel—a spy thriller and a fictive memoir about survival, complicity, self-delusion, and sabotage in a time kind of like a stylized now.

The page-turner is delivered just as Handmaid mania threatens to subside, in the aftermath of last month’s season 3 finale of the hit Hulu series. (There is no airdate yet for season 4.) In its cliffhanger ending—the show has long outstripped Atwood’s original conclusion—we see the heroine Offred, played by the astounding Elisabeth Moss, wounded and losing consciousness. Her fellow Handmaids carry her, like pallbearers, through a desolate stretch of woods, together resembling a moving bloodstain on the dull ground.

The breathtaking aerial shot demonstrates, again, the graphic power of the red-cloaked figures. Yet their symbolic power has waned since 2017, the year that season 1 aired, Trump took office, and Handmaid imitators began to haunt statehouses, bearing witness to the endless assaults on abortion rights. The Handmaid as a feminist-protest persona has become ubiquitous—perhaps the gesture has grown weaker through repetition, or because its Hulu-inspired iteration has not been equal to the sprawling horror of the past few years. With The Testaments, Atwood herself seems eager to push past the political shorthand of the iconic costume, as well as Offred’s constrained perspective.

The new novel is presented as the interwoven accounts of three women, none of them a Handmaid. Atwood’s nightmare landscape this time around is panoramic and detailed, owing mostly to the hair-raising insights of Aunt Lydia. A formidable character familiar from The Handmaid’s Tale (both the book and the series), she is one of Gilead’s architects and great administrators, a member of the founding cadre of women—the first generation of Aunts—responsible for the design of the young nation’s punishing feminine sphere. When elaborated carefully and callously in her imperious voice, the specifics of the society—from its geopolitics and theology to its nursery rhymes and recordkeeping—fuel a background thrum of dread. But soon enough she opens a window of hope. As the ultimate insider, Aunt Lydia holds the key to Gilead’s demise.

In her previous life, she was a family court judge. She volunteered at a rape crisis center. Her conscription into Gilead’s service was brutal, and she knew that only avid participation, not mere acquiescence, would keep her alive. “I made choices, and then, having made them, I had fewer choices. Two roads diverged in a yellow wood, and I took the one most travelled by. It was littered with corpses, as such roads are,” she confesses. The bleak invocation of Robert Frost is an Atwoodian flourish that serves not only to illustrate Aunt Lydia’s erudition but also her world’s terrifying closeness. Gilead retools American culture as it litters fresh corpses along a road easy to imagine in Frost’s New England wood, where colonists have strewn them before. “But as you will have noticed, my own corpse is not among them,” Aunt Lydia shrugs.

The Testaments is her book—no other character can compete with her strange ruminations, her disturbing mix of wisdom and evil, and her transfixing thirst for revenge. But the other narrators, both teens, are also deftly channeled. Agnes Jemima is Offred’s first daughter (from her pre-Handmaid life), who was abducted as a young child to be raised in a Commander’s household. Atwood’s most urgent warnings lie in Agnes’s chilling deadpan, the innocent reportage of someone who can remember no other world. She recalls her early outings to church with the Aunts who educated upper-class girls: “Later we would be allowed to . . . see people being hanged or married, but we weren’t mature enough for that yet, said Aunt Estée.” It only takes one generation for Gilead to seem normal.

Agnes’s macabre childhood is a foil to her half sister Nicole’s account of life in Toronto. Smuggled from Gilead as an infant, she was raised by a couple in the underground resistance, unaware that she was Offred’s daughter. Watchers of the Hulu series will understand her significance as an embattled symbol of Gilead-Canada diplomatic relations, and in The Testaments, the grown-up “Baby Nicole” additionally represents—at first—the detached concern of an outsider, safe from distant crimes against humanity. While Atwood doesn’t step on Hulu’s narrative toes as she unites the half sisters under Aunt Lydia’s eye, and she leaves the question of Offred’s escape unanswered, there are discrepancies between the show and the books. The most important one is how they deal with race.

Hulu’s Gilead, bizarrely, is integrated. Though this has the advantage of allowing for a multiracial cast, which Atwood appreciates, the ideological incoherence of a race-blind neo-Puritan slave state is made worse by its glaring incongruity with the political present. Anti-black racism and xenophobic white nativism go hand-in-hand with evangelical forced-birth extremism—and all are the unconcealed values of the president and his party. More believably, in both the original novel and The Testaments, white supremacy is fundamental to Gilead society, though it looms in the background—perhaps to a fault.

We understand Gilead to be a white Christian ethnostate from a cheerfully sinister news broadcast in The Handmaid’s Tale about the efficient “resettlement” of so-called “Children of Ham.” Jews are shipped off, too, we learn from Offred. And, much like the Nazi Lebensborn program, the Handmaid system, it seems, is eugenicist—a response to declining Caucasian birthrates.

In The Testaments, references to Gilead’s ethnic cleansing are glancing and vague. And while it might strengthen Atwood’s story to know more, her representation of racist indifference is part of the point. When Aunt Lydia treats the nation’s brutal history as an aside—mentioning international “genocide charges” and a “Certificate of Whiteness scheme” in passing as she brags about her own political acumen—it’s chilling.

While there is no question that she herself is subjected to atrocity (the story of her arrest is harrowing), Aunt Lydia’s blithe descriptions of Gilead’s palace intrigue, and her mastery of it, belie her professed regrets. “If only I’d packed up early enough, as some did, and left the country—the country that I still foolishly thought was the same as the country to which I had for so many years belonged,” she writes wistfully. Of course Gilead—made in the image of the most shameful chapters of American history, including the one we are living through now—is in many ways the same country, and in many was she still belongs.

She hopes she will be redeemed by her ultimate betrayal of the regime, but by the end you see her long game took far too long. If Atwood leaves us with a message, it’s not that Aunt Lydia will save us. It’s to watch out for the ways she’s in us.