A new look at the photographer’s Naked City. 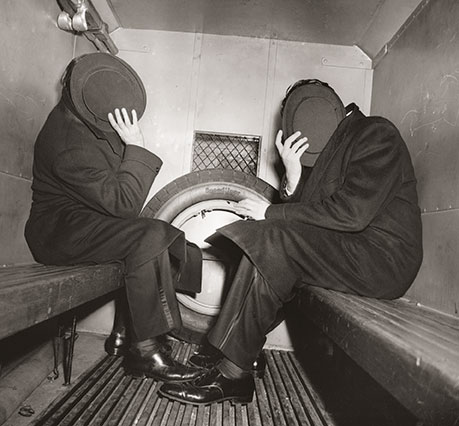 Flash photography has all but died out in our digital era, now that every phone-camera is smart enough to calibrate its own exposure settings on the fly, but in the twentieth century, the snap-poof of a bulb remained essential for low-light pictures. And nobody used it to such powerful effects as Weegee, New York’s sensationalist street photographer extraordinaire who captured the city’s nighttime personalities like a gutter-crawling August Sander, and whose 1945 anthology Naked City has now been republished in a handsome and careful facsimile of its original edition. Little blasts of burning magnesium provide the incandescent force that reveals the nakedness of his book’s title. Thumb through its amber-toned images of bar drunks, tenement sleepers, lip-locked lovers, paddy wagon–bound criminals, and various other denizens of Gotham’s demimonde and see how such figures are compelled to emerge from the dark only by Weegee’s flash, their visages suddenly and starkly illuminated for posterity. 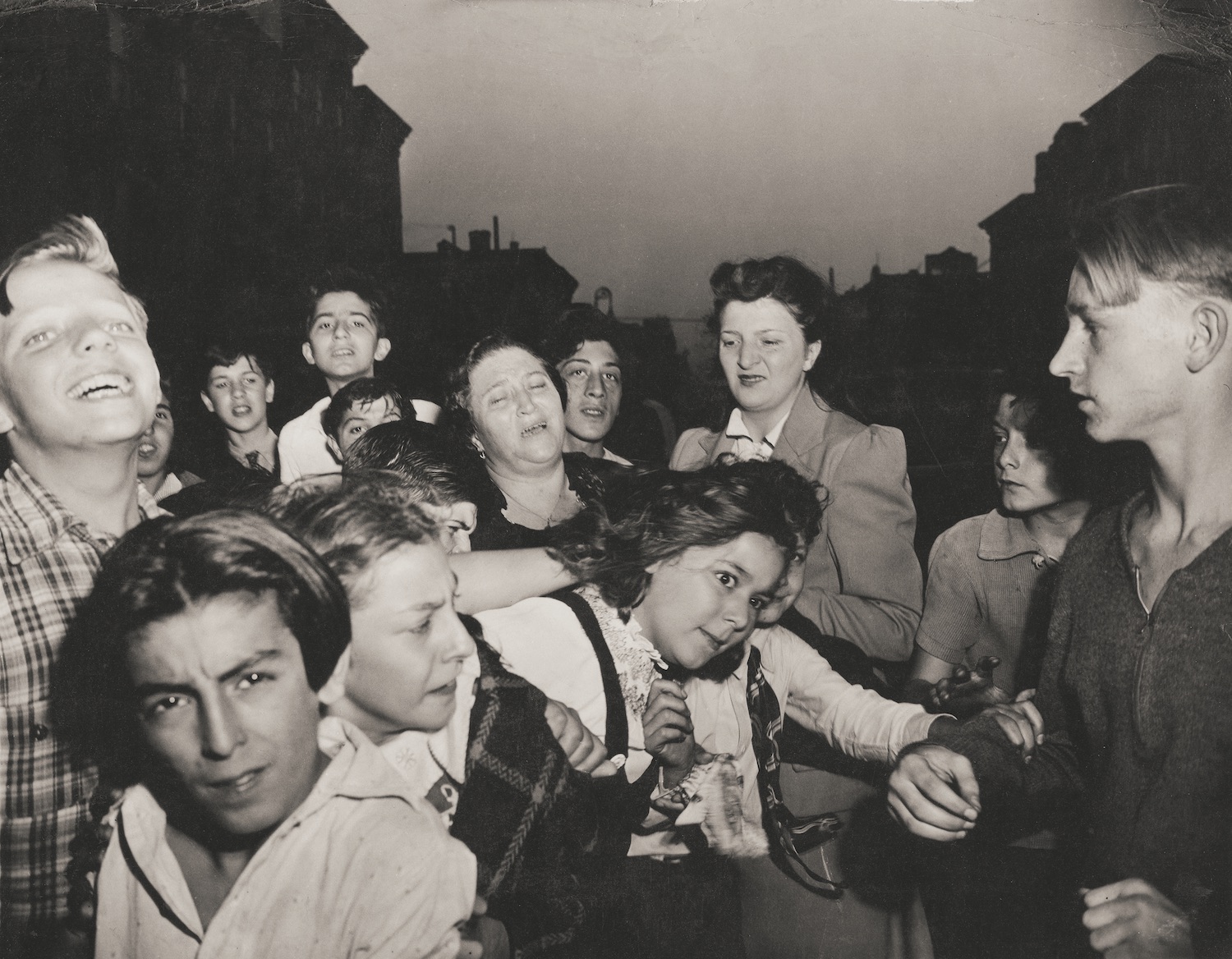 Consider one of his most famous photographs, Their First Murder (1941), a shot of Brooklyn gawkers thronged to witness a grisly street-side killing, included in a Naked City chapter simply entitled “Murders” (located right between sections on “Fires” and “Sudden Death”). Here, Weegee’s artificial light invades the squirming crowd, setting them off against the inky blackness of an anonymous urban background, freezing each expression distinctly in the white-hot aftermath of a bulb’s immolation. A middle-aged woman’s face swoons in sorrow near the picture’s center; around her gathers a gaggle of excited youngsters, each jockeying for the best view of the bloodshed, just out of frame. A girl’s face thrusts itself forward in front of the wailing woman, pursued by another child’s impatient arm; a blond boy’s silly grin widens as he periscopes his neck. Two other boys stare directly into the camera, mouths slightly ajar, momentarily distracted by the photographer’s presence and thereby permanently acknowledging his intrusion. In Weegee’s hands, the flashbulb is nothing less than the instantaneous imposition of a unique social situation, one in which both the actions of the subject and the photographer are together immobilized. 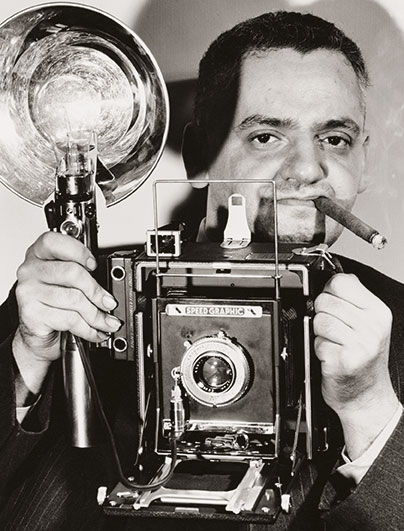 With the flash underscoring Weegee’s physical presence at each event he documents, Naked City becomes not only a collection of remarkable, witty photos but a punchy tale of the photographer’s life, supported by Weegee’s idiosyncratic written ruminations on his own singular career. Born Usher Fellig in turn-of-the-century Austrian Poland, he emigrated to the United States as a child, where his first name was changed to the more aspirationally gentile Arthur as his family dwelled in the teeming tenements of Manhattan. He often claimed that he took on his famed professional moniker—a play on the name of the Ouija board—due to his paranormal sense for locating the most lurid and surprising subjects. “For the pictures in this book I was on the scene; sometimes drawn there by some power I can’t explain, and I caught the New Yorkers with their masks off,” he writes in his introductory chapter. “What I felt I photographed, laughing and crying with them.” 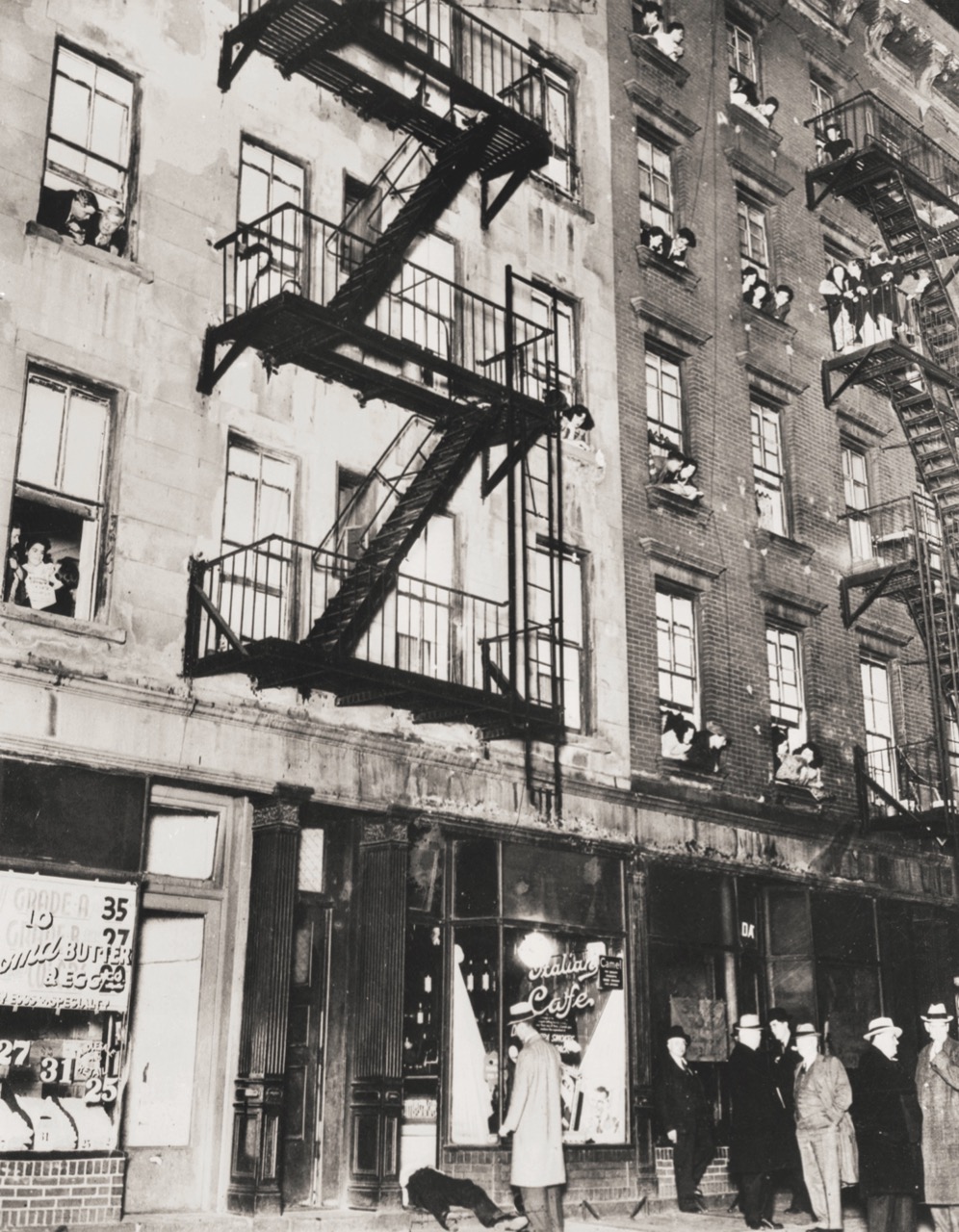 Many of the book’s most violent pictures first appeared in tabloids like PM, the New York Daily News, and the New York Post, their voracious hunger for it-bleeds-it-leads visuals funding the young artist’s development. As a testament to his strange métier, Weegee includes a reproduction of a check for $35, its statement listing payment for “TWO MURDERS.” These photos, he explains, were sold to Life magazine; one is reproduced in Naked City as Balcony Seats at a Murder, depicting residents of Little Italy leaning out their windows to spy a fresh corpse on the sidewalk below. “The other picture they bought was only a cheap murder, with not many bullets,” he writes, “so they only paid ten dollars for that.”

By the time that Naked City, his first book, was published, Weegee was already a well-known character for his journalistic contributions, becoming a kind of genius loci of New York itself. “Loving the city, Weegee has been able to live with her in the utmost intimacy,” PM editor William McCleery writes in the book’s original forward, included in this new edition. “When he goes to bed in his room across the street from police headquarters, the city murmurs to him from the police-approved shortwave radio beside his bed.” (Weegee also kept a second police radio in his 1938 Chevrolet, so his vaunted sixth sense was at least partially electronic.) 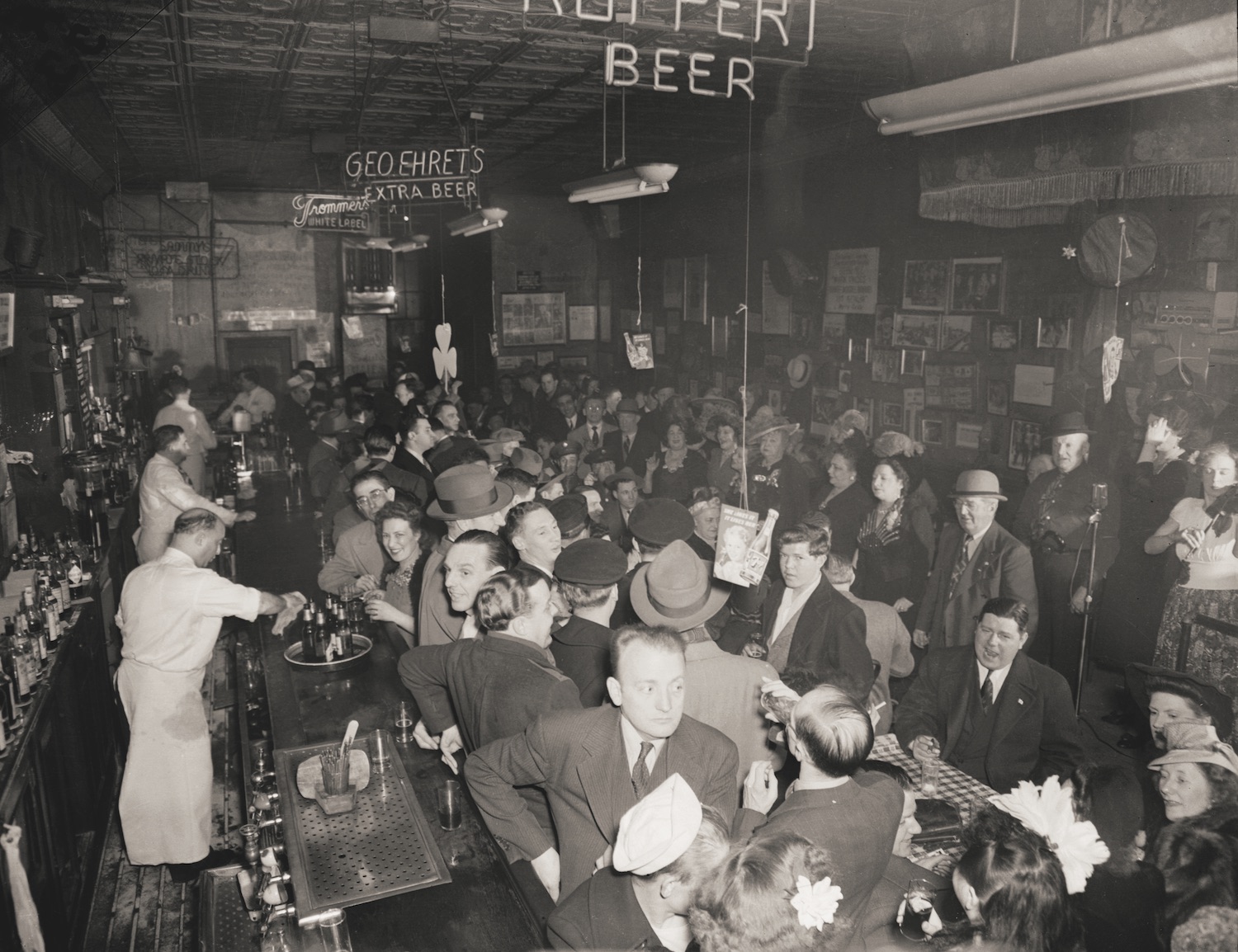 Yet only a portion of Naked City focuses on the crime-scene photos for which he became infamous; much of the book contains then-previously unpublished human-interest material: the summer multitudes on Coney Island’s beach, the booze-sodden regulars of Sammy’s Bowery Follies, laughing crowds at a Madison Square Garden circus, and bobby-soxers fainting at the spectacle of skinny, young Frankie Sinatra. Seen page-by-page alongside images of bleeding bodies and lethal conflagrations, these moments of revelry read like defiant acts of joie de vivre against the ever-present proximity of poverty, death, and disaster in a time defined by Depression and war. Perhaps this is the true origin of his nickname, as the Ouija board is a device designed not for farseeing or precognition, but rather to pierce the veil between this world and the next. 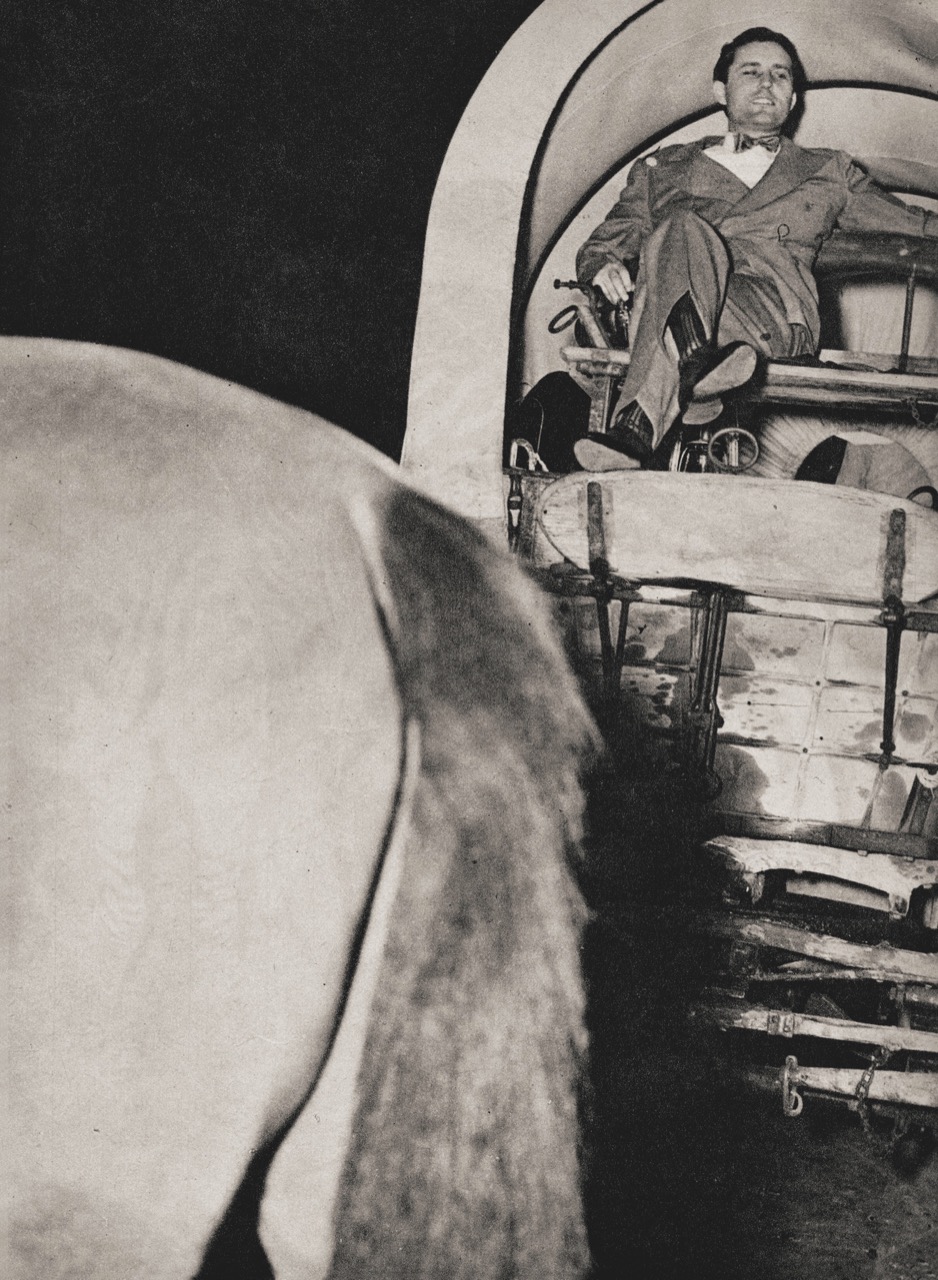 This knife-edge balancing of vitality and morbidity is economically expressed in Weegee’s penchant for generating gallows humor through visual juxtaposition, as in his picture of firetrucks dousing a burning building whose painted facade reads “SIMPLY ADD BOILING WATER,” or another of a man sleeping like the dead on the pavement outside a funeral home’s entrance. A related effect is achieved in a snapshot of right-wing politico and Nazi sympathizer Joe McWilliams; captured while riding a horse-drawn carriage, McWilliams’s portrait is dominated by the leftward intrusion of a massive horse’s ass. This is why we once again need Weegee, an unsubtle artist for unsubtle times.