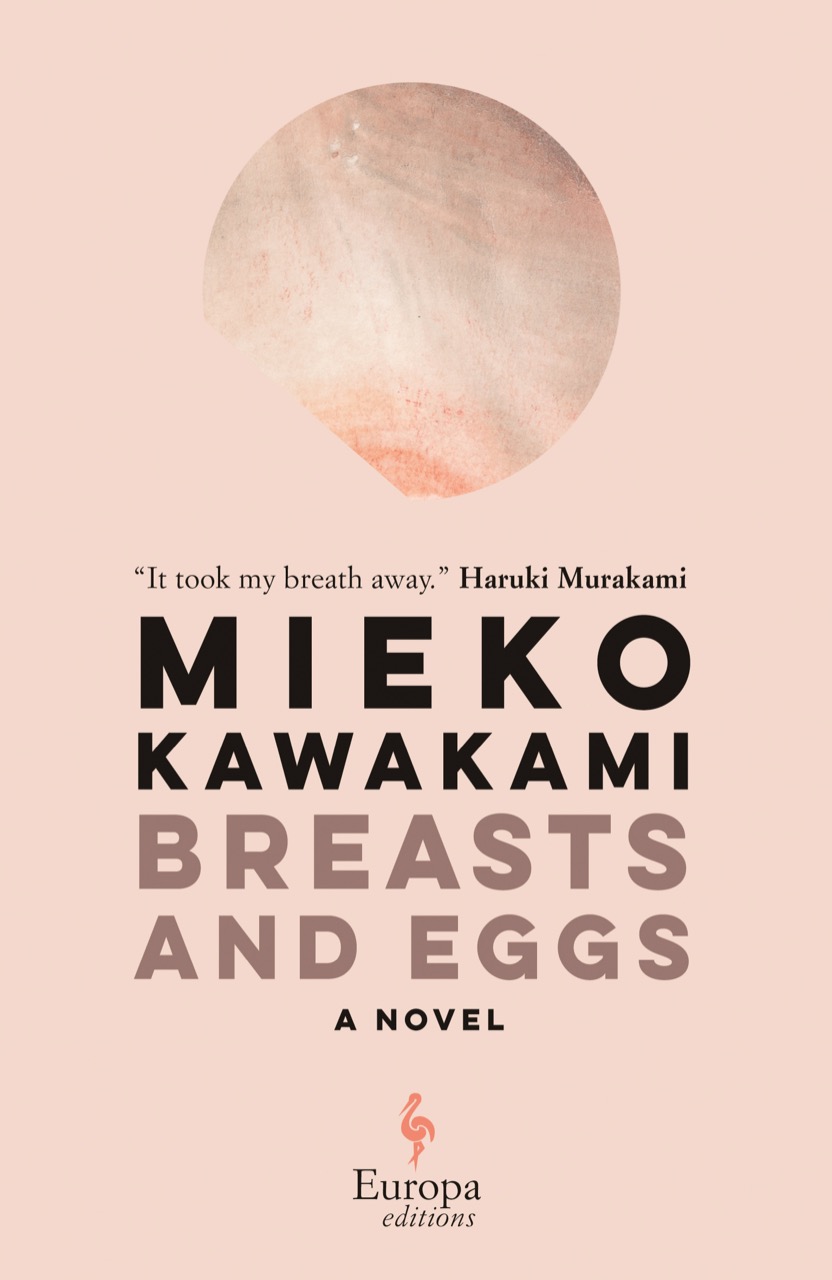 When Mieko Kawakami’s Breasts and Eggs was first published in 2008, the then-governor of Tokyo, the ultraconservative Shintaro Ishihara, deemed the novel “unpleasant and intolerable.” I wonder what he objected to? Perhaps he wasn’t into a scene in which the narrator, a struggling writer called Natsuko, pushes a few fingers into her vagina in a spirit of dejected exploration: “I . . . tried being rough and being gentle. Nothing worked. I was a little wet, but that was probably just sweat from the heat.” Perhaps he blanched at the vehemently anti-natalist sentiments of her niece, the teenage Midoriko, who scribbles furiously in her diary, “It’s not our fault that we have eggs and sperm, but we can definitely try harder to keep them from meeting.” Maybe he didn’t get the first half of the book’s emotional apex, in which three women shatter eggs on themselves in the kitchen of Natsuko’s flat in a moving, messy aria of supremely female grief-letting that sees love and rage mingled up like cracked yolks and shell. Perhaps what offended Ishihara most, however, was simply the depiction of a world of women. These females bleed and breed, they get drunk and bleach their nipples, they seek breast implants and sperm donors, and, most horrifying of all, it’s possible they might find single motherhood a completely satisfying state of affairs.

If I’m betraying a puerile delight in Ishihara’s stuffy denunciation, it’s justifiable, perhaps, through a tangential sort of pertinence: by which I mean the likelihood that Kawakami, now forty-three years old and a celebrity writer in her native Japan, might have reacted as I did. I suspect her of such glee because there is something fundamentally girlish—that is to say ingenuous and hence disarming—about her writing. It makes sense that she was a blogger before she became a famous author; the novel is gratifyingly artless, delivered in a frank and funny prose that shines with unselfconsciousness and a kind of flat-footed grace.

Originally published in Japan as a novella and since expanded, Breasts and Eggs is the first of Kawakami’s full-length novels to appear in English, in what seems to be both a loving and adroit translation from Sam Bett and David Boyd. The book is in two parts: in the first, Natsuko is visited by her sister, Makiko, who’s come to Tokyo on a quest for breast implants—to her daughter’s disgust and her sister’s bafflement. Like Elif Batuman’s titular idiot (this book’s jacket comes, pleasingly, in a femmey shade of pink similar to Batuman’s novel), the narrator of Breasts and Eggs is an innocent, at times charmingly obtuse. At a theme park where Natsuko herself remains too scared to go on any rides, she tells Midoriko about the surprising safety of Ferris wheels, structures built to withstand anything. Her niece, sunk into intransigent silence, communicates only through words written in a fiercely guarded notebook, brandished at her interlocutor when needed. Natsuko prattles on:

It just came to me, maybe we should all live on ferris wheels. I was really serious about it, too. We’d all have houses up there, and wave at each other from our windows. We could use paper-cup telephones to talk to the next cabin over, and we could set up laundry lines for hanging our clothes. I remember drawing things like this a lot, a whole world full of ferris wheels. You know, a world where everyone was safe from earthquakes and typhoons and everything. A safe world.

It’s a child’s fantasy, of course. But “a safe world” is also the painfully legitimate wish of adult women working their bodies to the bone in a world as precarious and brutal as this one. The novel speaks to the stories of Lucia Berlin; there is the same sense of a dispassionate but honoring gaze cast on working-class women, dogged and unsentimental in their survival. Natsuko and Makiko’s mother has died at the unjust age of forty-six. Makiko, who at an emaciated thirty-nine years old strikes her sister as looking more like fifty-three, works nights as a hostess in a seedy bar called Chanel where everything is decked out in the (counterfeit) interlocking Cs of the fashion house. “We had no money,” Natsuko says, calling up a girlhood memory of visiting the baths with her mother and sister. “We had nothing. But we had each other. . . . There were always women in the space beyond the steamy air. . . . Naked as they sudsed up their hair, sank into the water, heated their bodies. Countless wrinkles, straight backs, sagging breasts, gleaming skin. Stubby little arms and legs, age spots dark and light, articulated shoulder blades—bodies laughed and chattered about the silliest things, airing their frustrations or bottling them up but most importantly surviving, day by day.” I thought, in this rhapsodic, teeming description, of the fleshy paintings of Cecily Brown. Which Shintaro Ishihara would probably hate too.

The first question Breasts and Eggs confronts a reader with, via its opening chapter’s title, is “Are you poor?” The way to answer this, Natsuko asserts, is by asking how many windows a person had growing up: “If they had none, or maybe one or two, that’s all you need to know.” It follows, then, that someone who’s endured a nearly windowless childhood should crave the panorama of a Ferris wheel, a contraption that allows you to ascend within what is essentially a window—a glass bubble in the sky. The Ferris wheel, the book’s central metaphor, comes full circle (pun intended) in the second half when Natsuko once again visits the fair. Here, almost a decade has passed, Natsuko has found success as a writer, but is occupied by another question: Should she have a baby on her own? She meets Aizawa, a diffident doctor who’s written a book about his experience as the child of a sperm donor.

A tentative, unorthodox romance is sealed, naturally, at the top of the wheel. Their cabin suffused with summer twilight, the mood is quietly effulgent; Kawakami’s images often recall the low-key luminosity of Yuko Tsushima, another Japanese writer who was concerned with her country’s mores around single motherhood: “Somehow,” Natsuko observes, “we had made it past the top and were beginning our descent, like we were drawing a circle in the summer dusk that no one would ever see.” Finally, the sex-shy Natsuko is compelled to touch her companion. As she makes contact for the first time, her palm “connected with the boy he used to be, touching Aizawa as a child—like [she] was reaching out through space and time.” Both, in this moment, are children; both, in this moment, are saved.