From horse-training machines to neon sex: a massive show looks back at five decades of the artist’s work. 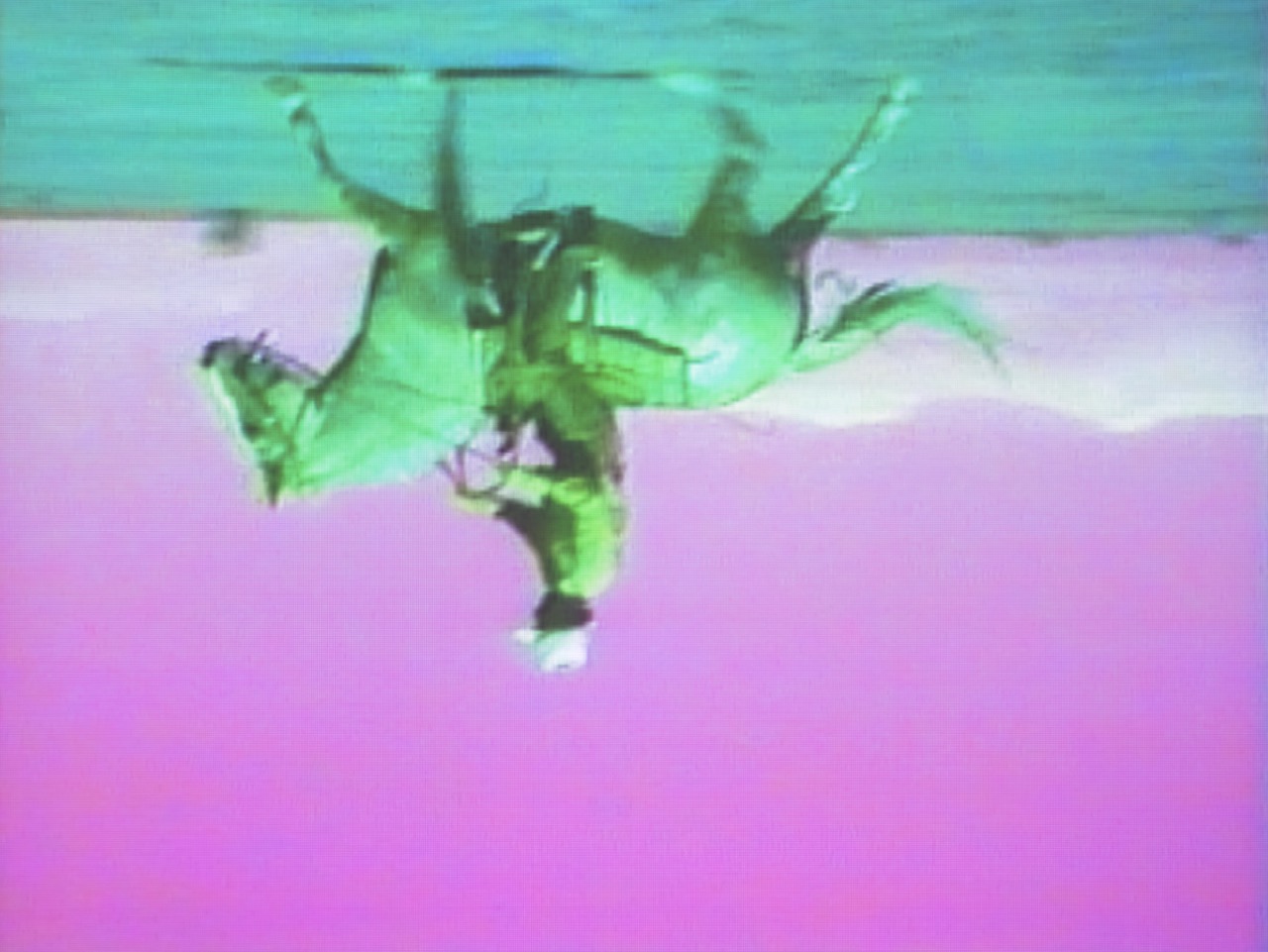 Suppose you, like Heidi Naef (chief curator of Schaulager Basel) and Kathy Halbreich (MoMA Laurenz Foundation curator), wanted to organize a show of more than fifty years of Bruce Nauman’s work, a bewildering cornucopia of media and large-scale sculpture projects. You have little choice but to go big. So you include many of the seventy-seven-year-old grand-homme-of-American-art’s best-known sculptural constructions and room-sized pieces, as well as his massive neon signs, fountains, videos, narrow corridors, sound installations, I-beams with chairs hanging off them, and colossal models for holes in the ground. The show would take over both MoMA PS1, where you would Naumanize almost every space in the building, and the ample sixth floor of the MoMA in Midtown. What title would you give a show so overwhelming, so comprehensive, so relentless, and with such an outrageous footprint? How about Disappearing Acts? Audacious, certainly. What exactly is disappearing, one wonders? Space for non-Naumans to show their work? Ability to feel anything short of awe? Oxygen? 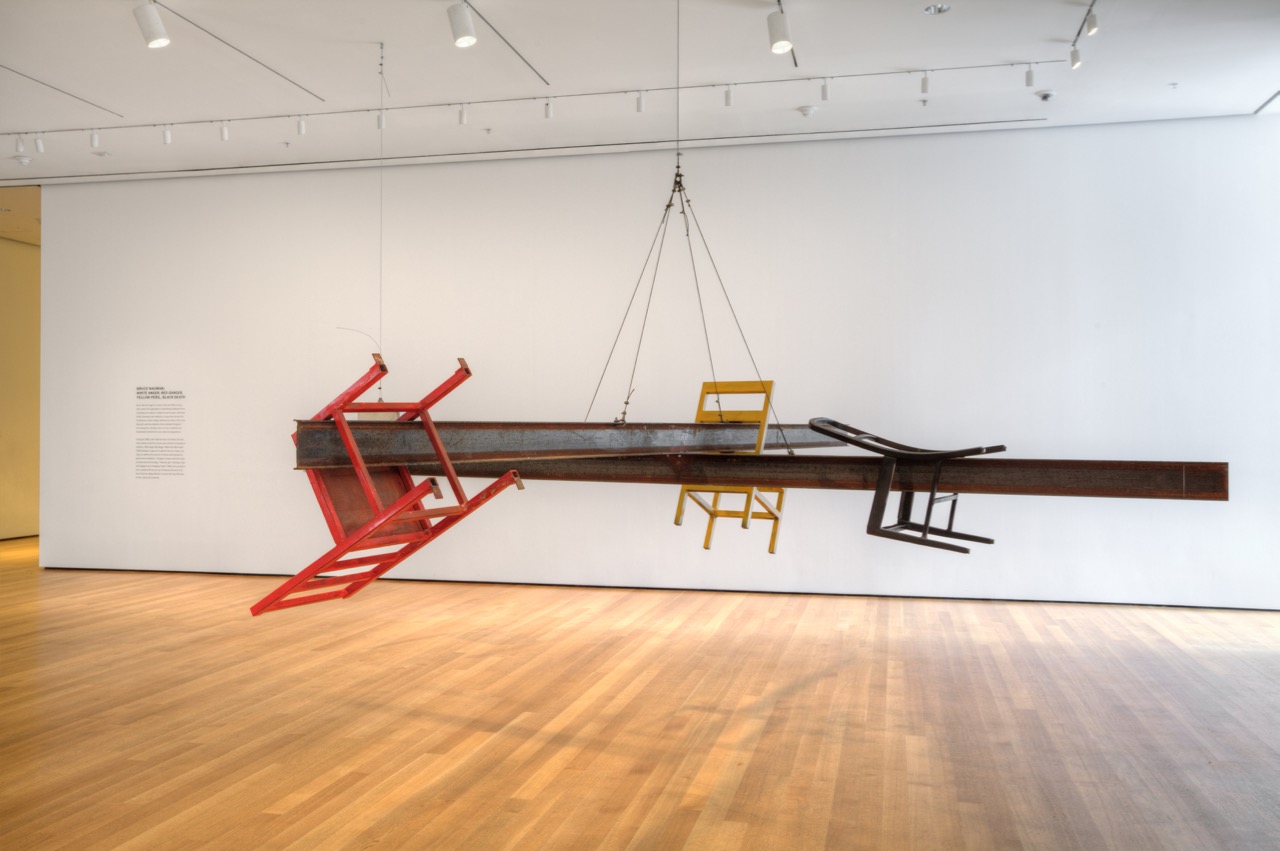 Actually, Nauman fades into the background—just slightly—since the accomplishment of mounting the exhibition feels impressive throughout the show even when the work doesn’t. But the wide variation in his art can’t help but provoke a mixed response; since Nauman is about as faithful to form as Donald is to Melania, any retrospective of his work guarantees different reactions from room to room. 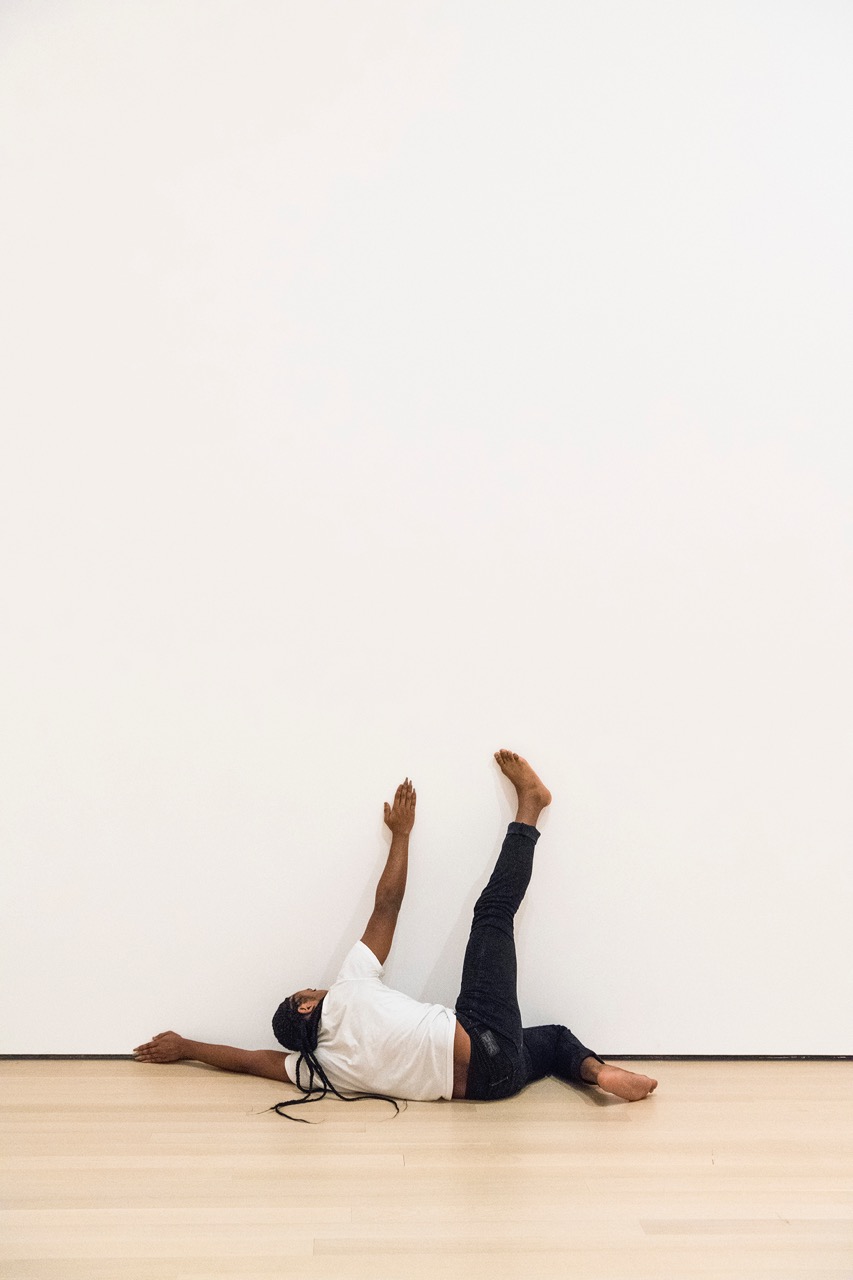 His tendency to switch gears also highlights another of his trademarks—absence, or, when he includes himself in his work, an affectless presence. In various video works like Wall/Floor Positions (1968), in which he adopts 134 different ways of interacting with a wall and floor, or Contrapposto Studies, i through vii (2015/16), where he walks back and forth around a square in the middle of his studio, he aspires to turn his body into a material without acknowledging the political reality of that body, then or now. The lack of personality in his persona sometimes recalls Chance the Gardener from Being There, whose simple demeanor allows the public to project anything they wish upon him, often more than is present, until he winds up with the presidency. 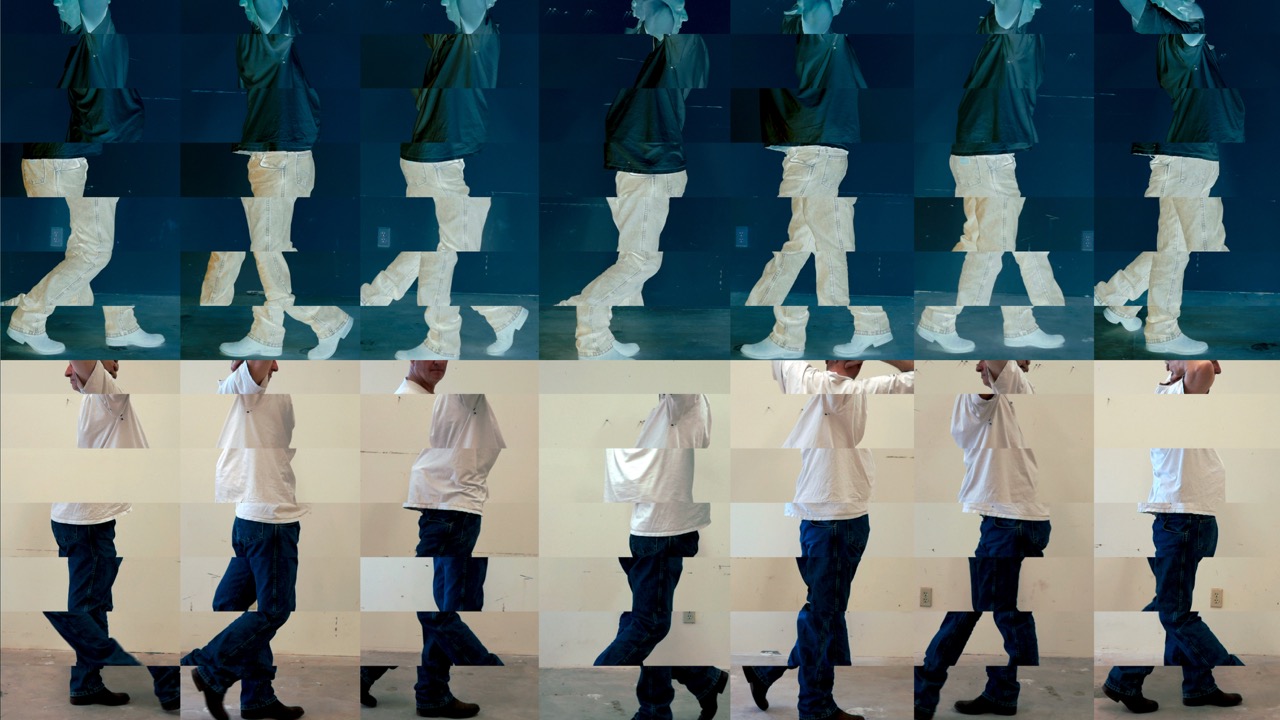 Nauman’s peripatetic aesthetic has also allowed people to see in him what they wish—rather than peg him as “the guy who does x, y, or z,” he’s “the guy who does x, y, z, k, q, ə, ß, and maybe ¿”. His most famous disappearing act was leaving New York after a year in his youth, deciding instead to traverse the American West, finally settling in New Mexico in 1979 and becoming a rancher, in the process absorbing some cowboy mojo to add to that handsome wunderkind glow. Thus he remained AWOL from the center of the art world, yet capable of setting trends from a distance. 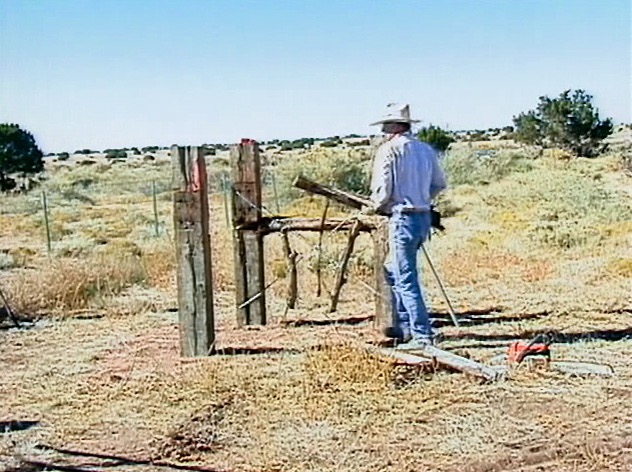 In an essay in the monograph for Disappearing Acts, multidisciplinary artist Ralph Lemon suggests that Nauman’s use of his white body as a supposedly neutral site of minimalist investigation during some of the toughest, most violent years of the civil rights and Vietnam War eras would’ve been an impossibility for an artist of color, and seems a willful affront to the zeitgeist of the sixties and seventies. Indeed, Nauman’s assertion of studio practice and physicality as artistic materials sometimes traverses into navel-gazing territory (it’s surprising not to see a piece about his actual navel anywhere), but plenty of pieces in this show open out into the world somewhat and let him breathe our same air. Sometimes almost literally, as in his book of photographs, L A Air (1970), featuring empty squares of oddly hued, polluted sky. 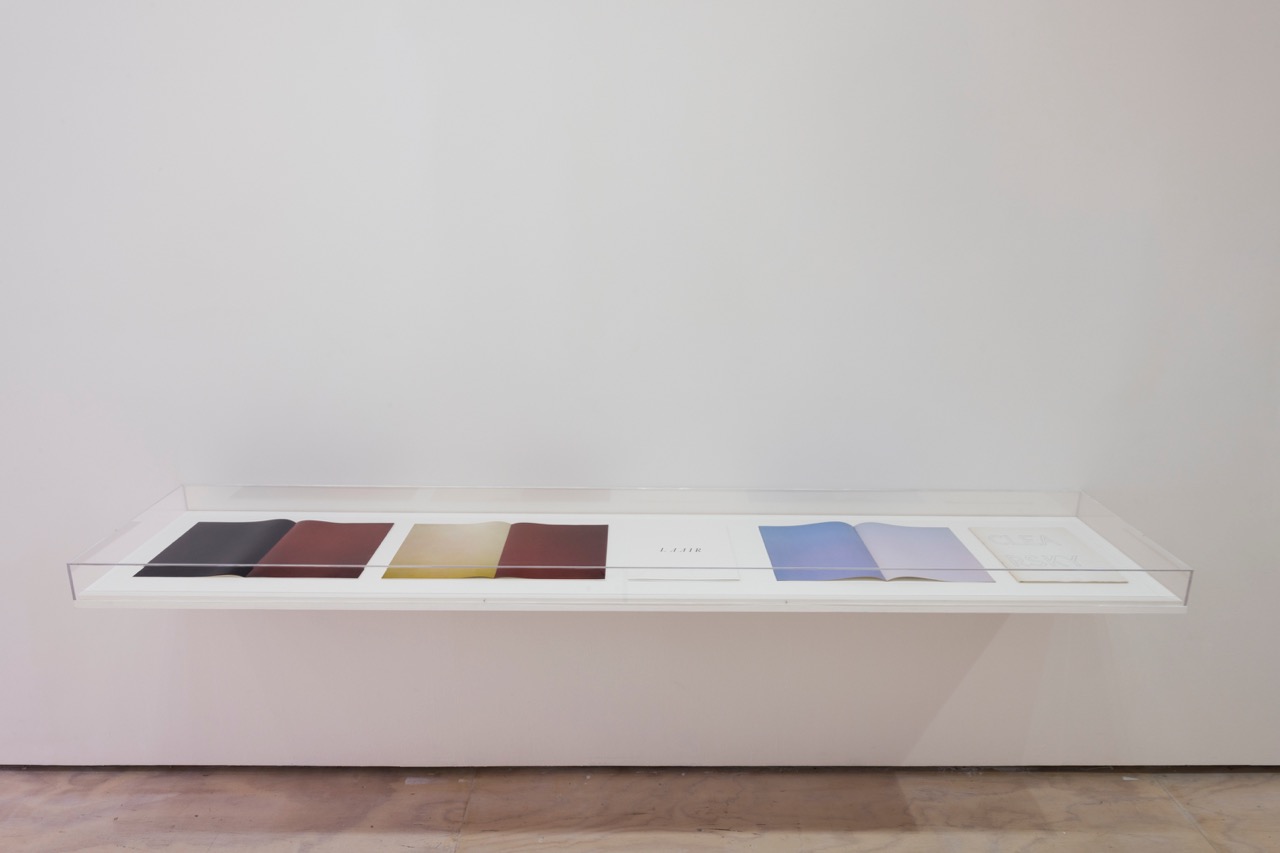 The version of Nauman I prefer, the one that runs counter both to his cowboy and his studio marionette, gets more space in the PS1 section of the show. The work there feels riskier: the curators have backloaded it with all the direct, weird, sexually explicit stuff, along with some new work that updates or signifies on previous works. See the PS1 show first and the MoMA exhibit looks tame and possibly extra, though that curatorial oomph never dissipates in either space—nearly every piece looks like a monumental pain in the ass to mount. Fountains! Horse-training machines! Taxidermy models stacked in an inverted pyramid! 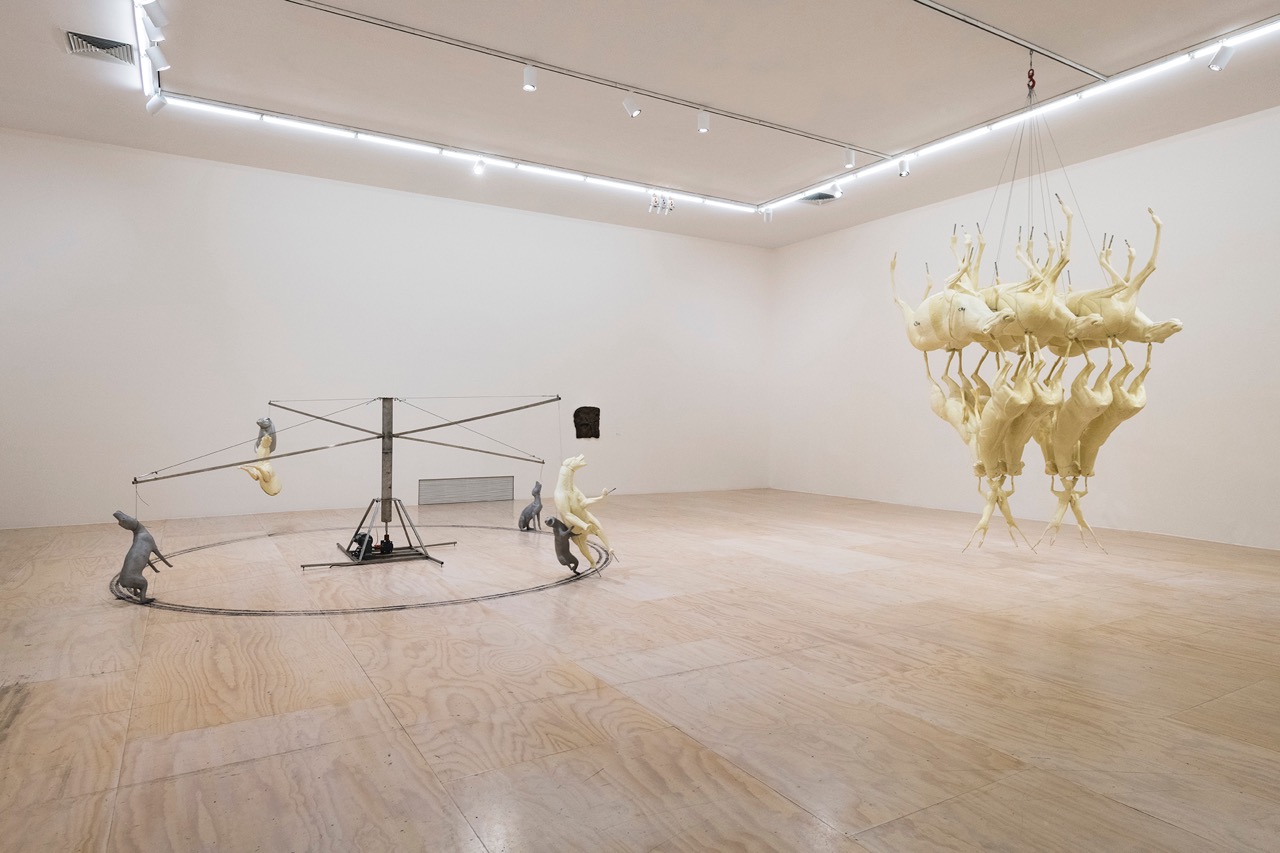 Your mileage will certainly vary, and an effective overview is nigh impossible here, but the work that thrills me most all seems to come from the mid-eighties. The pinnacle is Seven Figures (1985), a fifteen-foot-long neon sign depicting a polymorphously perverse daisy chain of outlined bodies (all of them bald) that flash back and forth in multiple colors while engaged in specific sexual activities. The jerky motion of the alternating images mimics the thrusting of fingers or phalluses into partners’ orifices. 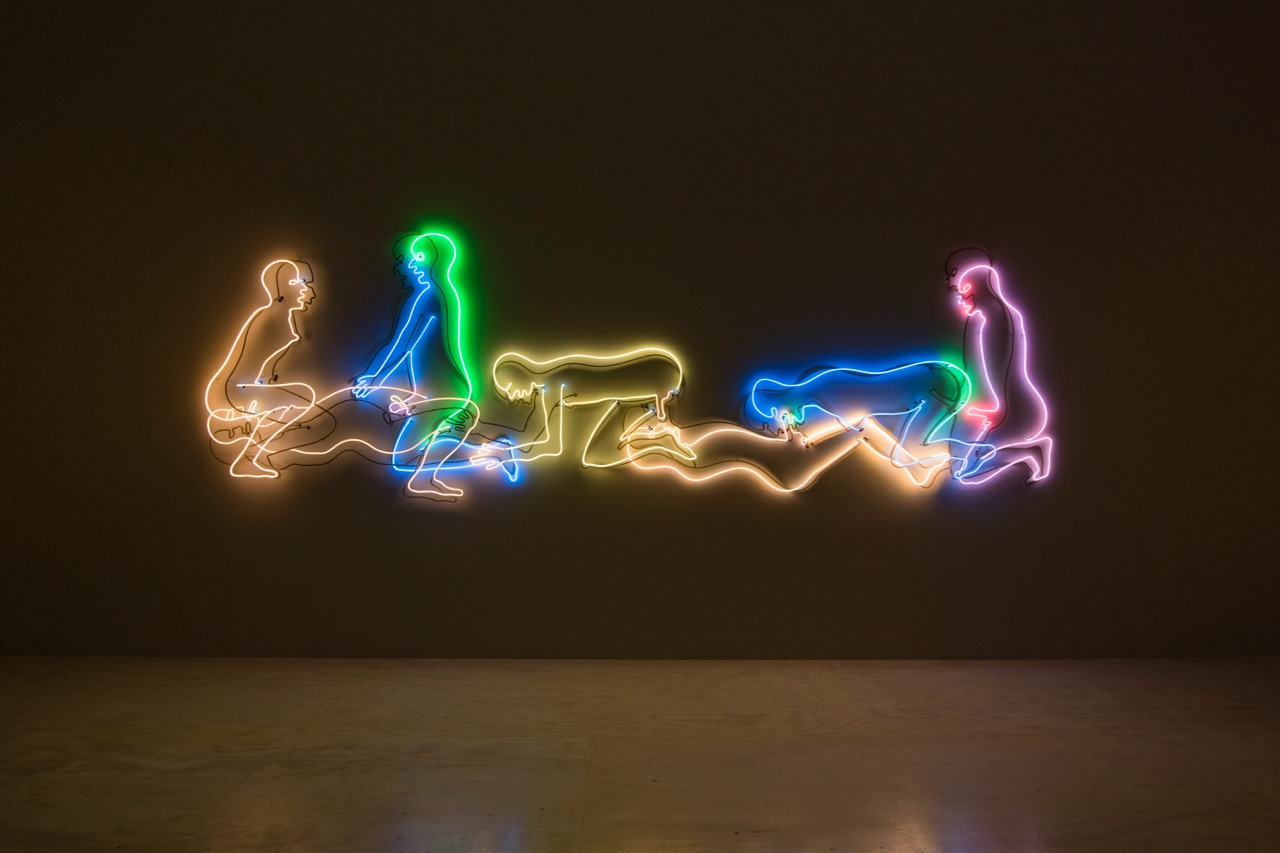 On display in a darkened room at PS1, with the rainbow colors diffusing across the walls and ceiling as it flickers like an inappropriate holiday decoration, Seven Figures is easily the most unselfconsciously beautiful piece in the show. It’s also, by virtue of its materials and explicit subject, in wonderfully bad taste—the shock value must have been gigantic in 1985; figurative work alone was déclassé then, let alone figures fucking.

This carnal carnival seems neither exploitative nor violent—if anything, it’s carefully orchestrated and jubilant. That Nauman made such a sex-positive and intersectional work just as the AIDS crisis got underway might once have been seen as tone deaf, exposing his indifference to current events, but Seven Figures now seems like a talisman against the death of sexual pleasure. The piece recalls more innocent moments, say, the 1970s, when one could view sex as a metaphor for politics, or as a type of politics. It’s almost as if he’s trying to atone for approaching the body as a neutral subject in the sixties. 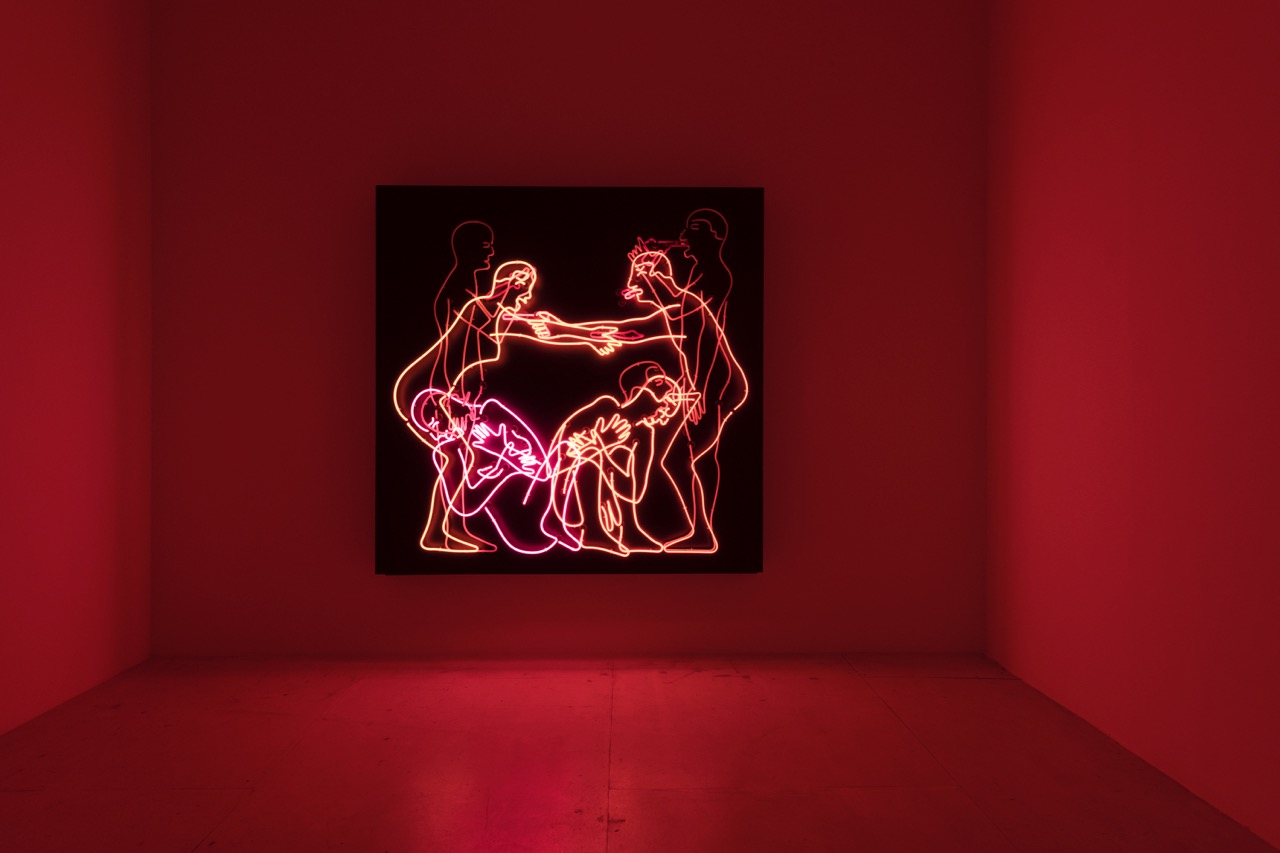 Other neon works at PS1, Sex and Death by Murder and Suicide and Hanged Man (both also from 1985), raise the stakes, adding death and violence to this period of Nauman’s work. The first shows four figures that, depending on which are lit, seem to perform oral sex, stab each other, or commit suicide; Hanged Man depicts the familiar stick figure from the game Hangman having a bad time with autoerotic asphyxiation. This kind of outrageous and pervy yet socially conscious irony rarely shows up elsewhere in Nauman’s oeuvre; some of his work really is just about washing his hands, despite any rhetoric art historians might lavish upon it. (He’s welcome to create work with such modest aims, of course, but we’re also welcome to be bored by it.) 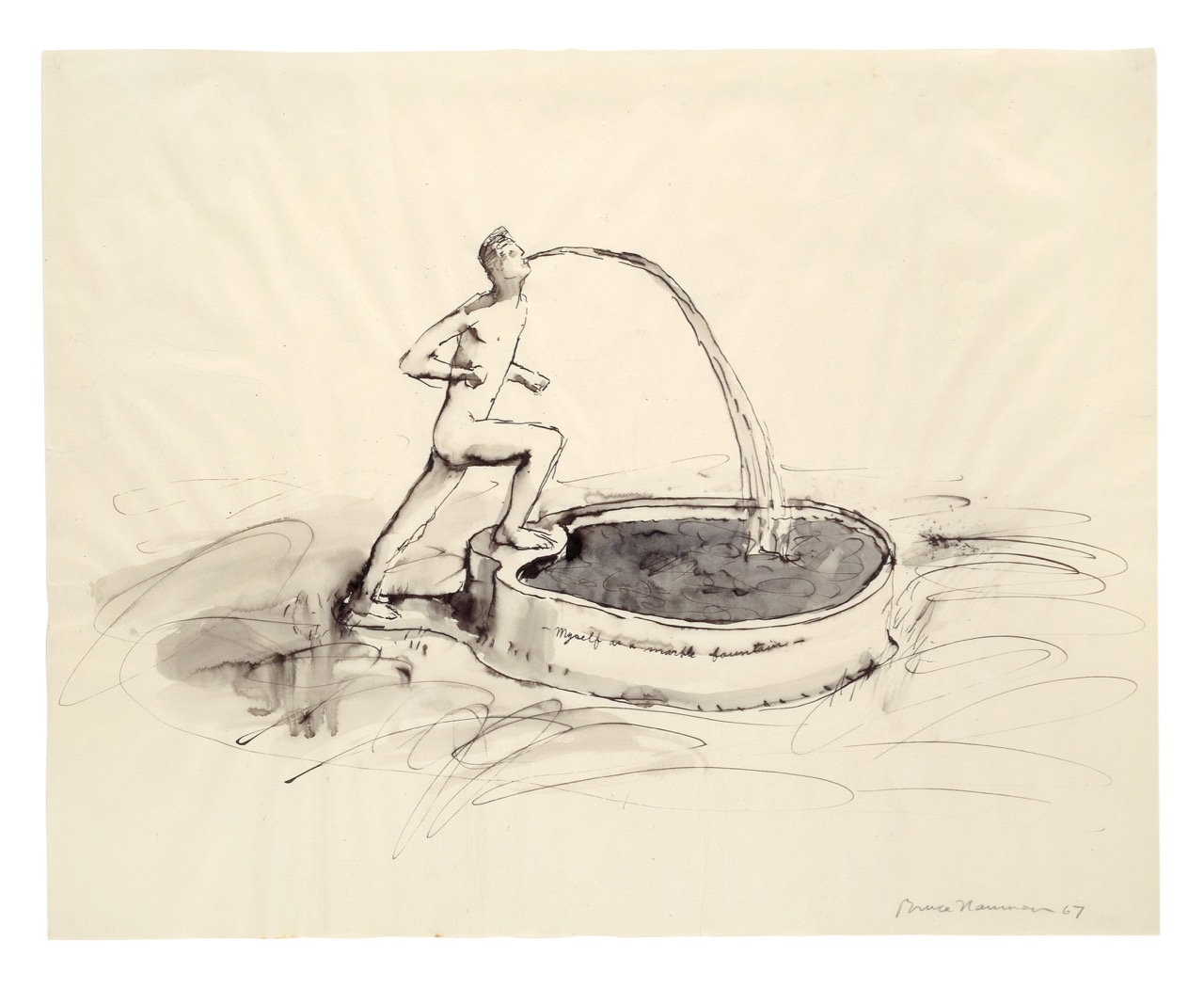 I feel almost embarrassed that I like Nauman’s drawings; they don’t challenge my presumptions about materials the way a fountain made of three epoxy-resin-and-fiberglass heads with water squirting out of them does (Three Heads Fountain, 2005). The drawings feel bold and painstaking even compared to some of the work that resulted from them. They’re often huge sketches for large-scale projects never realized, such as Untitled (Study for Sculpture) (1983), a wonderfully crude six-foot-high drawing of an oval tube whose outer surface would transform from a circle to a square to a triangle, or 4 Directions In & Out (1985), an almost cartoonish sketch envisioning a cross-shaped structure, a box with entrances on all sides that includes a hole into which one would presumably fall. Many works in Disappearing Acts stupefy you with their scale and/or difficulty, a high percentage bemuse you with their solipsism. The drawings split the difference by showing off the thoughtfulness involved in Nauman’s many processes—they’re the place where he and his curators find equal footing and no one disappears.