In Sheila Heti’s latest, a woman discovers new colors in the
grieving process. 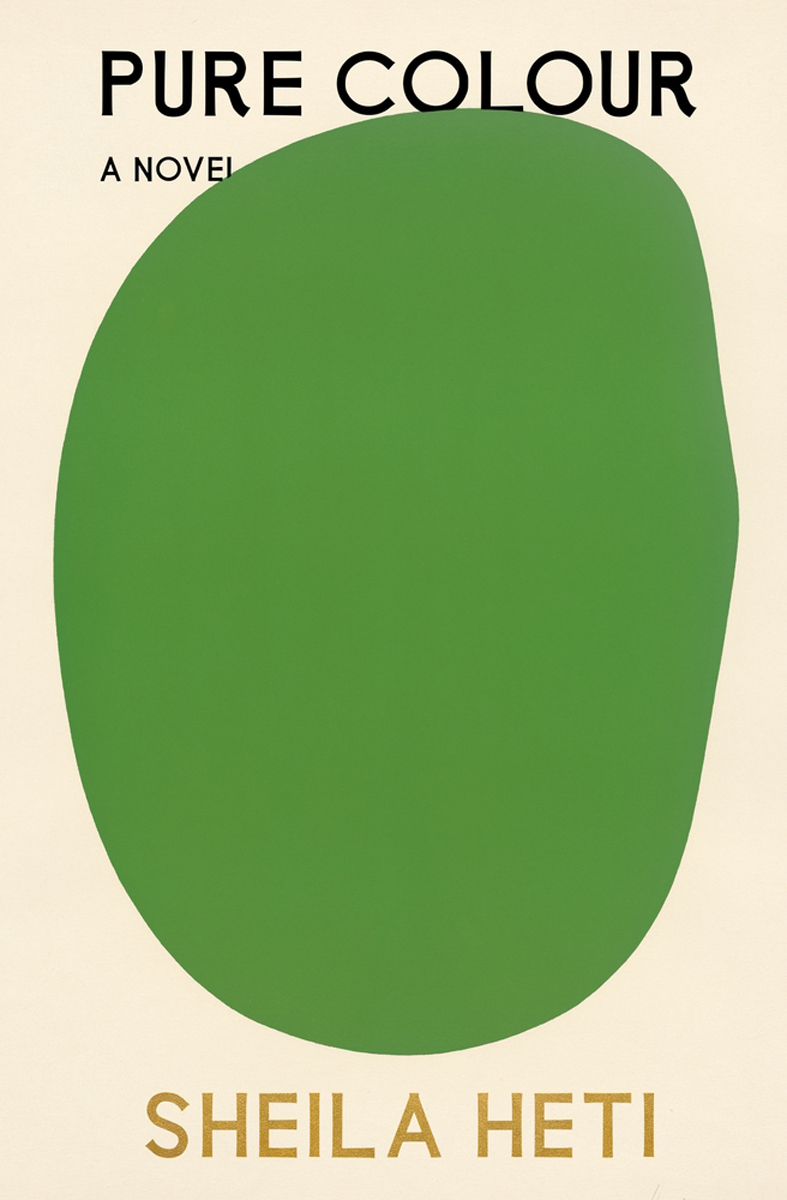 In Sheila Heti’s new novel, Pure Colour, the writing is warm, deft, and strange, but the characters are thin and the plot is too. What plot do you need, though, when the world is ending and God’s “first draft,” as she puts it here, failing? For the world Heti limns is a place of climate grief: “Seasons had become postmodern. . . . New things to die of were being added each day. We were angry all the time.” The language is fable-like, as our time is transformed into mythic time. Preparing for a second draft of creation, “God appears, splits, and manifests as three critics in the sky.” Perhaps the most radical version of the trinity yet.

Heti does “about” books, mock epics, quests to learn how to be an artist or live as one (How Should a Person Be, 2010) and whether or not to become a parent—while also an artist—in Motherhood (2018). These Montaigne-like searches come cloaked as novels and correlate to stages in a woman’s life. Pure Colour follows its protagonist Mira from college-age up, but is richest in her middle years, as if Heti most wanted to investigate this phase. With a parent’s dying (not to mention the world’s ending), the book might be called “how should a person grieve.” Mira’s father dies, and that loss is everything to her, to the book—and to me. I suspect to Heti as well. Her father died as she was writing, and the chapters dedicated to Mira’s mourning are Heti’s most profound.

The storyline is episodic and abrupt: Mira leaves home, goes to art-critic school (as if perhaps training to be a god). She meets the enigmatic Annie, a near stranger with whom all the other students are obsessed, partly because Annie is an orphan. Love ensues between Annie and Mira; love passes, time passes, friendship passes, father passes. Annie unexpectedly returns. Finally, Mira dies in Annie’s arms.

However central to the story Annie is, she feels like a device, brought in at key moments to advance Mira’s character or an idea in the novel, as if Annie were doubly orphaned—cut off from other connections in the book or her own motivations as a character. Sketched in a half page, her backstory has her growing up singing and dancing in an orphanage in a big US city. Little Orphan Annie perhaps? Is the suggestion an accident, a joke, or is it intentional? One detail that is revealed: in the orphanage the kids ate Mikes and Ikes. “What were those?” Heti writes. In the next line she ponders what it is to grow up without a parent, to be given up. The dissonance between these questions is jarring.

Annie feels all the flatter in comparison to Mira, whose bond to her father is closely drawn. In her youth Mira’s father vows to give her pure color, shiny pastilles with their “colour deep inside.” Although she’s unsure what these are exactly, her relationship with her father is chromatically rich. (When she is little, everything between them is “golden and green,” and her father’s last days are similarly vivid.) With his death, she finally grasps this pure color of his promise, the rich hues of our deepest moments in life. Losing him is “maroonish,” Heti writes. “She knows that the colour of that room is how they all felt, and that colour is not just a representation of the world, but of the feelings in a room, and the meaningfulness of a room in time, because in that colour, her father died. She had never seen that colour before. It was the colour of a father dying.” Heti has said that she prefers sparse writing with few descriptions, so that readers can picture themselves in scenes. The richness of the grieving, though, is in its specificity, no matter how minimal the writing. These passages stand in sharp contrast to the rest of the book.

After Mira’s father dies, he and Mira are conjoined in a leaf. Her grief is deeply psychedelic and captures how we bend time and space to be with our dead beloveds. (I relate to this more than I should, perhaps. I think my mom lives now in a plant on my kitchen counter.) As a leaf, Mira learns that plants are “the grateful recipients of all consciousness.” Heti renders father and daughter’s shared awareness in a collage of run-on dialogue between them.

In the leaf, they discuss asteroids and Oort clouds, all the things Mira frets over and her father says are unimportant. Love is what matters. It is everywhere, shared, he explains, by the animals, the oceans, everything . . . For all this radical transcendence, however, he quixotically comes out against therapists, the “fixers,” he calls them; he harbors unspecified grievances against them for interfering in how he raised Mira. Rather, he insists, we must embrace “family traditions.” His normative pronouncements go unquestioned by both Mira and Heti. In realist fiction, characters get to deflect their emotions onto the objects around them, making it clear how they feel without an author telling us directly (though displacing your sadness onto a pigeon or rock or any other object can be as strange as ending up in a tree with your dead dad). But Heti rejects such techniques, and Mira gets no space to disagree. Instead, Annie returns from nowhere, draws Mira back to the world from the leaf, and Annie is now a therapist, as if only to refute Dad. An intervention over Annie’s profession ensues and goes wrong. Mira tries to convince Annie to quit her job. Next, Mira’s bungalow goes up in flames. (Retribution? It happens the night of the confrontation but isn’t reported as causal.) Then time passes, and in a blue haze of more pure color, Mira does too. Annie has become a hospice worker.

Pure Colour’s true search is for the meaning of art in an age of grief, personal and global. Books are still relevant, Heti’s narrator declares early on; however, the most recent, from the past two decades, are not. They have yet to stand the test of time. In those sentences seems an ache for importance, for work to “prevail,” Heti writes. As her father dies, Mira thinks of art’s lasting—outlasting—us. But that’s impossible when the world is ending and eternity is no longer eternal. One of her father’s roles in the tree is to reassure Mira (and maybe Heti) about the future of art. (Spoiler: it won’t matter, but it is enough that it has mattered to us here in the world’s first draft.)

I am buoyed by these anxieties. I share them. I’m not sure what writer doesn’t. In Pure Colour, Manet appears as a pendant at the novel’s beginning and near the end. At criticism school, a pendulous professor derides Manet’s paintings. Later, in midlife, Mira meditates on his sketch of one lone asparagus stalk, a work that I love for its flaccid frailty and swirl of muted greens. Mira does too and wonders if, after his death, Manet’s spirit lives on in others. I think it does. Our breath contains the atoms of others and of all existence. For now, I await God’s second draft and maybe Heti’s as well. I want more on grief and art in the end times. I am still searching for how to be in them.

Jennifer Kabat’s books Gentian and Nightshining will be published by Milkweed Editions in 2024. Her writing has been in Best American Essays, Granta, BOMB, Harper’s and McSweeney’s. She lives in rural upstate New York and serves on her volunteer fire department.