From wheatfield to penis Napoleon: a half-century of work by the polymathic artist. 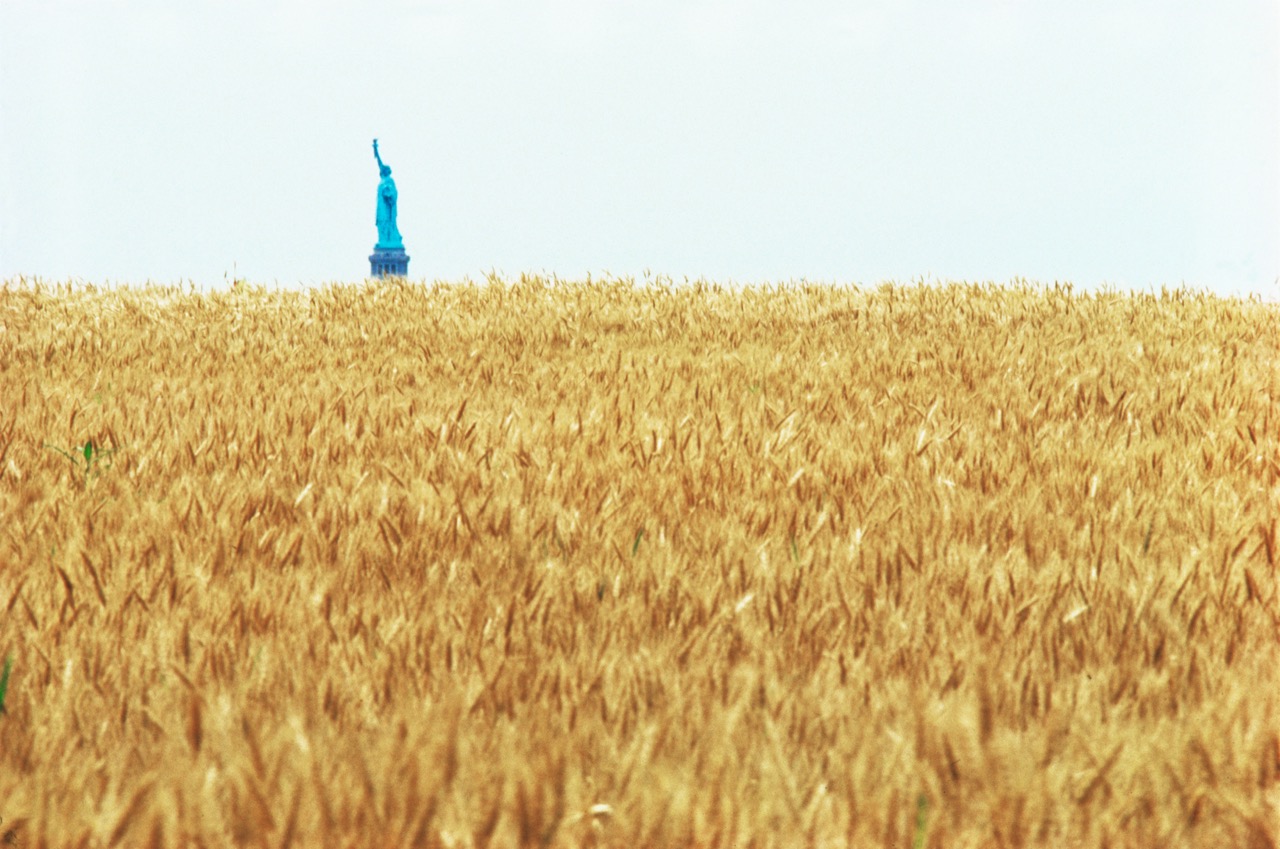 Even if you don’t know much about Agnes Denes, chances are you’ll know the photographs. Like the instantly recognizable images of those other site-specific landmarks from the postwar canon—think of Robert Smithson’s Spiral Jetty coiled in the flats of the Great Salt Lake or Walter De Maria’s Lightning Field poised beneath an electric New Mexico sky—the pictures documenting Denes’s most famous project, Wheatfield—A Confrontation, are icons of contemporary art history.

Many photos were made of Wheatfield during the five months it existed in the summer of 1982, but two are especially vivid in the way they bookend its presence and concerns. In the first, the Statue of Liberty is visible in the distance, rising above an implausible frame-filling horizon of golden wheat. The other shows a reverse vantage. Standing in the same field with the towers of Wall Street vaulting into an overcast sky behind her, the artist surveys her ripening crop with a long staff in her hand—an Old Testament prophetess transported to an Earth Day era, here to coax amber waves of grain from a rubble-strewn two-acre plot in the Battery Park landfill. Together, the images provide a succinct illustration of the central conceptual fascination of Denes’s long, polymathic career: those sites of inquiry and action where the nominal categories of nature and culture can be made to melt into each other in particularly evocative ways. 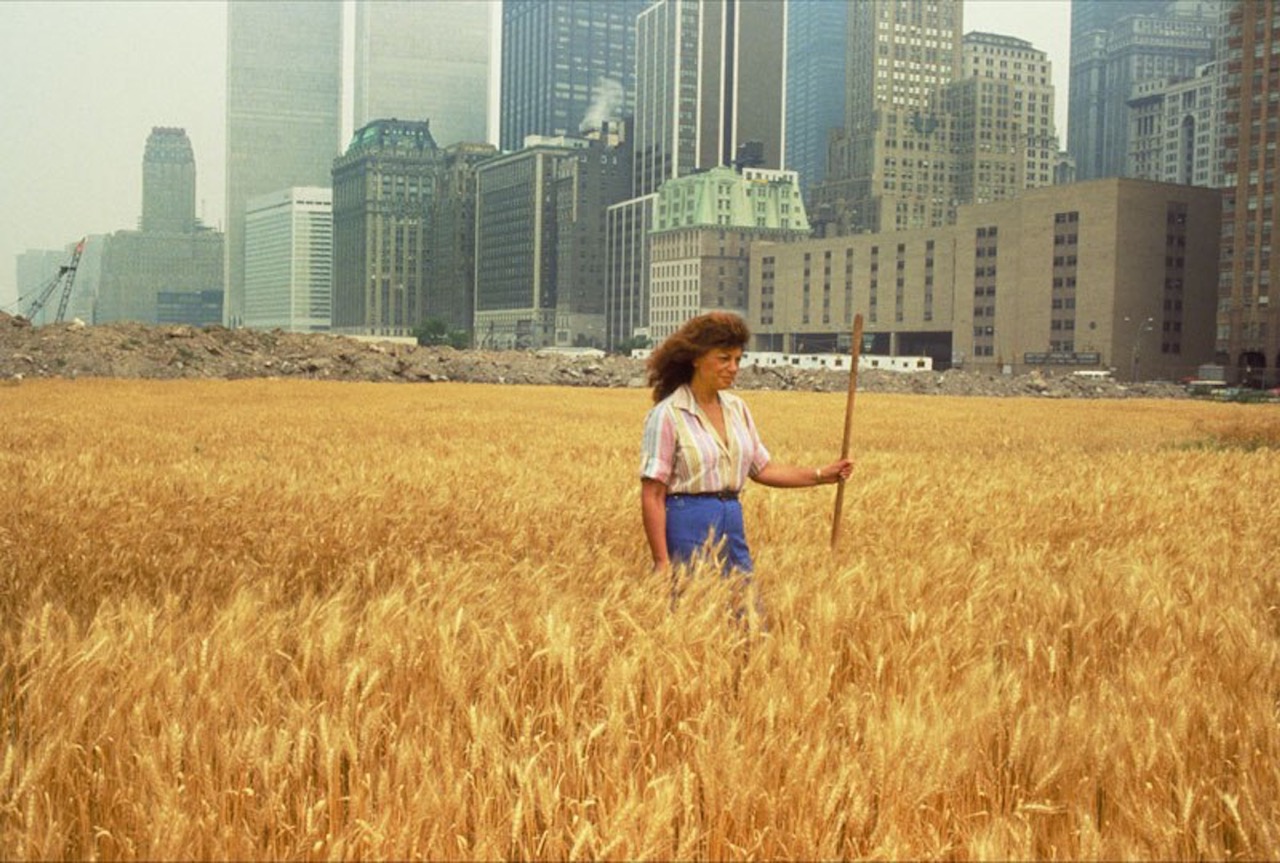 There is a certain serendipity, and no small amount of irony, in the fact that the eighty-eight-year-old Denes is receiving her most significant retrospective to date just a few dozen blocks up the Hudson from the site of her indelible piece of urban deterritorialization. The spot where the landfill was located is of course today’s Battery Park City, home to a complex of high-end condos, tony corporate headquarters, and luxury retail. Meanwhile, the institution responsible for organizing and hosting the current show is the Shed, the arts center embedded in Hudson Yards, that even more aristocratic complex of high-end condos, tony corporate headquarters, and luxury retail that’s been conglomerated across the last few years atop a platform that covers several dozen active Long Island Railroad tracks in the far-west 30s. And the parallels are not simply geographic and demographic. The “confrontational” attitude of Wheatfield, which the artist recently described as a “golden field of grain on land meant for the rich,” also suffuses the show. A half-century’s worth of propositions arguing for the interconnectedness of the systems that underlie both the natural world and the structures of human thought designed to understand it, Absolutes and Intermediates feels like a sharp thorn of care and conscience planted in the paw of an immense plutocratic beast. 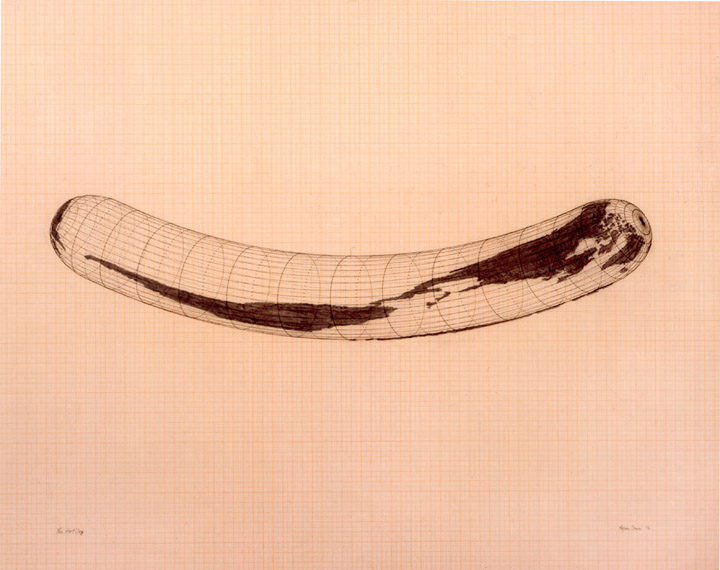 Spread across the building’s two primary exhibition galleries and featuring more than 150 works, the exhibition is demanding—so much so that at times it threatens to overwhelm viewers with its complexity and density. Thankfully, curator Emma Enderby organized the show around a series of rubrics that gather Denes’s assays into more easily digestible sequences without reining in their restless diversity. The first two of these, “The Philosophical Drawings” and “The Map Projections,” are by far the most intricate, their welter of works on paper concerned with, in the words of the artist’s 1969 manifesto, “defining the elusive / visualizing the invisible / communicating the incommunicable.” Animated by a kind of endlessly enthusiastic intellectual and makerly horror vacui, the first decade-and-a-half or so of Denes’s career is a blizzard of diagrams, illustrations, sketches, and charts that conjure, among a great many other things, the Earth isometrically transformed into an egg, a doughnut, a snail, and a hotdog; a comparison of the evolution of the human body and of machines, tools, and weapons; thought processes visualized in terms of crystallography; a “matrix of knowledge” that “anticipates a future in which . . . information will be dehydrated and coded for storage”; the “scale of being” proposed by the Neoplatonist philosopher Porphyry; linguistic cut-up experiments made by feeding Wittgenstein and Shakespeare into computers; and her “dictionary of strength,” a schemata including every word related to that concept that the artist found during a seven-year-long cover-to-cover reading of Webster’s Unabridged International Dictionary. 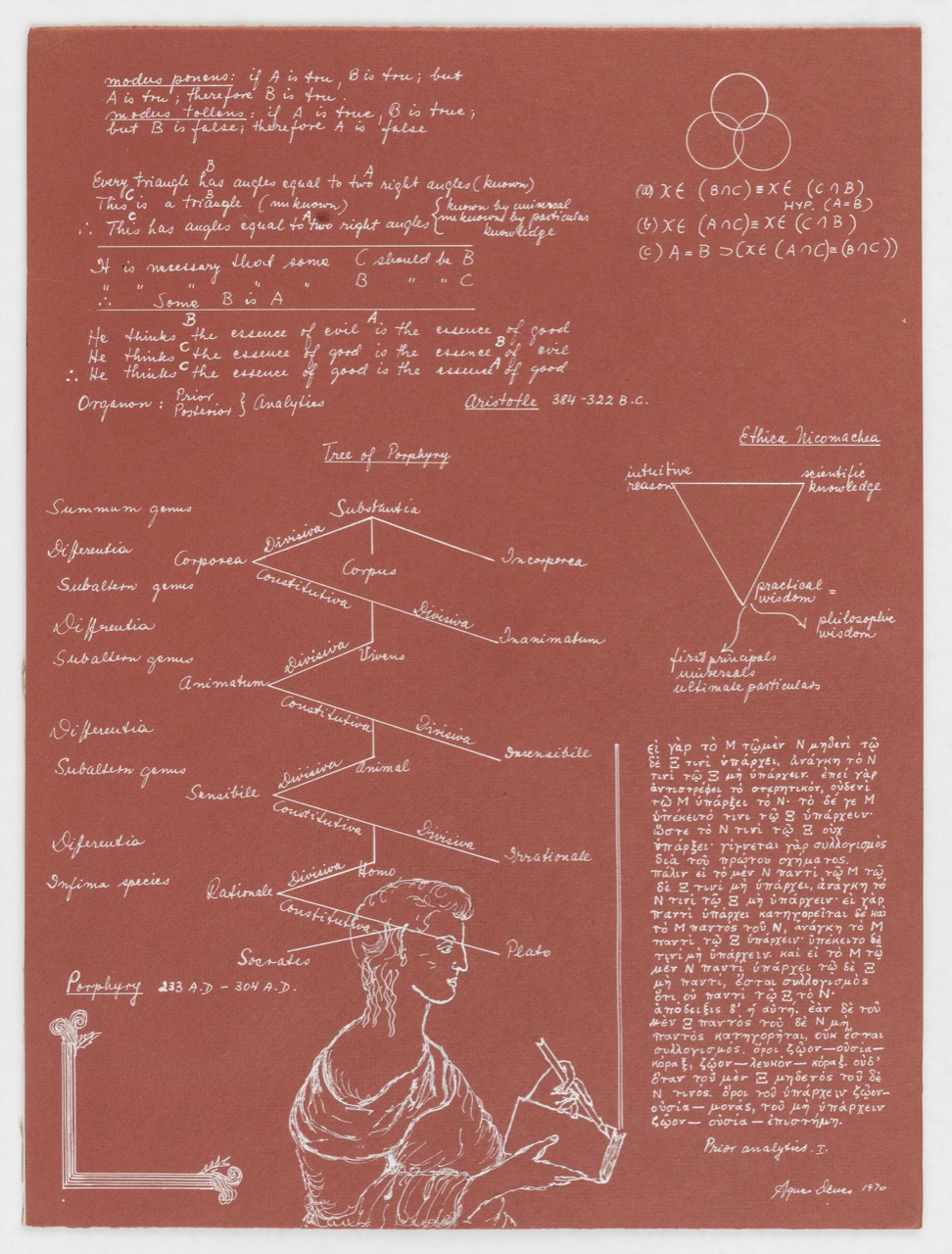 Superbly organized and beautifully drafted, Denes’s visualizations reward detailed examination, and even when their content is abstruse to the point of unintelligibility, the ritual devotion to inquiry they display lends them a remarkable degree of persuasiveness. This commitment to revealing the underlying causes of things has made Denes something of a pattern hunter, and Absolutes and Intermediates clearly announces that her preferred pattern, her spirit shape as it were, is the triangle. It features in one after another of the drawings and in certain small-scale sculptural pieces, and the entirety of the second-floor gallery is given over to her explorations of the form and especially its volumetric twin, the pyramid. Along with dozens of graceful drawings depicting the figure in various states of stasis and movement, the gallery also hosts a pair of new commissions for works that had theretofore been unrealized, including Model for Probability Pyramid—Study for Crystal Pyramid, a tapering seventeen-foot-high ziggurat of milky-white, compostable 3-D-printed blocks, based on a 1976 drawing, that seems to glow from within. 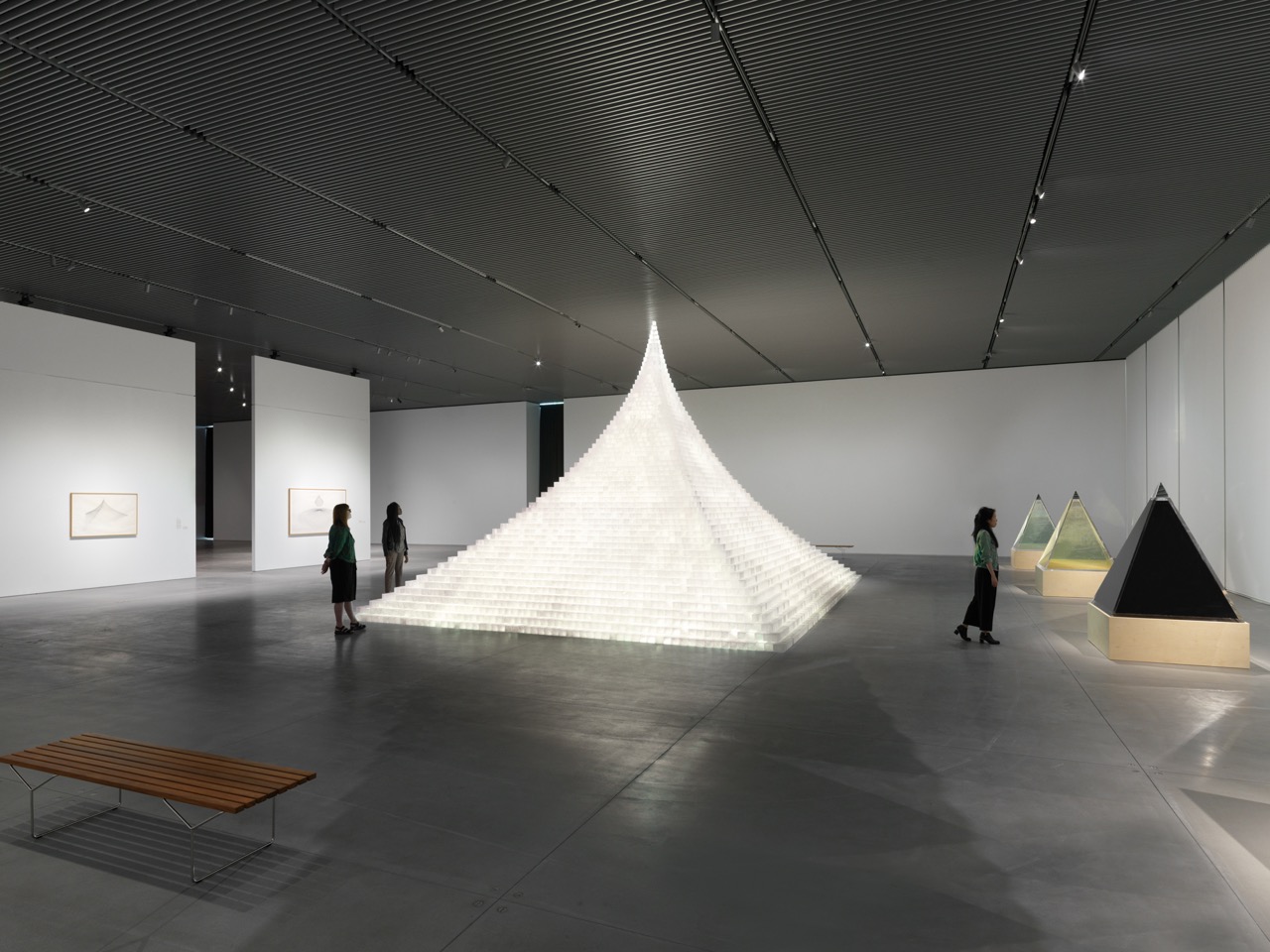 Naturally, there’s more: X-rays, microphotography, holography; plans for waterfront parks and barrier islands; lighthearted body prints in which the artist’s breast and her then-husband’s penis play the roles of a piece of fruit and a tricorn-sporting Napoleon; and Human Dust, a startling work from 1969 involving the calcareous remains of a man along with an imagined accounting of his life—the 56,000 meals he ate and the twenty-seven sexual partners he had, the 3,800 times he was misunderstood “when it mattered,” the seventeen people who loved him. But as Wheatfield so clearly demonstrates, Denes is at her very best as an artist when she’s given the opportunity to bring her ideas to life on a grand scale and for the broadest sort of public. And it’s in another planting project, her Tree Mountain–A Living Time Capsule—11,000 Trees, 11,000 People, 400 Years (1992–96), that the promise of her practice comes perhaps closest to its full realization. 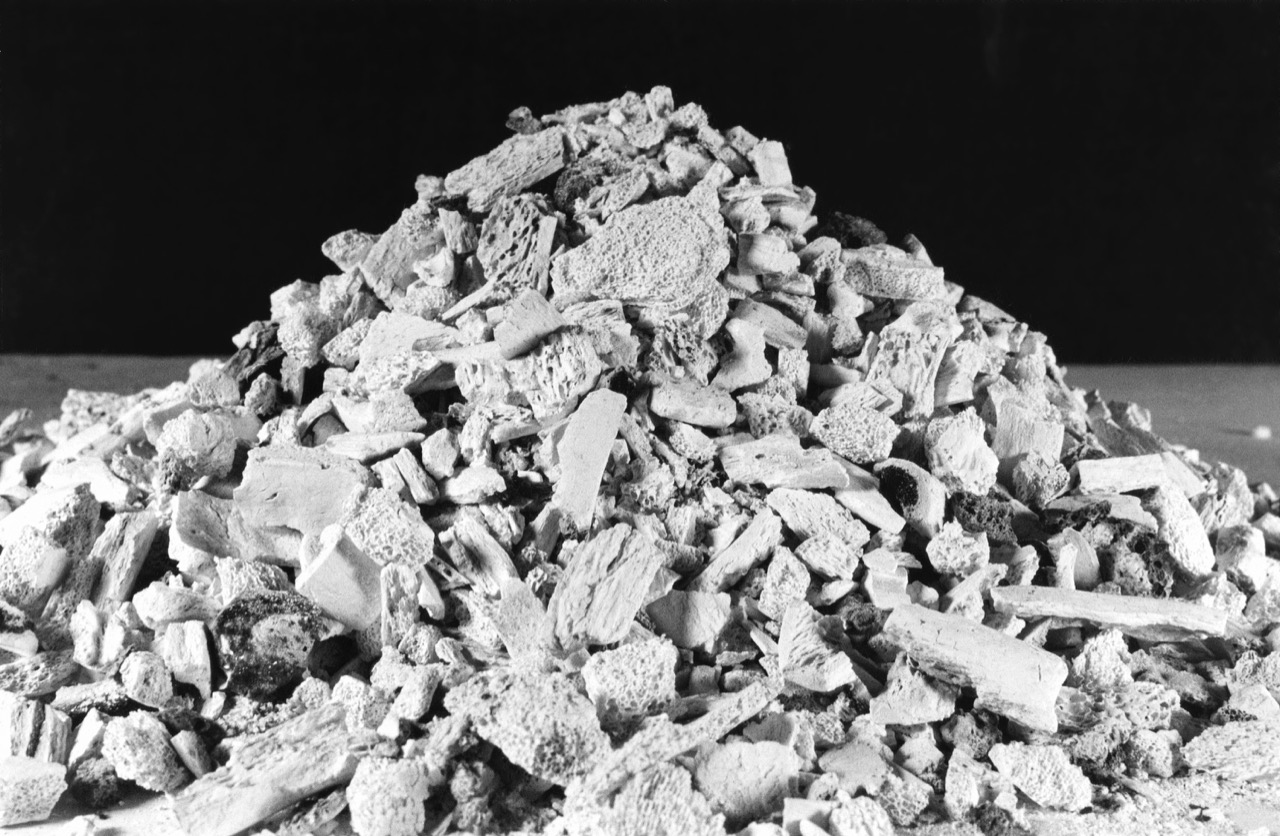 Presented here via drawings, models, and several documentary films, the work—a mini-forest of pines in a mounded spiral pattern like the seed head of a sunflower that Denes derived from the golden ratio—was created in a gravel pit outside of the town of Ylöjärvi in southwestern Finland with the help of volunteers who received perpetual legal title to the trees they planted. Denes is obviously aware that the centuries-long lifespan of the trees makes the work a quixotically optimistic gesture toward a future that she will never see, and that may or may not ever arrive at all. But as you watch her wipe away a tear after she tucks the first of the saplings into the dirt, reaching down and mussing its needles like a doting aunt while wishing it good luck, it’s clear she also knows that no matter the final outcome, the very fact of the attempt articulates an outlook as potent as it is unexpected in a work of contemporary art—hope.

Jeffrey Kastner is a New York–based writer and critic, and the senior editor of Cabinet magazine. His books include the edited volumes Land and Environmental Art (Phaidon) and Nature (MIT/Whitechapel), and he is coauthor, with Claire Lehmann, of Artists Who Make Books (Phaidon). A regular contributor to Artforum, his writing has appeared in publications including the Economist, frieze, the New Republic, and the New York Times, and in books and exhibition catalogues on artists such as David Altmejd, Ragnar Kjartansson, Tomas Saraceno, and Sarah Sze.