Of gravel born: in her film Ready Mix, the artist rests her gaze on concrete. 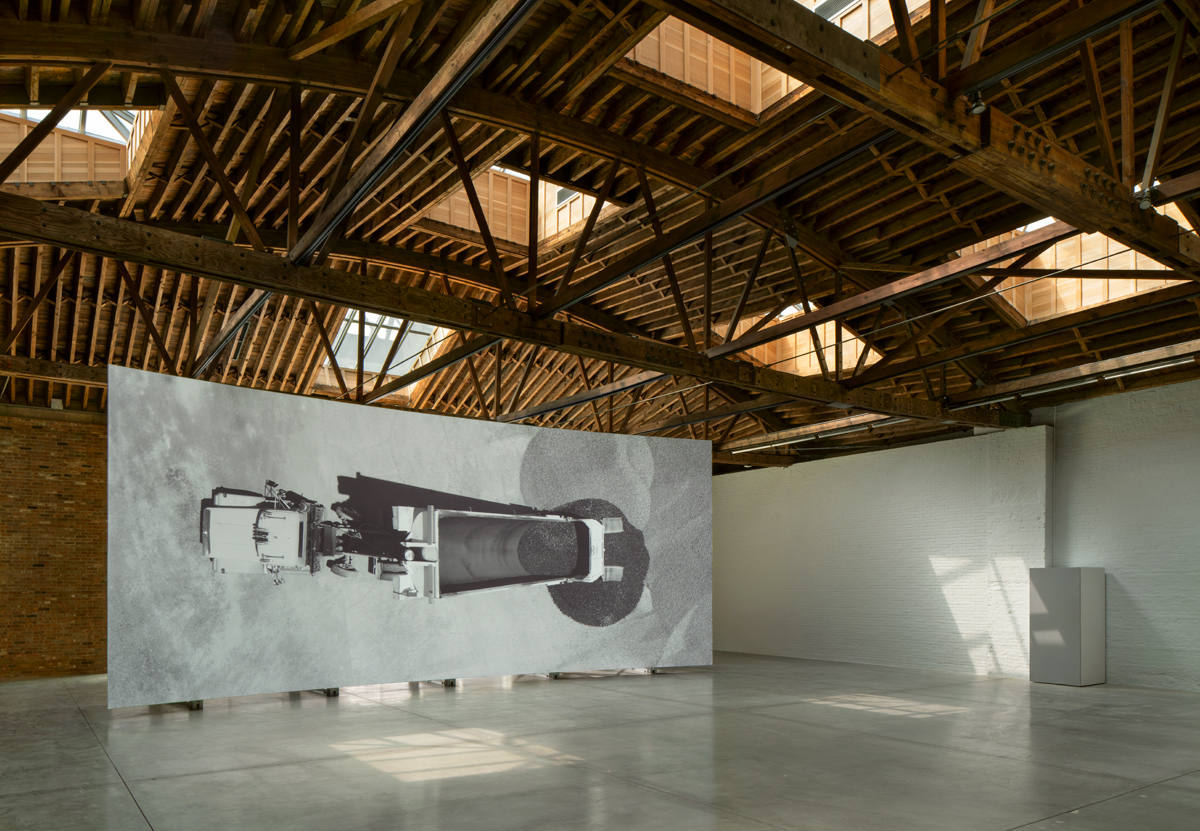 Richard Serra’s Hand Catching Lead (1968) is a kind of game. Over the course of the film’s three and a half minutes, lead scraps drop into the camera’s frame and a hand (presumably the artist’s) tries to grab them. While occasionally successful, the hand mostly misses, which is why the work is often read as an allegory for the creative process, at least as Serra saw it: material and action are central, but chance and failure are key, too. And yet if that’s the case, later interpreters of the work noted that Serra’s creative process is also abject and lowdown, even scatological, in part because the lead looks like feces, but also because, in a Freudian turn, it shows art’s unique ability to convert a turd into a gift.

I kept thinking about Hand Catching Lead as I watched Lucy Raven’s new film, Ready Mix (2021), a black-and-white study of concrete production, on view at the newly remodeled Dia Chelsea on the north side of West Twenty-Second Street. There’s something about the cool style and tough subject matter of the film that made my mind flit through the Dia pantheon, recalling all those artists the institution has patronized and funded and lionized since its founding in the 1970s. In addition to Serra, I thought about Robert Smithson and his Spiral Jetty (both the big coil in the Great Salt Lake and the noisy tractor-filled film he made for it), as well as Bernd and Hilla Becher’s photographs, with their gridded typologies of gas tanks and cooling towers. I also remembered works that stand alongside the Dia canon: Lewis Baltz’s New industrial Parks near Irvine, California (1974), Jean-Luc Godard’s Opération “béton” (1955), a portrait of a dam under construction (“a wall of concrete as tall as the Eiffel Tower”), and, digging deeper into the past, Charles Sheeler’s photographs of the Ford River Rouge plant (1927), with conveyors crisscrossing in front of a smokestack cathedral. In some way, all pictures of terrible progress.

Historically, Dia artists were mostly men who wondered about space, sometimes went out west, tested materials, worked on and against the land, and often came home with pictures because a lot of what they were making didn’t travel well. Much of this work was rough in quality and “defiant of our sense of the aesthetic object,” as Douglas Crimp once put it, but over time it’s been cleaned up into the style we now call Minimalist, a kind of postindustrial chic. Dia’s upstate headquarters in a former Nabisco factory in Beacon, New York, made an important contribution to this trend, and the look is reaffirmed here in the perfectly restored trusses of the Chelsea gallery’s warehouse ceiling. 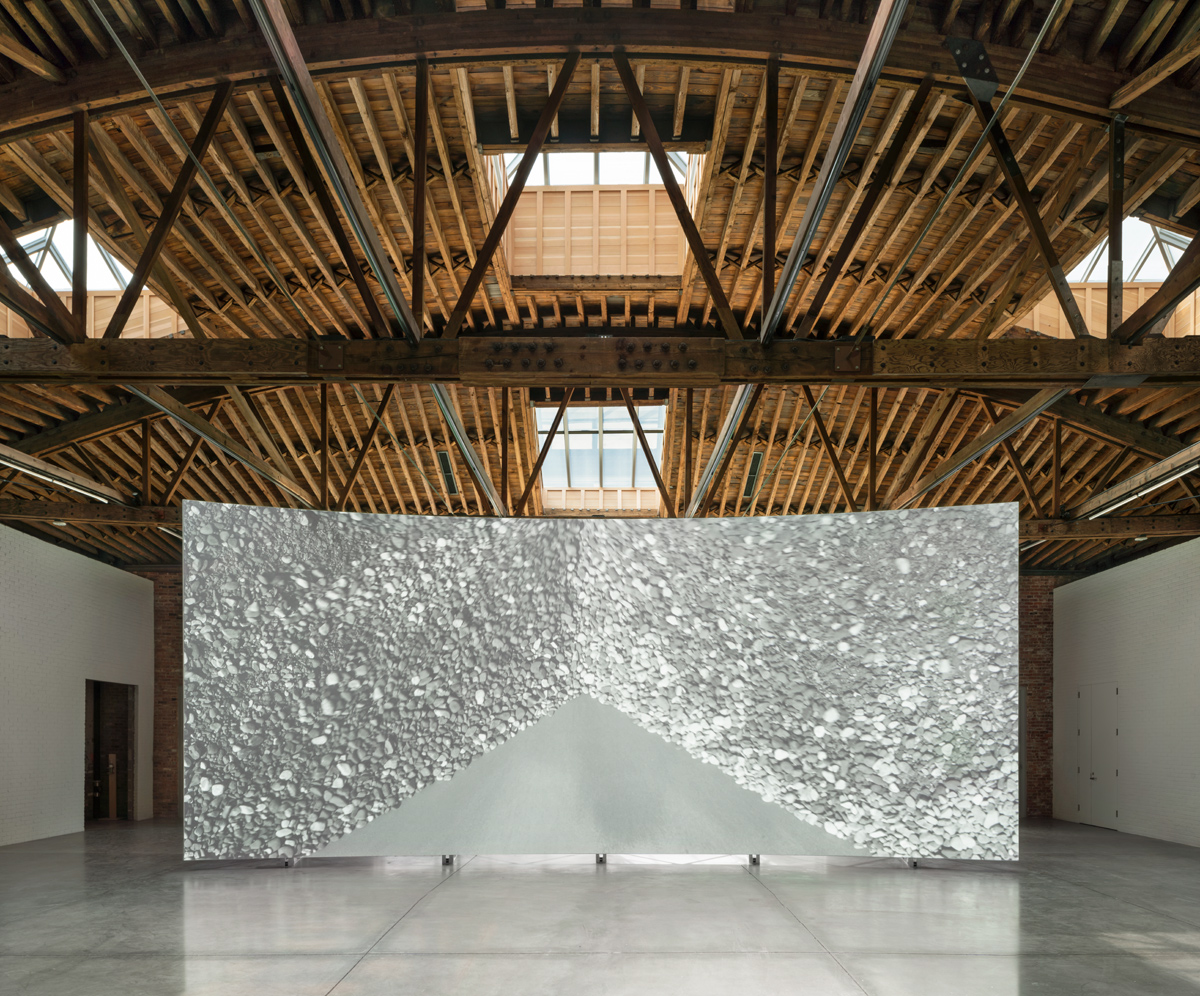 As I watched Raven’s film, which is extremely beautiful and projected on a massive curved screen, I contemplated this evolution, the passage of, say, Serra’s excremental film to his monumental Torqued Ellipse. What if Serra had caught the lead every time? Raven’s film is something like this—it is deeply satisfying, whereas much Postminimalist work is intentionally frustrating, and, like Serra’s later work, it has a knack for sublimating raw matter into something almost operatic, if not divine. Shot over the course of two years at an Idaho concrete plant, the film is full of chutes and cavities, deposits and evacuations. Gravel follows gravity, piling up into fantastic mounds. It’s exhilarating to watch it go despite, or perhaps because of, the way it calls to our lower drives. 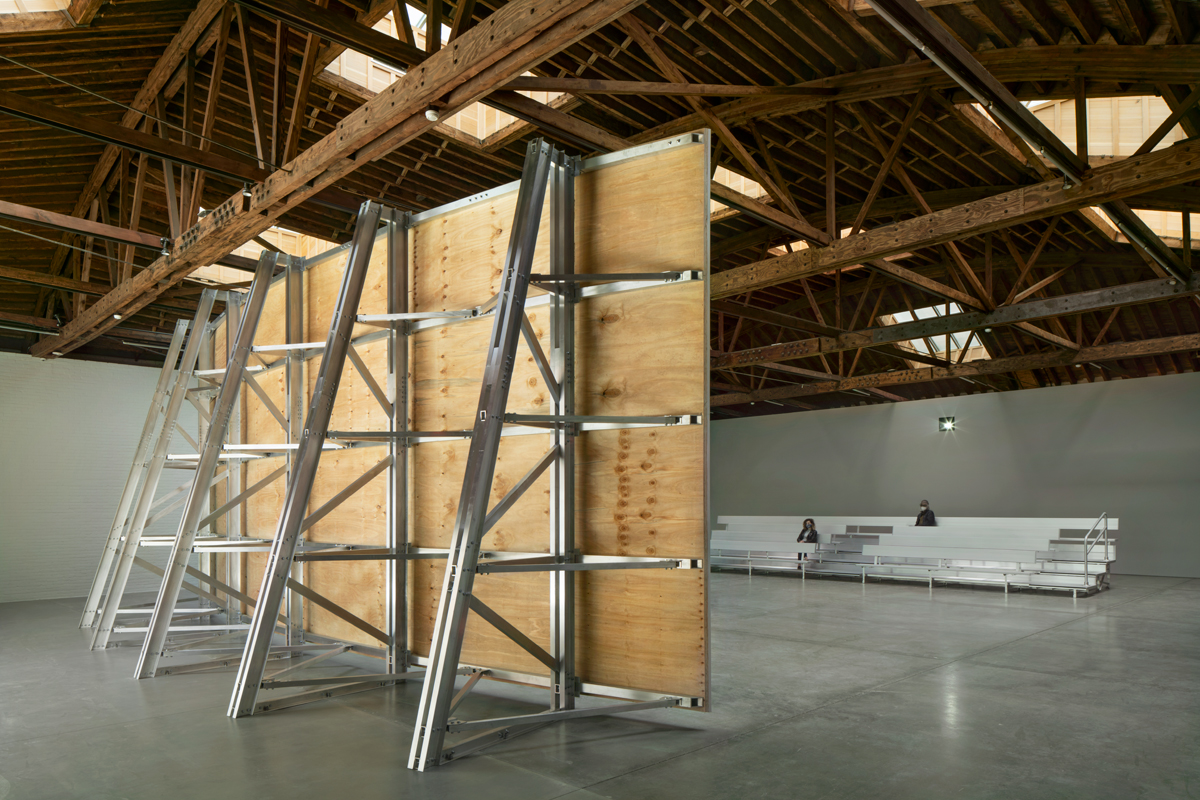 Raven’s film is forty-five minutes long, but since it plays on a loop and has no titles, you can enter at any time. And while you sit, depending on how long you sit (I did for a long time—there are athletic-style bleachers atop the cool concrete floors), you will see gorgeous things: stony static and what look like but are not lunar landscapes. Raven herself has referred to the film’s Frankenthaler and Pollock moments, and what we get is an image of industry as spectacularly sublime and mysteriously clean, full of work but little labor. It’s not simply what (or what’s not) pictured but how the film is shot: the immaculate aerial views, the bracing detail and precision optics. Some of the angles and pivots might remind viewers of the smooth moves of Raven’s Casters light sculptures (2021) in the exhibition’s other room. 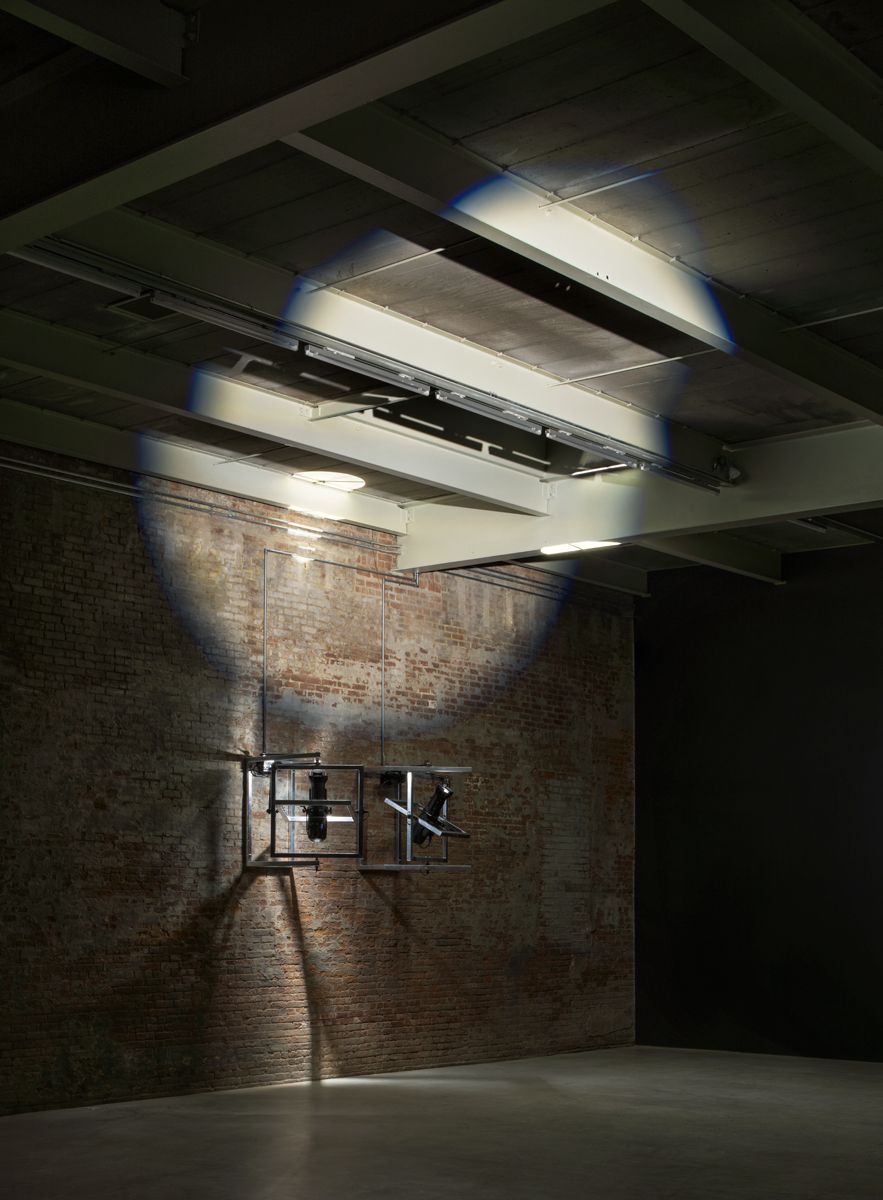 Ready Mix marks a departure for the artist, whose 2009 DIY color film China Town began the work continued here: that film also shows the life of a material, namely copper ore, dug up from a mine in the western United States and shipped to China for processing. (Made from a huge series of still photographs, China Town not only looks at production, it thematizes it in its composition, bouncing along in high modernist fashion.) In both films, people are almost incidental, the world dominated by something we might call Big Infrastructure. But where the earlier film has a narrative arc, showing a commodity’s extraction, transformation, and social life, Ready Mix is a looping compendium of surfaces and textures. At one point concrete bricks are stacked to form a barrier wall, an oblique nod, perhaps, to our own national debates about borders and identity, but such symbolism is quickly assimilated into a larger flow. 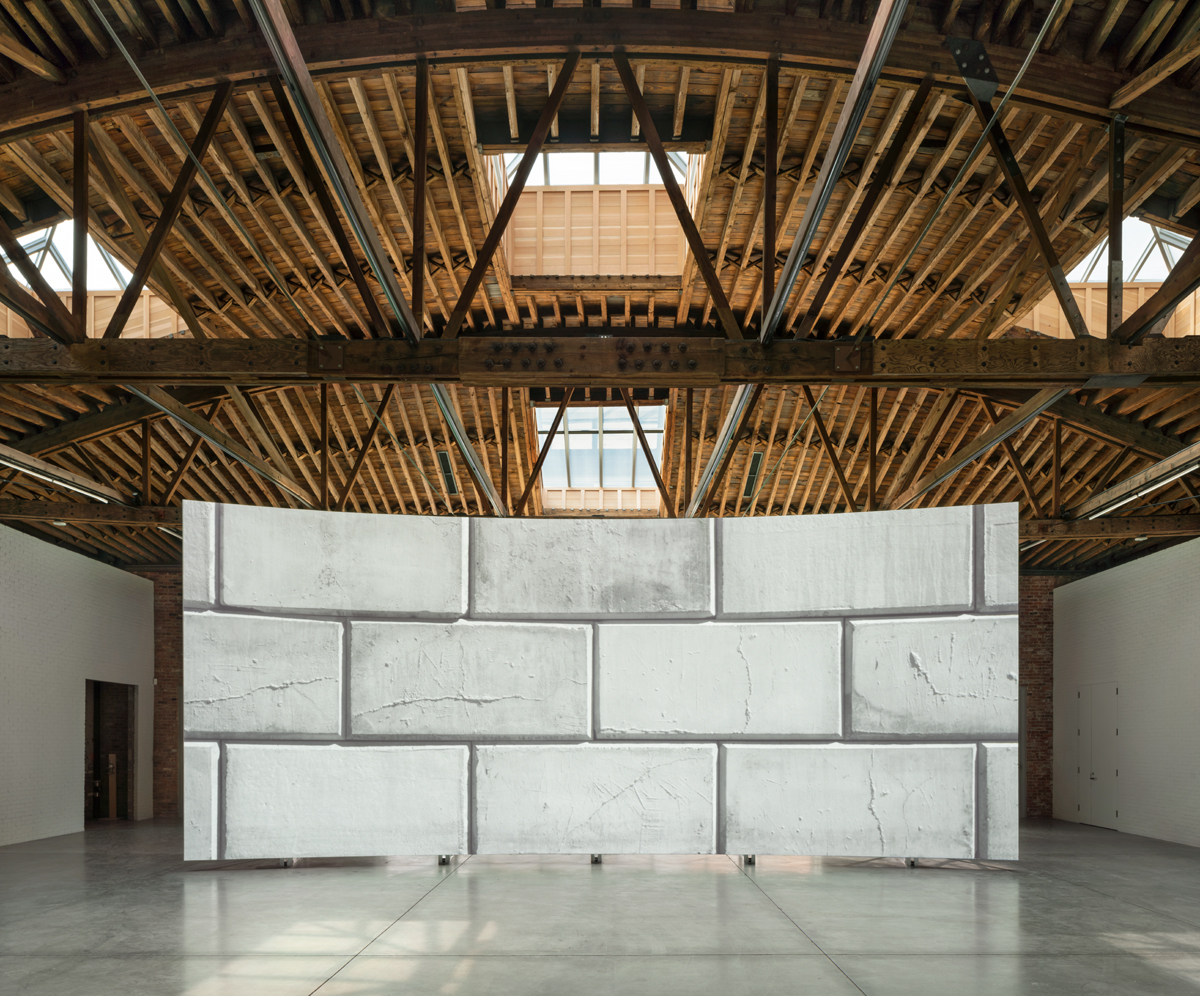 I was struck by the timing of Raven’s film as I watched it. (Everything is a matter of timing these days—everything is just off.) I came of age in the 2000s, and the Whitney Museum’s Robert Smithson retrospective in 2005 was a major event that shaped my canon: all I do now is try to figure out the world that has happened since, readjusting my blind spots and prejudices, attempting to understand why I fell in love and how I was seduced. (Smithson is a brilliant artist-writer. Raven is, too.) Raven’s film would have made perfect sense in that early aughts moment, but I wonder what the kids will make of it today. It looks like little else in the Chelsea galleries surrounding Dia, its anti-identitarian interests seemingly removed from the national conversation. It’s almost willfully against its time.

But maybe the work’s power derives from being out of step, from being just past, and thus reminding us that our own moment is historical, which is to say constructed, and that we try to make it as we see fit. Of course, Smithson would point to the second law of thermodynamics, insist on entropy, and tell us that the universe upends all human plans. But that anti-humanist fatalism now feels far away, replaced, perhaps, by the real dread of climate change. Indeed, concrete, which has been called the most destructive material on earth, plays an important part in our climate disaster, but crisis and failure here—what one might call lowness—are left to lurk offscreen.