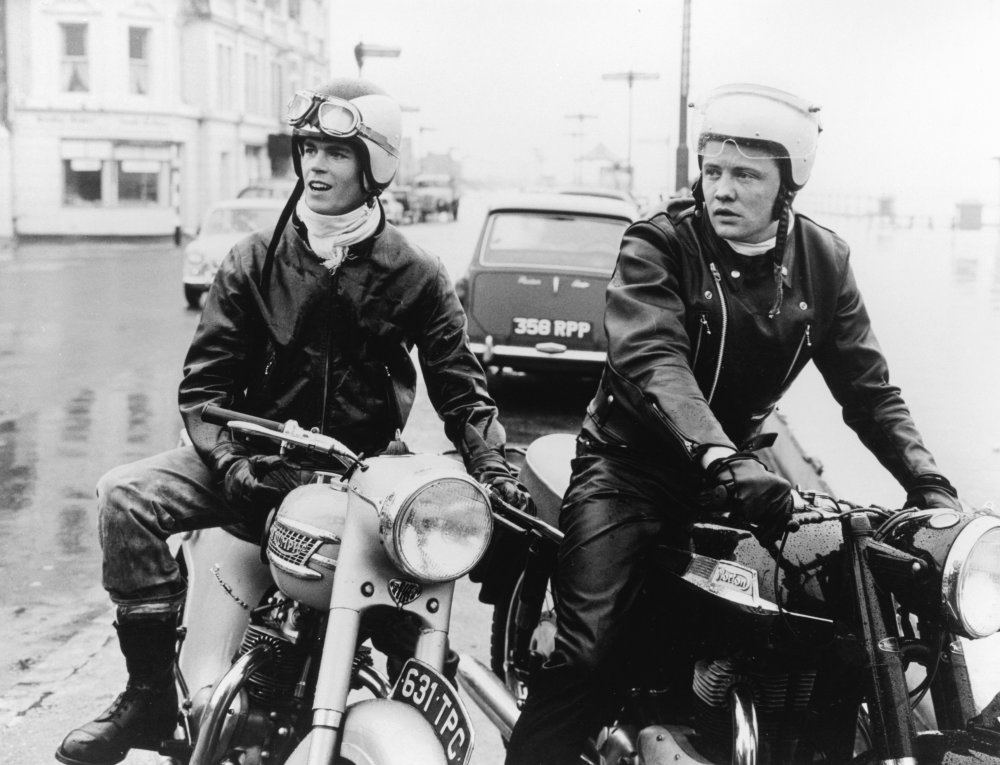 The Leather Boys, directed by Sidney J. Furie, available to watch via Metrograph through May 5, 2021

Who remembers the Angry Young Men? These days the very term evokes militant privilege, snarling entitlement, Capitol-stormers in Viking headdress. In late 1950s and early 1960s British cinema, though, it meant factory fodder getting uppity. Films such as Jack Clayton’s Room at the Top (1959) and Tony Richardson’s The Loneliness of the Long Distance Runner (1962) shared the outlaw ethos of the Marlon Brando–headlining The Wild One (“What are you rebelling against?” “Whaddaya got?”) and captured a strain of lower-class existentialism that was awkward and real. The griping of their angsty protagonists (antagonists?) was as liberating as the noise made by antiwar marchers or pirate-radio DJs.

The antiheroes of Angry Young Men cinema railed against the limited life opportunities available to them. Wired and frustrated, they especially chafed against girlfriends, wives, domesticity. Yet they never questioned heterosexuality itself. Not, at least, until The Leather Boys (1964), a relatively little-known film directed by Canadian expatriate Sidney J. Furie. Its title nods to the leather-clad, motorbike-riding “rockers” who were briefly infamous for their seaside battles against scooter-loving mod rivals. Perhaps this created the impression that the movie was mere trend-surfing teensploitation.

The Leather Boys was based on a 1961 novel written by Gillian Freeman under the pseudonym Eliot George. What its publisher Anthony Blond wanted, he had told her, was a working-class “Romeo and Romeo set in the South London suburbs.” The gleefully pulpy dust jacket of one edition describes the book as being about “motorcycle cowboys who live for fast machines and faster girls . . . It is also the story of Dick and Reggie and the strange, twisted love that developed between them.” 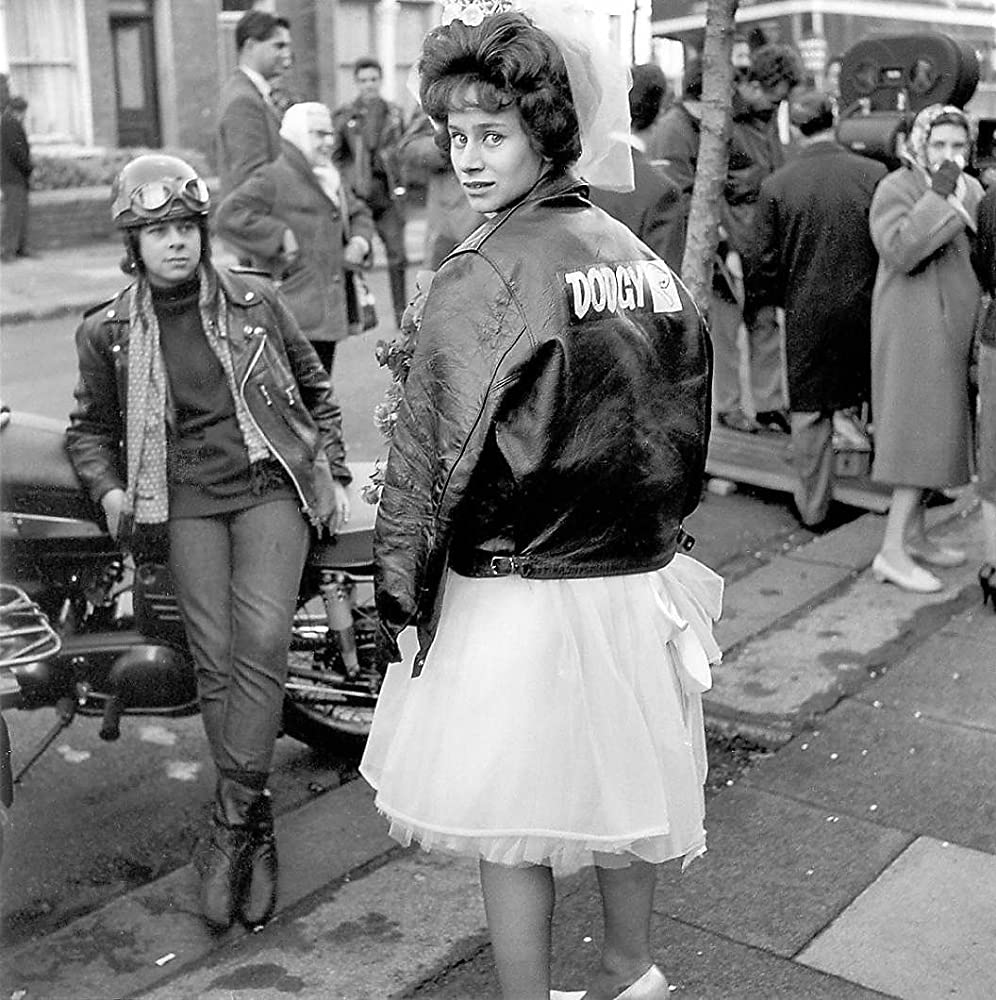 Furie’s version (which Freeman also scripted) is altogether less lurid. It pays greater attention to the character of Dot (Rita Tushingham, who made an unforgettable debut playing the lead in Richardson’s 1961 kitchen-sink drama A Taste of Honey), who marries Reggie (Colin Campbell) when she’s just sixteen. She has enormous eyes that are needy, accusing. Enormous fright-wig hair (that she later dyes peroxide blonde). An enormous mouth. She’s all appetite—hungry for food, glamour, bedroom action that Reggie can’t deliver. At times she’s almost grotesque, a shrew to be tamed. But Tushingham also portrays her as the free spirit her husband struggles to be, an angry young woman ravenous for a life her upbringing can’t deliver.

Campbell is a passable lead—handsome in strapping farmhand fashion, more convincing as a homebody than as a volatile speed merchant. His Reggie is the henpecked husband of countless British soap operas and cartoon strips. Then Pete (Dudley Sutton), as the novel’s Dick has been renamed, shows up at the biker café he haunts. He’s a different splash. A tall, sleepy cherub, a tickly Jean Genet. His accent is perky and indeterminate. He spends his days alongside Irish laborers burning rubbish in a strange no-man’s-land beside a rail track. Most of all, he’s fun. After an argument that leads to Dot living away from her hubby, Reggie invites homeless Pete to lodge with him. They share a bed. 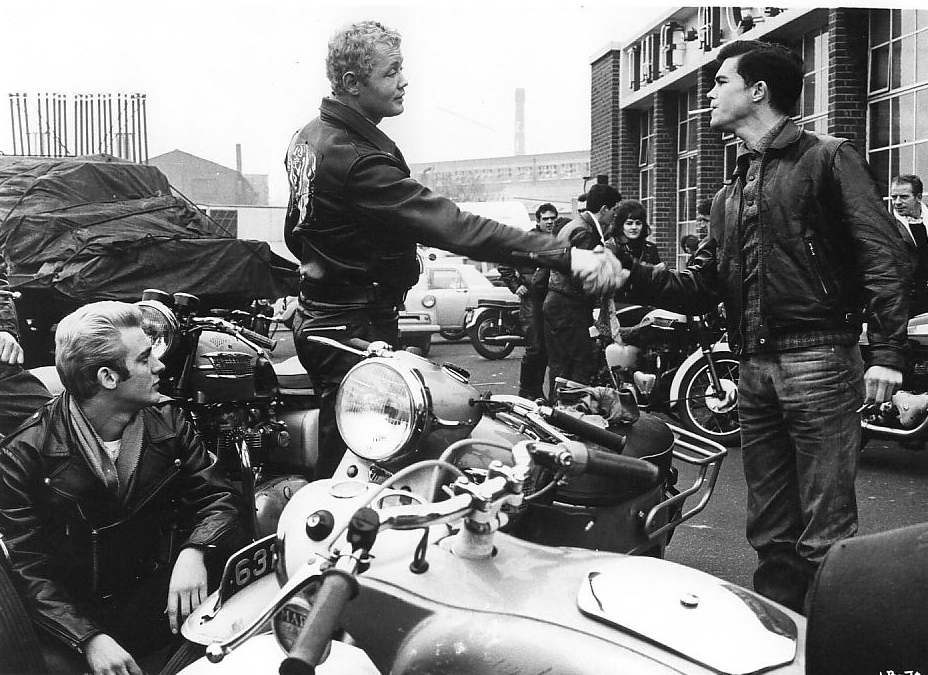 In Freeman’s novel, the pair kiss, have sex, and burgle buildings to pay for their escape from England. They’re assayed as a same-sex Bonnie and Clyde who revel in their deviancy. (“Years of seeing second-rate films and reading poorly written paperback novels made [Reggie] believe in the romantic comradeship between two men engaged in law-breaking,” Freeman writes.) The movie’s Reggie and Pete could never countenance anything so queer. In bed together, they most recall Walter Matthau and Jack Lemmon in The Odd Couple. 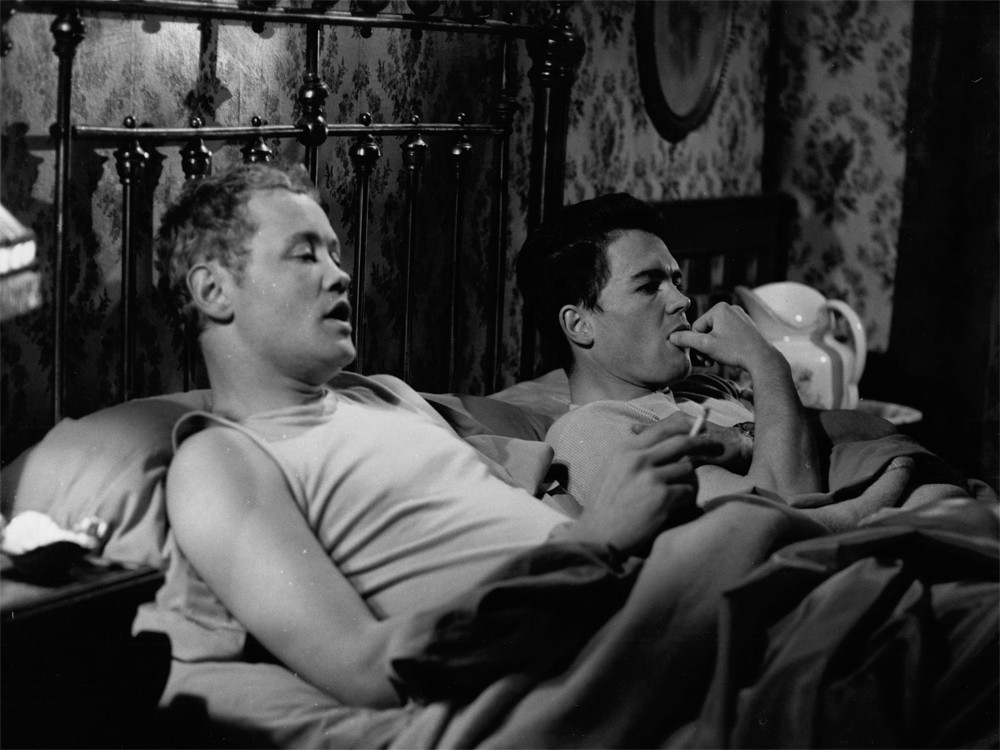 That love dares not speak its name in this film is both frustrating and appealing. Pete is full of cheeky-chappy sallies (“You look like a bunch of dead roses,” he tells Dot) and even dances with Reggie (“You look like a couple of queers,” spits Dot after she walks in on them doing so). Can Reggie, of two minds about whether or not to stay with Dot, hear himself when he cries out, “All I wanna be is a normal, married guy”? Is he genuinely clueless about his pal—obtuseness that lifts only after Pete takes him to an actual gay bar, a portside hangout for what used to be known as “sea queens”? Sometimes the past really was the past.

What The Leather Boys gets spot on is milieu. Its South London streets are monotonous brick barracks. So humdrum that the windows of local shops are devoted to displays of baked-bean tins. The terraced houses reek of boiled potatoes, unwashed curtains, and endless resentment. This is Morrissey land. Here every day is like Sunday. What hungry soul wouldn’t want to flee? Or hear the engines of motorbikes as siren calls? Pete tells Reggie that America is the answer. It’s a place where bars close at 4 a.m. and there are thirteen channels on TV. Anywhere will do, though. “Singapore or Japan or Australia,” cries Pete. “I just want to get away from it all,” adds Reggie.

Where they do go, in the film’s most thrilling sequence, is on a “burn up”—an eight-hundred-mile round trip up north to Edinburgh. The 1950s and 1960s saw a huge growth in motorway construction in the UK: millions were turned on to the magic of the high road, of being untethered from home, of being in between. Here, gloriously lensed by Gerald Gibbs, Reggie and Pete hurtle past cities and lakes, gliding sensuously around corners, through mist-drifts, rain, and the tar-black night. There’s no soundtrack and scant dialogue in these segments, just the exhilaration of skies and freedom, of geographies dissolving. At any moment the bikers might crash, but, at least for the duration of this race, they fear death less than the resumption of their normal lives.

The Leather Boys closes, as Angry Young Men movies often do, with paths not taken, endless roads to be walked alone. Reggie can’t be with Pete. He can’t be with Dot. He’s left South London, he no longer has his bike, he’s nowhere near America. But he’s experienced tremors and possibilities with Pete—feelings it’s hard to imagine him forgetting or consigning to the past. Is he doomed to live a lie? While the film was being made in 1963, thousands of men were still being convicted of “homosexual offences.” Sunday tabloids ran stories titled “How to Spot a Possible Homo.” The road to decriminalization would have felt frighteningly long.