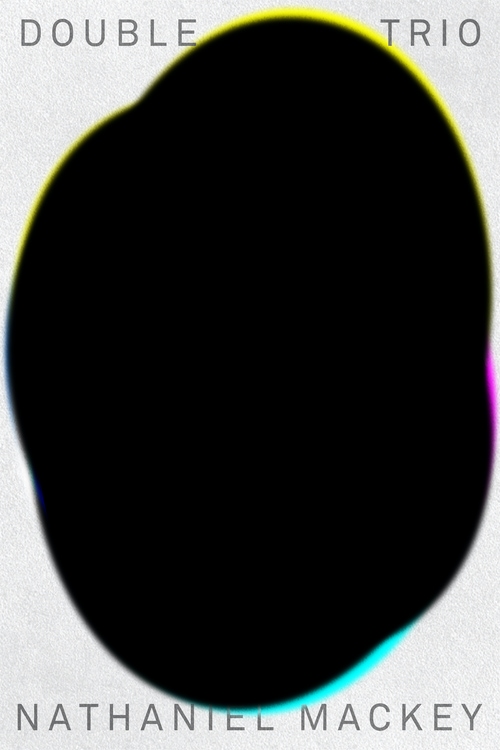 When one grows the nerve to delve into Nathaniel Mackey’s Double Trio, steadying one’s eyes and ears, he or she must be ready for the rhythm and the tonal attitude of Free Jazz. Of course, one may have argued in the past with squawking saxophones and brassy forays into bedlam. But it’s important to feel and know, to think about how Albert Ayler lived his music as a form of collective improvisation borrowed from the Holy Roller church; understanding that he created sheets of sound may change how one listens to and hears Coltrane, to understand what and how his music means. And one can hear Amiri Baraka saying, “It is science-fact that Sun-Ra is interested in, not science-fiction. It is evolution itself, and its fruits. God as evolution. The flow of is.” At this juncture, this may sound like a philosophical overlay for Double Trio.

Up front, the poet’s notes give us clues. He says this thousand-page collection is a “long song” divided into three “double books,” each corresponding to the last three movements heard in Coltrane’s 1966 album Meditations. The principle of free jazz radiates underneath this journey, as if an aesthetic score to Double Trio—tercets and quatrains working down the heft of sheaves (see, also, Mackey’s decision to release these volumes in a “box set”).

Double Trio is, furthermore, the latest installment in a thirty-five-years-long serial poem, which also comprises two parts, “Mu” and Song of the Andoumboulou. In an interview in the Paris Review, the poet refers to the Andoumboulou (a prehuman figure from Dogon legend) “as a failed form, a rough draft of humanity.” It is this idea of before-the-before where the speaker’s voyage begins. The reader then journeys with the poet through a desideratum where the Andoumboulou is drawn out of Dogon myth, becoming the speaker’s twin or go-between—conjuring sound outside of conscious meaning—a reckoning in the ghost-ridden provinces that wind and double back, spiraling on into a tangle neither poet nor reader seems to be able to navigate out of. The speaker is clearly drawn to this “unfinished” being, but is it only because of natural innocence and wonderment—or does it go back to a childhood of displacement in battered encampments?

The work is also a courtship of beings relegated to the other side of chance, in love songs narrated by one character, Anuncio, about two others, Zeno and Zenette. One realizes that Mackey’s Anuncio may have something to do with a Madonna lily that seems to have risen from the Andoumboulou’s landscape, ready to be initiated or violated: “Sweet Anuncia’s perfume / bore him along, burnt flower, / fruit smell and sweat compounded, / kum- / quat the hair whose rhyme it was . . .” Desire lives at the nexus of Double Trio, driving language down the pages, through an entangled unwind that plunges through white space, improvising personalized images wherever it goes, skipping over and traversing dead spaces, but still traveling on, and on. Perhaps it is the shape of this narrative that draws authentic life from the telling. Even as we lean in closer to mouth the music of words, informed by free jazz, one knows elemental logic exists even in experimental language, and even when plenitude or bulk doesn’t matter.

Mackey must have considered the difficulty of a personal language attempting to imitate music, without sacrificing the basic beauty of meaning. When a poet makes muse of Coltrane’s sheets of notes, he cannot forget he’s gigging with words, reaching for the coupling of imagery and sound. But when a musician bends a note, it is totally different than a poet breaking words on syllables as patterns and double entendres. True, such a tactic may look avant-garde on the page, but how does it sound in the mouth and ear? How does it weigh in the gut? In music, especially jazz shaped by improvisation, the typical player—not to mention one who practiced as much as fourteen hours straight—may insert an earned riff that pulls the sheet of notes together, whose repetition is almost hidden. One would have an almost impossible task to duplicate or say this on the page. When Baraka says “The flow of is,” do we hear a similar flow in Double Trio? Or does it risk an overflow? Is this thoughtful absorption or systematized disruption? Or is the trilogy’s structure a visual refrain?

When Shakespeare’s Caliban speaks poetry in The Tempest, we hear how meaning may be corrupted. In fact, that’s the dramatic point. Though a private language honed to create envy can only become the wordsmith’s conundrum: for many jazz listeners in the 1960s, free jazz left them dead in the water, suffering total bafflement. Some called it assault. Others called it sonic chaos. And a few saw some of the “free jazzers” perfecting a technique that created erasure; and, there are those who thought this signaled the death of jazz as we know it. Still others viewed free jazz as revolutionary.

Mackey’s Double Trio is both revolutionary and transportive. Without fail we are delivered into another time and place, another world. Still, at times one may find oneself without a compass, and without language to orient us. Surely, a poet can be cosmopolitan, but I do wonder—does the academic lingo in Double Trio disrupt the flow and short circuit the groove? What truly rises out of this philosophy of dares? Difficulty is not always genius; though originality often is. Where does this dare take us? Mired in verbal tangle, could obsession be the reason of Double Trio? Mackey’s elongated text structurally parallels the tonal obsession often built into free jazz. Worrying the tune. His gargantuan task—at times truly admirable—may depict simply the perils of influence.

Yusef Komunyakaa’s numerous books of poems include Talking Dirty to the Gods; Thieves of Paradise, a finalist for the National Book Critics Award; The Chameleon Couch, a finalist for the National Book Award; Neon Vernacular: New & Selected Poems 1977–1989, for which he received the Pulitzer Prize and the Kingsley Tufts Poetry Award; and his forthcoming Everyday Mojo Songs of Earth: New & Selected Poems 2001–2021. Komunyakaa’s prose is collected in Blue Notes: Essays, Interviews & Commentaries. He also co-edited The Jazz Poetry Anthology. In 1999, he was elected a Chancellor of the Academy of American Poets. He served as New York State Poet 2016–18.