In João Pedro Rodrigues’s 2000 film, garbage and the hounds of love. 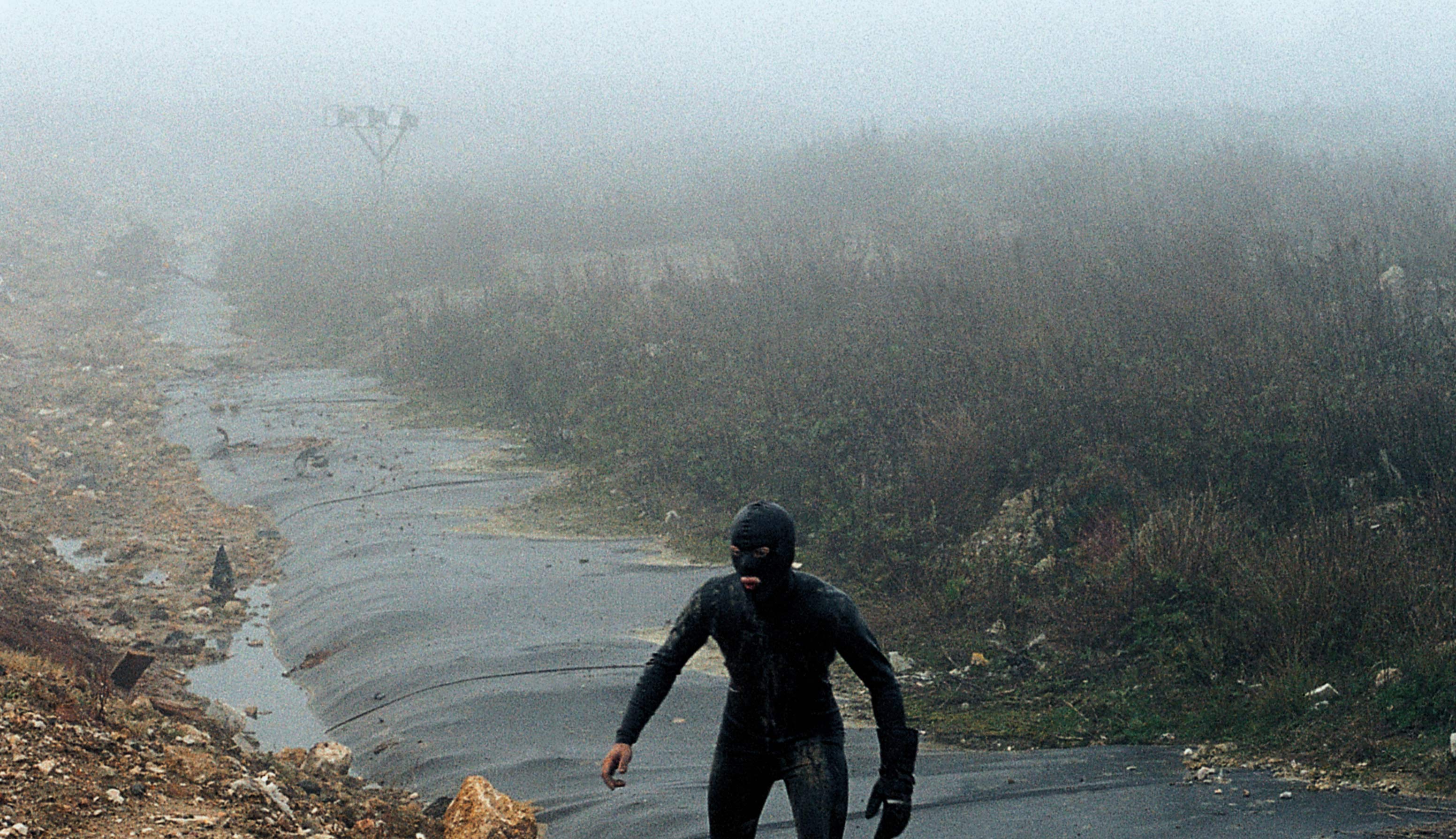 O Fantasma, directed by João Pedro Rodrigues, available on DVD from Strand Home Video and to stream via Strand Releasing on Amazon Prime

The first time I saw O Fantasma (2000, translated as “The Phantom”)—Portuguese filmmaker João Pedro Rodrigues’s debut feature about Sérgio (Ricardo Meneses), a kinky, queer garbageman who, despite being conventionally hot and having a tireless sex life, still suffers heartache—I was probably Sérgio’s age (a click shy of jailbait) and no less prone than he to fits of sadness caused by boys taunting me from inside my own head. A handsome boy I never saw again invited me to his dorm room to watch Rodrigues’s mostly silent, moody film—which I did, sitting in motionless agony, elbow-to-elbow with my host, while trying to parse Sérgio’s feral, nonverbal interactions with the humans and other creatures around him. Licking, sniffing, or rubbing signals the beefcake’s arousal, and he directs predatory stares at those he wishes to bed. But when he’s alone with Lorde, the sanitation service’s resident hound, Sérgio relaxes, mirroring the pup’s carefree movements.

The shock and awe of having a human body in an animal world is a central preoccupation for Rodrigues, who studied biology before switching to film at Lisbon’s Escola Superior de Teatro e Cinema under the tutelage of the still relatively unknown Portuguese poet and documentary filmmaker António Reis. Rodrigues’s most recent release, The Ornithologist (2016), also has at its center the allusive field of vision of a solitary male character, a birdwatcher named Fernando (Paul Hamy), who undergoes a wayward, religious odyssey in the forest of northern Portugal, the region most associated with Reis. Yet the lush, sun-dappled landscapes of The Ornithologist are a visual inversion of the mise-en-scène of O Fantasma, a sordid city-symphony, with elements of science fiction, about wanting to become garbage. Shot mainly at night, under streetlamps where available, and with nonprofessional actors, O Fantasma abounds in blurs and shadows that muddle the physical boundaries of sentient beings. Prior to shooting, Rodrigues spent six months with the employees of a waste-management site in northern Lisbon, familiarizing himself with their day-to-day operations and the routines of the city’s working class, themselves regarded by the capital’s policymakers as refuse. 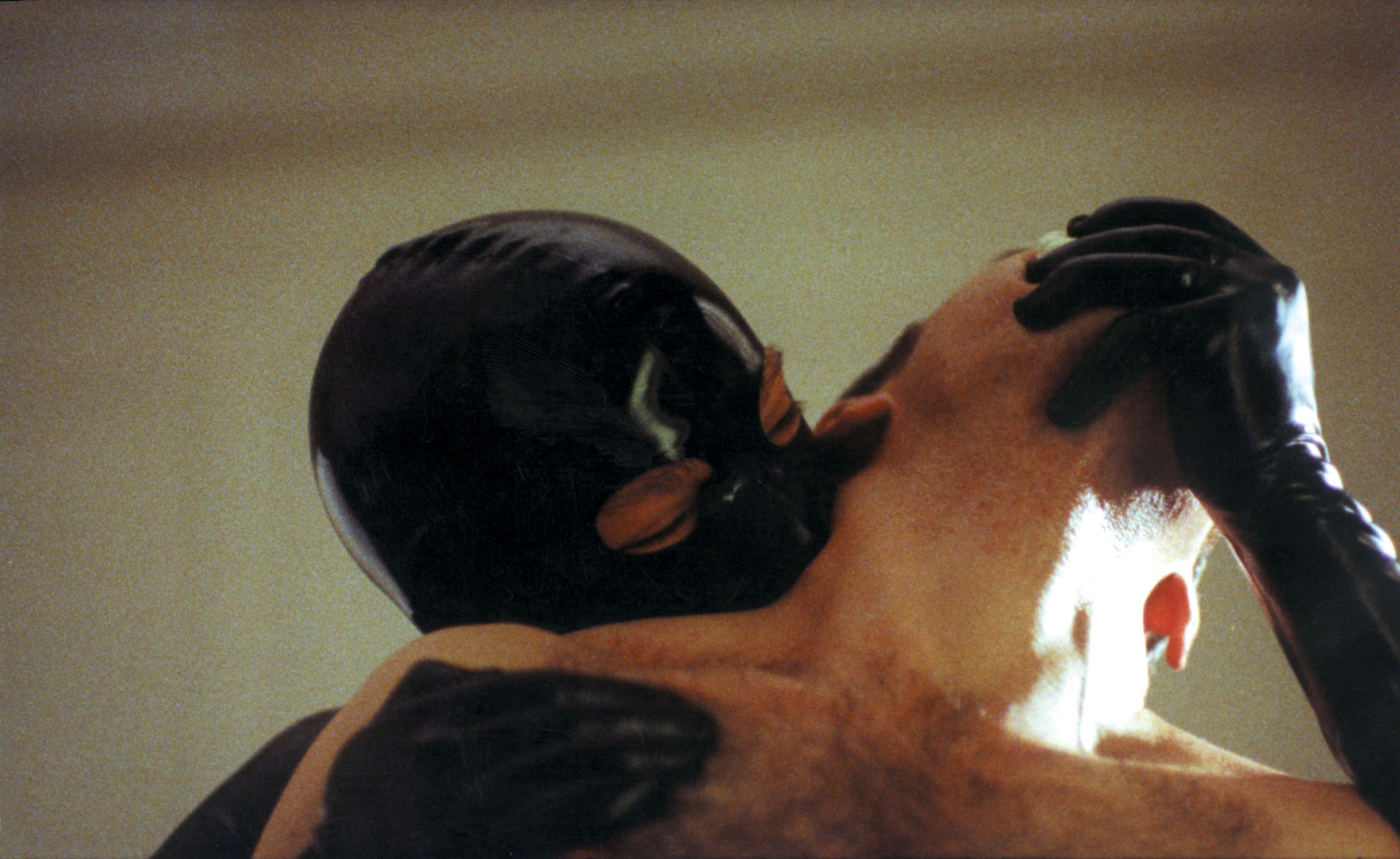 O Fantasma begins with a shot of an unlit hallway where a highly agitated Doberman scuffs a closed bedroom door, whimpering to be let in. Inside the bedroom, we meet Sérgio in his “phantom” guise, a black latex bodysuit and mask, penetrating a gagged and handcuffed stranger to completion. Sérgio’s glossy rump dominates the screen, but a hole in his costume shows the cleft of his ass and acts as a foible in his plastic-becoming, revealing the phantom to also be hot-blooded and made of flesh. 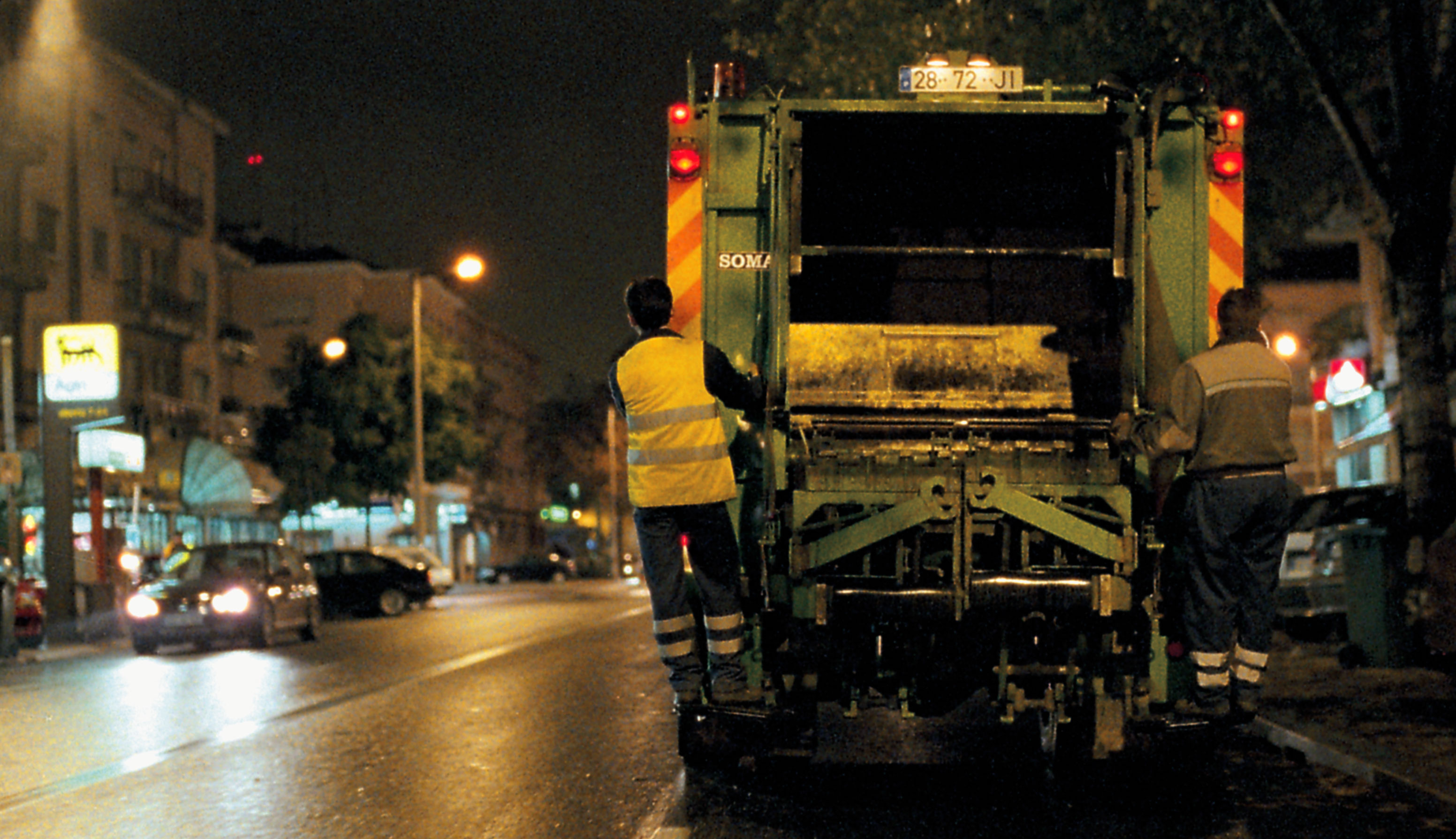 Alan Vega’s jangly “Dream Baby Revisited” plays over O Fantasma’s opening credits, during which we see Sérgio, this time in his work uniform and with his back always turned toward us, holding on to the backend of a garbage truck that’s motoring across Lisbon in the middle of the night. Repeated during the closing credits, it’s the only song heard in the film, which is otherwise scored by the ambient sound of vehicles driving over street puddles and the yelps of dogs that never appear onscreen but tune us into Sérgio’s preferred (read: canine) frequencies. As with his use of sound, Rodrigues’s editing is economical. Establishing shots and jump cuts rarely appear; most scenes consist of just a few shots that don’t interrupt his actors’ body language, or their candor. 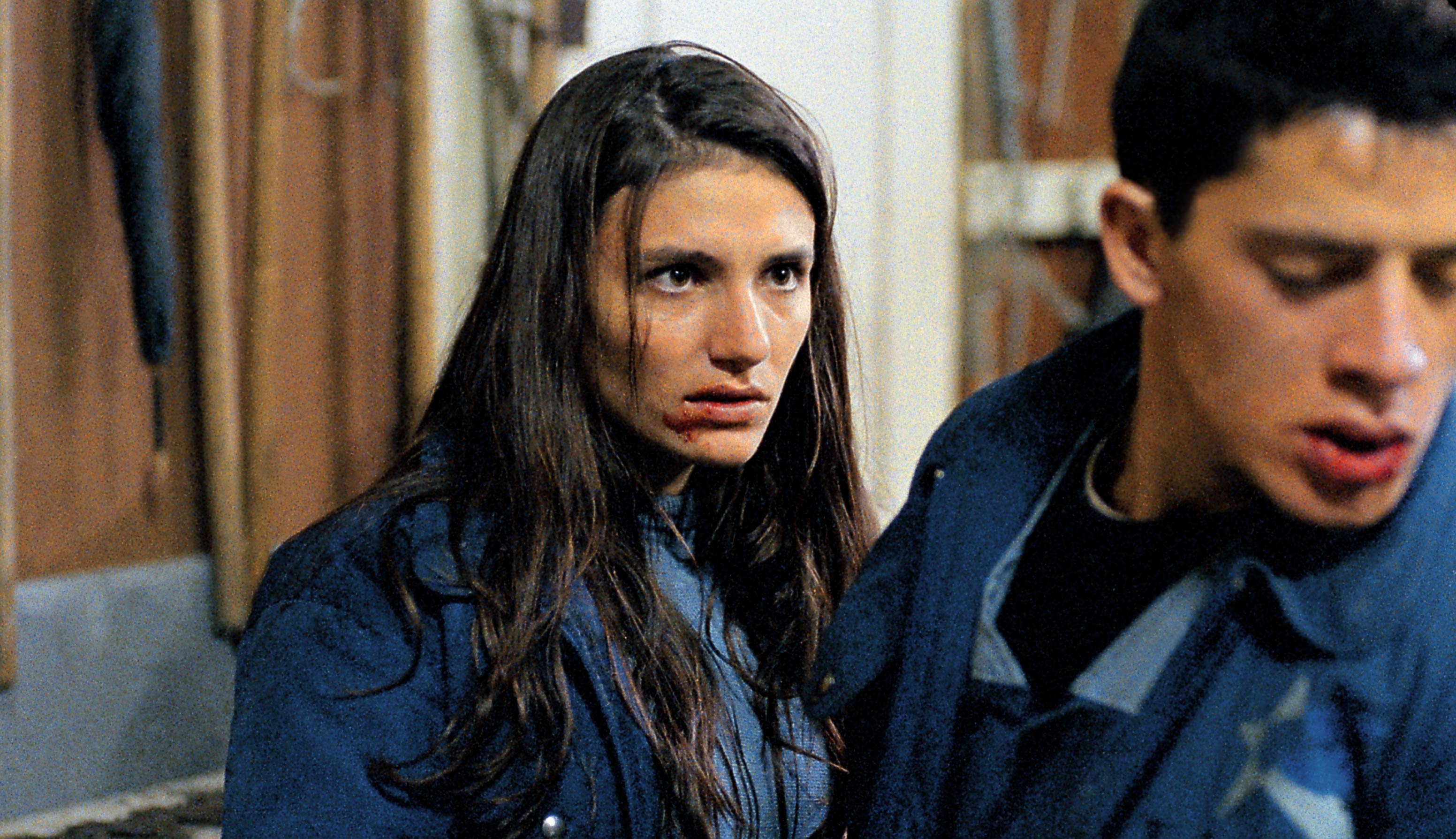 The first time we see Sérgio in full, with his face unmasked, he is on the ground, boisterously playing with Lorde. We are also introduced to Fátima (Beatriz Torcato), Sérgio’s coworker, whose amorous advances he largely rejects. The film follows a fairly linear narrative for its first hour, easing us into Sérgio’s daily regimen. During the day, he’s alone and lugubrious; at night, hungry for anonymous sex; on his wee-hour work shift, more or less efficient. There’s a boyish sensibility to Sérgio; he’s callow and experiences little regret. Brief too are the periods he spares for reflection. While one of his trysts washes himself off post-sex, Sérgio is already halfway out the window, thinking only of escape. 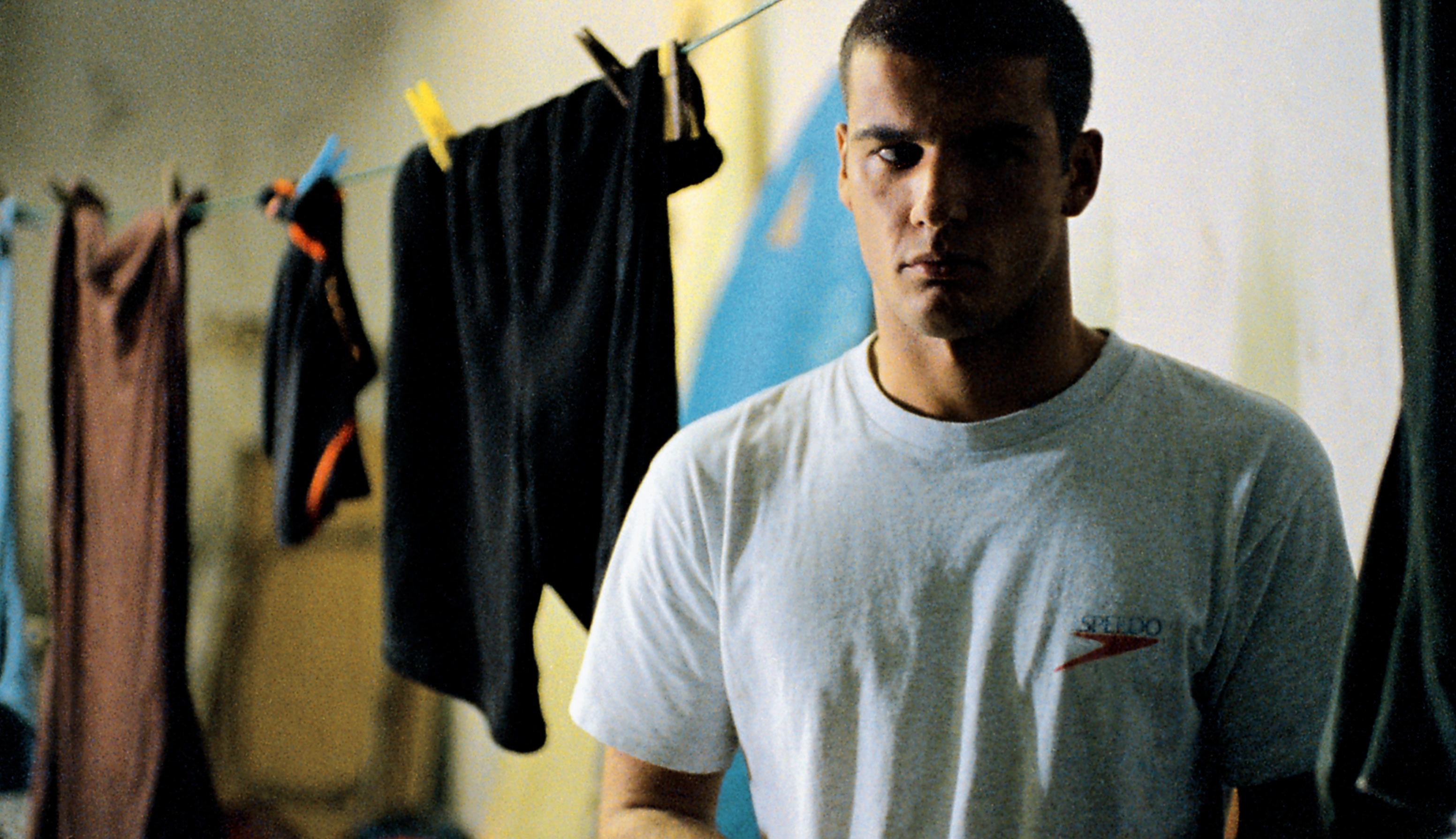 The principal conflict in the film, unrequited love, is sparked by João (Andre Barbosa), a cute motorcyclist who is unmoved by Sérgio’s beauty. Still, Sérgio makes do. He rummages through João’s trash, keeping a pair of the adored one’s torn Speedos and motorcycle mittens as his own. In one scene, Sérgio breaks into João’s bedroom, and, holding a Godzilla figurine he’s grabbed from his beloved’s desk, unzips and soils João’s bed with splashes of urine. The audacious final act depicts Sérgio after he is properly rebuffed by João. He reemerges in his one-piece bodysuit to kidnap João, but abandons the attempt and leaves the city for the landfill, where, contained by his second skin, he traipses across mountains of Lisbon’s trash against a purple dawn. He gets on all fours to gnaw at bags and the scraps inside, hunts a rabbit for game, and defecates inside the facility’s central building. In the final shot, the phantom bounds out a doorway through which Rodrigues’s camera pauses to frame a horizon: freshly razed land soon to be covered with what humans discard. 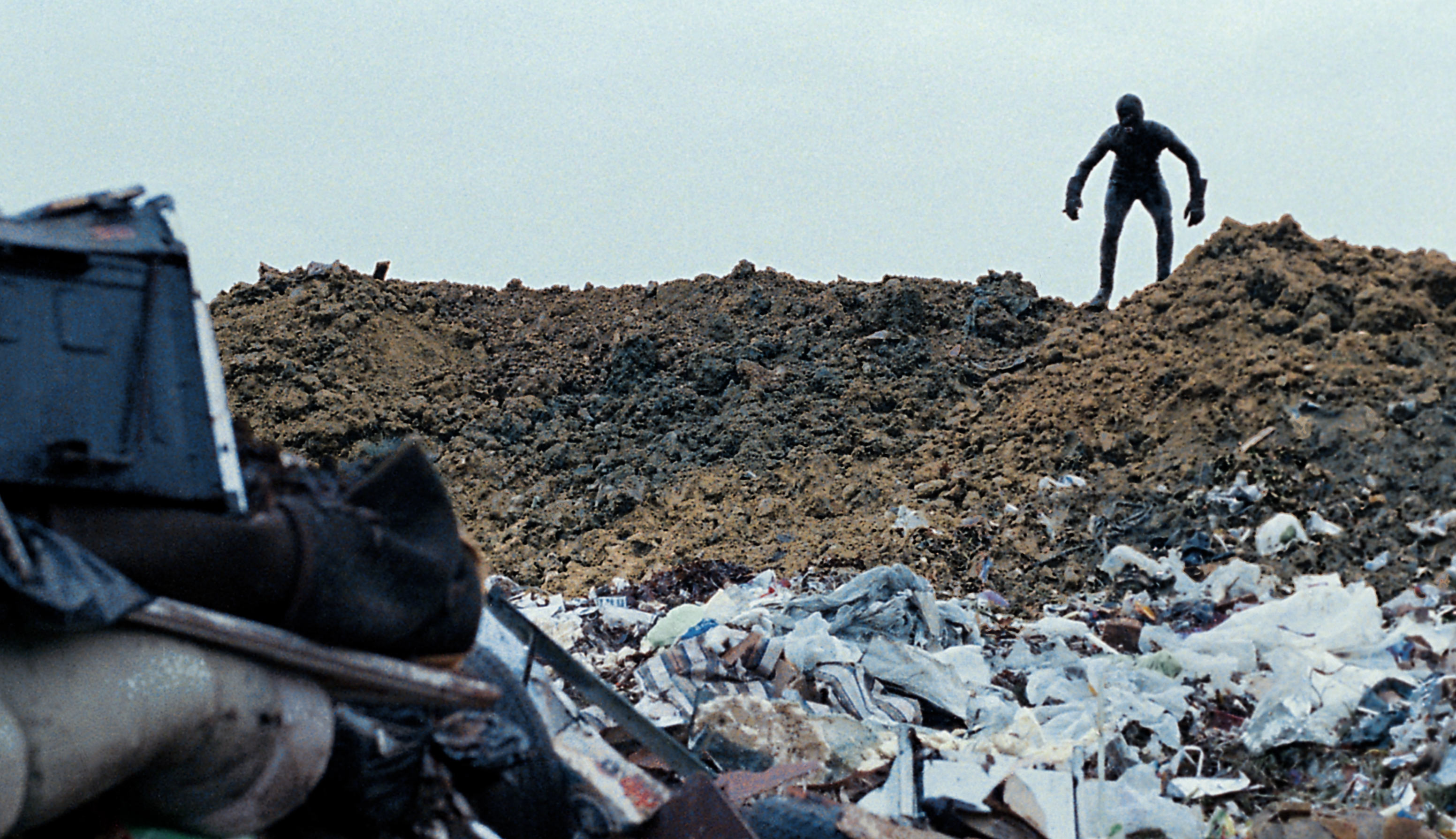 O Fantasma gained purchase on the gay-film-festival circuit, touring successfully for the first few years after its premiere. For me, a millennial teen in the early aughts, Rodrigues’s filthy caper was an extremely welcome, non-straight addition to the cinematic canon of libidinally charged animal-beings I grew up loving. In Sérgio’s gluttony, I saw Templeton the Rat, the antihero in Charlotte’s Web who surfaces after human families leave the fair where the film partially takes place to scavenge the “veritable smorgasbord” of waste they’ve left behind.

Yet the most resonant comparison might be with Tim Burton’s stellar Batman Returns (1992). Michelle Pfeiffer’s pleather-clad Catwoman and Danny DeVito as Penguin—né Oswald Cobblepot, a raw-fish-slinging, onesie-wearing gangster—are both useful models for poor Sérgio: they’ve turned their rejection from society into means for metamorphosis and revenge. These villains, like Sérgio, gain a newfound resilience in their embrace of trash and sewage. And, more than two decades since O Fantasma’s release, we, tilting ever closer to climate catastrophe, may soon find ourselves having to cop Sérgio’s odd manners as survival skills of our own.

Shiv Kotecha writes poetry, fiction, and criticism. He is the author of two books, The Switch (Wonder, 2018) and EXTRIGUE (Make Now, 2018), and is a contributing editor for Frieze magazine. He lives and works in New York.