A show of nine paintings frames the Renaissance artist as a forebearer
of postmodernism. 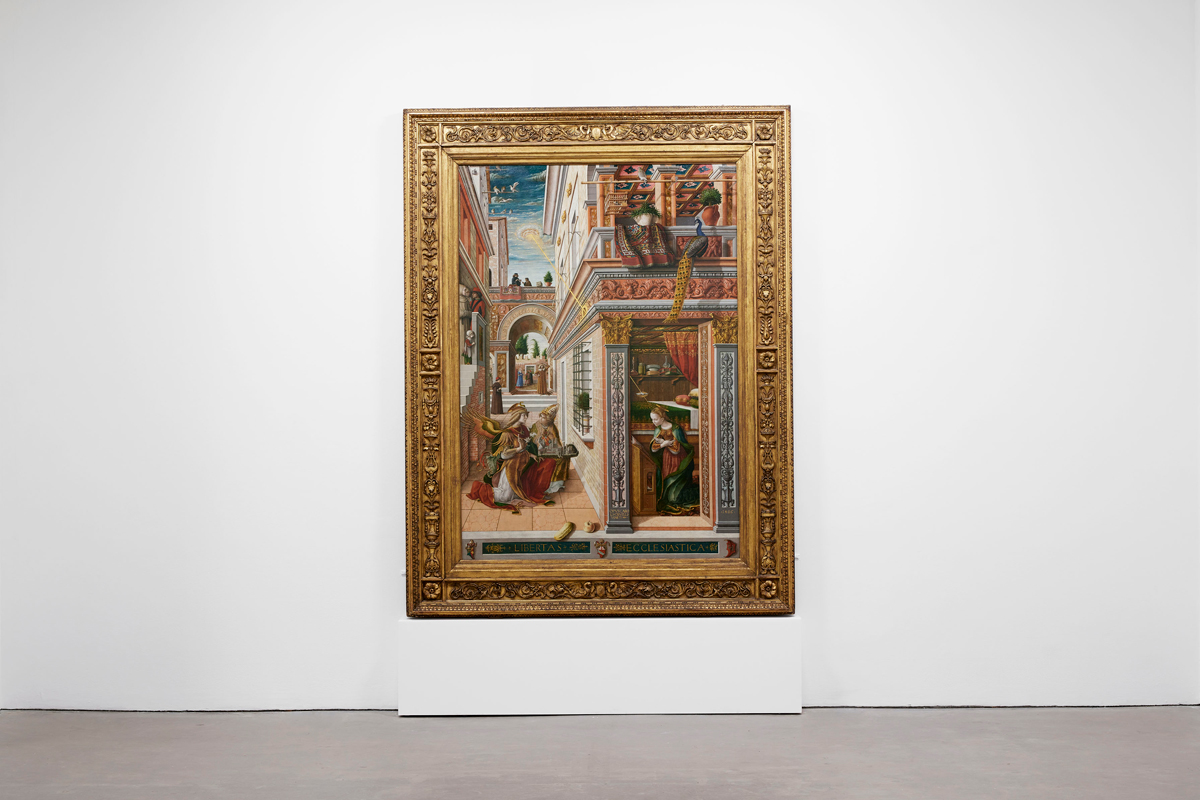 One might be forgiven a sense of rapture and delirium in the small but extraordinary exhibition of Carlo Crivelli’s work at Ikon Gallery in Birmingham. Saints and sinners, monks and penitents, angels and holy visions abound in nine paintings of varying size on loan from institutions across Europe. The works are resplendent with the fifteenth-century painter’s characteristic jewel tones, opulent fabrics, expressive faces, golden pastiglia, trompe l’oeil devices, and obsessive attention to detail. Shadows on the Sky is the first UK exhibition devoted to the Renaissance painter, who was born in Venice ca. 1430–35 and trained in the region, but—after being tried for adultery with a married woman and jailed for six months—spent most of his working life in the Marche on the eastern coast of Italy, south of Ancona. 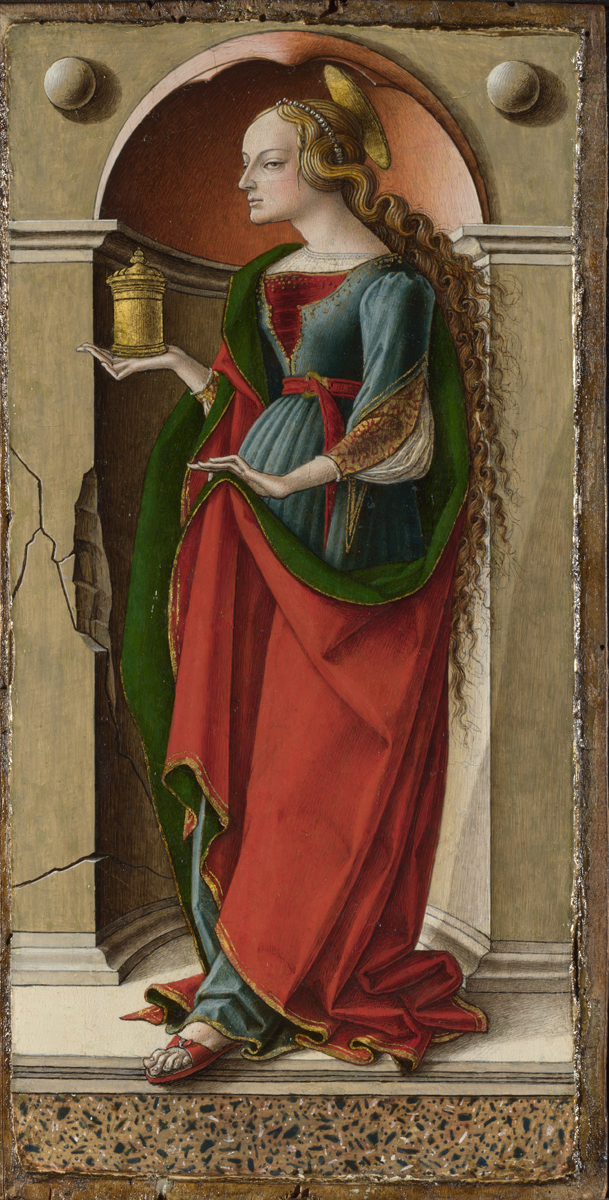 Loathed by John Ruskin and disdained by Clement Greenberg, admired by Edward Burne-Jones, Apollinaire, and Susan Sontag, Crivelli cuts a strange figure in the annals of art history, to whose frequently linear trajectory he is ill-suited. The modest but striking show at Ikon seeks to refine Crivelli’s reputation as more than just that of an idiosyncratic “backwater” Renaissance artist who could never quite manage to shake the painterly predilections of the late Gothic era. Far from being anachronistic, or merely the work of a “minor” artist, the show proposes that Crivelli’s oeuvre anticipates postmodern questions about pictorial space, visuality, illusion, the role of the painter and the painted, and even the nature of reality itself. The artist’s images (primarily tempera on panel) demonstrate a deliberate hybridity of styles, techniques, and motifs—gold leaf and naturalism, courtly International Gothic sensibility and Renaissance one-point perspective, formulaic figure types and deeply individual compositions, images both sensuous and hieratic. And and and . . . why choose, when you could have it all? 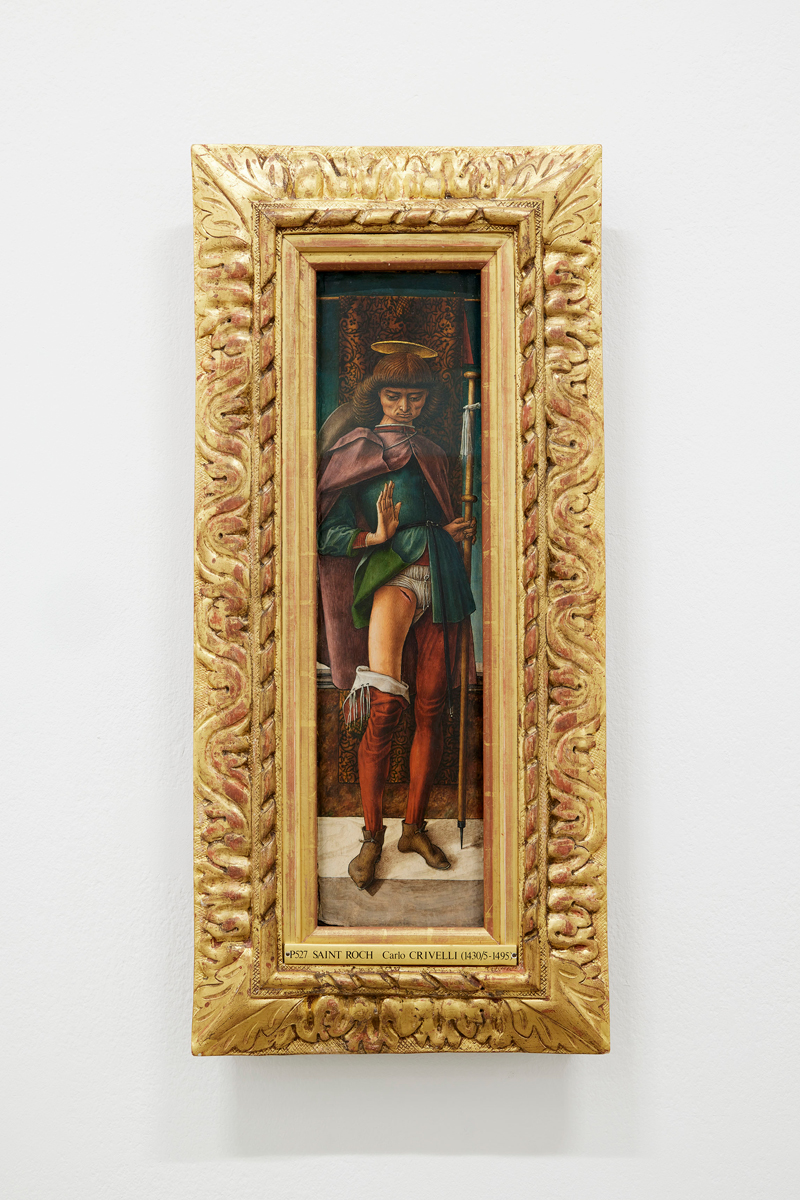 In a series of works that were originally smaller altarpiece panels (only two of Crivelli’s polyptychs survive intact and in situ), saints appear at once lifelike and otherworldly. Two Evangelists (Saint John the Evangelist and possibly Saint Luke) (ca. 1471–73), a dual paneled work, shows the two men reading intently, each framed by a plain gold ground marked only by incised punchwork haloes. Later panels are more individualized and elaborate. Saint Roch (ca. 1480), the ever-so-timely patron saint invoked against the plague, is extraordinarily long and slender, his stylized visage and limbs clearly outlined. The saint’s chiseled face is angled down, his brown hair feathered, each strand delineated, his right palm raised, elegant pinky finger bent just so. I first came across Saint Roch at the Wallace Collection in London, his permanent home, while wandering through its eerily empty rooms in December during the Omicron outbreak. At Ikon, in a bright and stark white environment, his image is even more arresting—the long red hose, or calze, of one leg rolled down to reveal the telltale plague wound near his groin; the white cotton handkerchief tied to his staff; his hovering gold halo; the tiny metal buckles on his worn leather shoes; how his right foot extends barely beyond the parapet of the image as though he might step forward to meet us. Aspects are quietly engineered so that Roch seems to live, and to move—in sickness and in health—as the rest of us do. 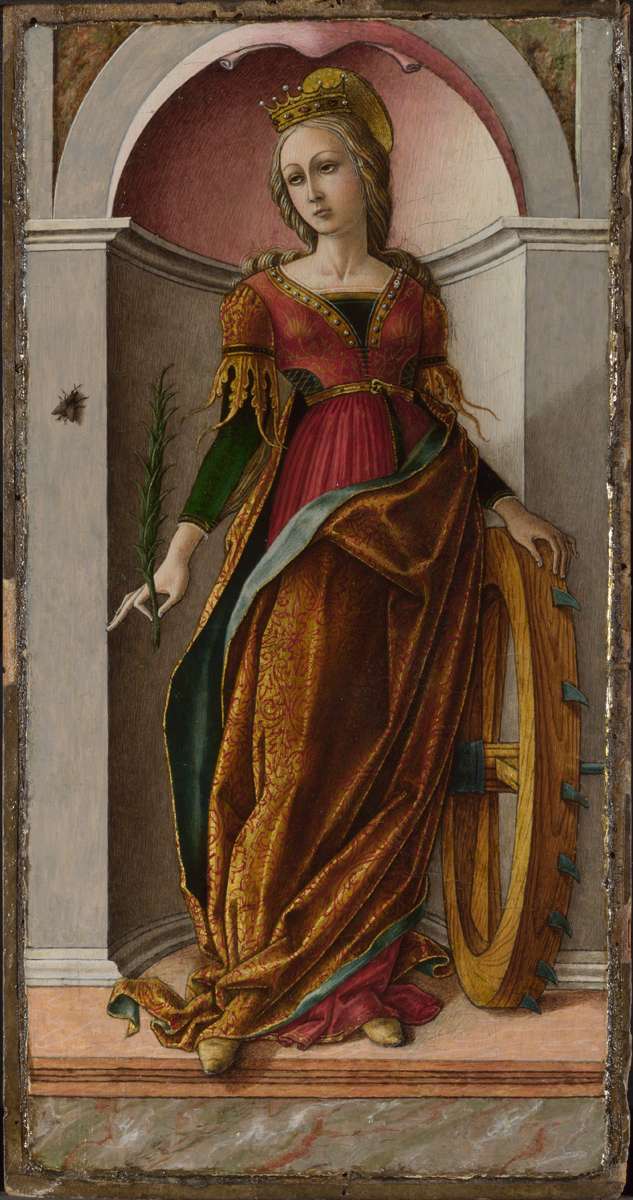 The foot over the parapet is one of Crivelli’s signature devices, a kind of painterly breaking of the fourth wall: saints may be holy, but they—like these devotions—come from our own world, where they are now beheld. Crivelli’s works are highly staged and carefully embellished with spatial illusions and uncanny features that destabilize the act of looking—icons that know they are icons. In Saint Mary Magdalene (ca. 1491–94), the edge of the niche behind the lavishly garbed saint is riven with jagged fissures, the plaster falling away to reveal structural precarity. Saint Catherine of Alexandria (also ca. 1491–94, from the same altarpiece) is likewise clothed in luxurious dress that indicates her existence beyond the realm of vernacular sumptuary laws—sartorially precise, but impossibly decadent. To her right sits a fly scaled, disarmingly, to the world of the viewer, as if it could be swatted away. 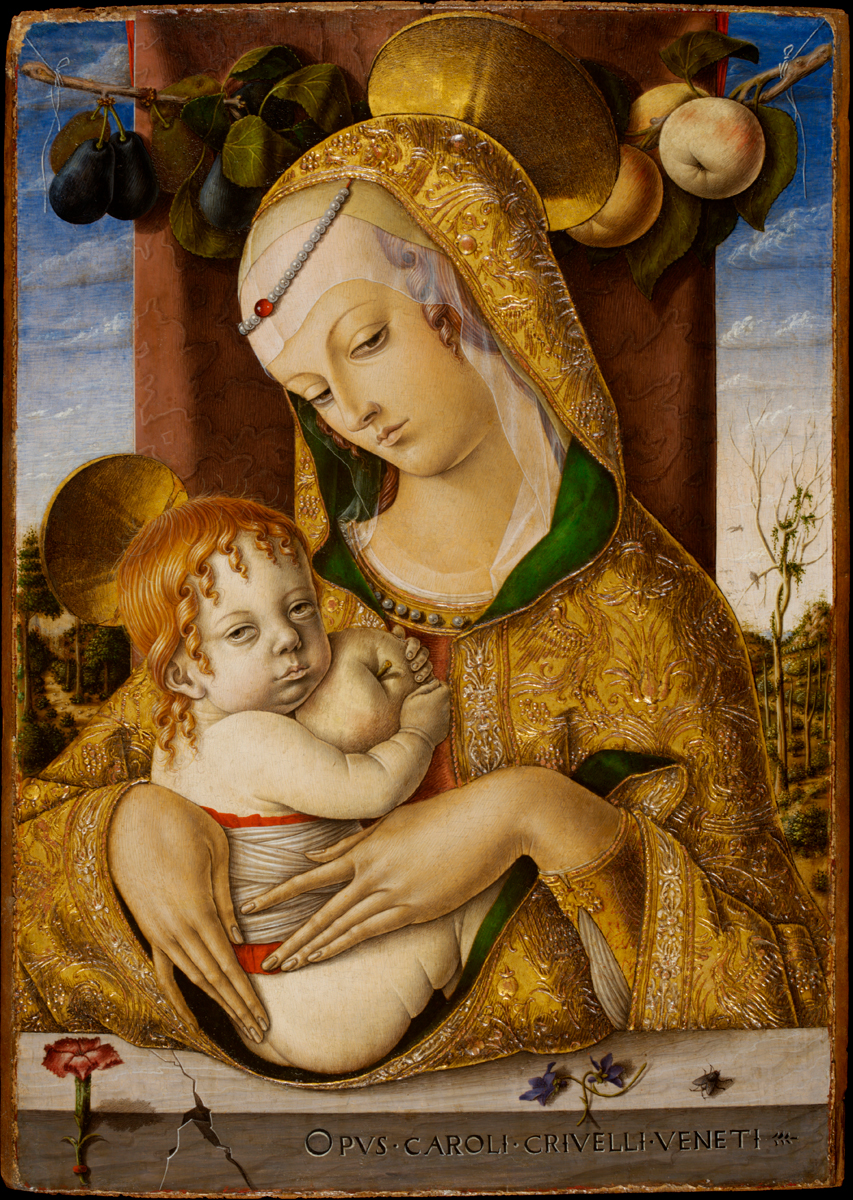 Virgin and Child (ca. 1480) and Madonna and Child (ca. 1482), sinuous compositions of placid-faced and elaborately robed Mary and Christ child, similarly employ techniques that confound the eye, revealing their constructed nature. In the former, the stone parapet below the Virgin—her golden mantle riotously pattered with phoenixes and pomegranates in raised gesso pastiglia—is cracked and adorned with flowers that appear as if fixed to the painting, rather than as part of the image itself: wilted violets, a sprightly red carnation. Nearby, another viewer-scaled fly. Offerings from and of the mortal world? In both paintings, behind the Madonna hangs a theatrical swath of fabric and a thick swag of fruit—pears, peaches, plums—tied at the sides by pieces of string. Who has assembled this scene? The local community, bearing gifts to the Saint? The commissioning diocese? The painter? God? All of the above? 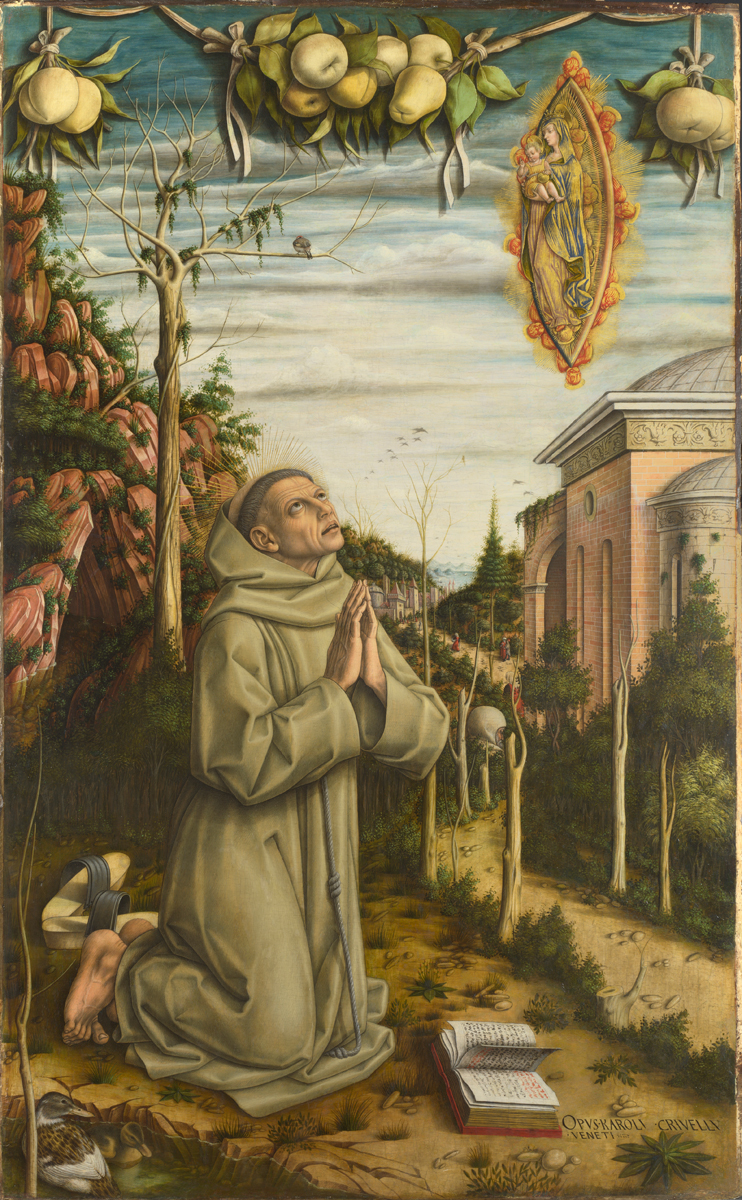 The two biggest and most hallucinatory works in the show, The Vision of the Blessed Gabriele (ca. 1489) and The Annunciation with Saint Emidius (1486), display Crivelli’s sly playfulness in constructing spaces within spaces that are not only visual but ontological—spatial and perspectival shifts as demarcating realities within realities, a collision of realms. The exhibition takes its title from Gabriele, in which the kneeling Saint receives a vision of the Madonna and Child emerging from a golden mandorla flanked with red cherubim, which seems to escape the picture plane altogether, as though hovering just in front of its surface, in another dimension. At the top of the painting hangs an elaborate garland of apples, peaches, and pears, strung together with white ribbon that dangles softly and, like the fruit, throws shadows upon the blue sky behind. Gabriele, with his reverently upturned face and bulging eyes, the shining Holy mother and son, and the rich botanic festoon (these garlands were common decorations at local festivals, as well as graveside oblations to ensure safe passage to the afterlife) live at once in different times and spaces. 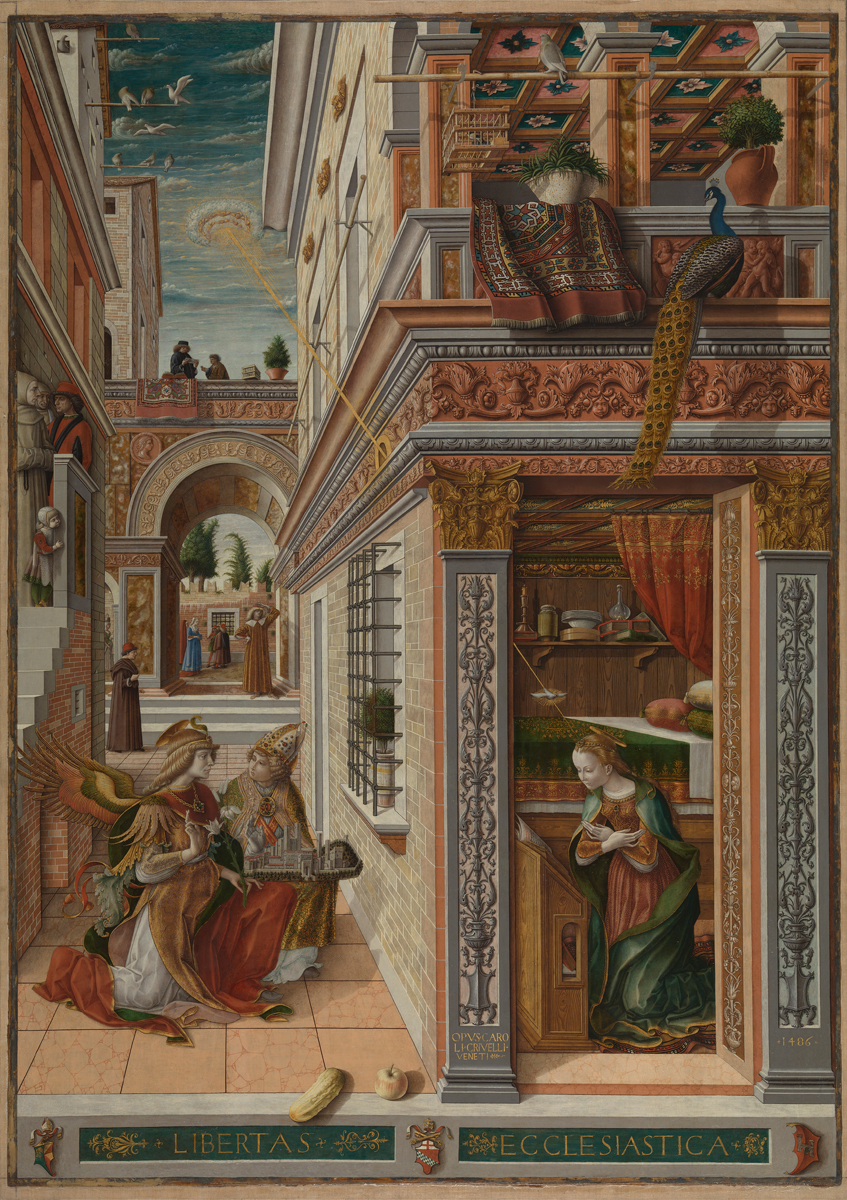 The Annunciation is more ordinary, as far as “ordinary” goes in Crivelli. Though complex and crammed with detail and religious symbolism, it is entirely linear in its perspectival construction, but for one fine, piercing particular: the ray of golden light that emanates from the Holy Ghost and passes through a small, gleaming chink in the wall of Mary’s chamber to anoint her as she kneels, praying, is flattened against the surface of the image—it exists somewhere between us and the action unfolding. At the parapet, life-size tokens once more bridge the real and spiritual worlds: an apple and, Crivelli’s signature vegetable, a cucumber. As a subject, the Annunciation presents a visual paradox: how to see what could not be seen, how to represent what cannot be represented, or, as the Franciscan preacher San Bernardino da Siena proselytized in 1425, the moment in which “eternity entered time, immensity entered the measurable”? By painting reflexive images that can be read like texts, perhaps: ekphrastic transportation that insists on just how many ways of looking coexist within the world, then as now.

Emily LaBarge is a writer based in London. She has written for Artforum, Bookforum, the White Review, Granta, and the Paris Review, among other publications. She is the London correspondent for the Montreal-based quarterly esse arts + opinions.