Film
Both Sides of the Blade 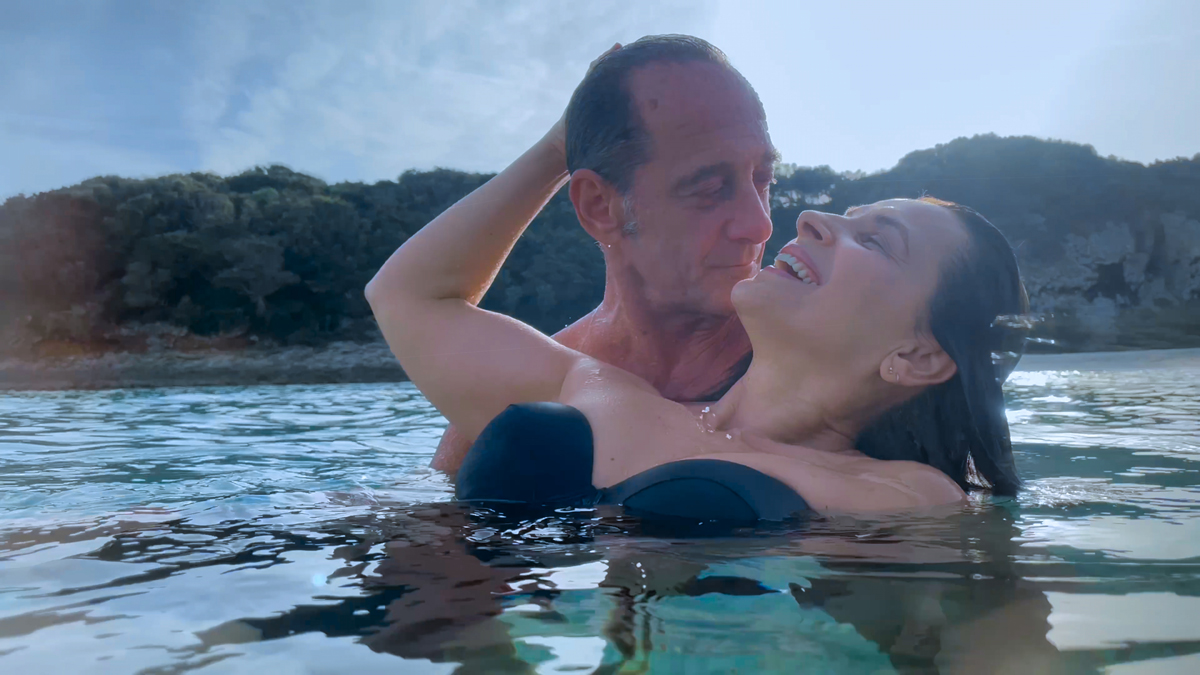 Vincent Lindon as Jean and Juliette Binoche as Sara in Both Sides of the Blade. Courtesy Curiosa Films.

Both Sides of the Blade, directed by Claire Denis,
opens in theaters July 8, 2022

Love debases us. It does other things, too, but it has a tendency toward mania and self-delusion. Claire Denis’s Both Sides of the Blade is a film filled with this kind of ruinous love.

Denis occupies an enviable position in contemporary cinema: she has made movies that are expansive and daring without jeopardizing her career. Since Chocolat, her 1988 debut, she has never gone longer than four years without making a feature-length film. She has been devoted to a form of cinema that generates meaning through a steady amassing of sensuous detail. This has meant, in turn, that the performances seem less interested in moments of explosive conflicts than in creating friction. Her characters are often on the precipice of something they are not yet willing to concede to: puberty (US Go Home), the collapse of the colonial system (Chocolat and White Material), or a new romantic life (Friday Night and 35 Shots of Rum). When the explosions do come, as with the kidnapping in Nénette et Boni, they are not mere plot points, but a release valve for the tension built up by all that friction rubbing her characters raw.

Juliette Binoche as Sara in Both Sides of the Blade. Courtesy Curiosa Films.

At first, Juliette Binoche’s entrance into Denis’s troupe, which began with 2017’s Let the Sunshine In, seemed incongruous to me. Binoche is an actress whose method, even more than her star power, necessitates a broad canvas, room to range. Denis, however, works in an almost stifling emotional proximity to her characters. Even when the director went to space with 2018’s High Life, she made it into a prison. In Both Sides of the Blade, the agonism of their preferred modes is productive. Denis’s film hovers around a woman who cannot decide which part she ought to play or how to play it and so has settled on blowing the whole thing up.

Sara (Binoche) is an on-air host at Radio France Internationale who lives with her long-term boyfriend, Jean (Vincent Lindon). The film opens with the couple in a state of romantic bliss, floating together in startlingly blue seawater before they return to their Paris apartment with its irresistible view of the city’s famed roofs. There is no sour post-vacation lull here. As soon as they’re back, they immediately fall into bed.

We can imagine their lives continuing like this indefinitely, but this is the story of a woman who is undone by a fleeting glance. On her way to work Sara sees a former lover, François (Grégoire Colin), across the street and panics. She hurries into her building, clutching her stomach as though she has been struck in the gut. As is often the case with Denis, there is little in the way of direct backstory. What we learn about the characters’ lives comes in bits and pieces, the way it would be among people intimate enough with one another to eschew explanation in favor of allusion.

Grégoire Colin as François and Juliette Binoche as Sara in Both Sides of the Blade. Courtesy Curiosa Films.

Before she was with Jean, Sara was dating François, who had been his best friend. François and Sara’s was a rapturous love, but the forms and routines of their affection left her adrift. At some point, she left François for Jean, who was sentenced to prison (though we’re never sure when) for an undisclosed crime. Nearly a decade on, François has returned, ostensibly to offer Jean a job as a rugby scout for a new agency, but mostly to demand a resumption of his relationship with Sara. Her struggle is not how to say no, but when and how to say yes.

If the film’s ellipses raise questions, most of them are answered by the performances. When Sara returns home after doing nothing more than catching sight of her ex, she immediately confesses. “I saw François today,” she tries to say offhandedly. “Okay,” Jean responds. Lindon is a master of modulation. His faux-nonchalance is enough to clarify where everybody stands. François is a threat to this happy home, even if they would both like to act as if he were not. Binoche plays Sara with a trembling, reckless intensity. We have to believe that she has begun an affair with her petulant ex out of a real, burning love because it otherwise seems to be making her sick. She is given the kinds of lines one hopes never to hear. When Jean undresses in the bathroom after a long day, she tries at once to reassure him and admit her rekindled feelings. No one ever loses love for a past beloved, she says. This may be true, but as a rule it is inadvisable to say so to your current lover as they look over their own naked body in a bathroom mirror.

Vincent Lindon as Jean in Both Sides of the Blade. Courtesy Curiosa Films.

The affair film is a difficult genre. It is filled with scandal and violent emotions, but it is also utterly predictable. The story can go only so many places: there will be a sexual encounter and then either a reconciliation or a breakup. The central question is how long the decisive moment can be delayed. When done well, the predictability is used to the film’s benefit. We know where this is heading and it is only the amorously deranged character who dashes back and forth, incapable of seeing there is no way out.

The best of these films, from David Lean’s Brief Encounter to Radu Muntean’s Tuesday, After Christmas, produce a guilty pleasure. We root for the adulterer in their deception even while realizing that the drama rests on the knowledge that they will come to ruin. It is only the viewer who gets to have their cake and eat it, too. But Denis twists the knife when the fight comes. After Jean storms out, he returns (at least temporarily), cowed by the prospect of life without Sara, and offers to make it work. He does not sound like a man who has made a decision but one who has been defeated. 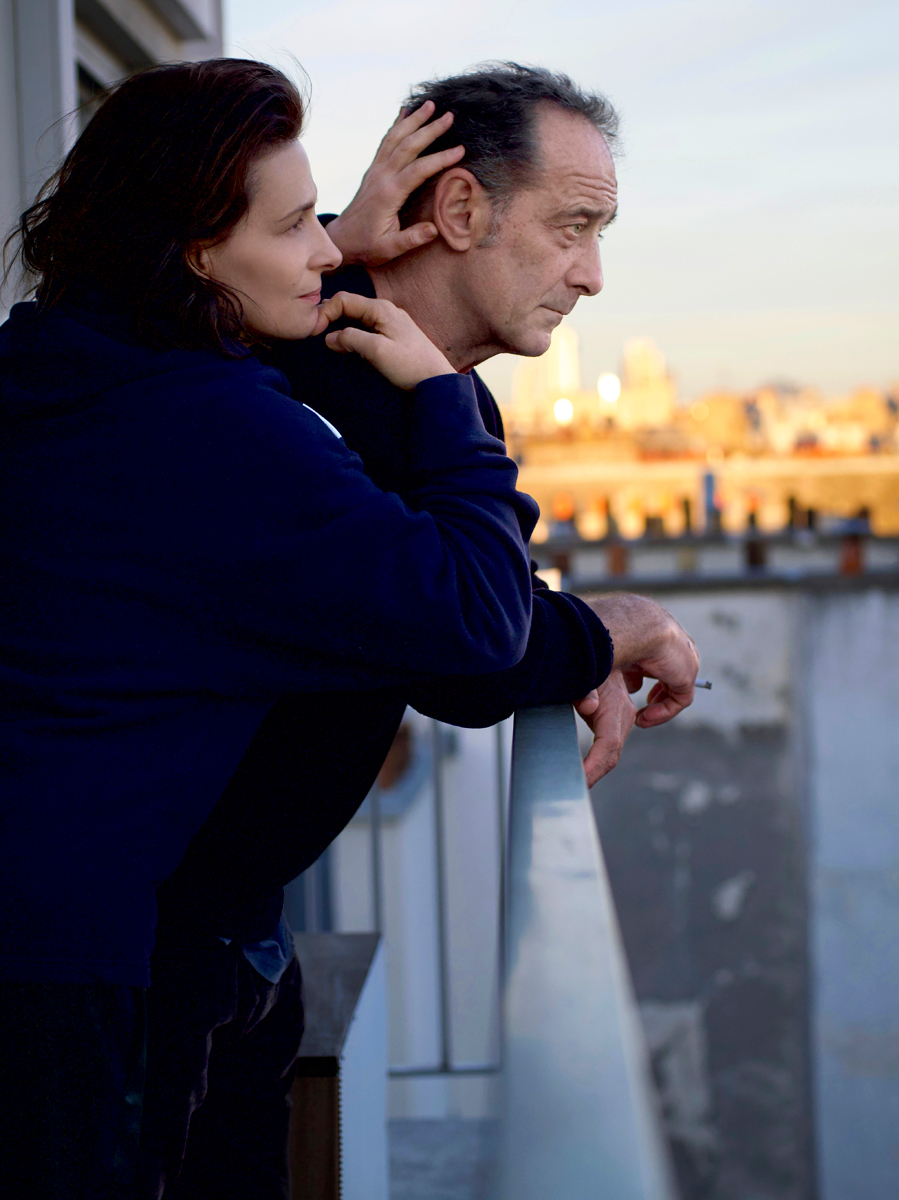 Juliette Binoche as Sara and Vincent Lindon as Jean in Both Sides of the Blade. Courtesy Gaëlle Rapp-Tronquit.

Both Sides of the Blade is a peculiar film to place in Denis’s oeuvre. It is suffused with regret and yearning, while also trying to push toward something new. Faces from some of her most celebrated movies appear here: Alice Houri, Lola Créton, Mati Diop, in addition to the three leads. While it is not uncommon for directors to work with the same actors, Denis’s doing so in Both Sides of the Blade feels, as it did in Martin Scorsese’s The Irishman, like a taking stock.

When Diop shows up in a shop, the shot recalls a similar one of her in 2008’s 35 Shots of Rum, trying not to be caught looking at one of her classmates. But now Diop is older and a celebrated director in her own right, struggling with some of the same formal questions as Denis. Perhaps this kind of resonance is only there for a small band: Denis and her collaborators and also those remaining partisans of a cinema, lately menaced, stubbornly searching for new means of expression. Still, one is hesitant with great artists to call something a “late work.” It holds unseemly implications about entropy and the forward march of time. Claire Denis has never been faithful to time. In her films it is inexorable, but in the way of a tide rather than a cattle driver. It rises and falls, filled with eddies and other perturbations of the current. You cannot be sure it will always carry you safely back to shore. You stand on a street corner and see a sliver of a face, just enough to make a past life present and pull you under.