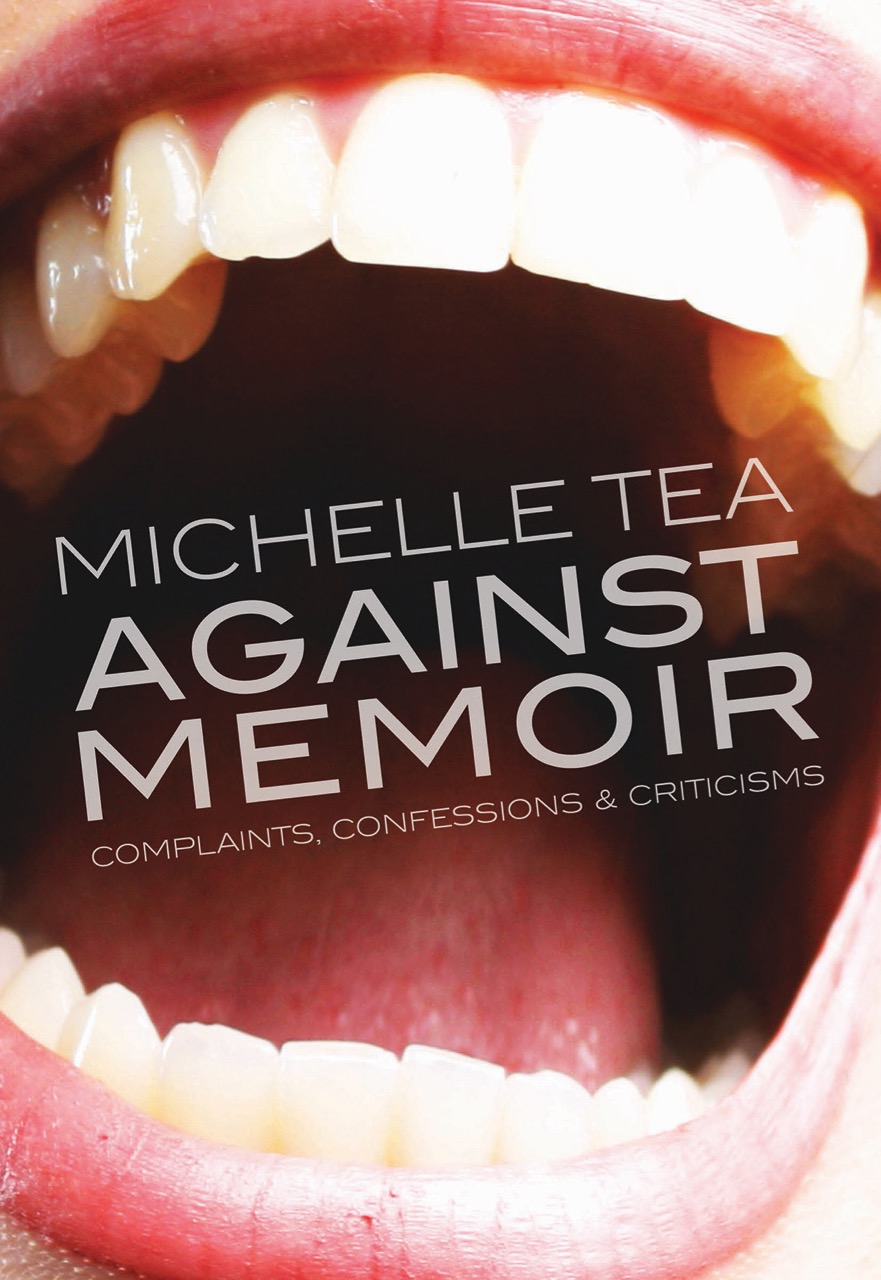 I used to describe Michelle Tea’s writing as intoxicating, and it was: pitched up and speedy, a whirlwind of drugs, sex, and punk poverty that seemed glamorous from the outside. It’s been illuminating seeing Tea reflect on this work from the position of sobriety in recent books. Her 2015 memoir How to Grow Up offered a lessons-learned meditation on adultish clean life, while her 2016 (and, I think, best) novel Black Wave threw a harder eye at her former self, using fiction as a cover to reckon with the effects of alcoholism—and writing—on her relationships. These twin concerns—addiction and writing—show up frequently in her new book, Against Memoir: Complaints, Confessions & Criticisms, a collection of essays and talks written over the past fifteen or so years, a period that overlaps neatly with her sobriety. In one essay she calls her autobiographical novel Valencia (2000), her most widely read book and a contemporary dyke classic, a “drunkalogue.” She started drinking “in earnest” at fifteen, she tells us elsewhere, and didn’t stop until she was thirty-two. Happily, she’s never stopped writing.

Tea is a queer-lit powerhouse, a prolific author of memoir, fiction, and poetry who has also edited four anthologies. She founded the poetry-and-performance road show Sister Spit as well as the San Francisco literary organization Radar Productions. She also edits MUTHA Magazine and runs an imprint of City Lights Books. Though her writing persona depends largely on her reputation as a zany but lovable punk scamp and loser of jobs, she’s pretty much a boss at this point. Ranging from tributes to Valerie Solanas and Prince to a lengthy dispatch from Camp Trans and essays on pregnancy and parenting, Against Memoir is a thoughtfully curated showcase of Tea’s writing about queer politics, relationships, history, and the self.

The title of this collection is, in part, ironic—Tea is a tireless chronicler of her life and we are the lucky beneficiaries. But there’s sincerity, too: Against Memoir sees Tea lose faith in writing, only to regain it again and again. In the title essay, Tea poses the question of whether writing itself might be an addiction: “so similar does it feel, an ecstasy of communion with yourself that facilitates the transcendence of your self.” Though an anxiety about the potentially narcissistic nature of memoir surfaces repeatedly, what strikes me about her work here is how connective her first person is, how strongly she binds the personal to the communities and contexts that have shaped it, whether her family and her working-class community in Chelsea, Massachusetts, or the dyke punk subculture of 1990s San Francisco. She archives the latter in a sprawling forty-four-page history of the dyke street gang HAGS (short for nothing and always in caps). “Even at a distance,” she writes, “the HAGS marked me, had a tattooed, silver-ringed hand in making me who I was and am.” Both memorial and hagiography, the essay celebrates a group that’s been largely forgotten while reckoning with its intense drug use: two HAGs died from bad heroin that infected them with flesh-eating bacteria.

Those members have been reduced to lurid news bites, Tea writes, and the group’s true legacy has gone unrecognized until now—as has the 1990s SF dyke community of which it was a part. “There is no recorded history of this subculture,” Tea asserts, “and the copious amounts of culture it produced: politics, fashion, art, sex.” A number of other essays similarly double as historical records. Most notable is “Transmissions from Camp Trans,” first published in 2003 and updated in the wake of the 2015 closure of the Michigan Womyn’s Music Festival. (Camp Trans had been founded to protest the festival’s trans-exclusionary gender policy.) A journalistic endeavor, “Transmissions” includes first-person on-the-ground accounts from a number of important trans activists and will remain an essential record of lesbian/trans political tensions from the late 1990s/early 2000s (some ongoing) filtered through Tea’s wry, sharply observant voice and kinetic writing.

“Hard Times” (from 2005) also explores lesbian/trans tensions, in this case within romantic relationships as Tea adopts the perspective of a hypothetical femme at a dyke bar with her transmasculine partner. Reading it today, the gender conflicts still sting while the questions posed about lesbian/trans space—“So, am I supposed to go to a straight bar?”—seem, arguably, resolved. That the distance between then and now seems so big is encouraging. Her talk to young queers, “How to Not Be a Queer Douchebag” (2011), a kind of manifesto howling bullshit on certain queer cultural and sexual politics, is, if occasionally over-righteous, a thorough indexing of recent and ongoing issues in many queer communities, from call-out culture to femmephobia to the politics of nonmonogamy.

Class is everywhere here, as always in Tea’s writing, but there’s inconsistent attention to race. Her reappraisal of Minor Threat’s self-titled album criticizes songwriter Ian MacKaye’s “white laziness” in the track “Guilty of Being White” (where he essentially “tries to weasel his way out of white privilege”). It’s startling, then, that in describing the cakey white clown makeup she wore as a teen goth (she “wanted only to turn to the mirror and behold white, white skin, bloodless”), Tea misses an opportunity to address goth culture’s whiteness.

To varying degrees these essays advance an inquiry into the ethics and political potential of writing. This comes up most powerfully in “The City to a Young Girl,” where she expresses a loss of faith in writing after the election of Trump, only to regain it through a serendipitous discovery of a young woman’s poem, which, she learns, launched a legal battle ending in protections against censorship in school libraries. Inspired by this, Tea inspires in turn: “I’m feeling it, the purpose and point of our political writings, our personal struggles. . . . It’s to leave traces of ourselves for others to hold on to, a lifeline of solidarity that spans time.”

I’m feeling it, too, and I’m holding on to Tea’s lifelines, shot through as they are with earned wisdom, a politics, energy. And love—not just for her partner and child and the others in her life, but for her creative contemporaries, too. Some of her best, most touchingly exuberant essays here are her tributes to other artists, from Eileen Myles to Erin Markey to her tourmates in Sister Spit. Really, she is such a fan. “Reading this made me feel happy and alive,” she says of Myles’s Chelsea Girls. These essays do the same for me.