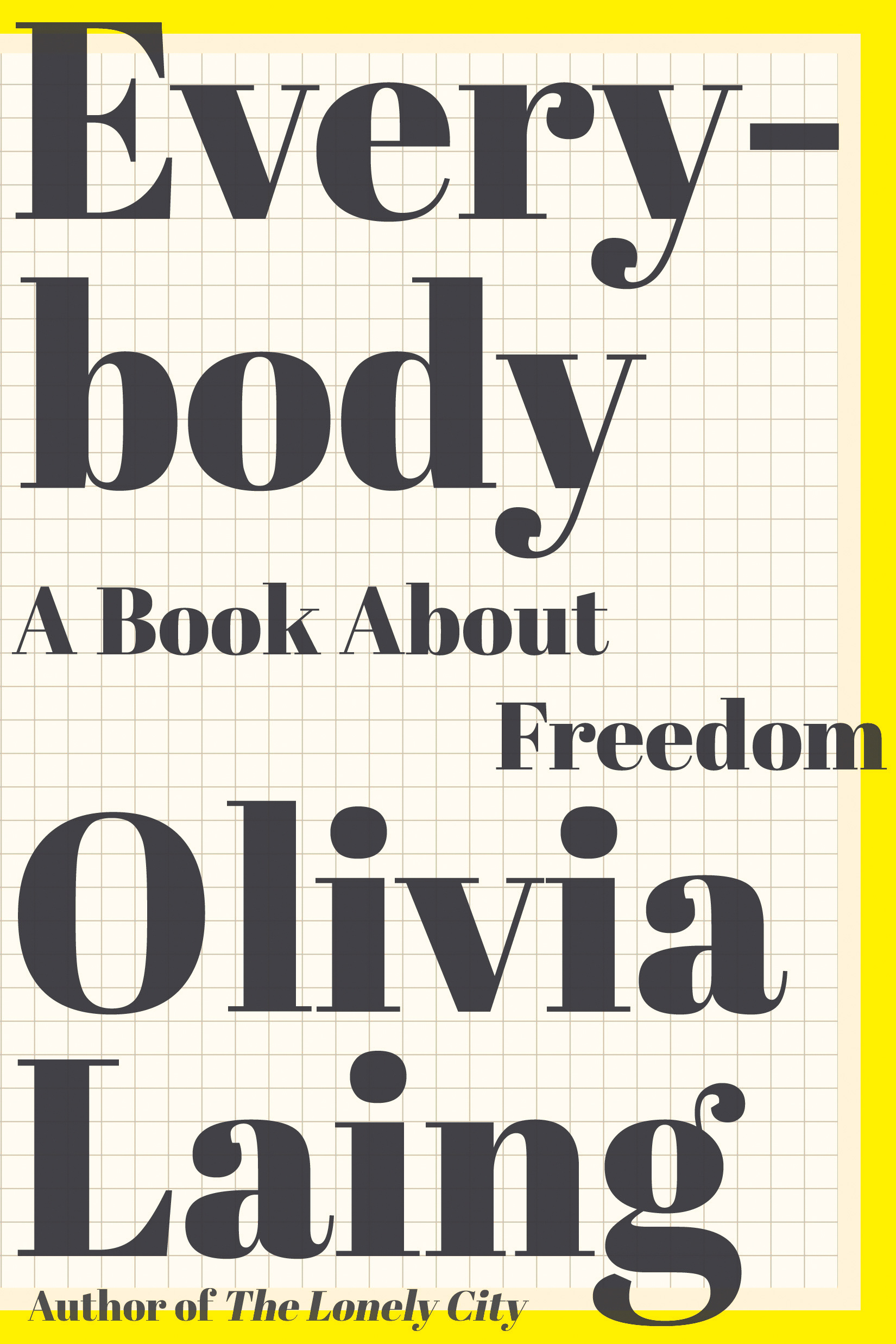 Given the vast, pervasive relevance of its subject, freedom, Olivia Laing’s new book about it is appropriately big—in scope, in reach, in feeling. (It’s fairly standard in page count.) Everybody: A Book About Freedom travels buoyantly through a rich swathe of cultural history to investigate bodily freedom and its curtailments: from illness and pain to the methods we take to relieve them, from state-sanctioned violence to the freedom movements that have emerged to resist it, from gender injustice to sexual liberation. It’s a formidable undertaking, one that Laing executes savvily, her plainly diligent research synthesized in lucid, coolly urgent prose.

Across eight dense chapters, Laing assembles an intricate constellation of proximate stars of the last century: Susan Sontag glimmers beside the artist Ana Mendieta as reclusive painter Agnes Martin blinks on and off (to name a few). But the biggest light in her sky is Wilhelm Reich, the book’s focal figure, whom we might imagine presiding over us and pouring down his infamous orgone energy. Reich believed orgone to be the vital force of the universe and in 1940 invented a narrow, closet-like box in which, he contended, an individual could harness its healing power. You may know his story through Kate Bush, whose song and video “Cloudbusting” chronicles his arrest after years of persecution by the FDA on the grounds of false claims.

Laing, a UK-based art critic with five previous books and a MacDowell fellowship to her name, is endlessly captivated by the complex personal histories behind creative acts. In works like the superb The Lonely City: Adventures in the Art of Being Alone (2016), which has found new readers during the current pandemic, and Funny Weather: Art in an Emergency (2020), a collection of essays and criticism, she provides empathetic, freshly insightful accounts of twentieth-century artists such as Edward Hopper, David Wojnarowicz, and Jean-Michel Basquiat. An ex-Freud protégé and eventual fraud, Reich makes a fascinating, perhaps unlikely addition to her archive.

To some extent, Everybody offers a recuperation of Reich, whose remarkable fall from credibility has largely scrubbed out his earlier contributions. Before he became synonymous with bogus science, Laing explains, Reich broke with Freud to become a founder of somatic psychotherapy and a sex radical in the interwar period—a “lay preacher of the erotic” who campaigned for birth control and challenged the institution of marriage. (Disappointingly, his vision of a sexually liberated society excluded homosexuality.) Laing dove into his work and life in 2016, compelled by the parallels between the emergencies of Reich’s era (the rise of Nazism, then McCarthyism) and our own (among them, the European refugee crisis and the resurgence of white supremacist fascism). “I was haunted by the sense that there was something vital untapped in his work,” she writes. “His ideas felt like time-capsules, half buried in history and still humming with life.” Of particular interest was his dedication to bodily freedom, which he sought relentlessly through touch, political action, and invention.

Once she unearthed them, Reich’s theories seemed to radiate out in all directions, a reach reflected in Everybody’s structure. Laing spreads Reich’s biography over the full book, and chapter to chapter forges links to other lives. In addition to the aforementioned, her subjects include second-wave feminist firebrand Andrea Dworkin, gay civil rights activist Bayard Rustin, visionary song artist Nina Simone, and others. The result is a roving, idiosyncratic social history of freedom as it has been imagined and pursued, from the Marquis de Sade’s depictions of liberation through sadism (reframed by Dworkin as sexual violence) to Rustin’s praxis of liberation through nonviolence.

It’s also a record of failure. Laing observes the painful irony that Reich’s orgone accumulator, envisioned as a liberation machine, was for all purposes a closet, prefiguring his eventual confinement to a prison cell, where he would die of heart failure. Spaces that constrain repeat in the prison cells that held Rustin and Malcolm X, the tunnel into which Laing burrowed as part of a protest action, and Martin’s grid paintings. “A grid is always two things at once,” Laing writes, “a door onto empty space and a mesh or cage. Does it let you out or hold you in?”

The body is its own cage, she suggests, drawing on Reich’s notion of character armor, the idea that our emotional histories linger, locked up in our bodies. Grounding this analysis in the personal are her experiences of what might be called dysphoria. “At the time, my own gender was like a noose around my neck,” Laing writes in a short section about first seeing cabaret artist Justin Vivian Bond, whose transformative performances she credits for loosening that constriction. “I was non-binary, even if I didn’t yet know the word.” These and other moments of autobiographical writing—including scenes of her life in the climate-justice movement—augment and personalize her analysis. But mostly, as she does in her other books, Laing focuses on the biographies of others.

For all its big-minded large-heartedness, Everybody advances with a curious, even endearing modesty. Though this book does both, Laing is more concerned with excavating insights from her subjects’ astonishing lives than she is with supplying us with a new framework for theorizing freedom. Indeed, she seems aware that her claims about freedom are rarely surprising. “I am certain,” she notes drily, “that civilization has not yet provided equal levels of security for all bodies, and nor has it limited their freedoms to the same degree.” Other conclusions—for one, that the pursuit of freedom must be a shared endeavor—may be similarly familiar. But Laing is not, à la Reich, claiming to have discovered how to heal the world. In this time of what she calls “the old bad news of bodily difference,” she’s refreshing some old good goals within a new context.

In some ways, this book is a companion to The Lonely City (which did cry out for a friend). Where that earlier work concentrated on the stinging despair of social isolation, Everybody devotes itself to the swarm: to collectivity and freedom movements on the macroscale and to intimacy and care on the micro. The latter is perhaps best illustrated by Reich’s use of therapeutic touch, which for many patients brought about an emotional release “often accompanied by a pleasurable rippling feeling”—what he called streaming. Laing’s prose has a similar effect: a cool touch, compelling a stirring vitality.

Megan Milks is the author of the novel Margaret and the Mystery of the Missing Body, forthcoming from Feminist Press.