Ant legs, Beckett, and the OED: the writer offers an expansive collection of her nonfiction. 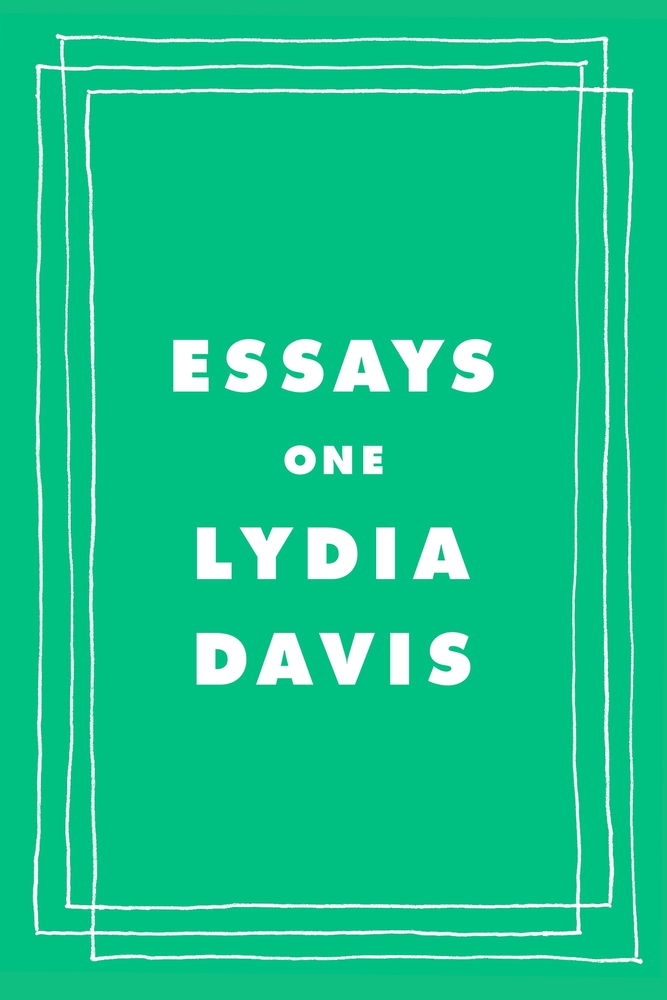 Essays One by Lydia Davis is a master class in literature from a genius. After finishing the book, I was unable to write the previous sentence without a stab of self-consciousness. Davis has made a career of dramatizing such stabs, across numerous story collections and one novel, The End of the Story. I can imagine her characters interrogating the terms master class, literature, and genius—and it would take Davis only a few lines to turn their queries into a compelling narrative. That doesn’t sound like much fun to read, but Davis makes it so. She’s an accomplished translator (most famously of Proust and Flaubert), with the requisite attention to language’s subtlest shades, but she also enjoys stilted expression and linguistic misfires, using both to great advantage in stories that seriously delineate laughably granular—and often circular—concerns. Her best work shows how humiliatingly childlike our best thinking often is. Take the poem “Head, Heart,” a perfect seventy-one-word evocation of loss, which ends with a whimper: “Head is all heart has. / Help, head. Help heart.”

This volume, which collects occasional nonfiction dating back to the late 1970s, gives us the backstory of her genius: the books read and translated, the paintings admired, the habits of mind diligently developed, the assorted bits of life that made their way into her art. Davis cops to her influences (a wide array that includes Beckett and Kafka and Bernhard and poet Charles Reznikoff), reviews writers and artist (Lucia Berlin, Jane Bowles, Joseph Cornell, Joan Mitchell), gives writing advice that’s more like kitchen-table counsel than seminar-room pontification, and explains in Davisy depth how she wrote certain stories. And yes, there are a few very short, extremely niche pieces, like a page-and-a-half exploration of the word gubernatorial. Throughout, she returns often to her core interests: the wavering boundary between poetry and prose, the aesthetic possibilities of incomplete ideas, and the mercurial movement of thought and feeling.

Reading Davis, you notice your own wild mind laboring in the background. While George Saunders, Nabokov, or Knausgaard might make eager upstarts mar their prose with pale stylistic mimicry, Davis inspires subtler copycat ventures: a writer might muse over why those three authors were listed in that order, why they’re all men, or why only George Saunders has a first name. Indeed, following along with Davis’s thought is taxing, and it’s no small relief in Essays One when she admits that she doesn’t understand something. True to form, she illuminates her incomprehension brilliantly.

The book is diverse and discursive and extremely hard to summarize. But the bountiful essay “Sources, Revision, Order, and Endings: Forms and Influences III” feels emblematic. Davis begins by revealing the genesis of her autobiographical fiction “The Walk,” which takes place at an Oxford literary conference and concerns a Proust translator. It’s all very interior—the action, such as it is, reaches its modest climax when the protagonist nearly sets off a fire alarm. Davis reports that the piece sprang from five separate notions: her wish to pen a “traditional” short story (as opposed to her more experimental bent), her admiration of Oxford’s appearance, her curiosity about how the Oxford English Dictionary was created (you couldn’t dream up a more typical Davis preoccupation), her pique at a critic’s remark about her Swann’s Way translation, and her intuition that the walk “paralleled or alluded to” the one in the first volume of Proust’s masterpiece. Davis describes the process of writing “The Walk” conversationally—and with many detours.

Some of the digressions, in short: thoughts on the impulse to translate, an explanation of how to transform a stray email into a story, a discussion of Gerard Manley Hopkins, information about the Norman Conquest of England in 1066 (a date Davis insists we remember), “just a few lines from the beginning of a poem called ‘The Battle of Brunanburh’ ” (circa 937 CE), a close reading of one sentence in the Declaration of Independence and of two drafts of “Head, Heart,” which ends with sensible advice: “Do work hard on the very last words.” I left the essay inspired and awed, energized by fresh prospects, though it’s hard not to also feel irredeemably lazy in comparison with Davis. I was also struck by her voice. She’s earned the right to be oracular, but refrains, instead adopting a humble and helpful tone: she just tells you what she thought at each step of the essay and what she did next, like a skilled engine mechanic describing an improvised solve on the side of the road.

Though she conscientiously reads life’s tiniest footnotes, her vision ends up feeling expansive. In an essay on good writing habits, she suggests asking questions like: “At the Culinary Institute of America, how do they teach the students the right way to uncork a bottle of wine? When you blow on an ant, trying to move it, and it doesn’t move, why is it so good at bracing itself? Does it have strong little muscles in its little legs? Why, exactly, does power corrupt?” Instead of googling ant leg muscles, she recommends wondering about it, theorizing, analyzing your own knowledge, “picking up clues,” opening up “yet other avenues of interest.” It’s astonishing to watch Davis cut from little legs to corruption—it’s even better when you catch yourself doing something similar. Essays One demonstrates that reading and writing are not just what happens on the page, they’re what one does in the world—holding sensation for an extra beat and cross-examining it, noticing everything despite everything else.

Though Davis’s output seems very different than Proust’s, at least judging by character count, the writers are kindred spirits, acolytes of what the uncharitable—maybe that’s just a synonym for dense—call “overthinking it.” In The Captive, Proust memorably remarked that the “only true voyage of discovery . . . would be not to visit strange lands but to possess other eyes”—a quote to pin to your mood board that also helps illustrate why Essays One feels freeing. But I think another of Proust’s observations better captures what’s going on with Davis in her many guises: fiction writer, poet, essayist, translator, teacher. Proust wrote that great authors “refract through various mediums an identical beauty which they bring into the world.” Davis refracts the singular beauty of boundless curiosity and care.