Lives and livres: in his book-world latest, director Olivier Assayas eyes the anxiety of relevance. 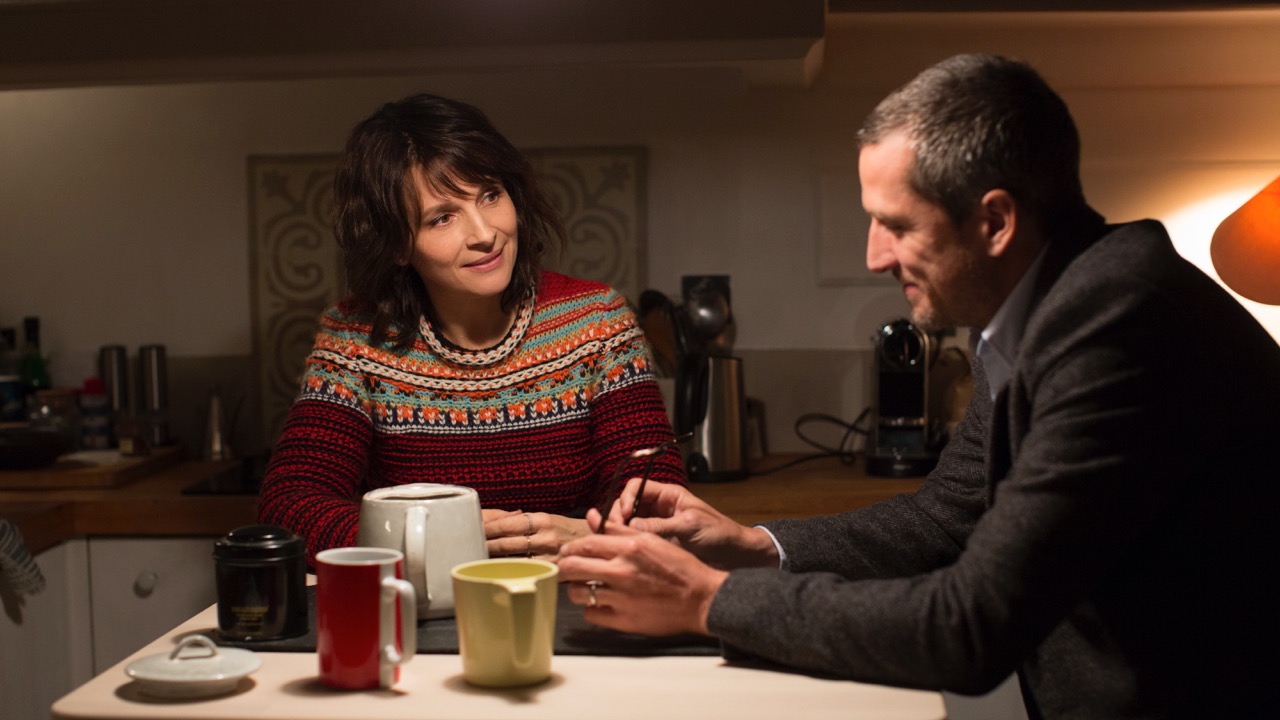 Non-Fiction, written and directed by Olivier Assayas, now playing in New York and opening May 10, 2019, in Los Angeles

The films of Olivier Assayas represent a kind of continuation of the questing essay through the vehicle of polyvocal narrative fiction. The tradition of the critic-turned-filmmaker is stronger in France than it is here in the United States, but in the case of Assayas the distinction between professions is unusually porous. His apprenticeship as a director overlapped with his time as a young critic at Cahiers du cinéma. As a writer he was fascinated with the way technology was changing the face of filmmaking, and as a filmmaker he has retained the concerns of a critic regarding culture and its commodification.

This has taken the form of films that have at their heart such disparate topics as the collision of young Asian pop cinema and a European radical art grown long in the tooth (Irma Vep, 1996), the vicissitudes of a Limoges porcelain factory entering the efficiency-mad twentieth century (Les Destinées, 2000), and the museumification of national heritage (Summer Hours, 2008). Assayas’s strength as a dramatist, rather than cultural theorist, has been his ability to create frameworks that allow his characters to address these issues as a natural outgrowth of their professional lives, thereby creating nuanced and changeable humans rather than human-shaped vessels labeled with the single trait that they are meant to embody (“old-guard reactionary,” “honest laborer,” “revolutionary,” etc.).

Assayas’s films have been distinguished by a discursive camera style that aims to transcribe the hectic pinball energy of modern life, but in them ideas are as much in motion as restless bodies and tradable assets. When, in 2014’s Clouds of Sils Maria, Juliette Binoche and Kristen Stewart go tit for tat arguing over superhero movies, it’s not a chance for Assayas to chalk up a decisive victory or practice a dialectic, but a wholly feasible conversation between a bright millennial acclimated to her pop environment and an actress nearing fifty anxious over the continued relevance of the cultural ideal to which she’s devoted her life, as she watches her audience transform into “a sea of gray hair.” 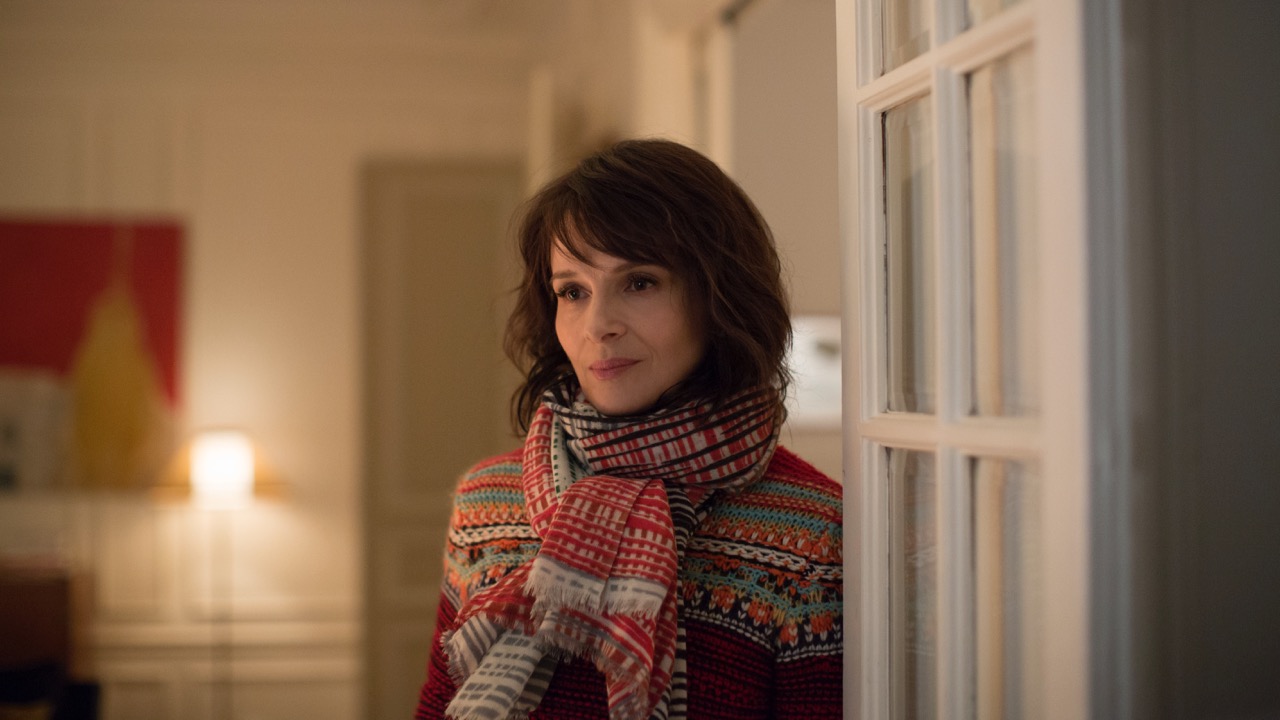 This anxiety over relevance returns in Assayas’s latest, Non-Fiction, as does Binoche, playing another highbrow actress brought low by the market, here deliberating over returning for a fourth season on a television policier and keeping a straight face during perhaps the biggest needle-scratch namedrop of an on-screen actor since the “He looks like that actor—Ralph Bellamy” moment in His Girl Friday (1940). Binoche’s Selena is married to Alain (Guillaume Canet), the editor of a venerable Parisian publishing house. In the film’s first scene he bickers amiably with Léonard (Vincent Macaigne), one of his authors, a roman à clef specialist with Žižekian grooming who cannibalizes his affairs for his fiction, and whose latest manuscript Alain is preparing to nix for publication. Even before this rejection Léonard is doom-and-gloom about the future of the written word, while Alain is more sanguine, maintaining that thanks to the internet, “more people write, more and better,” and finding in Twitter only a continuation of the sharing of bon mots in the ancien régime. 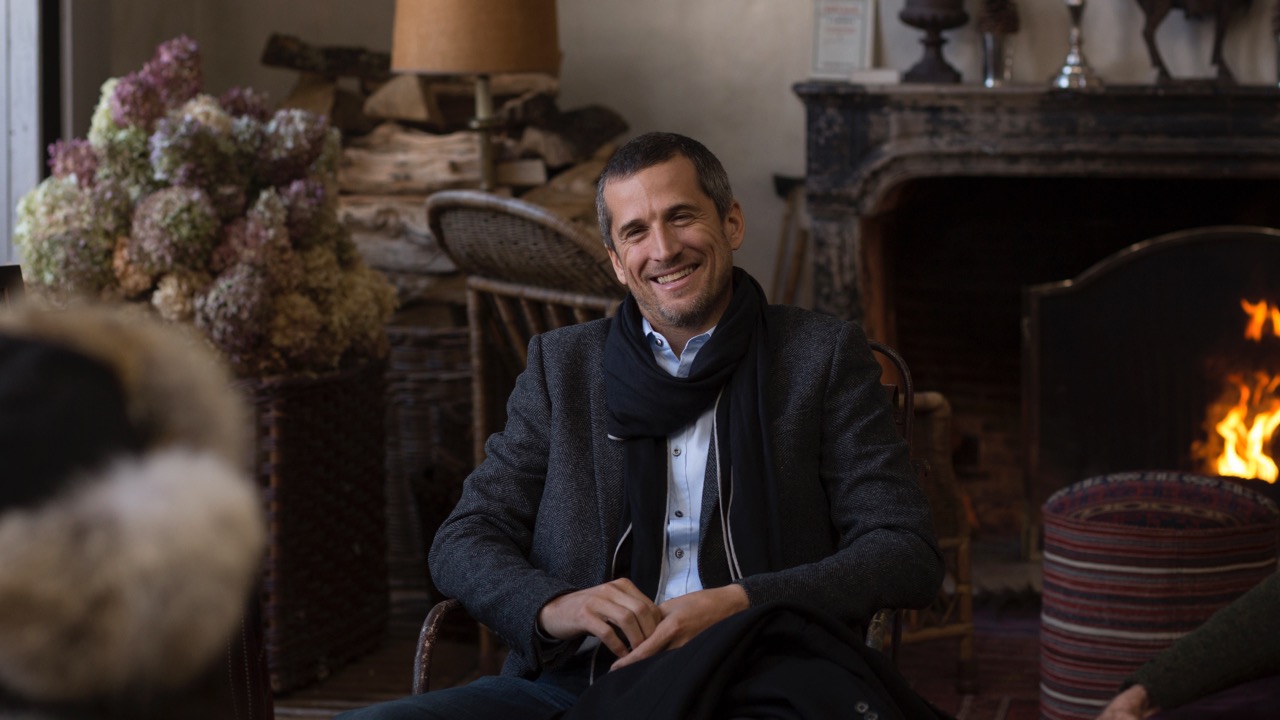 If Alain seems susceptible to the techno-utopian line, toying with the prospect of eliminating physical books from his operation altogether, we soon discover one possible reason why: he’s sleeping with his company’s newly hired twentysomething head of digital transition, Laure (Christa Théret), who’d just as soon be done with all that messy business of wood pulp and binding. As the affair moves toward its close, though, Alain begins to sound more and more like the tech-skeptic Léonard—which isn’t all the two men have in common, for Léonard, in a long-term relationship with a political aide, Valérie (Nora Hamzawi), has drawn his new material from his ongoing affair with Selena, who oh-so-gently prods her husband to go ahead and publish Léonard’s latest, really, it’s his best in a while. Assayas is interested in seeing not only how these characters paddle along with (or against) the currents of the oceanic, macro-scale culture market—the owner of Alain’s publishing house (Pascal Greggory) is tempted by a buy-out offer from a tech company—but also how their micro-scale market of sex and sentiment creates its own little ripples within that ocean, the way convictions bend with infatuation and ideas get passed around like STDs. 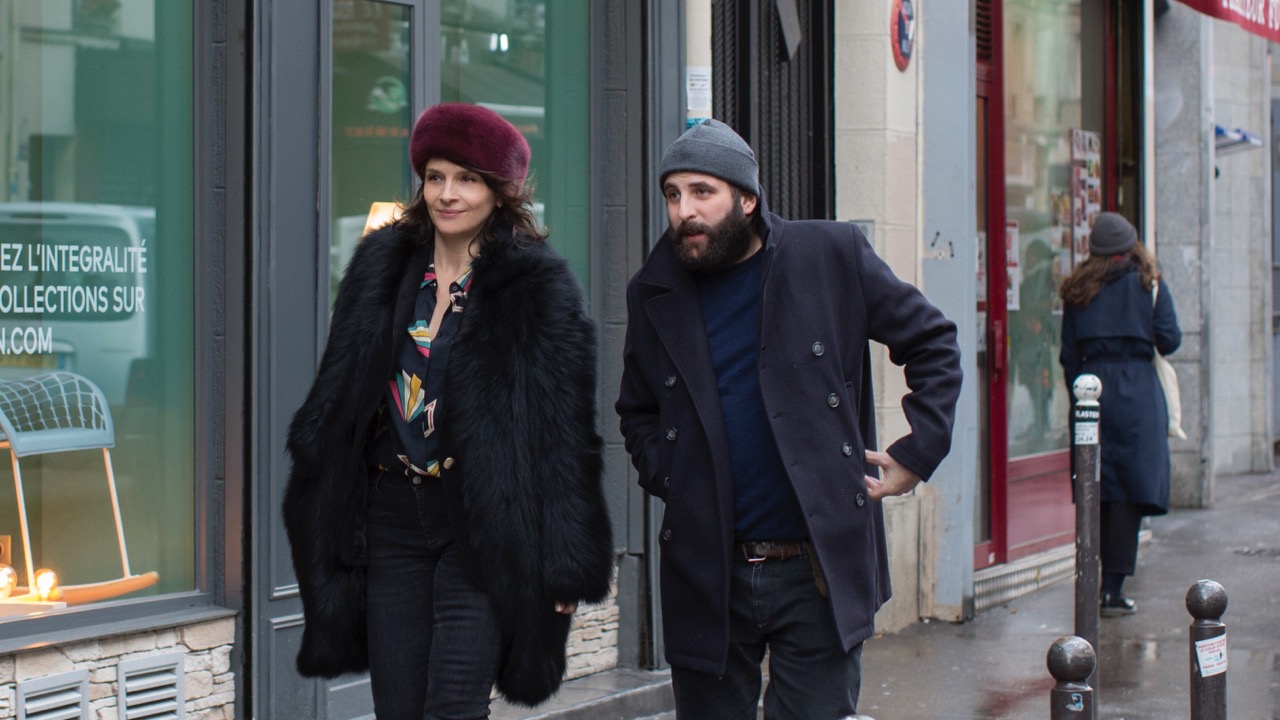 Impending crisis is in the air in Non-Fiction—the collapse of an industry, the uncovering of infidelity—but we get no fatal convulsion or burned-bridge breakup, just the mend and make-do that typifies lives too settled into habit to change. This isn’t Assayas’s first film to explore the compromises endemic to shoring one’s self up for middle-age—Late August, Early September (1998) and Clean (2004) come to mind—but compared to the velocity of his earlier contemporary-set films, it’s a decidedly sedentary affair. Non-Fiction is a movie of people mostly sitting and talking in offices, apartments, restaurants, and bars; the film’s most flamboyant stylistic flourish is shot–reverse shot dialogues in which the camera violates the 180-degree rule and switches sides at a pivotal moment, as when Selena breaks off her six-year affair with Léonard during a brief midday coffee meeting. (That most work-attuned of filmmakers, Assayas always has a sense of modern life as something lived in the thin-slice interstices of a packed schedule.)

The mirror-image effect contained in this framing about-face is better conveyed via the film’s French title, Doubles vies (Double Lives), as is the twinning inherent in the movie’s parallel two couples, two affairs structure—and the sense of Janus-faced imposture that runs throughout it. Alain, Selena, Léonard, and Valérie each in their own way hangs on to an idealistic conception of their work, and each will be confronted with the hypocrisy concomitant to claiming idealistic exception in a world where everything is a material commodity—a fact that each of them must be repeatedly, rudely reminded of. When nothing exists beyond the market, marketing is king, and optics vie with experienced reality for importance—a state of affairs that the poorly media-trained Léonard, made vivid through Macaigne’s splendidly rumpled characterization of an avowed technophobe who can’t stop fiddling with his phone, is uniquely unsuited to, skirting being canceled throughout the film. 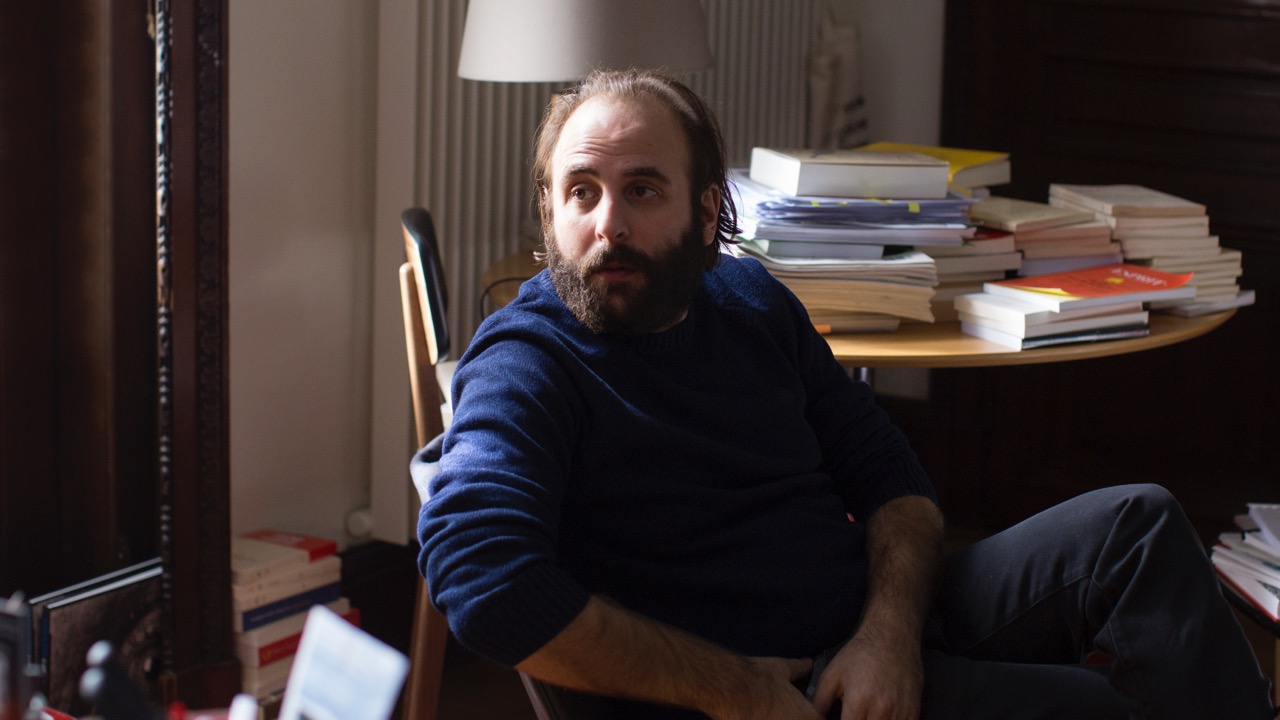 The outlier here is Laure, the movie’s youngest major character and the only one of age to be a digital native. Though no more master of her own fate than anyone else, she has the techie’s tendency to believe her preferred vision for the future a foregone conclusion—“Today’s world in a nutshell,” Alain gripes, “No one asks us, then it’s too late”—but she at least is relatively free of internal conflict, knowing the new rules of the game. (The usually reliably contemporary Assayas gives his digital sans-culottes behind-the-curve dialogue: it’s hard to buy anyone still talking today about “digital technology democratiz[ing] access to culture” with the zeal of a new convert.)

Non-Fiction ends not with a decisive victory for belles lettres or the feuilleton tweet, but with a retreat to the last redoubt of the real, a seaside getaway that most of us have by now been trained to identify as eminently Instagrammable. The end may be near, but it hasn’t come yet, and in this sunset idyll there is something of the nostalgia of Talleyrand: a declaration that one who did not live in the years before the online revolution cannot understand what the sweetness of living is.