A wide-ranging collection spanning the 1700s to present day demonstrates the elasticity, and open-endedness, of the form. 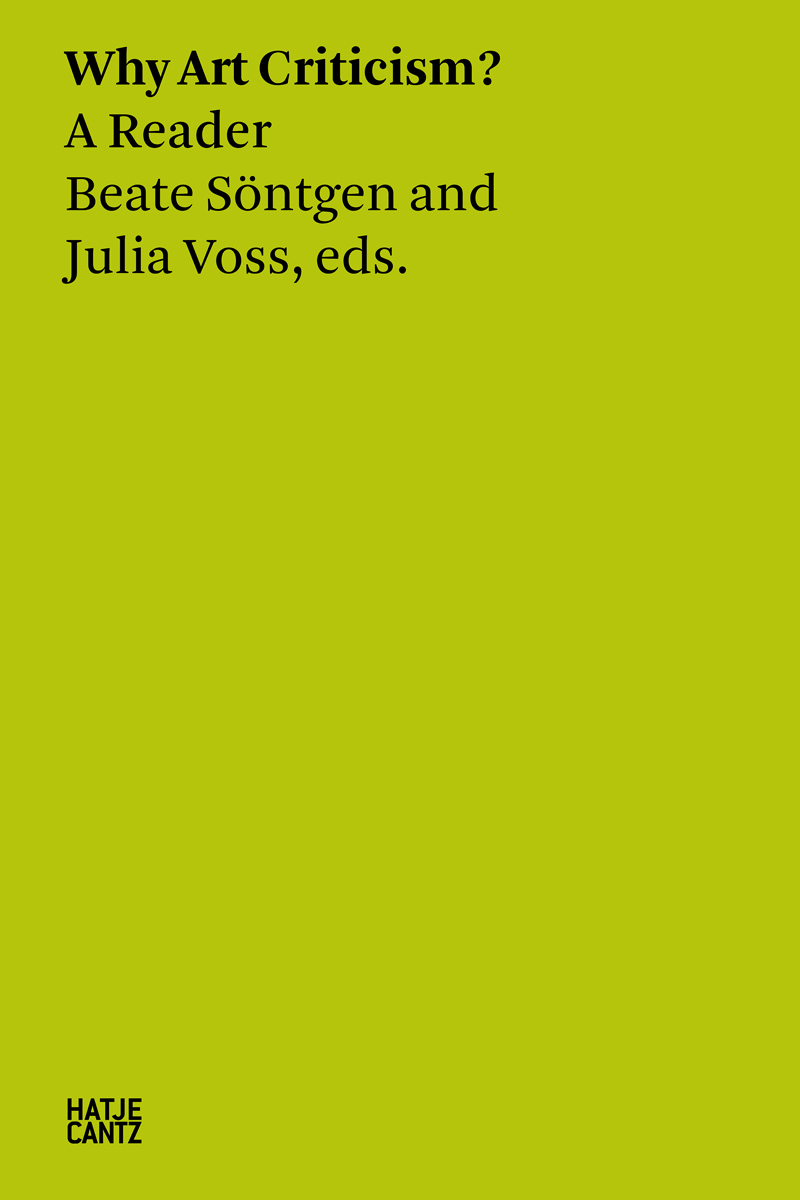 The title sounds like a plea: explain yourself, art criticism—what have you gone and done now? If so, Why Art Criticism? is named with deadpan style. This reader, edited by art historians Beate Söntgen and Julia Voss, presents extracts by forty-five writers whose work, arranged in chronological order, spans 258 years. (These—appropriate disclosure—include 4Columns contributor Aruna D’Souza.) We move from Denis Diderot’s salon review to Jennifer Higgie’s Instagram post, Marxist-inflected analyses to playful imaginary dialogues. The editors know this menagerie is too various to control. The aim, they write, is a “taxonomic account” of art criticism to date, not a “history or genealogy”: histories and genealogies have inherent ends, but you can extend a taxonomy as far as you need.

Leafing through space and time, you start to form airy opinions about who’s in and who should have been out. It’s hard to see why historian Ananda K. Coomaraswamy is the sole writer appearing twice, or how Stefan Germer, whose brow could be high or low, is done justice by the excerpt here. Conversely, you have to love Sergei Tretyakov and his Constructivist mania. The Soviet writer tells us that “in struggling against the professional photographer we are fighting against the habit people have of lying about themselves” and declares that some trees in the USSR rot “irresponsibly.” Why Art Criticism? can be elastic—Mark Sinker’s piece on Afrofuturism is about jazz, or whatever you call Sun Ra—and even a little strange: Roland Barthes defines disgust as a “panic erection,” then compares it to cooking, and Georges Bataille makes a silken reference to Miró’s work as “a kind of sunlit dust.” What I especially enjoyed, after hours in the weeds, were the flashes of offbeat wit. It’s there in Roger Fry and “Mary Josephson” (read: Brian O’Doherty); in Lynne Tillman and Hito Steyerl; and even in Julia Voss, whose takedown of Markus Lüpertz is acidic enough to excuse her including herself. Less witty, and odder in a scholarly book, is a sketch of the Venice Biennale by the late curator Igor Zabel; in his lazy, stereotypical scene, Americans in shorts want “oono cappucheeno,” Japanese men carry flashy cameras, and “useless Slovenes and Poles” throw their trash around the streets.

Before each entry of several pages is a preface of several hundred words. These introduce the writer at hand, and since they’re written by academics—Why Art Criticism? was born in 2019 of a symposium in Lüneburg—they can ascend too quickly from facts to majestic analysis. At their worst, which is often, their prose is a hymn to inelegance. “Impactful” is used as an adjective, “seismograph” as a verb. In the introduction, Söntgen and Voss declare their aversion to “generally binding critical yardsticks,” because such things are “problematic”—this word should be illegal by now—though they also disdain “the trench warfare in which different approaches to art criticism have been pitted against each other.”

This amounts to wordy proof that “readers” are akin to buffets: unlike with a tasting menu, you can skip the bits you don’t like without being rude. Perhaps you want Coomaraswamy’s The Indian Craftsman (1909), a decolonially-minded study of craftwork in British-ruled India; perhaps you want Oscar Masotta’s “I Committed a Happening” (1967), an Argentinian diary about the eponymous act. But whether in subject or manner, they’re hardly engaged in the same pursuit, and while Why Art Criticism? has plenty of range—if that was the remit, it’s a success—it feels as though, in gathering writers as dissimilar as Francis Ponge and Patrick Mudekereza, and separating their work with prefatory cordons sanitaires, the editors have turned a party into a grand but cold museum. That museum might be hard to augment—though personally, I’d have added Frank O’Hara, James Elkins, and Vernon Lee—but the issue is the way it’s arranged. According to the editors, they’ve tried “to bring diverse voices and perspectives into conversation with each other,” yet it’s unclear how such a “conversation” works. Since these extracts aren’t inherently linked—readers have orders, not plots—the task of divining what they’re saying to each other is a delicate, doubtful thing. Within a few pages, your attention settles, you’re becoming absorbed by what you’re told—then a preface breaks the spell, ushering you out and toward what’s next.

The fitfulness of the format just makes you judgmental instead. Hustled from writer to writer, you blanch at the cryptic, or abstruse, or bad. For every Tillman or Zabel, there’s a Germer, offering a “thesis” on “postmodern” art critique that’s comprehensible but grimly phrased: “Norms for the sphere of art production will in the future . . . be neither qualitatively determined nor able to claim absolute validity.” Maybe it was sexier in the original German, and Germer wasn’t always in such a mood, but you don’t have to be bullied by writing like this, by its implicit belief that its specialization makes it special somehow. Style, among other things, is a matter of mutual respect.

That, if you aren’t seeking a reference guide, is the value of Söntgen and Voss’s book: it’s a handy primer on the uses and abuses of art-critical prose. It mightn’t be as fashionable as analyzing, say, ideology, but it’s just as instructive, and maybe more: the humanity of a voice consists in its tone, an affective quality that you misunderstand if you treat speech as information and the public as receptacles. When Fry takes a scalpel to the paintings of Lawrence Alma-Tadema, calling them “very good, pure, wholesome margarine,” the invective is lively not just because of the image, but because its rhythm has vicious grace. I might not agree with him, just as I might disagree that Vanessa Bell’s paintings are worth my time—but agreement is by the bye. Enthusiasm is not a thesis, but an affair of the heart.

Cal Revely-Calder is a senior arts editor at the Telegraph. He has written for Artforum, the Nation, and the White Review, and is working on a book about melodrama.