Nonfiction
A Short History of Tomb-Raiding

They did it all for the nookie: revelations and transgressions in a book on Egyptian grave looters over the ages. 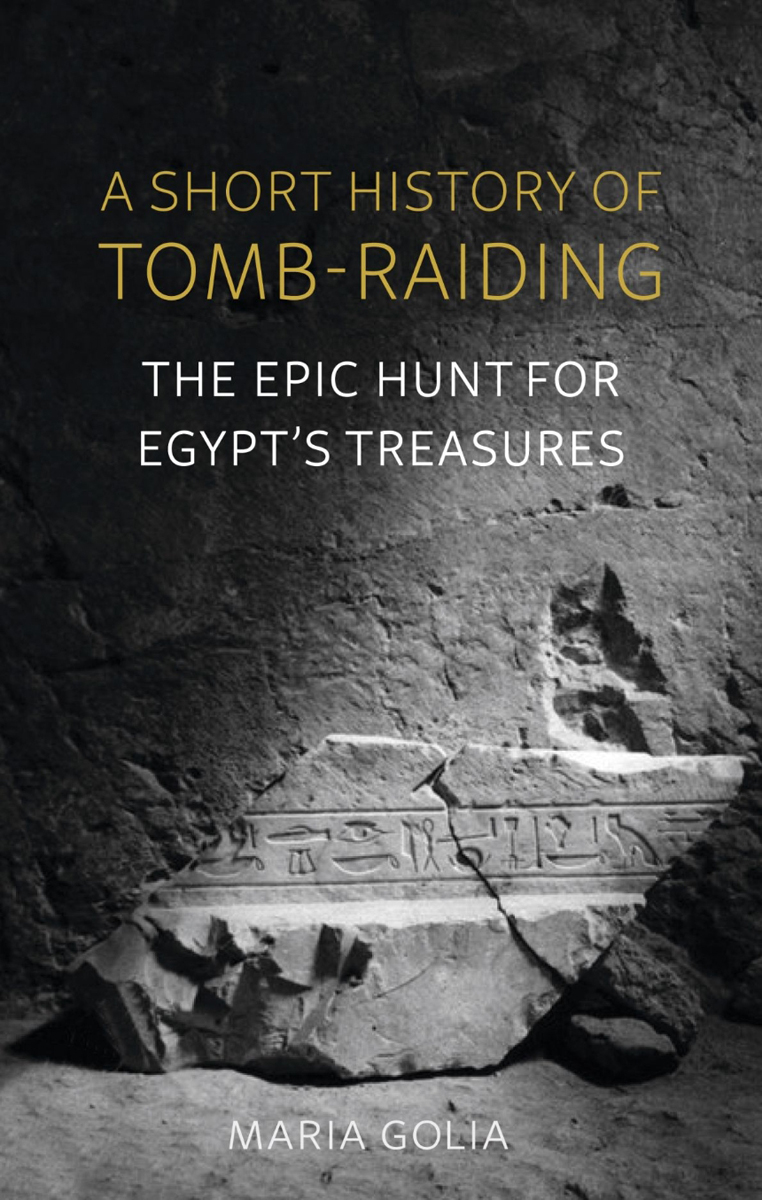 Whatever Maria Golia writes about, she’s really writing about wonder. Her book on Egyptian photography (2009) overflows with images of zeppelins over Islamic citadels and rubber men doing handstands from the top of Cairo Tower. Her biography of Ornette Coleman (2020) hails the saxophonist-composer of The Shape of Jazz to Come for showing that music is “a territory beyond the reach of the mundane.” Her meditation on meteorites (2015) celebrates them for providing “samples, free of charge, of the moon and Mars.” Now, in A Short History of Tomb-Raiding, she has created a treasure house that teems with wonderful stories, both extraordinary and plaintive, of banditos, bathos, feats of daring.

Mummies are at the heart of this five-thousand-year-old saga. In Golia’s telling, mummification was not just a family business whose techniques were jealously guarded but also a studio practice, a cosmetology, an unfolding series of horror tableaux. Her embalmers (known—alarmingly—during the Greco-Roman period as “slitters and curers”) were avant-garde chefs: washing cavities with palm wine, injecting anuses with juniper oil, deodorizing corpses with lettuce and castor oil. The brains of dignitaries were fished out with hooks via their left nostrils. The dead, meant to cut a dash in the afterlife, were given wigs and hair extensions. Facial treatments too: Ramses II had his nose filled with seeds, while Ramses IV had onions inserted beneath his eyelids.

The science underpinning such procedures was shaky. Faces sometimes burst after being filled with sawdust and mud. Toes and fingers fell off during the drying period. Inquisitive mice and lizards would get trapped in the body wrappings. But, Golia suggests (and Linda Evangelista would surely agree), it would be premature to dismiss such stories as mere premodern phooey: “Nowadays women seeking eternal youth and vaginal elasticity turn to the Internet, spending substantial sums on ‘jade eggs to harness the power of energy work.’ ” Her book often brings to mind Jessica Mitford’s The American Way of Death (1963), which caustically itemized the likes of “Nature-Glo—the ultimate in cosmetic embalming” and “Futurama, the casket styled for the future.”

Mummies were precious commodities (some Egyptians ate them in order to live longer, wrappings were used as grocery paper or as “vintage” fabrics), but so, potentially, was everything else in the tombs: dolls, shields, pets, board games, scarabs, jewelry, texts, silver, gold. Royal tombs were paradoxical—“defence structures designed to shield wealth and advertise status,” writes Golia, adding that pyramids “screamed ‘x marks the spot.’ ” To impoverished or famine-stricken Egyptians, as well as to career criminals, the tombs were gifts that kept on giving. To stymie them, architects used dummy shafts, secret rooms, decoy passages, thirty-six-ton stone trapdoors, but these were effective only for so long. Some tombs were robbed before they were even sealed. Over time, everyone—priests, military generals, and archaeologists—became a fracker.

Over time, too, near-occult treasure manuals began to circulate. Offering readers precious tips on how and where best to strike gold, they instructed them to wear apple-wood clogs and “high boots covered with felt soaked in essence of violet,” and to carry “lanterns . . . including special wicks soaked in rapeseed oil, goat fat and ‘oil of crow.’ ” The directions they gave were often surprising (“find a field ‘planted with five-hundred watermelons’ that can be turned into silver and gold if set on fire”) or a touch vague (“North of Batanun . . . there’s a building in plastered brick,” which, Golia points out, was “the material used for nearly all buildings”). Were those who followed these manuals any more gullible than someone investing in NFTs today?

Tomb-raiding, born of greed and desperation, the possibility of violence never far away, is rarely seen as a comic affair. Golia is the drollest of writers, though, presenting vignettes of a donkey called Moon, pharaohs who sported bull’s tails hanging from their backsides, a Cairo whose streets were populated by professional fartistes. Looters were often motivated by sex (they needed money to marry) but also by a thirst for kicks and fun. Their creativity knew few limits: by the tenth century AD, conmen were reputed to fleece wide-eyed outsiders by planting gilded keys and nonsensical hieroglyphics inside abandoned caves and littering floors with artificial snakes that had mercury-filled eyes and whose mouths spurted fire when stepped upon.

In A Burglar’s Guide to the City (2016), Geoff Manaugh suggests that “burglary is topology pursued by other means,” a form of place-hacking based on seeing landscapes in terms of “shortcuts, splices, and wormholes.” Later, after his in-laws’ home is broken into, he wonders if he has been too intellectual or too romantic. Perhaps burglars are less like heroic explorers or Dr. Livingstone figures than they are “human mosquitoes”? Golia herself posits analyses both materialist (“Raiding redressed the inequity of the social order”) and metaphysical: “More than thieves, they were transgressors, the original outlaws in the most precise and thorough sense of the term. In a world devoted to order, raiders were on the side of chaos, in conflict not only with society’s treasured traditions but with its fondest hopes for itself.”

Chaotic looting flared up in Egypt time and again over the millennia. For a reason—Golia astutely juxtaposes a Ramses III–era tomb scribe lamenting the destitution of much of the population with a Petrojet employee in 2012 who wails, “The company . . . has leeched my blood . . . Save me, hunger has consumed my guts.” Amid the financial crisis of 2008, there was a spike in illegal digging, and the homes of eleven families in Cairo’s Giza Plateau collapsed after a neighbor started tunneling for treasure.

In 2011, amid the Tahrir Square protests, many museums were looted—mummy bandages floated in the breeze, and satellite photos revealed archaeological sites that were “as pitted and cratered as the dark side of the moon.” Golia talks to ex-prisoners after they get out of jail who make it clear to her that “an appreciation for history will never be as valuable as survival, which is what makes history in the first place.”

A Short History of Tomb-Raiding concludes with a good question: “Egyptians today may still dine on the crumbs of their ancients’ table. What might we leave on Earth that will last as long and give as much? What modern wonder can compare?” It’s a marvelous and characteristically Golian note on which to end. She chronicles graft, exploitation, bittersweet laughter, the will to survive, power and its ultimate powerlessness. Beneath and beyond it all she sees—creates—a salvific wonder.