So the cows have come home—now what? A documentary brings viewers up close and personal to Luma the Holstein. 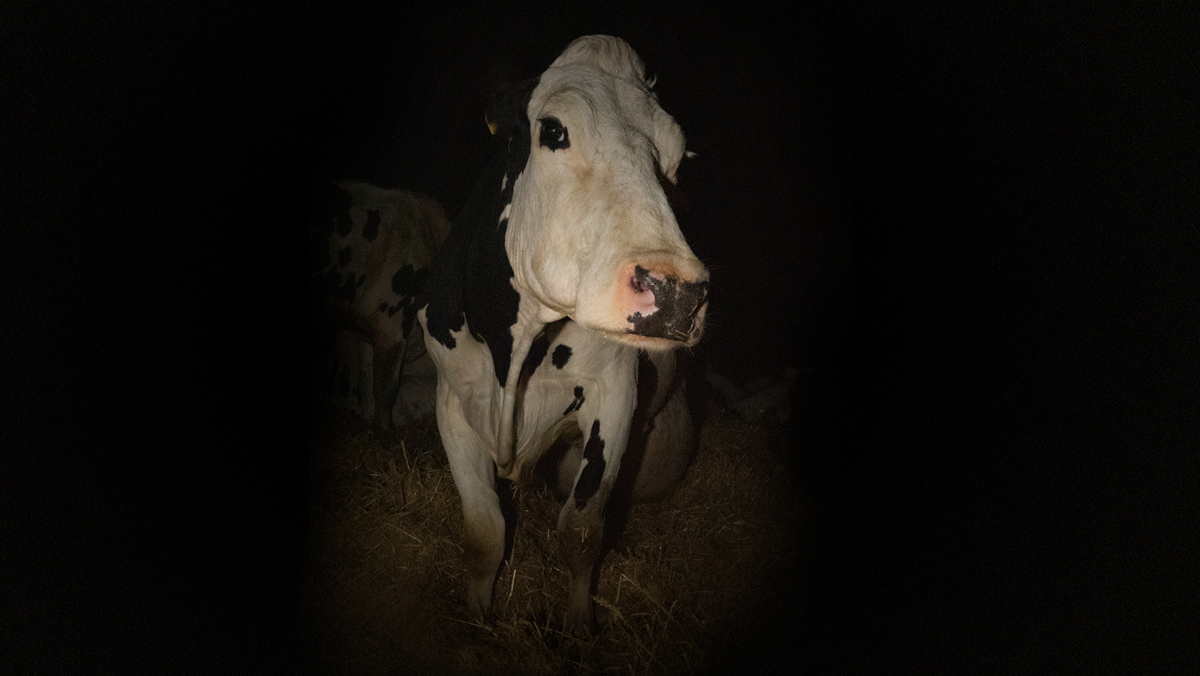 Light, shadows, flickering motion: ancient caves have been described as proto-cinemas. Among the foremost stars of the Upper Paleolithic period were cows. What was not to love about them? They gave the world calves that could be used in fields. Even their shit was precious fuel. Small wonder they cropped up on limestone walls more often than any other animals, bar horses and bison.

Alas, they’ve fallen on hard times over the past fifty thousand years. According to preeminent cow scholar Hannah Velten, “We seem to have reduced the epitome of virility, fertility and strength to a mere sperm donor, the Mother and nourisher of the world to a mere milk machine and the strong, willing ox into a beef-and-leather factory.”

Some artists still ascribe power to cows. Damien Hirst’s Mother and Child Divided (1993) features a cow and a calf, each bisected and preserved in glass tanks full of formaldehyde. “The work should attract you and repel you at the same time,” he has explained. “I see them as death objects.” 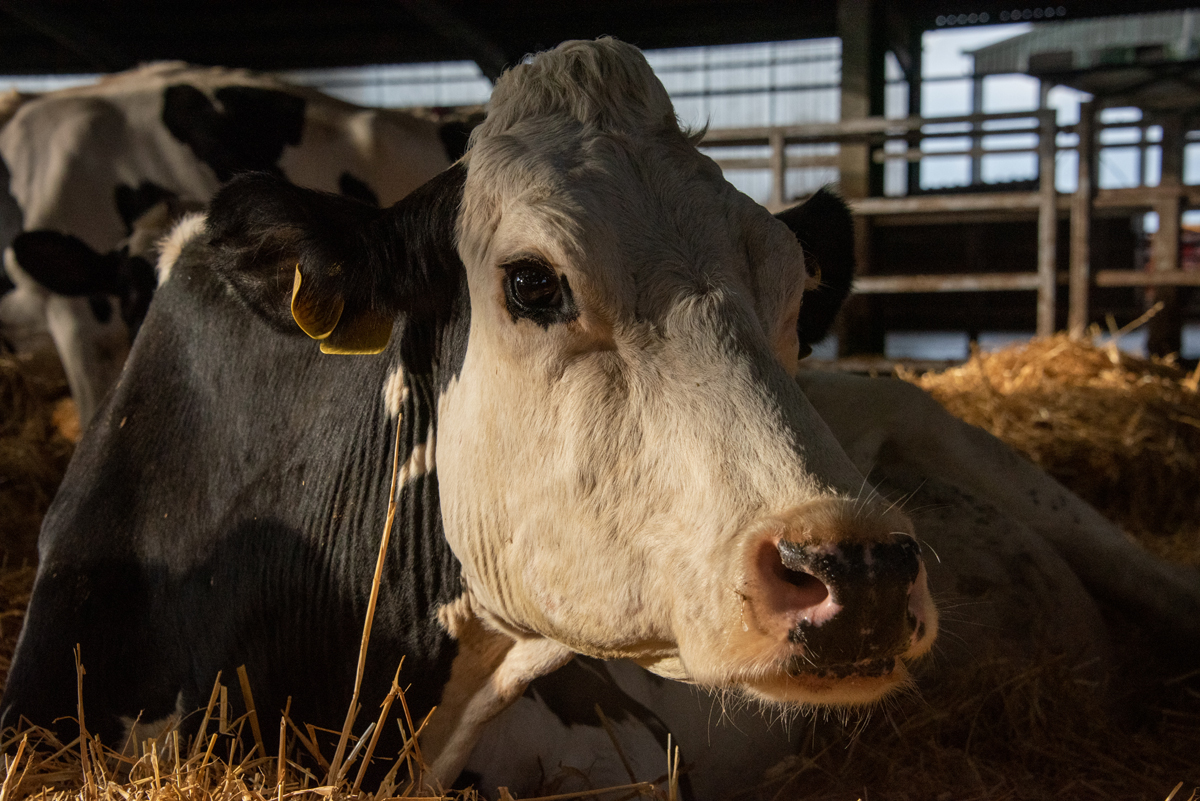 Filmmaker Andrea Arnold agrees that cows are death objects. Almost every second of Cow, her plainly titled new documentary, is freighted with the viewer’s expectation of how it will end. The cow in question is called Luma. She’s an English dairy cow. A Holstein Friesian cow. Does any of this matter? How many of us can name different breeds of cows? The scale and impersonality of modern agribusiness is such that perhaps it’s not just romantic, but a form of Cartoon Network deification to think of Luma as a singular, specific creature.

Arnold’s very first film, a short called Milk (1998), was about a woman who gives birth to a stillborn baby and, rickety with grief, has sex with a much younger man, who falls asleep sucking up her breast milk. Cow begins with a stegosaurian bellow, parturition pain, a new calf falling onto straw. Luma, her mother, gently kneads her, licks off the amniotic fluid. Soon the calf is clean, reaching up. For milk, for love, for the milk that is love. It seems, for a minute or two, that all is right with this world. Shortly after, the calf is taken away.

Endless severance. Really, what kind of world is this? The shed where Luma spends much of her days is brown, murky, all slop and slurry. It’s closer to a bunker, a dank prison, a bovine gulag. The cows trundle about. So sad—like seniors in a nursing home, urchins in a Victorian orphanage. They’re tagged like warehouse inventory. The cameras stick close, shooting them at udder level. If this grim environment feels clammy and contagious to us, how claustrophobic must it be for them? Maybe they no longer notice? Not being able to freely move has led, within generations, to a 30 percent reduction in the brain size of cows.

Then there’s the noise. Thrombotic hums, tractor engines, metallic clanks. Contraptions mechanically guzzling the milk out of the cows. Hooves being trimmed with rowdy blades. A dehorning scene in which, for a few killer-driller awful moments, it seems as if a calf is about to be trepanned. Farmers believe that music helps cows to lactate—hence Billie Eilish, Angel Olsen, downtempo R & B on the tinny PA. Soul sounds leeched of their soul and turned into performance-enhancing Moozik. 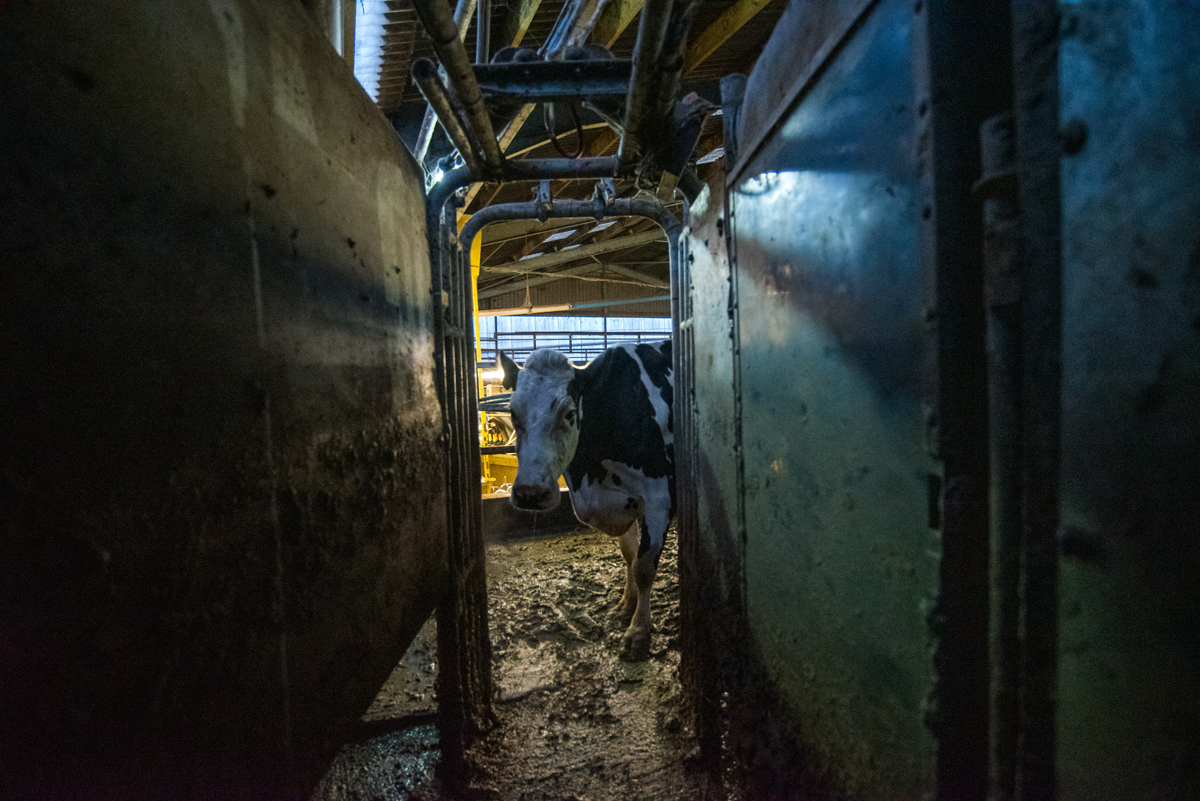 It’s when things are quieter that Cow is at its most piercing. A lengthy frontal shot of Luma in which she stares at the camera testily, like a proud, bruised street kid in La haine, like one of the working-class single mothers in Arnold’s earlier Fish Tank. “What are you fucking looking at?” the creature seems to be saying to us. In another scene, Luma’s lined up alongside and opposite other cows, who chow away at their feed; she watches them balefully, unable or unwilling to eat anything herself. She has become a conscientious objector, refusing to be complicit in a humdrum tableau she views as collective humiliation.

That’s probably what I wanted to think. Sentimental tosh? Perhaps I should have heeded the warning of John Berger in his essay “Why Look At Animals?”: “You are looking at something that has been rendered absolutely marginal; and all the concentration you can muster will never be enough to centralize it.” Arnold’s camera operators get so close to Luma that it’s possible to see their reflection in her eyes. Is that the point? That we can never truly know a cow? If anything, is it us—our indifference and outsourced cruelty—that we’re really seeing in this film? Modern, genetically modified cows bear only a passing relationship to their ancient predecessors. They’re as likely to be found in cosmetics, deodorants, and refrigerants as they are in butcher’s windows.

Arnold has little interest in political theses or frontline dispatches. This is no A Cow at My Table or Fast Food Nation. It’s unlikely that Luma’s owners would have let the director within a hundred miles of their dairy farm if they had thought she was compiling an exposé. Nor would a consciousness-raising filmmaker have had such fun with the scene in which Luma is guided toward a section of the cowshed where she’s joined by a bull whose job it is to, well, get jiggy with her. They mooch around nervously, out-of-towners at a first rave. As they begin to do their thing, fireworks light up the sky. Disco 2000.

Cow is no Au hasard Balthazar. Still, the end, when it comes, is short, sharp, upsetting. For a second or two, light suddenly floods the shed. And I was flooded by memories. Of the cows, allowed to leave their holding pens, pushing and rushing and surging out in a mass jailbreak. Their dazed exhilaration as they gallop through verdant lanes. The precious music—made by breezes and birds—that’s heard as the cows lie in flower-strewn meadows. The green grass, the blue skies. The endless skies. Room to roam. The fragile sense that another world is possible. A world in which cows can jump over the moon. I remember thinking how beautifully Luma breathed—her big, big eyes, the way she gazed into the distance, how deep in thought she seemed. And I remembered something W. H. Hudson once said: “Animals are only unhappy when made so by man.”