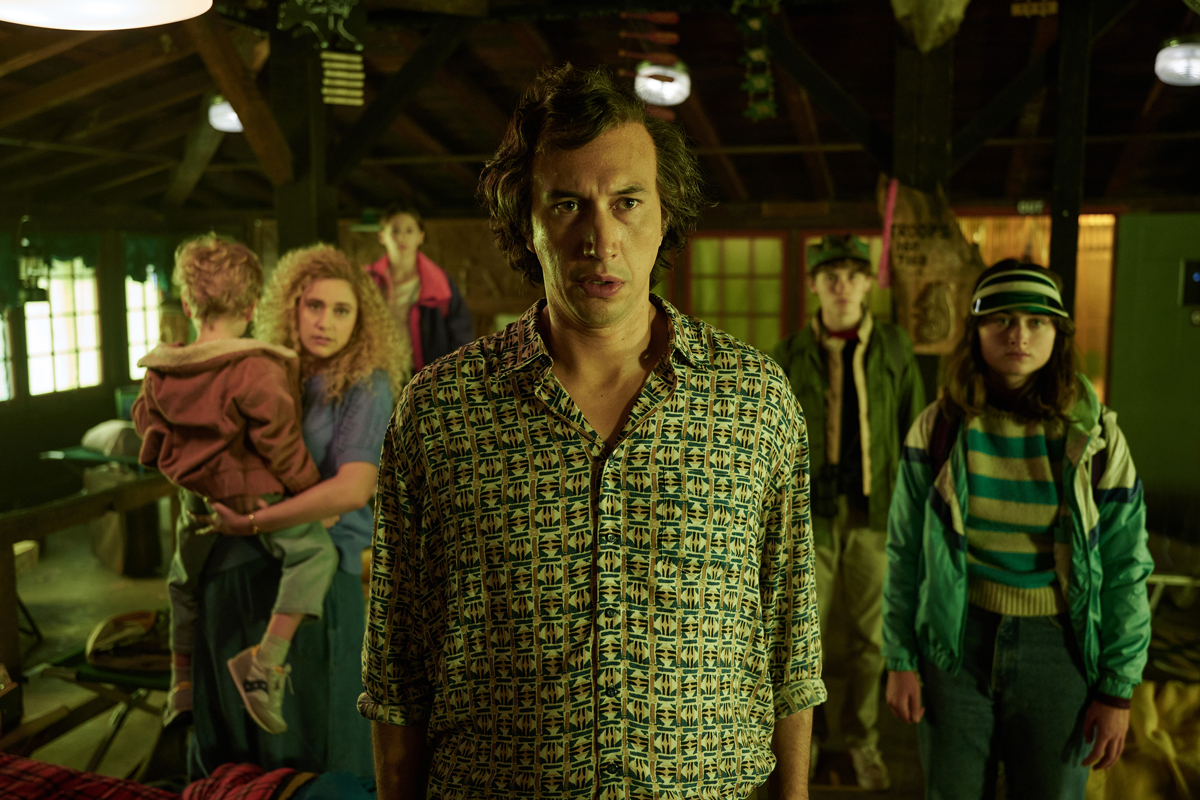 Arriving early for a November press preview of Noah Baumbach’s adaptation of Don DeLillo’s 1985 novel White Noise, I had time on my hands, too few social skills to talk to other people in the screening room, and, maybe thirty minutes after I’d last checked the news, an awful lot of headlines and texts I needed, really needed, to scroll through. Hurricane Nicole had battered Florida—barely seconds after Hurricane Ian had destroyed seawalls there. Elsewhere glaciers were melting, bodies were still being pulled out of Ukrainian buildings, something something about The Good Wife and Ron DeSantis being gay. It wasn’t clear if the Democrats had held on to the Senate. Fascism still imminent!

I felt sick, I felt high, I felt nothing. And then I got on with watching White Noise, which, set in the mid-1980s, is also about thrills, pills, and bellyaches. About data creep, life as creeping contagion. It’s a Cultural Studies bibliography rendered in 35mm: J. G. Ballard’s diagnosis of modern society as an atrocity exhibition, as semiotic influenza; William Burroughs’s fascination with the productive uses of paranoia; Situationism’s horrified ravings about media spectacle as a tool of social pacification; Jean Baudrillard’s peak PoMo announcement that “America is neither dream nor reality. It is a hyperreality.” DeLillo has always been preoccupied with cinema (in 1982’s The Names, he describes the twentieth century as “the filmed century”); Baumbach’s father was an experimental novelist. A perfect union, no? 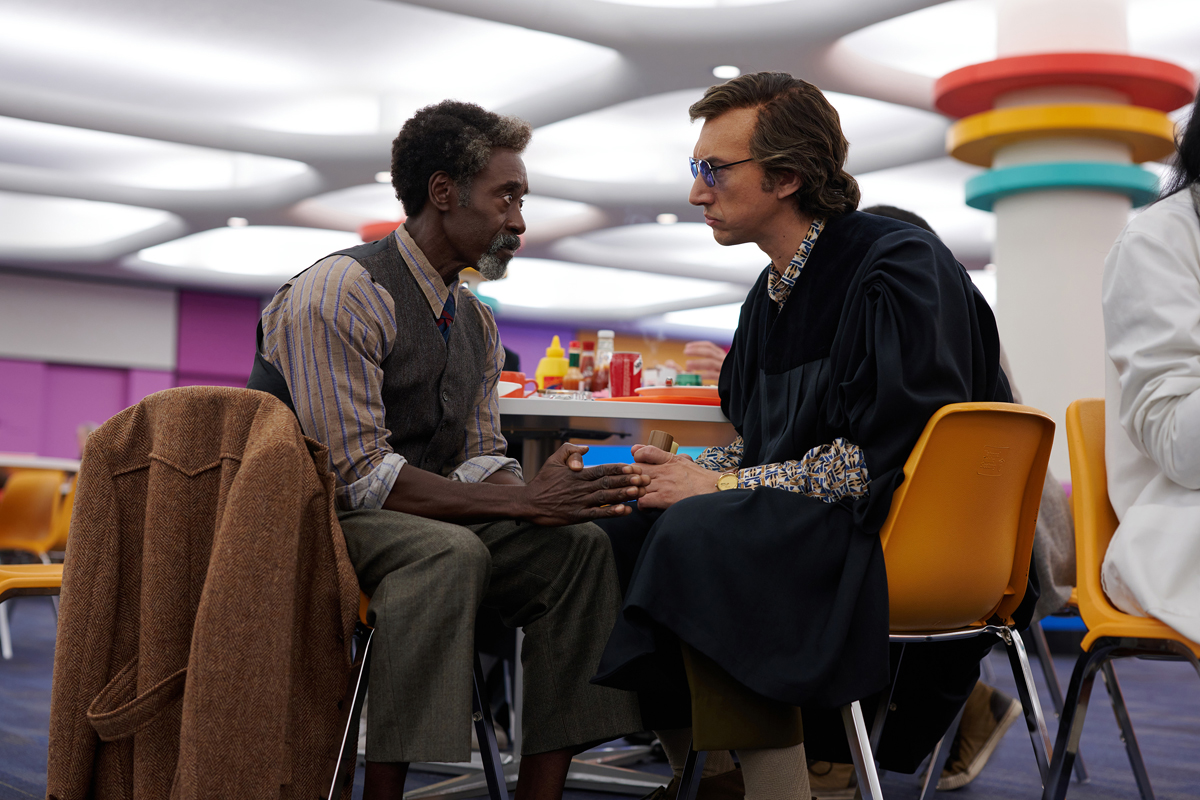 The film’s first section is titled—as in the novel, whose three-part structure it retains—“Waves and Radiation.” Jack Gladney (played by Adam Driver) is a college professor who’s a bright star in the field of Hitler studies, even though, to his own embarrassment, he barely speaks a word of German. He thinks the Führer can best be understood through psychoanalysis or as a charismatic celebrity rather than through anything so boring as politics or economics. Fame—in the time of Reagan—über alles. His colleague Murray Siskind (Don Cheadle) is an expert on Elvis, and though the pair of tenured bloviators think they’re critiquing Big Men, they also seem to be under their spell. 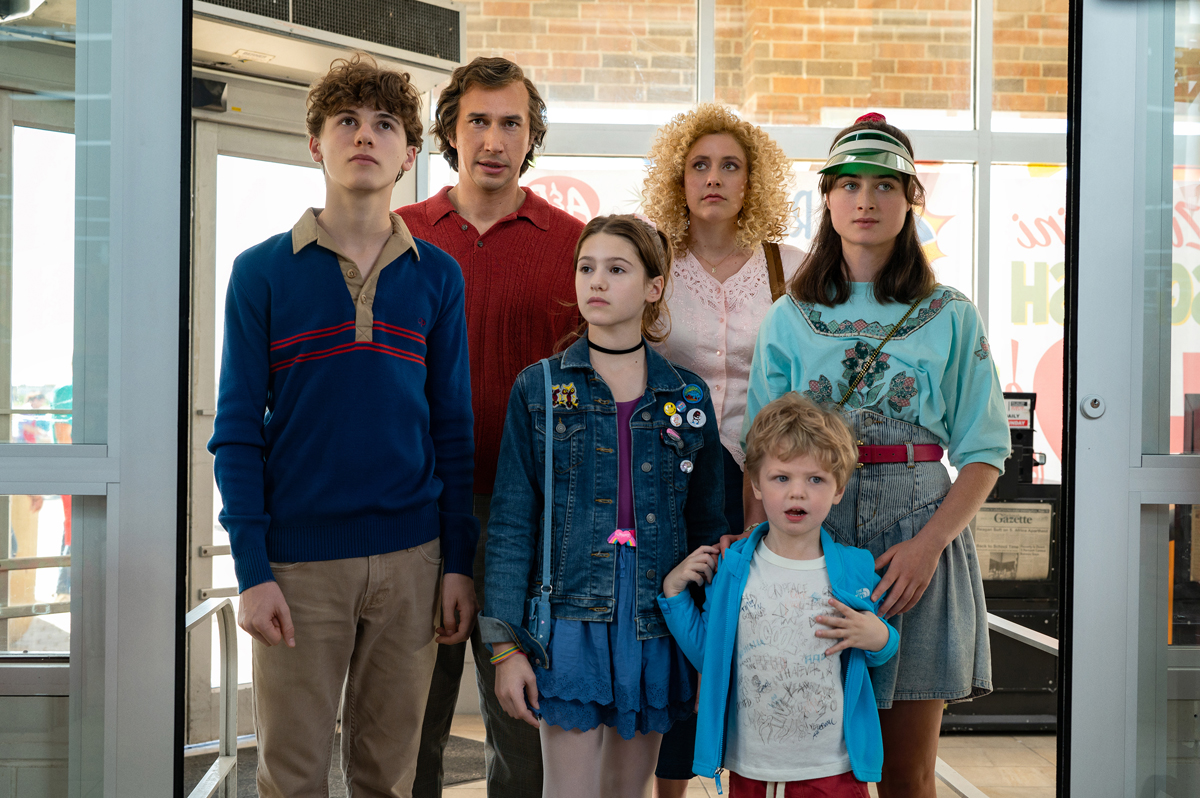 If White Noise is a campus satire (though the idea of Hitler studies would hardly be outlandish these days), it’s also a domestic drama. At home, Gladney cuts a more harried figure. He and wife Babette (Greta Gerwig), both with many marriages behind them, are surrounded by mouthy tweens and teens who macro-dose on plane-wreck footage. The kids bicker and cavil, their voices adding to the hum of refrigerators, the melodrama of multichannel news, the static of suburbia. Jack worrywarts about an upcoming conference. Babette is in slow free fall, addicted to a mysterious drug called Dylar. They’re in the realm of idiopathy: something’s wrong—something whose symptoms, not to mention its origin, are both elusive and real.

And then it happens. In lectures, Siskind claims Americans love to gawp at crashes. Now rhetoric turns real, or real-ish: a drunk truck driver plows into a train and the result is an “airborne toxic event,” a brume of poison that forces Jack and his family to flee for their lives. Cue pandemonium. Traffic jams and cloud formations that recall premillennial apocalyptic movies. Manic sequences, in which the Gladneys skelter through woods and end up drifting down a river, are straight out of Spy Kids. (Unlikely? Baumbach did coscript Madagascar 3.) Then there are subplots in which Babette has sex with a weirdo drug dealer, Jack morphs into a pistol-wielding avenger, and a German nun (a wonderful Barbara Sukowa) proves to be an acerbic apostate.

It’s a lot. Too much? Baumbach’s dialogue, much of it lifted from the novel, is often hysteric, even oftener heavy-handed. Siskind performs the role of oracle-in-chief: “We need the occasional catastrophe to break up the relentless flow of information,” he opines. Later: “Maybe violence is a form of rebirth. And maybe you can kill death.” Everyone’s neurotically jaw-jawing—fretting about mortality, the government, truth in a blurry world. We may share their concerns. We may also wish they’d shut up once in a while. 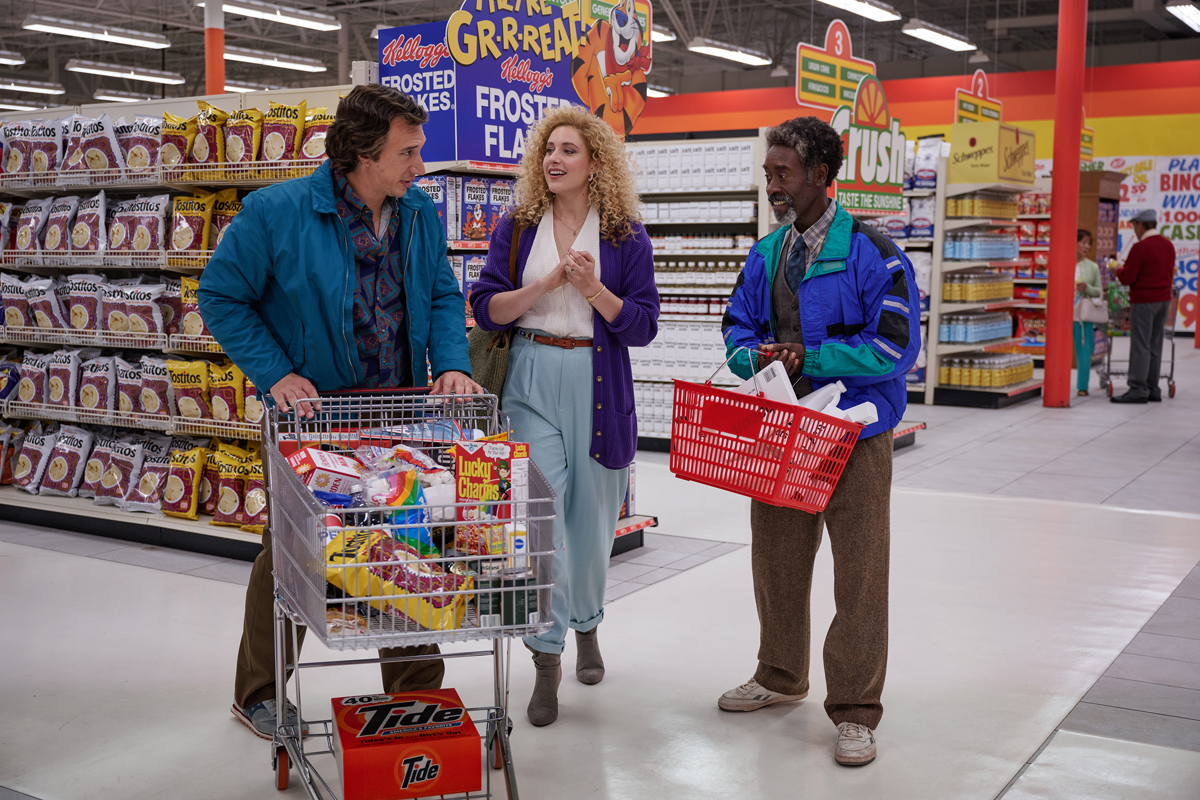 White Noise is sometimes hailed as a literary prepper. It anticipates the synaptic dysfunctions and existential funk caused by today’s information overload. How news—fake news, 24-7 news—oozed through fiber-optic cables and mobile networks. Its “airborne toxic event” may translate, for us, as life during the pandemic—or living through accelerated climate change. But Baumbach’s jumpiness, his props (there’s no other way to describe Babette’s forever-perm of a hairdo), his overreliance on highbrow caper: it’s hard to take their weltschmerz seriously. If anything, this snapshot of the 1980s made me feel nostalgic for an era when professors still sported tweed and no one littered every sentence with the word “like.”

Driver, looking like a paunchy Steve Coogan and declaiming like a recently bereaved black-metal vocalist, makes for an awkward lead. In the film’s best scene, straight out of a ’70s giallo, he writhes in bed, all night sweats and apnea angst, terrified his sleeping sanctum has been penetrated by a mysterious crone. (We’ve all been there.) But it’s hard not to eyeroll when Jack goes doomcore serious: “All plots move deathwards.” And he’s almost campy when, lecture-room tag-teaming with Siskind, he swivels and stretches, huffs and struts, intones about the “living dead among us” while pointing at the students.

Oh death! Baumbach might believe in it, Jack and Babette might whimper about it, but, in the end, White Noise can only giggle nervously in its presence. Far easier to conclude the film with a long—ridiculously long, self-adoringly long—end-credit sequence scored by LCD Soundsystem in which the cast dances among the aisles of a supermarket. They herk and jerk. Contort themselves. Shake maxi packs of toilet rolls and fling plastic bags in the air. If Devo had made a video like this forty-five years ago, it might have seemed on point. Then again, even they might have thought—Supermarkets? Death by Doritos?