Theater
A Room in India

The Mahabharata meets Shakespeare and the Taliban in an extravaganza by Théâtre du Soleil. 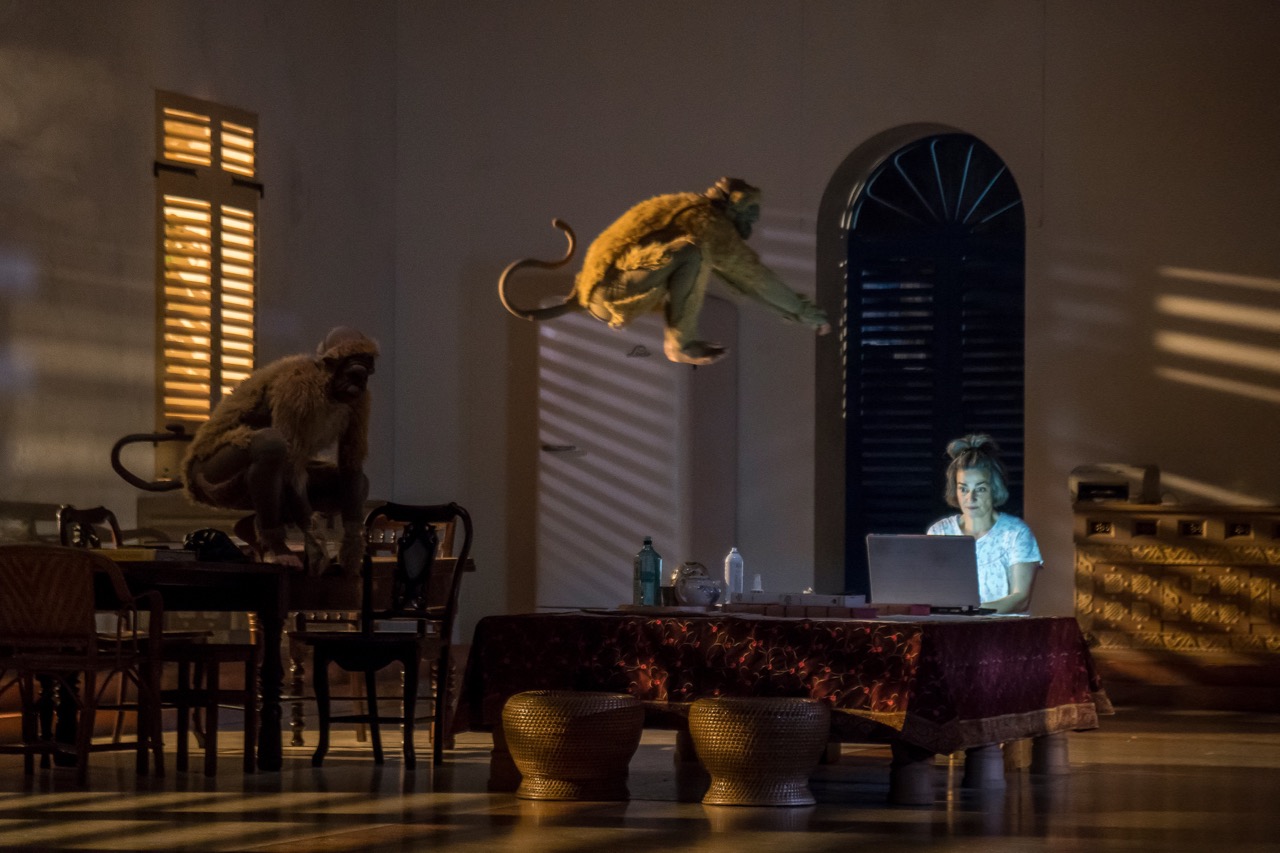 In 1964, Ariane Mnouchkine and her theatrical compatriots formed the theater collective Théâtre du Soleil; six years later, they took over an abandoned munitions factory outside Paris. They performed without heat, without water, without permission. But in the decades since, Théâtre du Soleil has become famous, and Mnouchkine towers over the scene as one of the last theater Olympians. Their pieces contain the uncontainable: their collectively devised works—the diverse ensemble is around forty strong—have described an entire life (Molière), an entire year (1789), and the entire refugee crisis (Le Dernier Caravansérail). And the Soleil lens is still zooming out, out, out. The last Mnouchkine show to come to New York ran over six hours and tackled “human ephemerality.”

Yet even knowing that, even having seen Les Éphémères and others, A Room in India at the Park Avenue Armory seems like a cabinet flung wide. Countless elements are jumbled together in a sometimes-glorious, sometimes-infuriating choreography: a director’s-nightmare scenario about a Mnouchkine figure thrust into leadership of a theater company; an Indian troupe performing excerpts from the Mahabharata; magical visitations by acrobatic “monkeys”; dream scenes with Chekhov and Shakespeare; the real YouTube video of a bloodied Syrian child; and a Punch ’n Judy blow-’em-up gag starring seven Taliban stumblebums.

Said another way, the show is a portrait of a badly shaken mind. Created “in harmony” with the critic-playwright Hélène Cixous, A Room in India was built in the wake of the November 2015 Paris attacks. In early 2016, the entire company went to Pondicherry in southern India, gathering collaborators and learning to perform a type of street opera called Terukkuttu, which features improvisation and call-and-response singing. But even a continent away, the rage and helplessness of that November stayed with them. A Room in India includes all the anti-ISIS loathing, confused what-aboutism, and self-examination of terrorized citizens in crisis. It’s also a comedy. 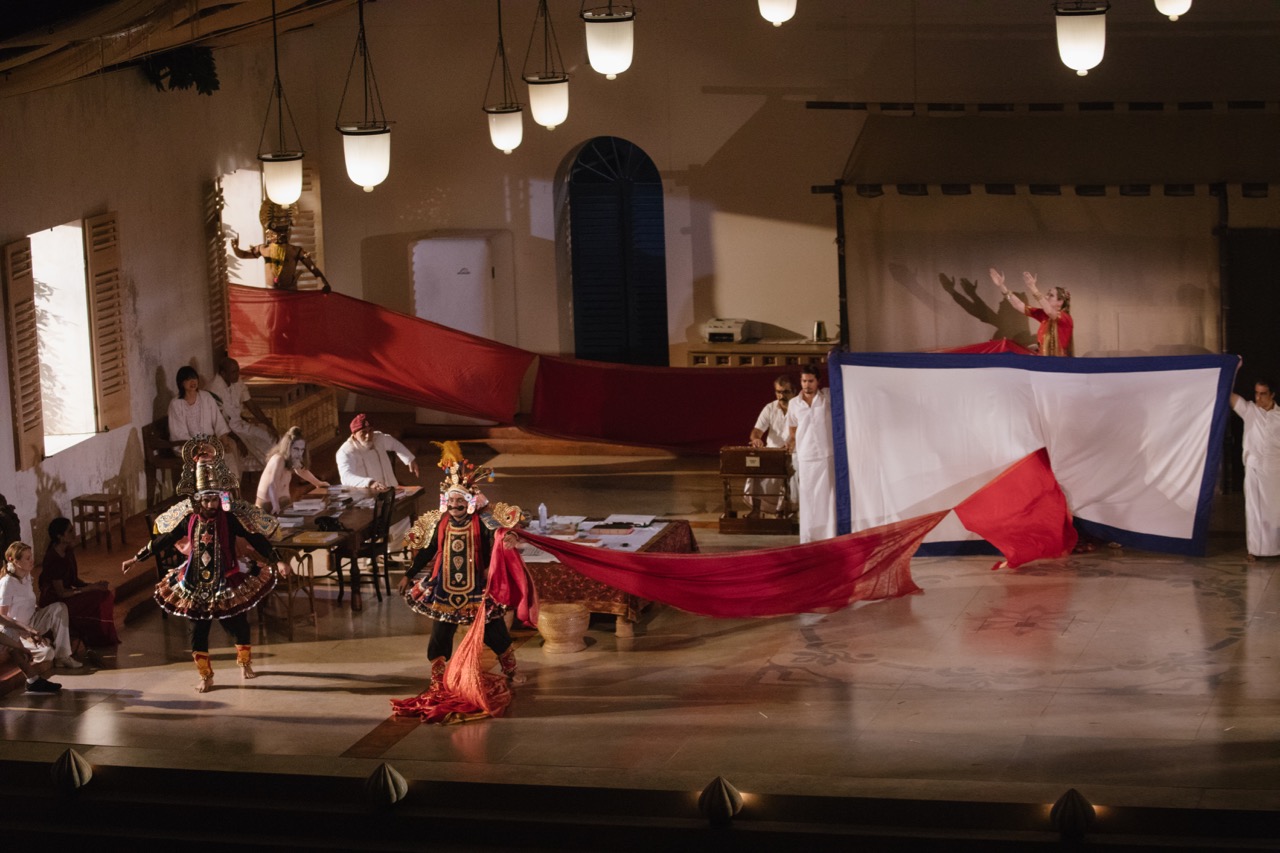 Omid Rawendah, Seear Kohi, and Judit Jancso in A Room in India.

The play is a fantastical version of the company’s Pondicherry trip. The unifying image is the chambre itself: the set is a huge guesthouse bedroom, lined with wooden shutters, with a little cloth cabin at the back. (This is usually the room’s bathroom, but, at various points, it also disgorges nine musicians, a rickshaw, and a puppet cow.) Cornélia—a hapless assistant at a Soleil-like troupe—is asleep, but she’s rudely awakened by the telephone and a sudden promotion. Their director, she learns, has gone spectacularly mad and left her in charge. Though Cornélia (Hélène Cinque) has never “done anything creative,” she has to come up with something, anything to perform. She starts to dream. The phone wakes her. She dreams again. 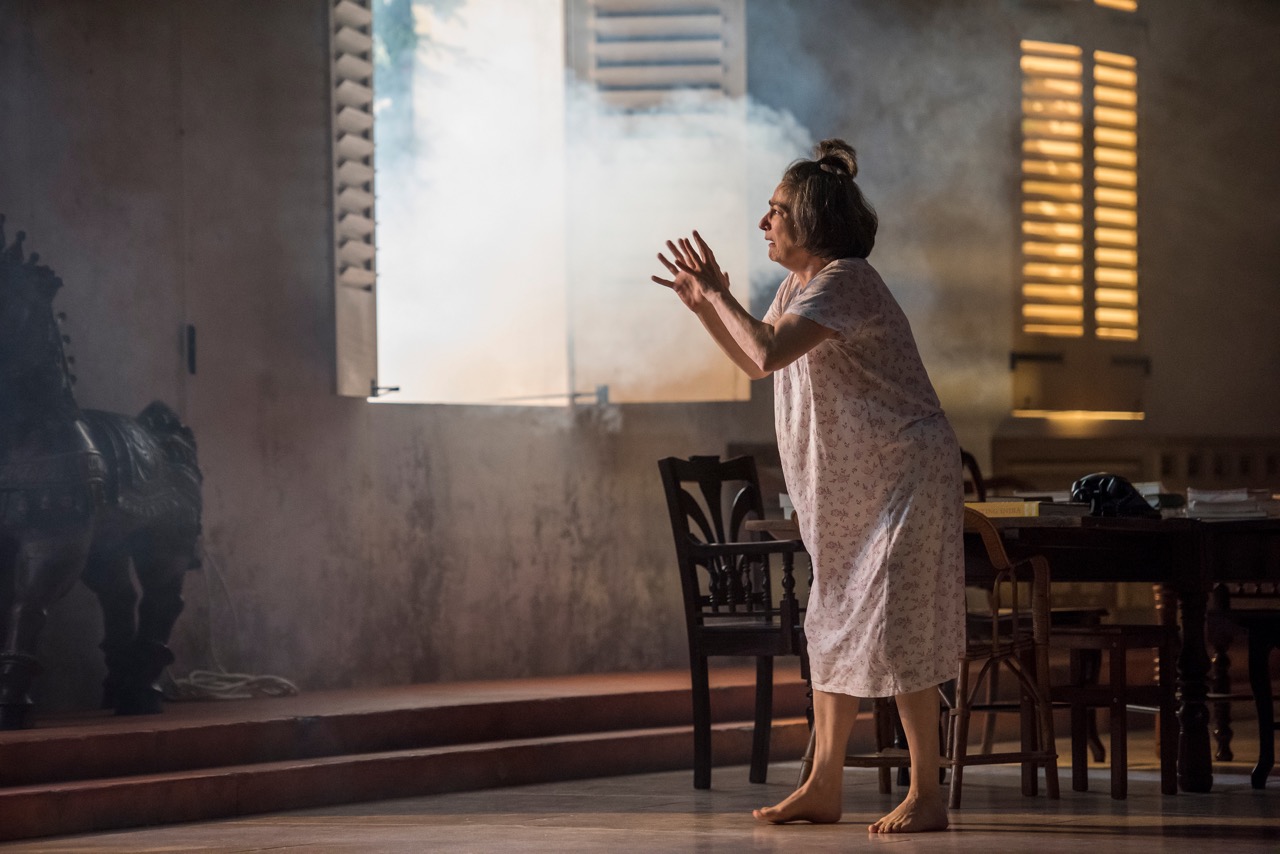 Hélène Cinque in A Room in India. Photo: Stephanie Berger.

In her dreamscape, actors tumble in through the windows, and she fires at them with a machine gun. Suicide-vest-wearing baddies proliferate, and the room sometimes fills with smoke or a storm of newspapers. And whenever she says she hasn’t got any ideas, the fantasy cracks open and the Terukkuttu performers arrive—either the whole company rushing in for a production number, or one by one. (A king, his gold-and-red headdress as tall as a wedding cake, stamps his foot, then disappears into a billow of fog.) When she’s awake, realistic drama intrudes as well: the wonderful Nirupama Nityanandan plays Madam Murti, the troupe’s host, who’s trying to protect her housemaid from being sold into sexual bondage. In one moment, her exasperation at the company’s many mistakes cuts through the miasma of artistic paralysis: “You want to look at women in the Mahabharata? Why not talk to the women in India?”

At the two-hour mark, and then somehow still at the three-hour mark, the piece manages to hang together despite its wild swerves. This, you think, is what it’s like to live in the world now—to try to lose yourself in work only to be jolted back by a news alert. But then, as the show begins to iris to a close, we realize that A Room in India’s own wisdom may be rather shallow. The show stops reflecting anxiety and begins to create it: Mnouchkine starts to lean toward cliché—there’s a climactic group hug, for example—and the work takes a bad turn from self-examination (Madam Murti’s tart questions) toward self-regard (it starts to applaud its own choices).

Agustin Letelier in A Room in India.

The piece constantly interrogates its own reasons for being—one of Cornélia’s tortures comes as a questionnaire from a cultural ministry that takes an icily anti-culture bent. Asking “Is theater worth it?” is rather disingenuous, considering the massive production we’re watching. But it’s the unquestioned elements in Room’s performance that really chafe. Characters keep claiming that violence in the Middle East can’t be understood—perhaps, an actor says, there are simply “demoniac energies” there? That’s a frightening intellectual abdication. And my blood ran cold in the first minutes of the show when the gifted French clown (Agustin Letelier), his face painted dark, did a pratfall over his mop while playing a clumsy Indian servant. American and French traditions of brownface aren’t the same, and taking offense is usually the laziest thing you can take from a show. But I’ve been arguing about the play ever since, most loudly with myself.

Because while A Room in India disappointed me, it’s also unmissable. Inside the nearly four-hour play are more than two hours of the greatest performances that you’ll ever see. Mnouchkine has had fifty years to perfect her comic touch, and she builds poor Cornélia into a broad commedia character out of accumulating realistic details. And Room’s most marvelous passages are the Mahabharata sequences, which alone are worth the (hefty) price of admission. The Théâtre du Soleil actors do their teachers from Tamil Nadu incredibly proud—Seear Kohi as an ancient king and Omid Rawendah as his dastardly brother are charismatic, hilarious, glorious, revelatory. 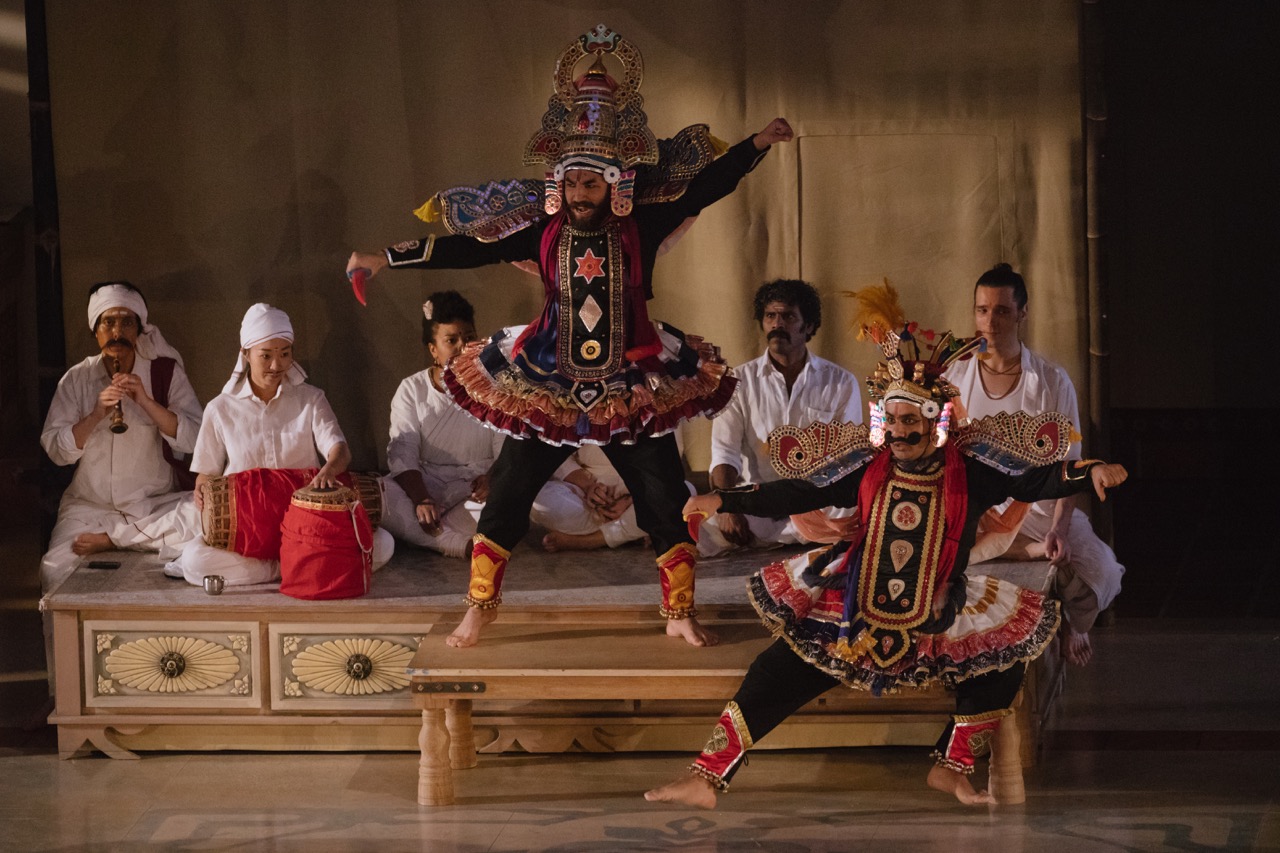 So with such masters onstage, what is Shakespeare (Maurice Durozier) doing there? He comes in to tell Cornélia—who is basically a clown version of Mnouchkine—that she must “make fun of your villains.” Ah! So that’s the reason for the racist comedy-Muslims who keep turning up! The Taliban fighters who can’t get their cell-phone bomb to work; the goofy Saudis titillated by women driving; the bouffon-ayatollah with the Charlie Chaplin mustache. Before Shakespeare arrives, these scenes seem to be part of Cornélia’s repertory of bad ideas; after Shakespeare, we realize the play means them as an actual, useful response to terrorism. Oh dear. To bracket my exasperation at these scenes required a kind of internal “setting aside” so that it wouldn’t swamp my rapture elsewhere. I don’t believe in purity tests for works of art, yet there I was, furious with myself, unable to stop applying them.

The show is two things, and god knows, keeping two things in your mind simultaneously these days is very difficult. It is both a piece full of political wooliness, offense, and wrong-thinking, and a cargo of gorgeous, right-minded intercultural celebration. These two selves are so different from each other, they aren’t even reverse sides of a coin. Rather, this Room is big enough to contain a multitude of two: a bad piece of theater and a transcendent one.