Theater
Curse of the Starving Class

It’s property, patrimony, and artichokes in a Sam Shepard revival. 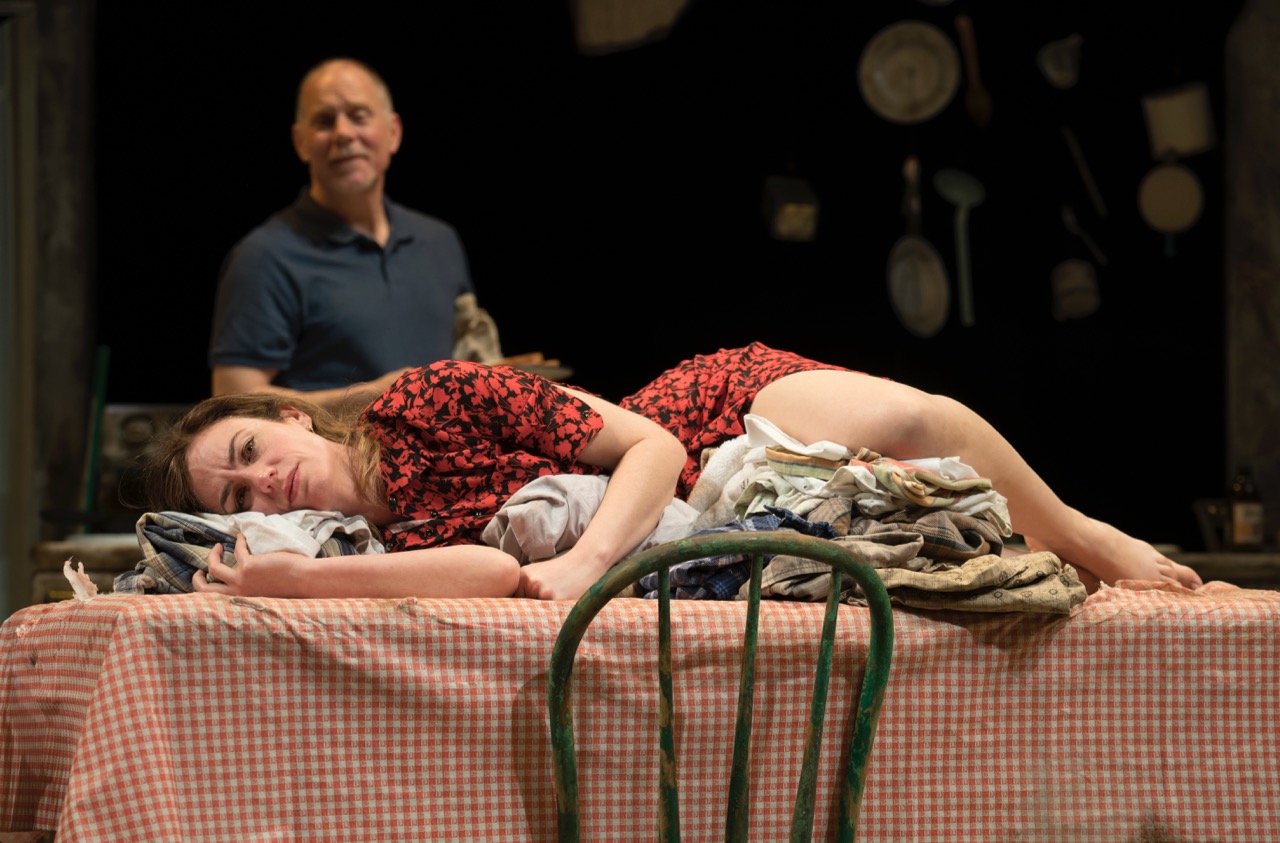 David Warshofsky as Weston and Maggie Siff as Ella in Curse of the Starving Class. Photo: Joan Marcus.

Sam Shepard wasn’t in the mood for surprises when he named his play Curse of the Starving Class. The air of inch-thick gloom is right there in the title; the equation’s all mapped out. It’s an odd little phrase: class hints at solidarity and revolution, while curse is pure doomstruck fatalism. Yet that combination is 1977 Shepard in a nutshell. The days of his incantatory freak-out plays were fading behind him; he was then writing the comparatively realistic family cycle (Buried Child, True West, Lie of the Mind) that would turn him into a theatrical juggernaut. He was making a conscious attempt to talk about America and relationships and the land. The people looked like human beings instead of space aliens or rock ’n’ roll gods. The people in the plays looked like him. 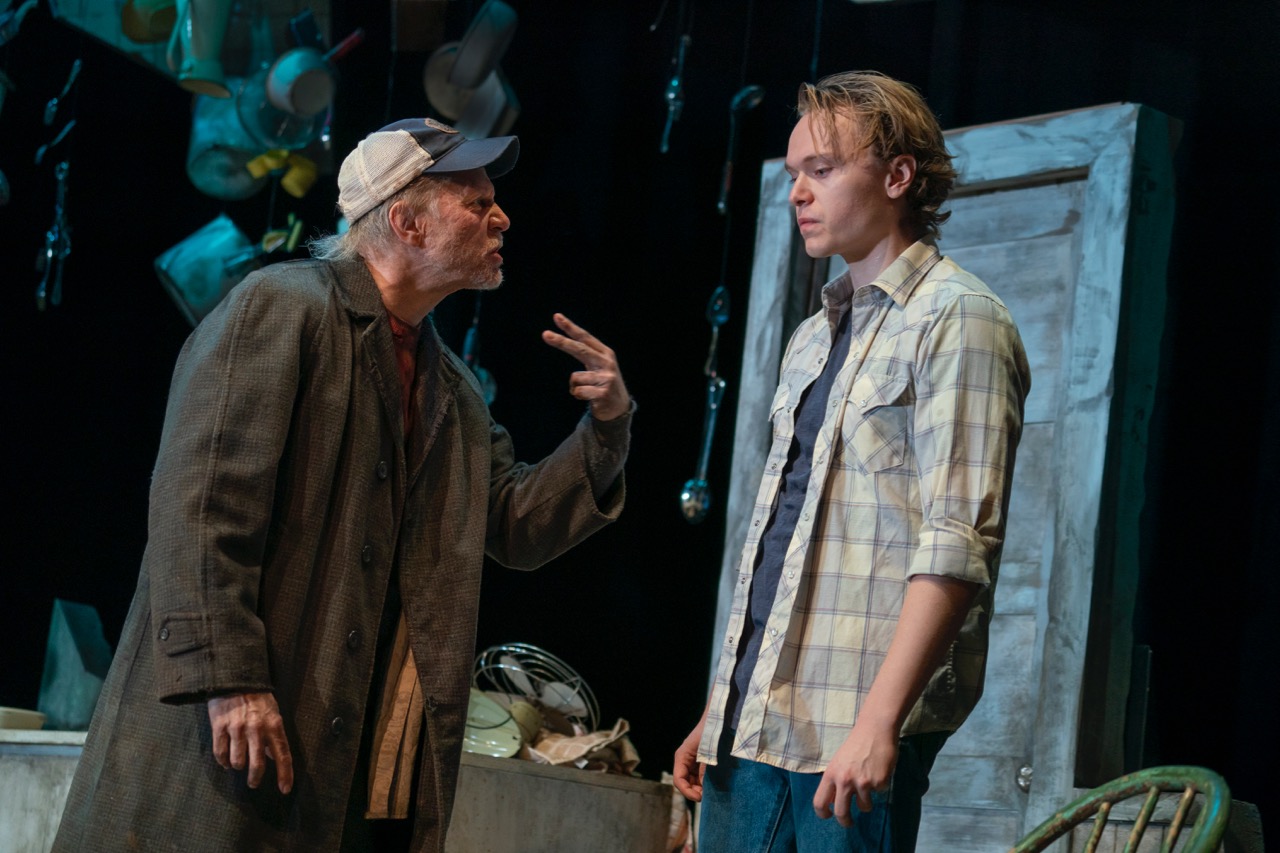 David Warshofsky as Weston and Gilles Geary as Wesley in Curse of the Starving Class. Photo: Joan Marcus.

Over the course of Curse’s two and a half hours, a family tears itself apart. Poverty takes its toll, but humans are doing the real ripping and gouging here: an unpredictable, alcoholic father, Weston (David Warshofsky), has so terrorized his son Wesley (Gilles Geary) and wife Ella (Maggie Siff) that they sidle around him like spooked cattle. Ella, fed up, plans to sell the homestead out from under the whole clan—she’s taking meetings with a rapacious developer-lawyer (Andrew Rothenberg) and dreaming of Europe. Pubescent daughter Emma (Lizzy DeClement) still seems connected to the outside world: she’s preparing a 4-H presentation, and she refers to classmates and swimming pools and a future as a mechanic. But lanky Wesley is lost in reverie. Externally, he’s trying to fix up the place—he hammers together a door to replace the one his father breaks down; he brings a real, live lamb into the kitchen to see if he can cure its maggots. Mostly, though, he’s listening to the sounds of male destruction. As the house settles and his parents fight, “I listened like an animal,” Wesley says. “My listening was afraid.”

Terry Kinney’s production at the Signature Theatre starts with a bang. Just as the play begins, Julian Crouch’s kitchen-set disintegrates. Ropes pull the structure upward and outward with a huge wrenching sound, and the filthy walls break off at the root. Cabinets tumble open, spilling clattering mobiles of pots and pans and ugly dishes. For the rest of the play, the kitchen hovers there, mid-explosion or mid-collapse. It’s a bravura moment that prepares the audience for opera. 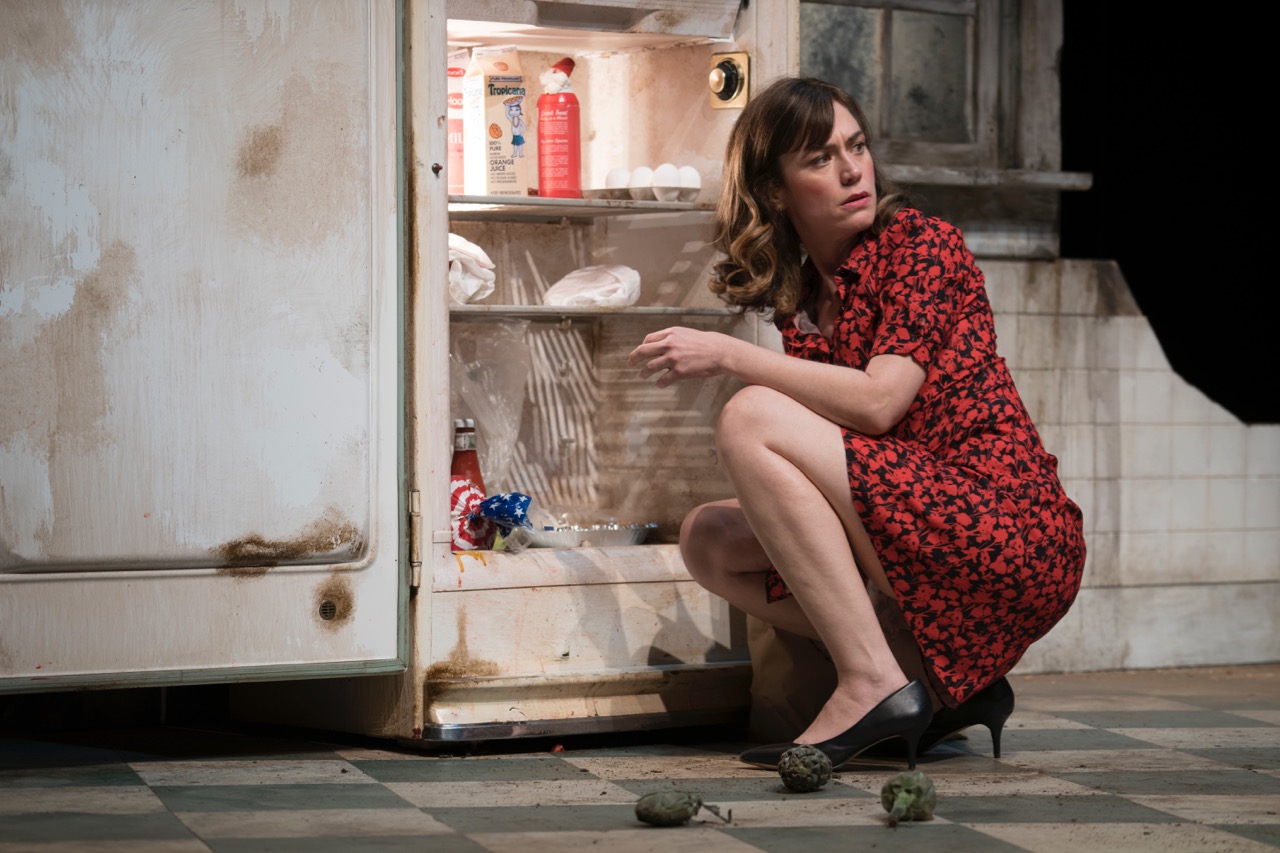 Maggie Siff as Ella in Curse of the Starving Class. Photo: Joan Marcus.

It’s beautiful, but the choice simultaneously overamplifies and undercuts the play. Curse doesn’t require a grand set. Its energy comes from the way that Wagnerian passions have been crammed into a normal, kind of crummy house. The Götterdämmerung of Weston and Ella is often hilarious. They’re crafty in their competing plans to sell the property; they’re both annoyed at the empty fridge, which Weston eventually fills with an unappetizing pile of artichokes. Little Emma shouts most of her lines because she FEELS EVERYTHING SO MUCH, and Wesley urinates all over her 4-H presentation posters, smack dab in the middle of the kitchen. (“I tried to stop him,” deadpans her mother, barely looking up from her breakfast.) And so Crouch’s installation is too self-serious; it fights with the lifelike absurdities around it, and this, in turn, creates absurdities of its own. The walls hang in the air, oozing portentousness while the lamb licks at the mesh of its onstage cage, blowing little lamb kisses. Smek smek smek goes the lambkins, and the audience coos, all while Natasha Katz’s dramatic lighting tries to make it seem like the end of days. 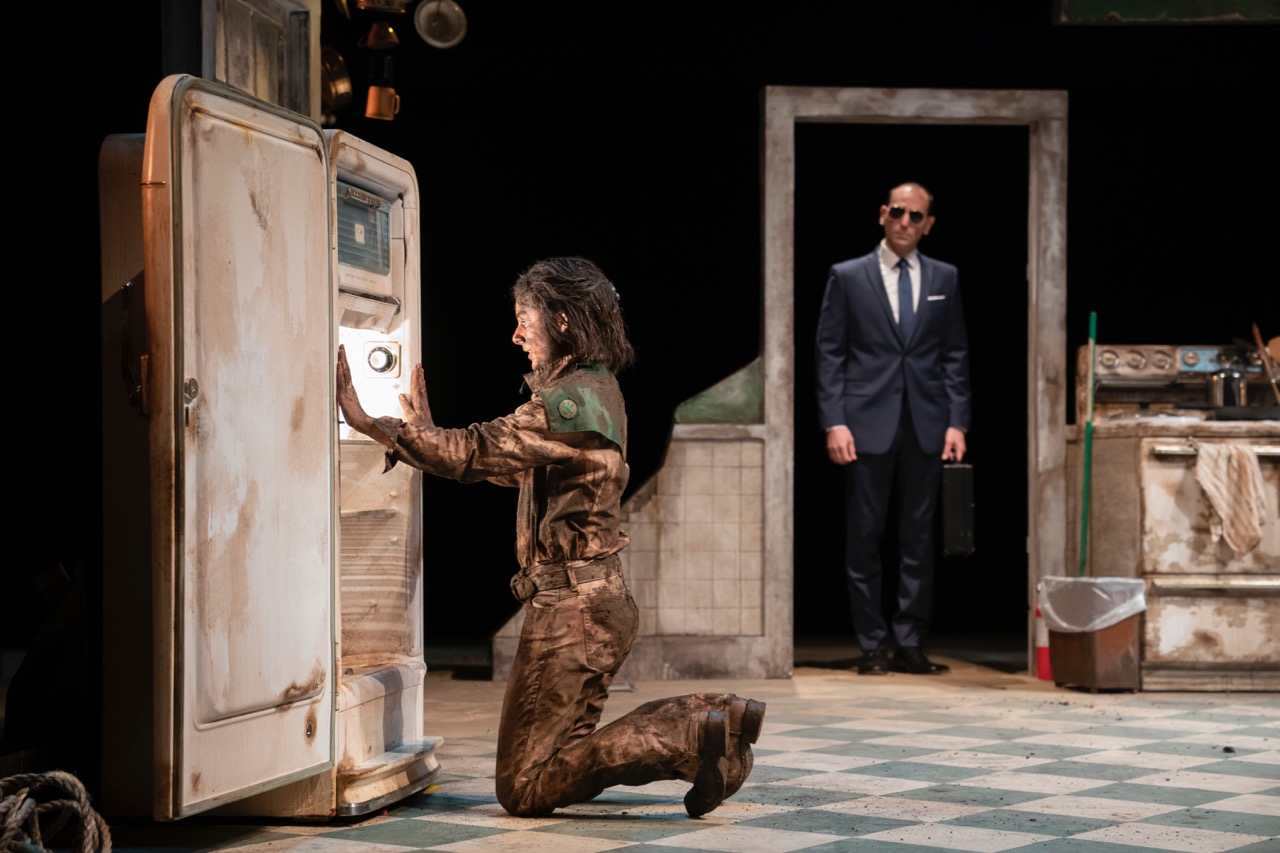 Lizzy DeClement as Emma in Curse of the Starving Class. Photo: Joan Marcus.

Despite the frequent lusciousness of his text, Shepard did not make things easy. The lamb is his fault. How can an actor pull attention from something with such sweet wobbly knees? The way each symbol and theme in the play is stated and restated is Shepard’s responsibility too, not to mention that forty years on, we can see that Shepard’s women often seem like grafts on a family rather than its roots: somehow, mothers and daughters never feel the deep pull of family and the land under their feet the way that men do. This means Siff has a great first entrance and then a series of diminishing returns—the moment Warshofsky’s Weston storms the stage, we sense the play slew around to stare at him. (In an unsteadily cast production, Warshofsky is the stunner. He has the same trick his character does—he drinks energy from everyone else.)

And ambling around inside the play—sometimes naked, sometimes in his father’s old clothes—is Wesley, Shepard’s own self-portrait. The playwright’s cowboy image has always been the background music to his plays. We know his shy swagger, his Clint Eastwood squint, his Gary Cooper widow’s peak. When the writer was alive, the task of playing an icon was already nerve-racking. Now with Shepard gone, ascended into theatrical sainthood, Geary seems nervous and even a little paralyzed. Are we measuring Geary against Shepard? Is Geary measuring himself? Whatever’s happening, there’s constraint at the production’s heart. 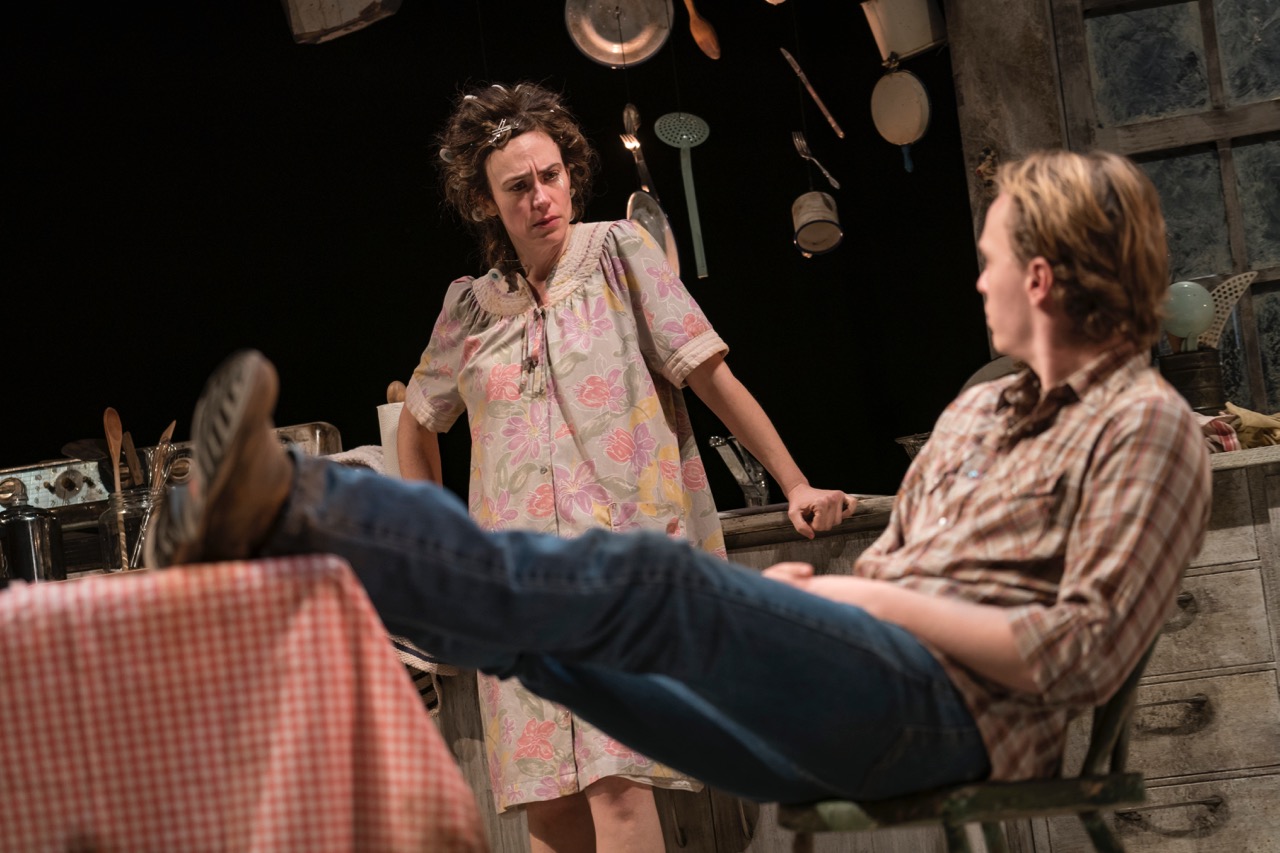 Maggie Siff as Ella and Gilles Geary as Wesley in Curse of the Starving Class. Photo: Joan Marcus.

Shepard was drawn again and again into his own biography, preoccupied with notions of hereditary stain. In Buried Child, for instance, a son looks at his reflection and sees the faces of his father and grandfather and generations before them, shadowed under the skin. Curse makes it difficult to ignore the playwright’s own past—Shepard’s alcoholic father raised him on a beat-to-crap avocado farm with rusty irrigation pipes that seems a lot like the setting for Curse.

But now Shepard has himself become the father figure that we can’t look away from. The more Shepard tore down myths, the more he became one. The more he derided Hollywood’s hollow idea of the West, the more he added to it; the more he tried to mock his aura of authenticity (by breaking his self-portrait into warring brothers, say), the more he accidentally established himself as the One True Cowboy of the American Stage. He wanted to kick holes in the rusted-out ideas of masculinity that had messed with his head all his life, but we fell in love with the rangy, badly shaven, hard-drinking romance of it, which we confused with him, which we confused with his plays.

Though this production isn’t wonderful, it still has some bite: Warshofsky’s superb, and Kinney has a few comic staging ideas about exaggerated physicality that resists his own set’s overweening menace. It’s just that the family never seems like a family. Still, the show makes you miss Shepard with a sharp, shocking ache. He died only two years ago, and his ghost is still knocking around the Signature. Curse is not his best play, nor is this the best possible production of it. But it’s a welcome chance to sit and listen to Shepard’s familiar sermon about the way our fathers’ poison never quite leaves the blood. Those old guys get in under our skin and won’t go away, he says. He should know: he’s one of the addictive liquors running through our veins.