Controversial playwright Jeremy O. Harris offers another round of excess. 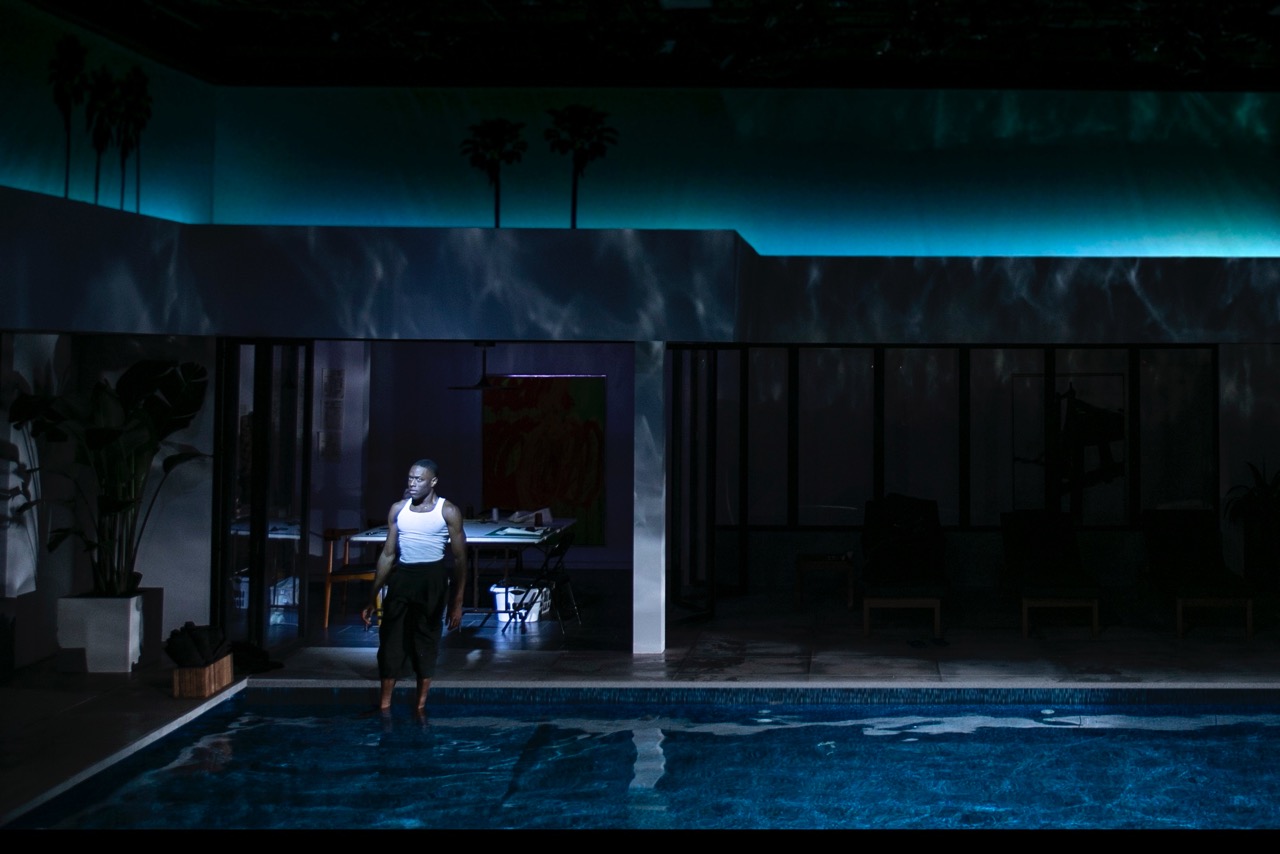 It doesn’t happen often at the theater, but right now on Forty-Second Street, there’s a designated splash zone. The audience of the New Group/Vineyard Theatre’s production of Jeremy O. Harris’s “Daddy” sits against the lip of the onstage infinity pool, so whenever a character dives in—to do laps, romp in the nude, or be baptized—the first rows get wet. It’s a little vulgar; it’s a little fun; it primes an appetite for a deep dive it won’t ever satisfy. In its essence, the splash zone is very “Daddy.” 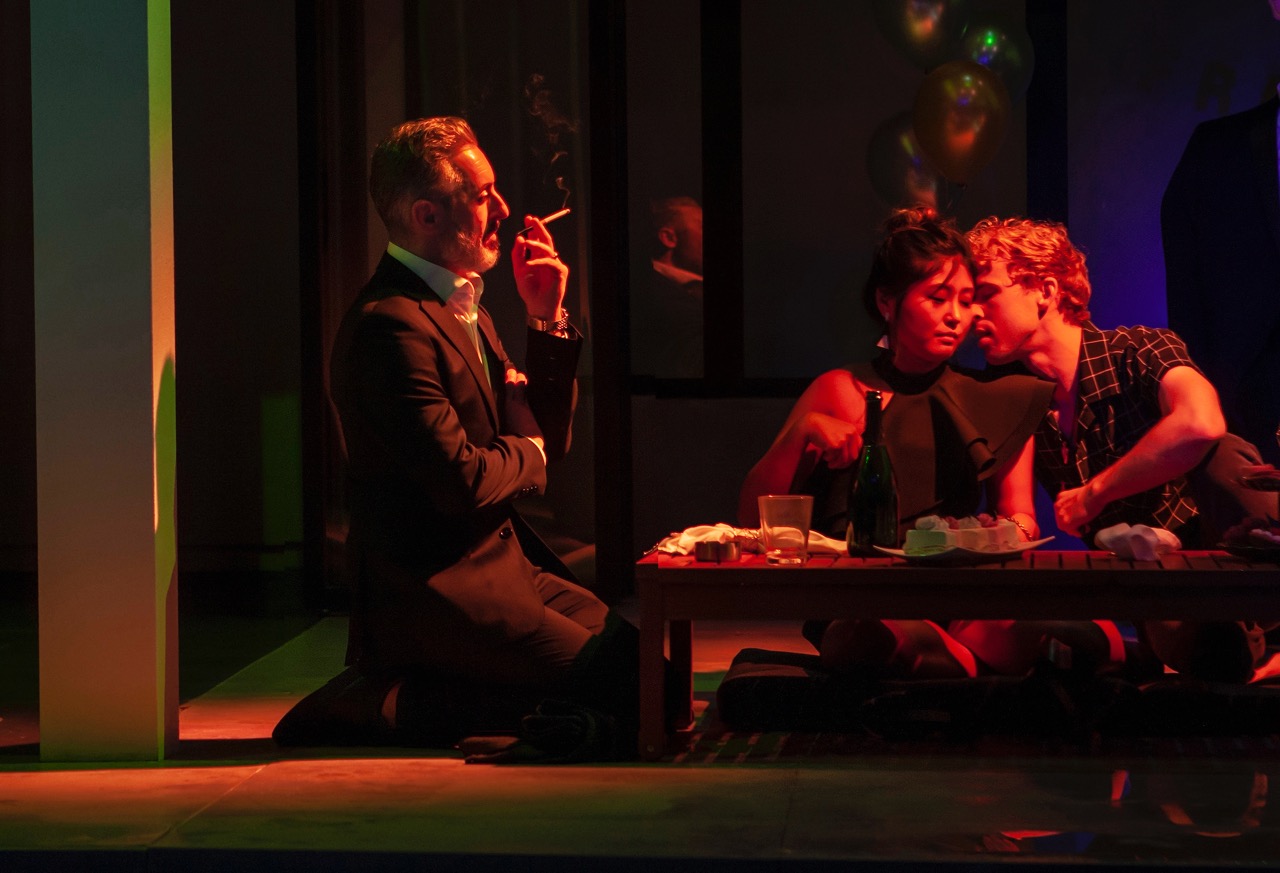 Andre is “Daddy” thrice over. Once the two fall in lust, he provides the money, shelter, and Gucci sunglasses on which Franklin will soon totally depend. Franklin calls him “Daddy” during sex. And when the whole thing turns into a surreal nightmare after the second intermission, a possessed Andre channels a memory of Franklin’s absent father, hinging open his jaw like a snake and screaming abuse.

But the real papa here is the writer. Harris is in the kind of career flush we have to borrow French phrases to adequately describe: he’s an enfant terrible (not yet graduated from Yale School of Drama, yet already an outspoken superstar in Vogue spreads and culture-page profiles); he’s a succès de scandale (his provocative 2018 Slave Play prompted a furious petition to stop the production). He’s a soi-disant melodramatist—the subtitle of “Daddy” is A Melodrama—interested in shock and pop and a revival of the French tragedy-of-manners. (As part influencer, part intellectual, Harris is a cross between Boots Riley and Harmony Korine, with some Amiri Baraka thrown in.) And right now, he’s developing a line as a theatrical sadist. In Slave Play he posits antebellum role play as sex therapy for interracial couples, while in “Daddy” Harris experiments with a tincture of young black man and voracious white institutions, looking for the mixture that will most titillate, damage, and instruct.

As the central couple in “Daddy” spends months in and out of their clothes by Andre’s glittering pool, their May-December relationship is always under some kind of surveillance. Franklin’s friend Bellamy (Kahyun Kim), pal Max (Tommy Dorfman), and gallerist Alessia (Transparent star Hari Nef) kibitz at the water’s edge while enjoying Andre’s largess, and soon Zora, Franklin’s disapproving mother (Charlayne Woodard), crashes center-pool like a comet. Andre and Franklin don’t really want Zora around, particularly when she thumps her Bible, but she stays on, sizzling with the Spirit. 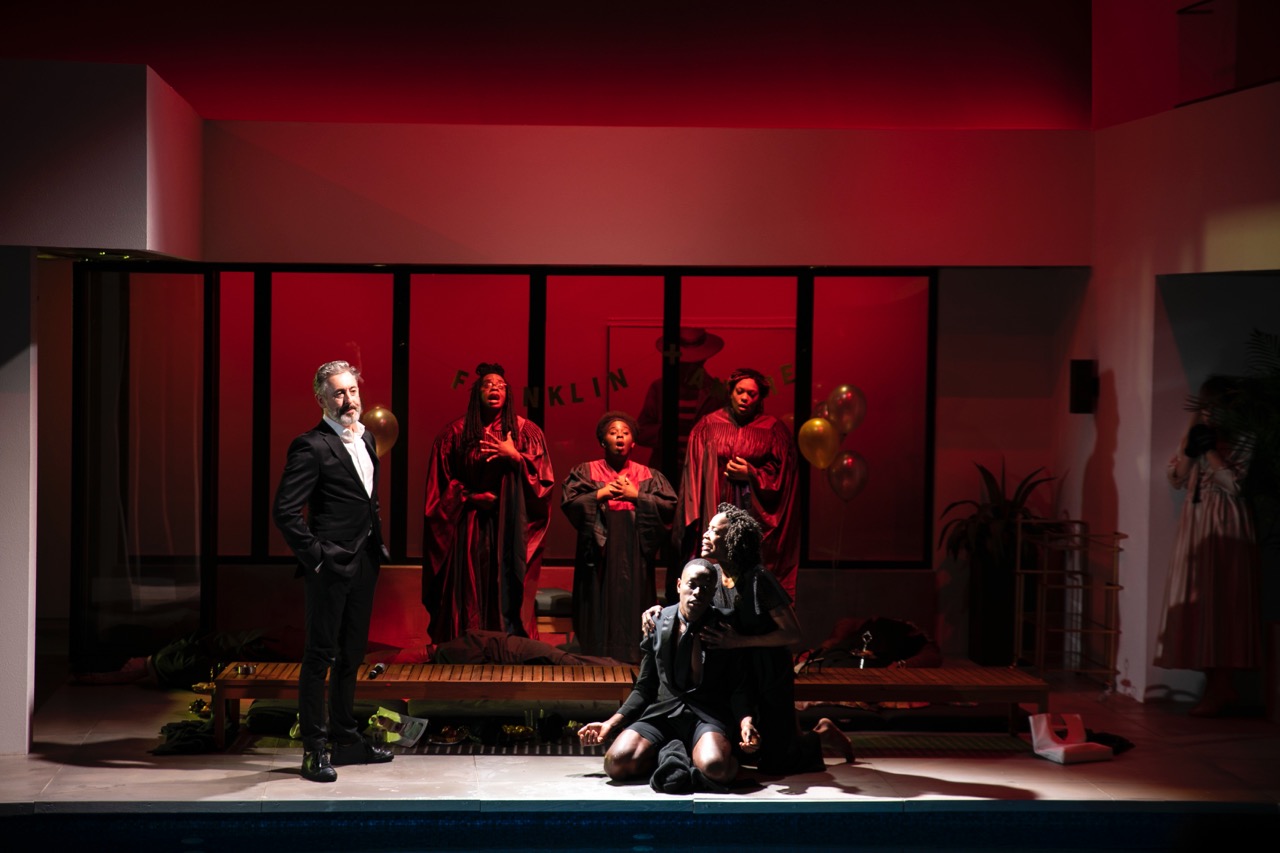 Excess is Harris’s watchword, so there’s also a mysterious three-woman “gospel choir” echoing Franklin’s increasingly disoriented thoughts, and eventually—as Franklin develops his art—massive, eerie dolls that lean drunkenly against the deckchairs. “We can be outlandish and brazen,” Alessia cries, trying to describe how Franklin is breaking white supremacy by selling his voudon-inspired art at a high price, “and unsafe and careless and all those other things the big boys have been able to be forever. Literally. It’s so pop. It’s so Gaga.” 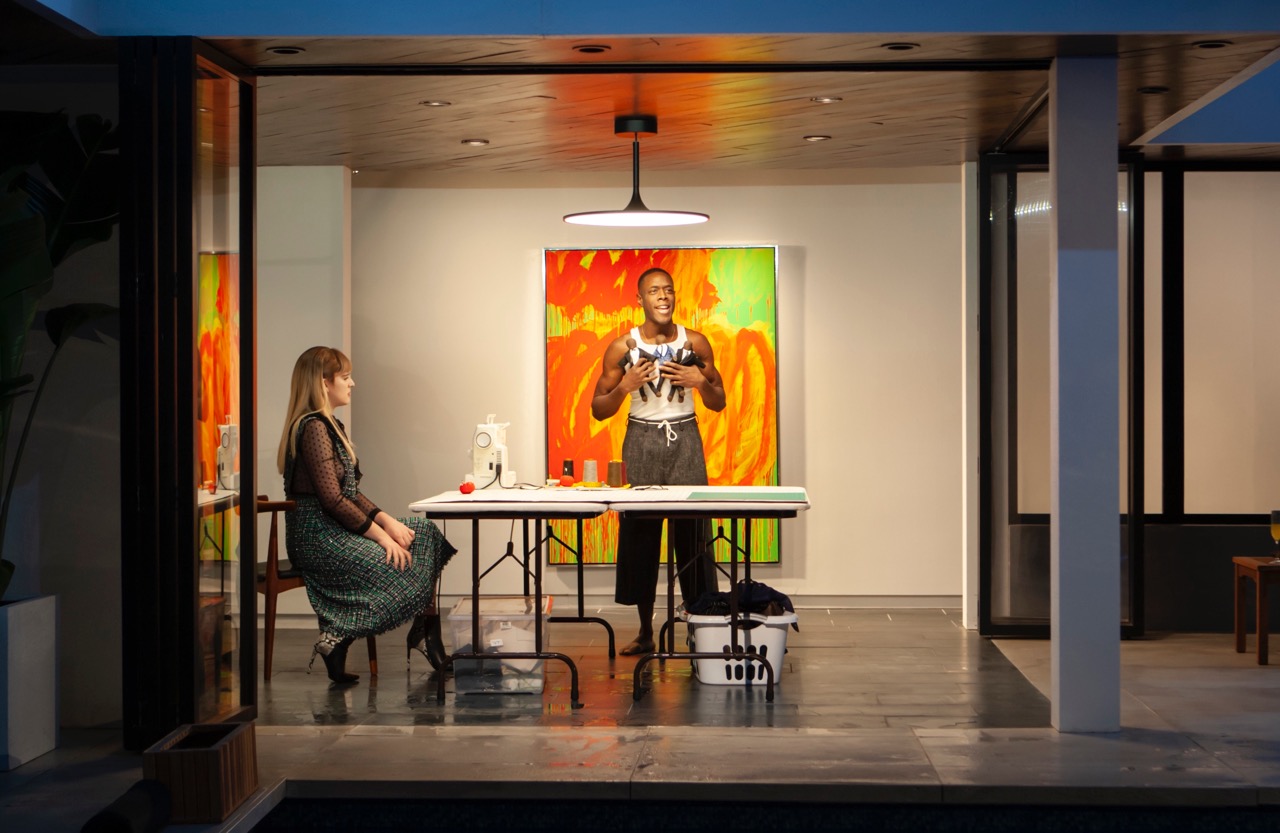 Clearly there are swipes at the puerility of the art world here, which are fresher than Harris’s digs at brand-obsessed millennial materialism (Bellamy is a particularly lazy portrait of an Instagram-stunned idiot). In the first act, the graphic sensuality between Andre and Franklin is nice to see, while Woodard delivers insults with a mighty hammer. But “Daddy” loses power when it starts to accelerate into its more sensational scenes—the lurid excitement (an important part of melodrama) turns risible.

As Zora tries to reclaim her son from his hell of white-worldly temptation, his sanity frays. The Daddy games intensify, and Franklin regresses pathologically, sucking his thumb for the show’s last forty-five minutes. Pinned by a dozen human and inhuman gazes, he has panic attacks about feeling owned, about selling his art, about commodifying his blackness, about bottoming. Director Danya Taymor stages these episodes almost as mini-music videos—we learn that even a total dissociative episode can look good with pink lighting.

In order for “Daddy” to be a melodrama (as the subtitle advertises), hectic extremes of behavior must play out on a moral landscape in extremis—we should see wickedness, virtue, peril, victory. But what is considered good and evil here? What exactly is the danger? Couldn’t Franklin just leave? Strangely (and I think sloppily), the text uses the men’s sexual relationship as a site of that danger. Certainly, whenever gray-bearded Andre strokes Franklin and calls him “son,” the show intends to shock. But this makes the play—despite its queer bona fides—seem a bit . . . square. At multiple points, Harris and Taymor incorporate George Michael’s 1987 “Father Figure” for its delicious, orgasmic ’80s effect. But the song also emphasizes the fully thirty years that daddy fetish has been in the mainstream. It’s like Reefer Madness for basic kink. 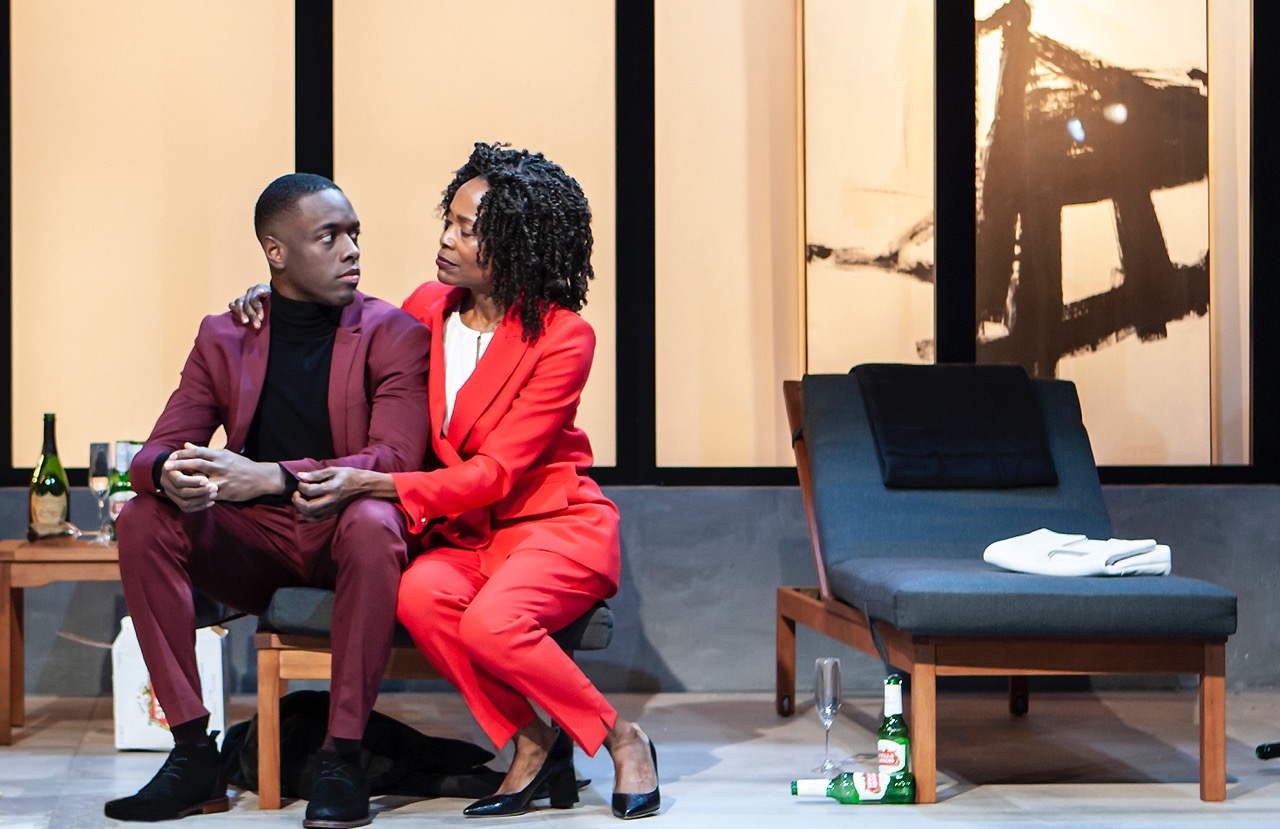 Melodrama also needs a villain: in “Daddy,” the job swings mushily between possessive Andre (representing whiteness’s need to “collect” those who criticize it) and obsessive Zora (representing the hell-on-earth of high expectations), with the other “friends” flickering in the grass, snakes on standby. Franklin, at least, is incontrovertibly the damsel-in-distress. He is young, yes, and fragile, and despite his condescension to the others, he maintains a kind of innocence. In Harris’s cleverest dramaturgical gesture, the old shorthand for innocence is changed: the melodramatic heroine’s blushing whiteness becomes Franklin’s shining blackness. It summons the monsters, just by existing.

As an interplay of archetypes, “Daddy” shows thrilling potential. But at the level of dialogue, it can turn sour and baggy. Harris has each character describe Franklin’s brilliance; his friends describe him as a talent and a speaker nonpareil. The play rests on the notion that his acuity, both artistic and critical, is part of his beauty. But here’s an example of Franklin describing his lover:

That is the sound of a play mistaking doggerel for poetry. “Daddy” is concerned with worth and real value, so it’s crucial that when characters tell Franklin what a genius he is that he not then sound high on weed and half a page of Fred Moten. 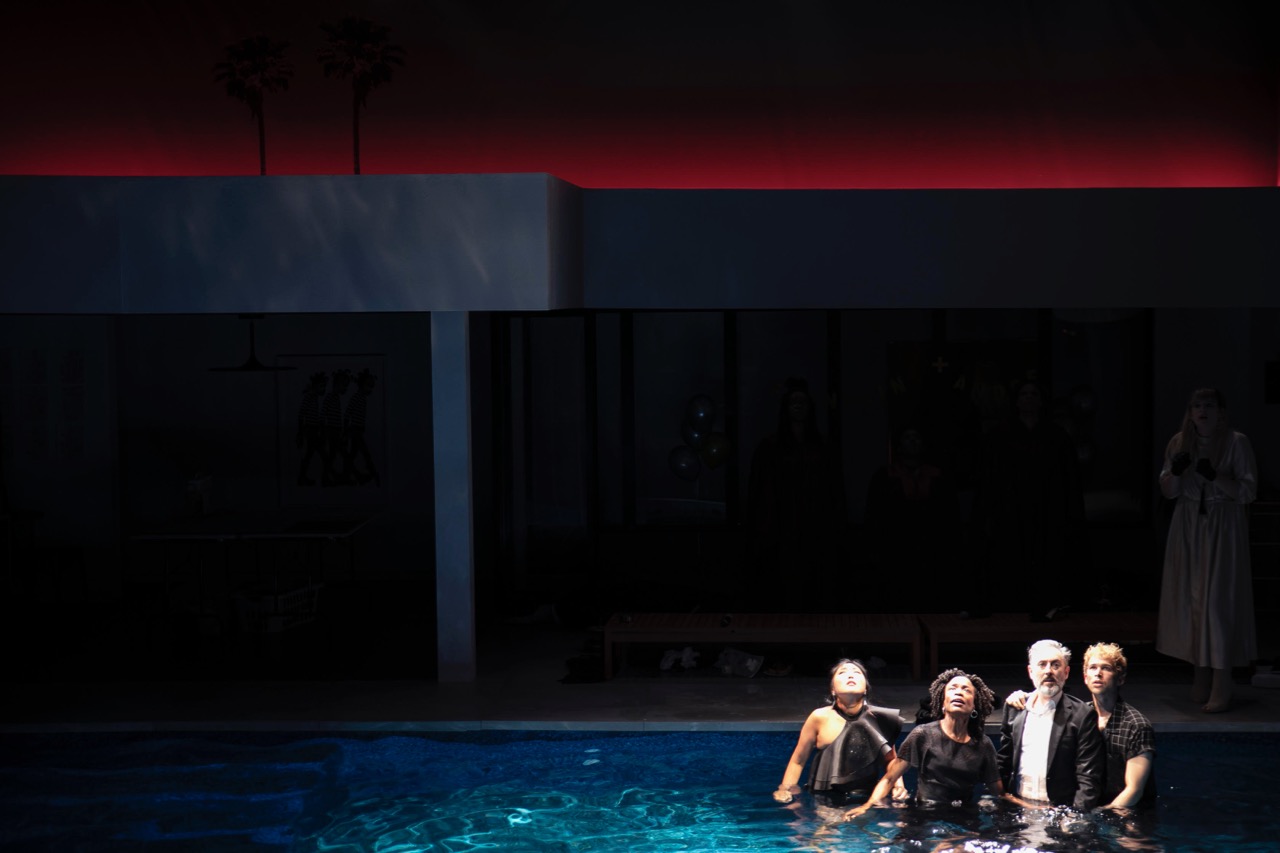 It’s notable, I think, that we see two art projects by Franklin: in the first act, foot-long dolls, then, for his second gallery show, ten-foot-tall versions. The only idea Franklin has is—go bigger. This same directive drives the play to its nearly three-hour length and encourages windy monologues of diminishing quality. When the piece is still small and we’re watching lovers erode each other’s values with a touch, it can make you shudder. But despite Harris’s intentions, escalation doesn’t actually increase its effects. Everybody keeps jumping harder and harder, but somehow nothing makes a bigger splash.