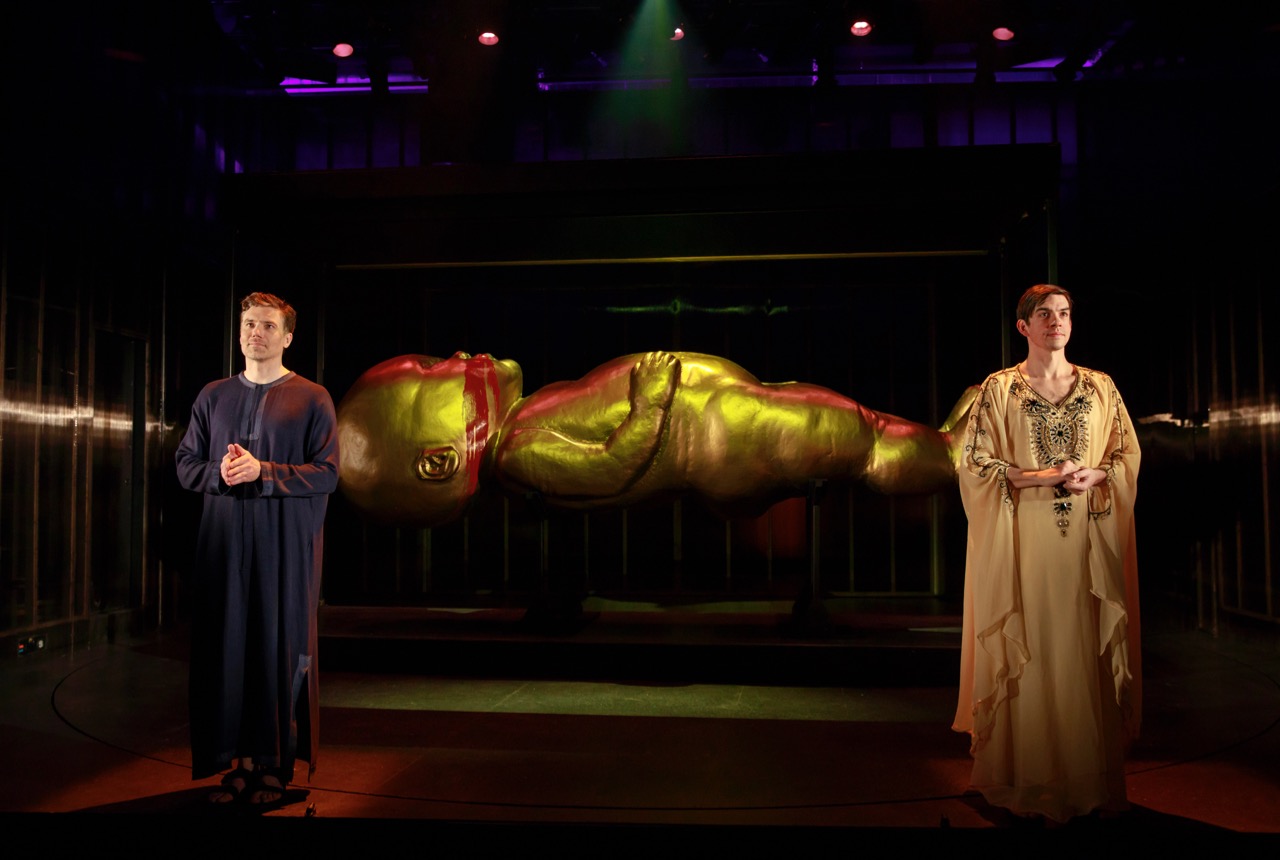 What if women just weren’t . . . here anymore? Let’s say men figured out how to have the babies. Our biological usefulness over, we ladies would probably conga off the great line of evolution—evanescing without violence or femicide.

This is the premise of Robert O’Hara’s confused satire Mankind now at Playwrights Horizons, a tongue-in-cheek projection about the world that comes after women. O’Hara has written two of the sharpest comedies we’ve seen in the last several years (Bootycandy and Barbecue), won two Obie Awards, and generally established himself as one of theater’s acid wits. Here, though, the vitriol turns almost sweet. His plays about race and homophobia were hilariously, frighteningly, astringently sour. When he targets misogyny, the result goes down far too easy.

In O’Hara’s vision of an all-male future, authoritarianism has tightened its grip to dystopian levels (though everyone seems wealthy and comfortable), and the masculine womb is as savagely policed as a woman’s ever was. The high concept is therefore a little bit Gattaca, a little bit The Leftovers, a little bit the Schwarzenegger movie Junior. According to O’Hara’s program note, though, his direct inspiration was Douglas Turner Ward’s Day of Absence. In this 1965 play, chaos erupts when, one morning, all the black people disappear. Mankind is mostly silly and broad, without the slicing rage of Ward’s piece—O’Hara hasn’t found a way to tap into our very real fear that men want us dead. But, on the bright side, it does feature a mildly funny bit about the emotional varietals of the word “dude.”

It can be faux-casual: “Dude, I’m pregnant.” It can establish distance: “Dude?” It can affirm and demand: “Dude.” Thus Jason (Bobby Moreno) tells his hook-up Mark (Anson Mount) that he’s expecting. It’s not exactly happy news. These guys are merely Fuckmates—we know because Jeff Sugg’s video design has floated this little bon(er) mot across the set as a scene title—and so Mark asks that he “get rid of it.” Then—thonk! The boot of the state comes slamming down: just talking about abortion with a government-supplied ob-gyn is a jail-able offense. Jason is forced to deliver. Wrinkle one: the baby is a girl, the first one born in a hundred years. Wrinkle two: she dies suddenly while she and her fathers are on a talk show. Wrinkle three: the now-couple start a religion in her honor, and the play itself pivots toward a mock-mystical new faith called, coincidentally, Feminism.

O’Hara’s strength as a writer is very specific: he excels at scenes in which people who are supposed to be supportive let you down with a bang. The best bits in Bootycandy were about warmth being suddenly snatched away—a boy, for instance, finding out that his parents blame him for being followed by a child predator. When it works, O’Hara’s humor is cold-water-in-the-face stuff; you gasp and laugh. This play hasn’t got Bootycandy’s crackle, since none of its cartoonish characters display any vulnerability, which makes them hard to disappoint. (Even the baby is represented by a bundle of cloth with glowing, inhuman eyes.) But its most successful moments of comedy do lie in our eternal venality. Mark’s nastiness to Jason has a fun soapy viciousness to it; Jason’s father (André De Shields) announces that he’s sold the rights to the couple’s wedding with a kind of antic glee; the Tweedledum and Tweedledumber talk-show hosts (Ariel Shafir and David Ryan Smith) gloat openly over the baby’s suffering. Farther than these moments of naughtiness, though, Mankind does not travel. Mark and Jason are caught up in events beyond their ken, and there isn’t enough transgressive energy in the fake religion gag to carry the play past the intermission. The tenets of the new Feminism—an unnamed She who will return, for instance—don’t shine any bright light on our current version. It’s a satire, you can tell, but of what? 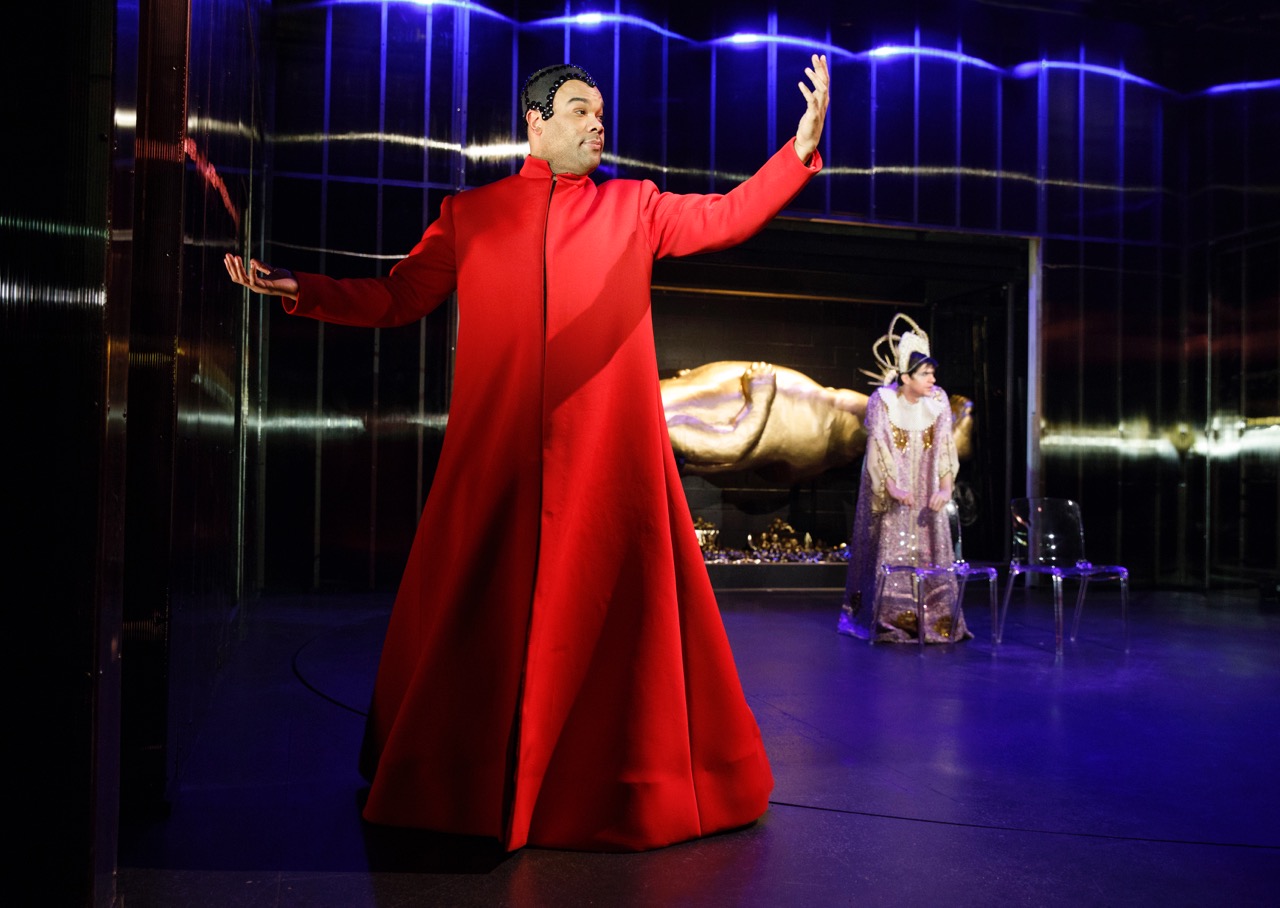 O’Hara directs his own work, and here he makes a few notable mistakes. These are mainly errors of tone (every actor oversells) and timing—a script that wants to be a short, sharp shock is played lugubriously. Some of the pacing issues are due to the extraordinary demands of Clint Ramos’s puzzle-box set, which requires time to rotate, shift, unpack, refit, vanish. It’s a beautiful object. It starts as a spinning, modernist freestanding cube (rather like a Frank Lloyd Wright pavilion), which has a handsome bedroom on one side and a sleek jail cell on the other. As the couple’s troubles go from private to public, the box eventually disassembles—it seems to be tearing apart centrifugally—into sections that can be garaged inside gleaming, proscenium-high walls. There’s real thinking in the design, and it’s clever in a pro-choice play to go from a filled and “pregnant” space to an echoing cavern. But the scene changes hugely slow the play, and the constantly whizzing carousel quality amplifies the show’s sensation that our author has had an idea that can’t quite get anywhere.

And what was the guiding idea here? Even though the play is pretending to be very angry about misogyny and climate change and unthinking religiosity, it positively wriggles with pleasure over its fantasy of male homonormativity. The clothes in the post-yonic era seem amazing (there’s a cute steampunk monocle); everyone seems to live in glossy abundance; Ariel Shafir’s amusing talk-show character sounds like what Tom Brokaw would sound like if he wore sleeveless leopard print. Basically, the future seems great. Heck, the jackbooted government thugs were right not to let Jason have the abortion—forced together, the couple fall quite deeply in love. Yet the actors don’t have the audacity to lean into this Planet of the Ken Dolls element. There’s zero sexual heat onstage. Surely, it can’t be a coincidence that both Moreno and Mount conclude their program bios with references to their real-life female partners. They may glitter in Liberace priest-robes in the show, but we shouldn’t read anything into that! (Chest bump, bro.) 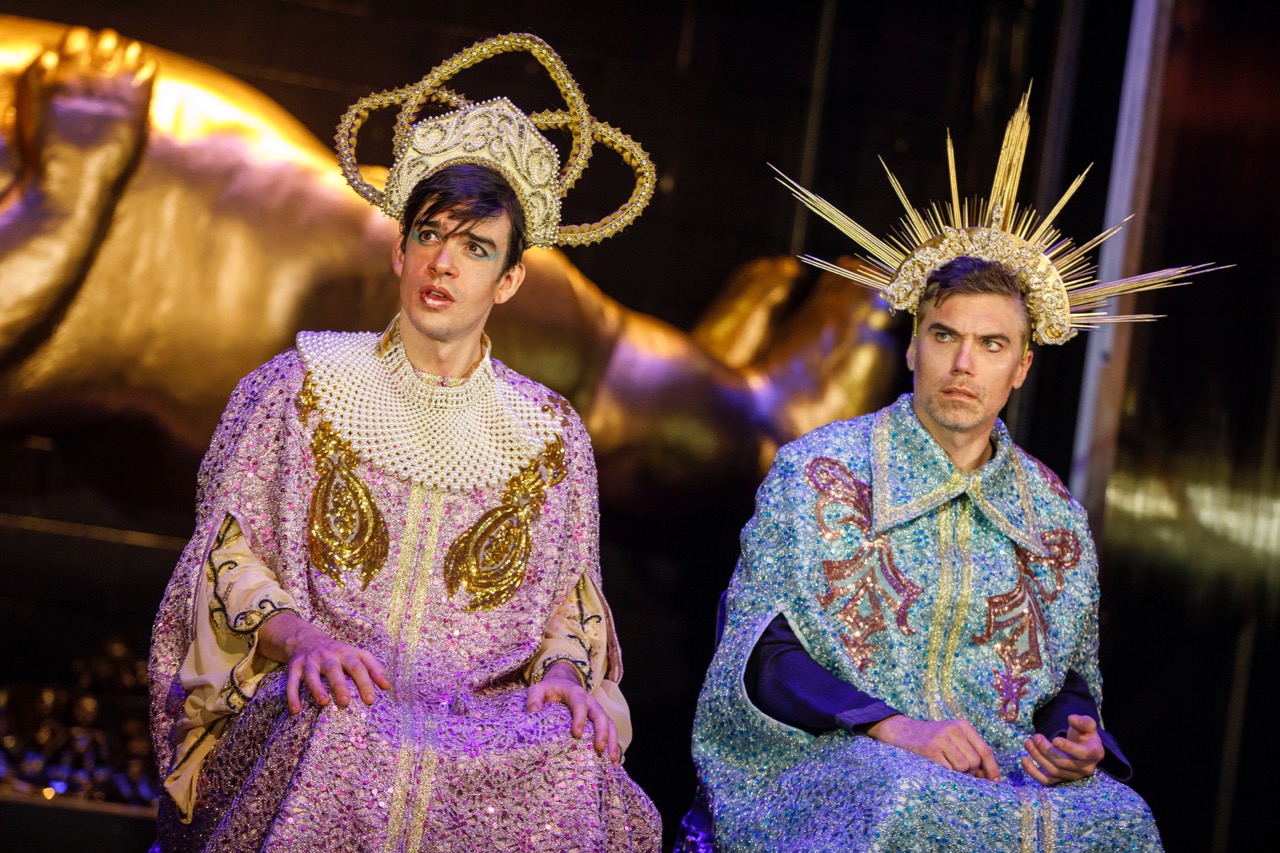 And that program creates another problem. O’Hara’s playwright’s note is so clear about Day of Absence as his own play’s forebear that Mankind’s relative complacency is cast into sharp relief. There’s no ferocity in this gentle comedy; no one seems at risk, and women’s total absence hasn’t much changed the world. Yet Ward’s play was furious. It was created to be performed by a cast of black actors in whiteface—“It is that Twist,” O’Hara tells us in his note, “that gives the play its Shout.” Indeed. Imagine the fear and protest inherent in that gesture. A shame, then, that Ward’s influence didn’t extend a bit farther here. Could an all-female cast do this play in male drag? Might that add some crispness and bite? We don’t know. Onstage, it was men men men. Despite the futurist trappings, we’ve seen this look before.