Nonfiction
On Time and Water 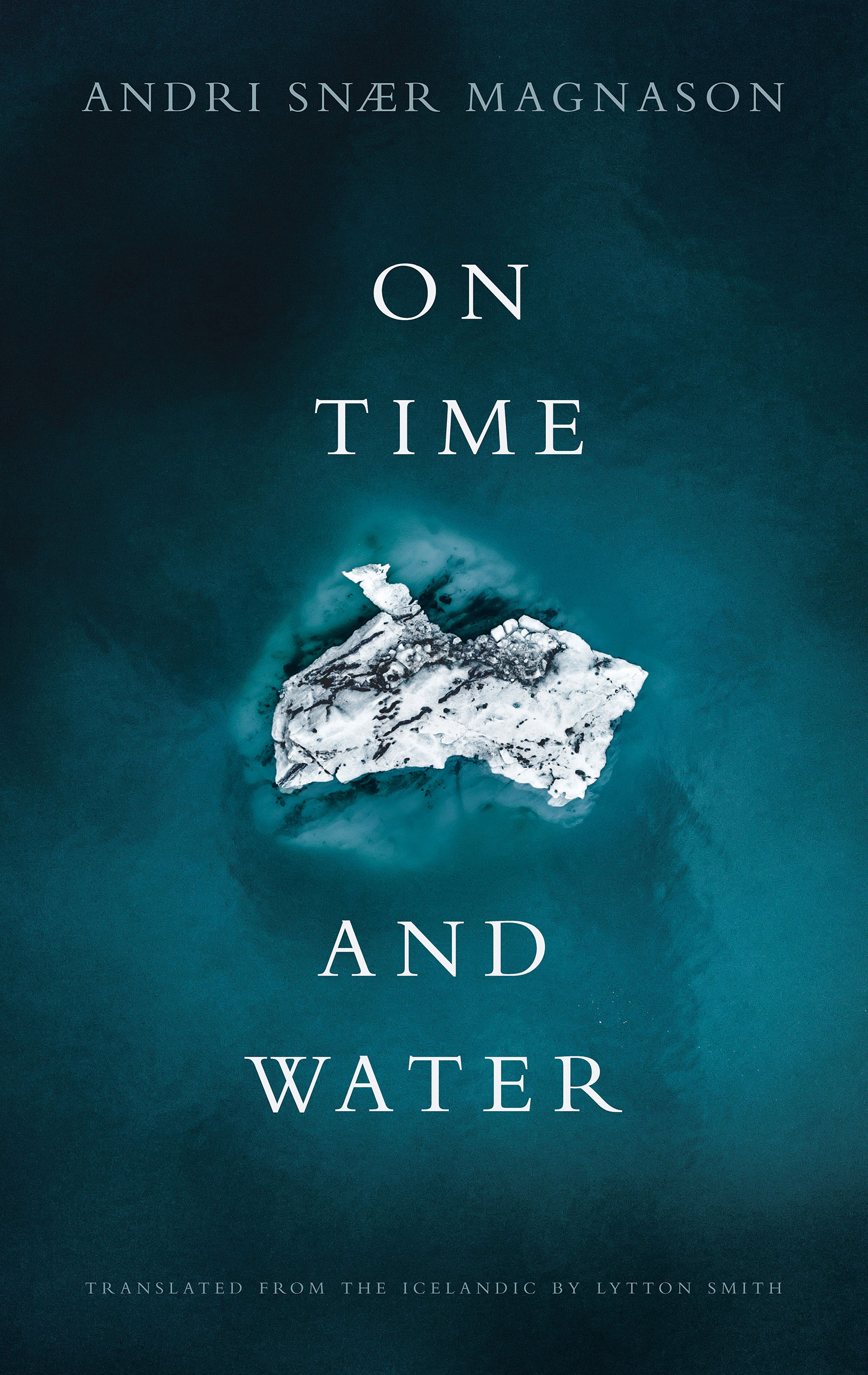 So what does a wordsmith do when challenged by one of the world’s leading climate-emergency scientists, one asking for the biggest story in the history of mankind to be heard and retold as only a poet can tell it, to help stave off the final destruction of the planet’s ecosystem and the demise of the human species?

In his fine work On Time and Water, Andri Snær Magnason describes such an encounter: with Professor Wolfgang Lucht from the Potsdam Institute of Climate Impact Research. And this book is his response.

As Magnason tells it, the meeting took place when he was traveling the world with Dreamland, a book he wrote on the energy policies practiced for decades by a succession of Icelandic governments, from the nationalist left to the liberal right, with devastating impact on Icelandic nature.

When unspoiled wilderness on the east coast of the country was marked out for a massive hydroelectric power plant, with no other purpose than powering an Alcoa aluminum factory to be built in the beautiful Reyðarfjörður (Fjord of Whales), people had had enough and fought back. But after years of campaigning, pleading, demonstrating, enlisting supporters from culture and science and the general public, arguing with emotions and data, submitting appeals to local and national authorities, protesting on site and off, the battle was ultimately lost. Natural wonders of stone and water, the habitat of flora and fauna since the Ice Age, disappeared beneath the stagnant surface behind the gigantic dam. But the defeat proved to be the starting point of new environmental thinking in Iceland, and Dreamland was a confirmation of that.

Magnason was prompted to start writing Dreamland after a conversation with a Reykjavík taxi driver who claimed that poets and novelists knew nothing about the reality of energy politics, and therefore shouldn’t be meddling in it. Now Professor Lucht was challenging the Icelandic author to do what he felt he and his fellow scientists were failing to do: usher human beings to a tipping point of understanding and so propel us to take action against the titanic destructive forces we have unleashed on Earth’s ecosystem. Magnason could help achieve this by using words that could reach the core of what we’re made of. What is a writer for, if not that?

On Time and Water describes its maker’s search for stories and ideas to help bring us back from the brink. He finds them close to home, in the accounts of his grandparents, some of whom were pioneers in exploring Iceland’s biggest glacier, Vatnajökull, which at the time was an unconquered icy giant. Their undying love for it and the adventures they experienced in its landscapes of frozen water become, in the book, an exemplary tale of how man and nature can coexist.

For Magnason, his grandparents’ stories also provide an opportunity to place himself in Time, and by extension his own children and possible grand- and great-grandchildren. The individual human lifespan is measured against the years it has taken Man to damage the ecosystem and the timeline of consequences, the future awaiting us with Earth’s further demise—the melting of the mightiest glaciers, the rising levels of acidic oceans, the forest fires and the draught, the mass extinction of plants and animals, and following centuries of war and cruelty, the vanishing of our own species.

The scientist from Potsdam is right: we must turn back from that apocalyptic scenario.

To honor the professor and his hardworking colleagues in climate-impact research, Magnason weaves their findings into the narration, pH values and all. For many readers it will be the first time they encounter much of this information, and one hopes that when retold by such a writer, the reality of the statistics reaches them better.

It is a book rich in stories and ideas—the author’s knowledge of old Norse mythologies allows him to link the world-mother of Nordic mythology, Auðhumla, with her ancient sister in the Himalayas, connecting the two places over time and space, and with the current situation on the globe. It is all well wrought together in the flowing conversational style we have come to expect from Magnason’s works.

What I miss from On Time and Water, though, is a harder look at how we’ve come to find ourselves in this current state. Yes, the consuming man is greedy and needs ever more energy to fuel his bonfire of vanities. Yes, the poor have benefited from advances in technology. Yes, we must all act responsibly and remember to turn off the lights at night and vote right-thinking people into power. But this analysis and the solutions it points to feels too general, the viewpoint too privileged. And maybe it’s the intertwining of the two that bothers me. For consumers are far from equal in their spending power; the poor and their children still have to work with their bare hands to earn a day’s worth of bread, e.g., in the cobalt mines of Congo; electricity is not available to all, and neither are general elections.

To get our mission off the ground, it’s necessary to start by placing blame where it belongs: at the feet of colonial Europe and its living heritage of using religion, political ideologies, racism, and gender discrimination to justify its plundering of peoples, animals, plants, and natural phenomena assigned the status of exploitable resources. Our expedition through the waters of history should bring us to the darkness of that heart. To fight back against that beating military drum—for it only knows the marching of the conqueror—I believe we should give the lead to the keepers of the Indigenous cultures that the predatory colonizers tried to destroy. Their inclusive belief systems might be the starting point for humanity’s renewed and queered relationship with Time and Water. By supporting their human rights to life and language, we would be welcoming their stories and knowledge of living with Earth and its beings as a road map to our common future.

On the other hand, I think we must examine what in human nature makes it all too easy for our species to act with such beauty and cruelty at the same time. Survival will require the reverse engineering of the human soul only possible by artists coming together from all fields. And it will be done with tools of the mind and the body that defy current logic and reason, some as old as man and some yet to be invented.

The title of Magnason’s book comes from Time and the Water, a cycle of poems by Icelandic poet Steinn Steinarr. Known for his cynical, almost nihilistic, poems from before World War Two, he surprised his countrymen when he responded to the postwar reality of the Holocaust and Hiroshima by writing a poem that reads as lyrical fragments from a codex of an undreamed future civilization. It is willfully obscure while direct in speech, and it gives voice to an experience that otherwise would have remained silent. These are its last two stanzas:

I feel time’s insistence
sink powerless
through a softness of water.

While eternity watches
my insoluble dream
with its single eye.

Now that shows us writers what a writer can be for.

For further reading of Time and the Water by Steinn Steinarr, in translation from the Icelandic by Christopher Burawa and Cynthia Hogue, visit Asymptote here.

Sjón is an Icelandic author of novels, poetry, libretti, and screenplays, whose award-winning works have been translated into forty languages. His latest novel, Red Milk, will be published by MCD Books at FSG in autumn 2021.