The artist’s show delves into a cultural history of plants. 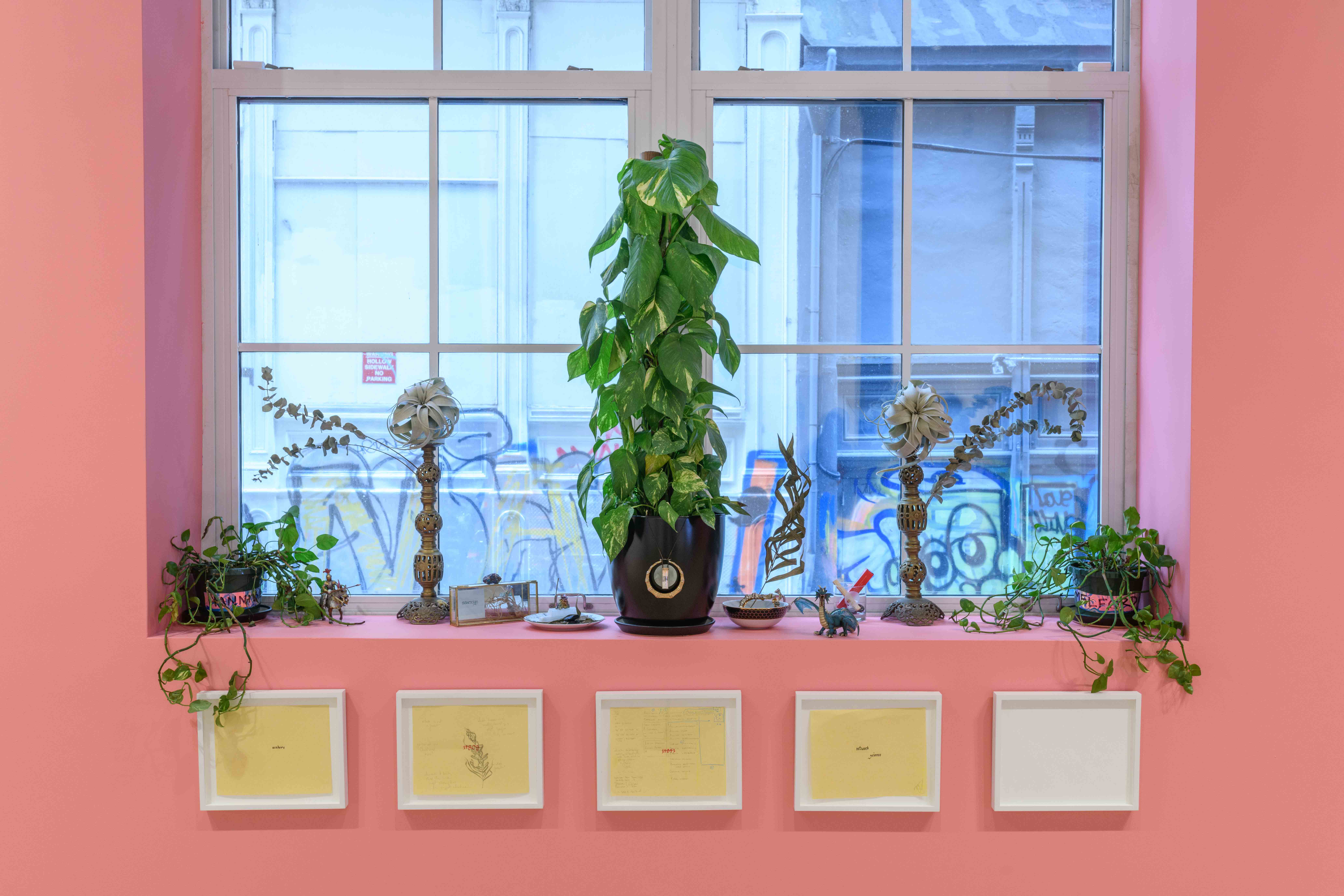 Adjua Gargi Nzinga Greaves calls her poetic practice ethnobotanical literary criticism. But if an ethnobotanist sees the plant as a serviceable employee, Greaves sees it more beautifully as a miraculous alien sentience, a co-creator of reality. In her work, plants, like libraries, stow within themselves archives, memories, evidence. Because their intelligence is held somewhere beyond language, though, many humans believe plants to be stupid and good for killing. This human extractiveness is the essential trait of what philosopher Bolívar Echeverría calls “whiteyness,” the ethos of the ethnically and ethically white person whose service to capitalist expansion is intrinsic to their identity. Greaves equates the violence that plants endure at the hands of the extractive human with the violence of anti-Blackness. In Of Forests and of Farms: On Faculty and Failure (2020), she writes:

and the naked empire said

THEY ARE NOT SMART ENOUGH TO FEEL PAIN

Of Forests is the most recent in a series of essay-poems that might act as the legend to Greaves’s current exhibition, The x in florxal is silent when spoken, which opened at Artists Space on the 2021 vernal equinox. The show is an unfolding of those writings, which, like her art, are defined by the mode of collage. Her exhibition of pasted-up artworks, assembled potted plants labeled with human names (Hannibal, Gertrude Deuxieme, and Melford among them), and heraldic found objects is inter-, sub-, and meta-textual. It’s a detective story, a fragmented self-portrait, an ethnographic puzzle, an annotated bibliography all at once, and a bouquet of notations that may or may not hint at an ordering narrative to be found, somewhere beyond. 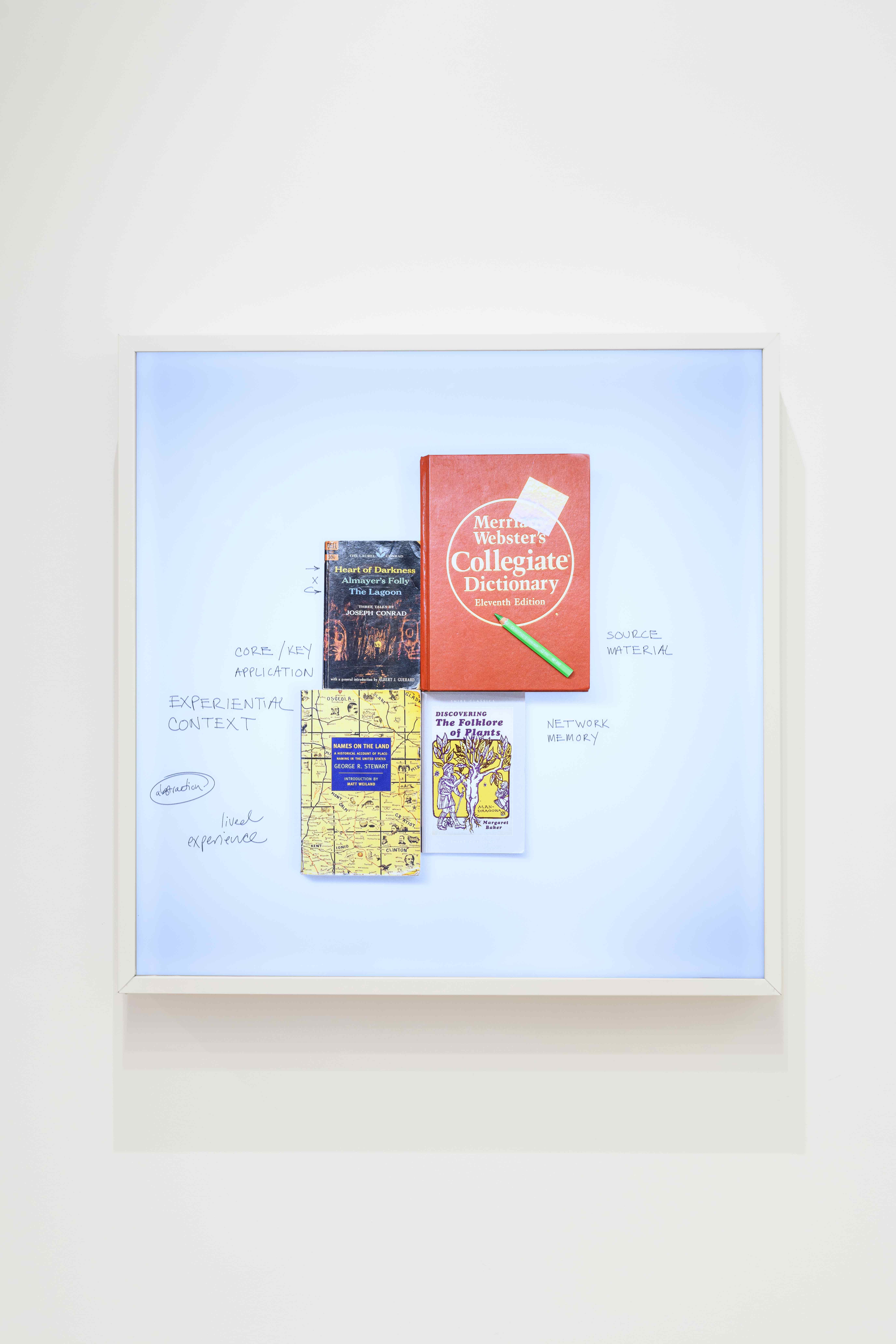 The exhibition is installed in one room, half-painted a dusky rose. First: mounted to the wall to the left of the entrance is a large, torso-sized lightbox, INDEX (2021), that suggests an interpretive structure for the series that follows. It illuminates a photograph of four books arranged in the composition’s center, in an asymmetrical grid: George R. Stewart’s Names on the Land: A Historical Account of Place-Naming in the United States; three tales by Joseph Conrad, among them Heart of Darkness; the eleventh edition of Merriam-Webster’s Collegiate Dictionary; and Margaret Baker’s Discover the Folklore of Plants. Written in the margins is an oblique taxonomy of what’s inside the volumes: lived experience, abstraction, experiential context; core/key application; source material; network memory. 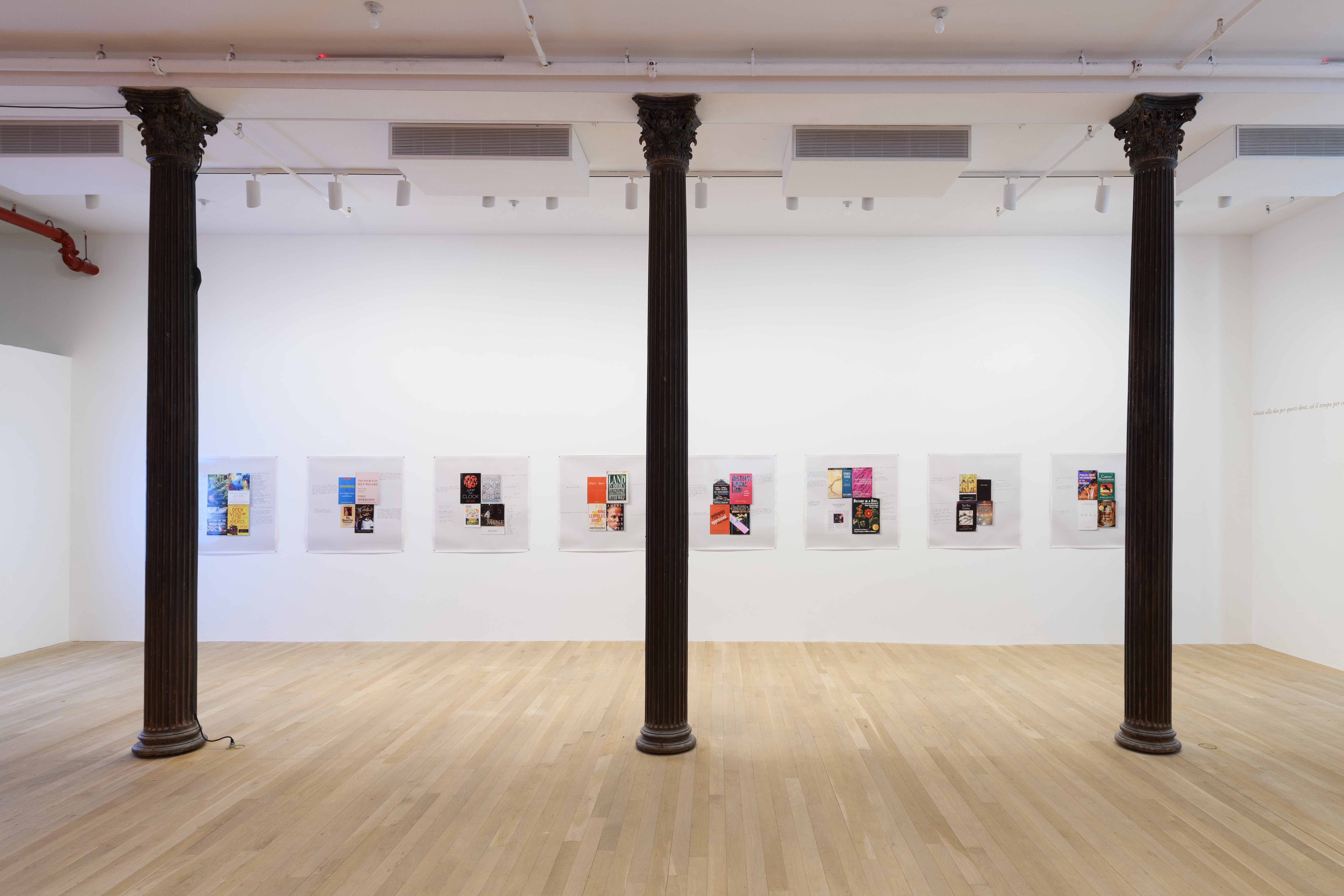 The next eight chromogenic prints (all 2021, each with four different books in the middle, black ink scribbling the white space at the edges) obscurely sketch a cultural history of plants as imbricated in the history of race and racism in America. In them, Greaves subtly bibliographs the relations between an anti-environmental conception of plant life based on value-productivity, the profuse operations of anti-Blackness, and the development of our global economy—and how these relations are networked in language, pictured in literature, systematized in science and education. But also indexed are glimmers of the respite that would be possible if we were to learn from the plants, and of other ways to be with them. 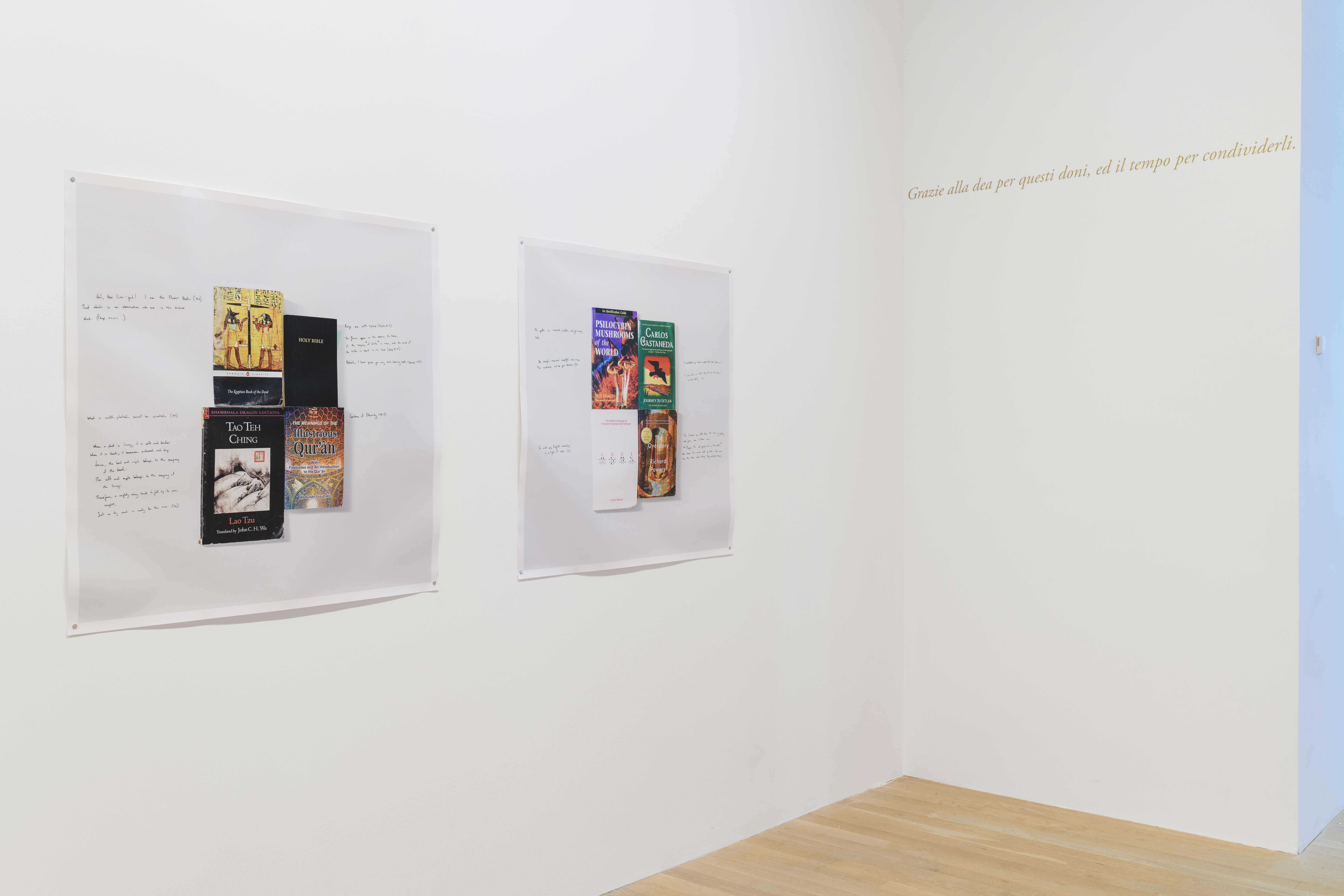 If plants are beyond language, Greaves has little choice but to express herself in it—but it’s an agonistic relationship. In her public readings of her poetry, she has a technique of revising her poems out loud, in real time, tweaking the lines over and over. The words are never quite right, the poem is never finished. Similarly, her notes, like her essays, are littered with TKs (publisher’s shorthand for a word one has yet to find). In the exhibition, the torrents of communication will suddenly freeze: she skips from English to Italian to Russian without translation, she leaves a picture frame in one series empty. “Take good care,” Greaves has warned, “to shape with language / worlds that want to hold us all.” Perhaps the languages at her disposal are too impoverished to afford that welcoming. She makes that poverty glaring.

In her writings, Greaves quotes bell hooks inveighing against how women of color who compose theory are dismissed if their writing is too clear, not adequately obfuscated by academic jargon and arcane references. But Greaves also quotes Fred Moten’s advancing of “the anarchic organization of phonic substance [that delineates] an ontological field wherein black radicalism is set to work,” and Kevin Young’s argument for aliteracy, “a trickster-style technique that . . . provides a system beyond which one can be defined, even by writing.” Greaves’s work jags between these poles of readability. At Artists Space, she offers specimens both hermetic and plain. On several yellow sheets, she lists in faint pencil the Latin names of plants, recipes, ingredients, and she minutely sketches botanically accurate, identifiable foliage. (And facts: like that, when very thirsty, trees have been found to scream. I recognized this line from Peter Wohlleben’s The Hidden Life of Trees, where he explains that, when deprived of water, the tree trunk emits ultrasonic vibrations; it is “crying out” at a level far above human hearing.) 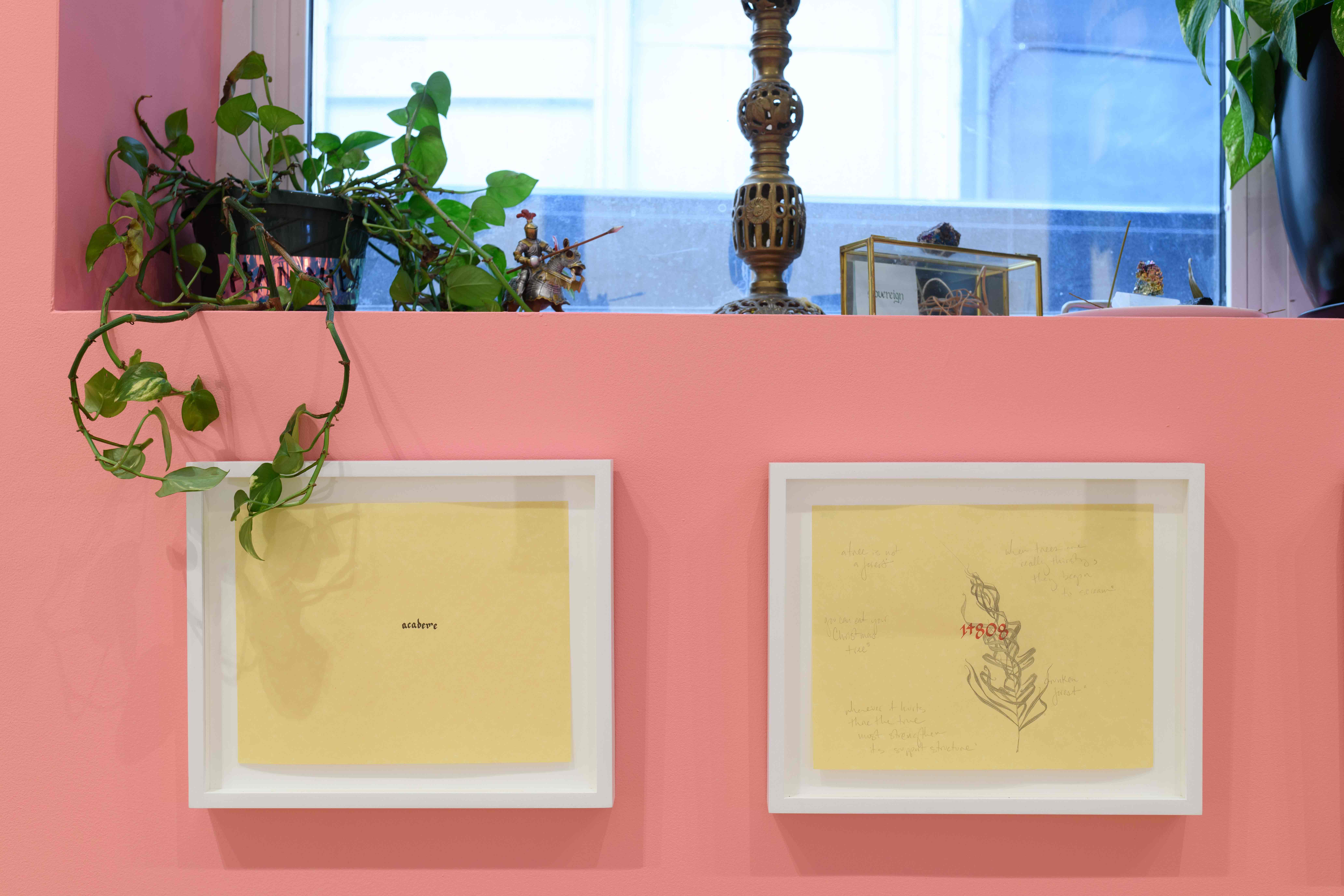 Greaves combines these scientific samples with hyper-personal notes that specifically locate her own self in the historical and linguistic structures she has diagrammed in the prints. On some of the papers hanging throughout the gallery, there are numbers that seem random, cabalistic, some printed in forebodingly seriffed red typeface—“14808”—others cramped in rushed pencil: “14841 of 36525.” A clue: in a 2018 essay, Greaves resolves to live for one hundred years, or exactly 36,525 days. It seems a dare, aiming to withstand an environment so malignant to her survival as our world is, and to such an extravagant, mythopoetic age. (She delivers in parentheses: “Maintaining life in this body requires vigilance you can’t comprehend.”) These sheets of numbers turn out to be the ticked-off days of Greaves’s life, like flower petals shed on the sidewalk, the numbers going up but far from finished. Like poems, like plants, life is still becoming. 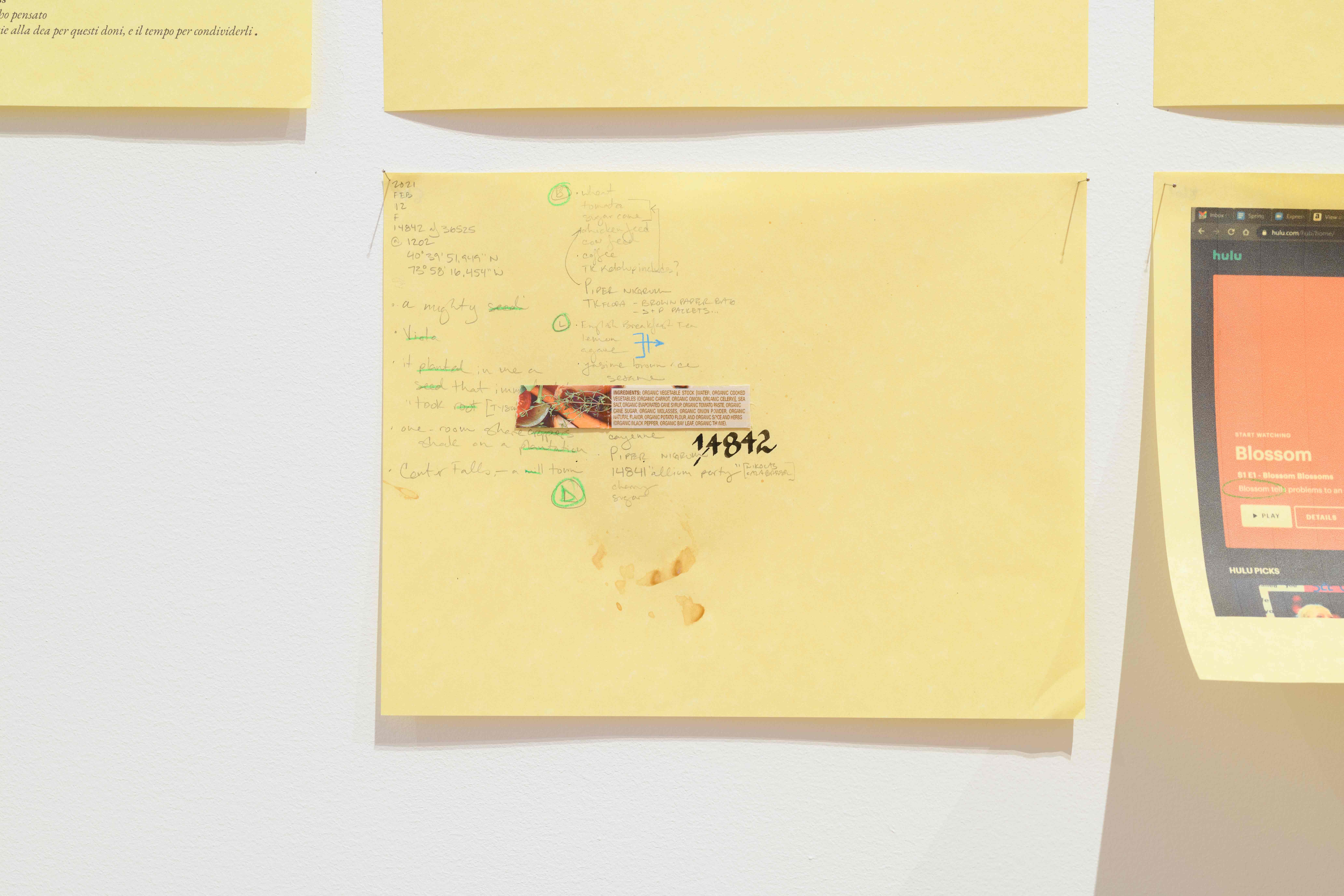 Strings of alphanumeric coordinates appear on a few of the pages, too. I plug one set into Google Maps; that day, Greaves had been in Brooklyn’s Prospect Park, by the doggie beach. Near the show’s end, you can trace where she has lived, found joy, found violence, found “interbeing” across the five boroughs of New York City, each instance marked with pins, on a map collaged with greenery, a feather, magazine cutouts (Autotelemachy, 2017). She allows the viewer to surveil her, to track the data of her being’s time and place. But the details defy construal. 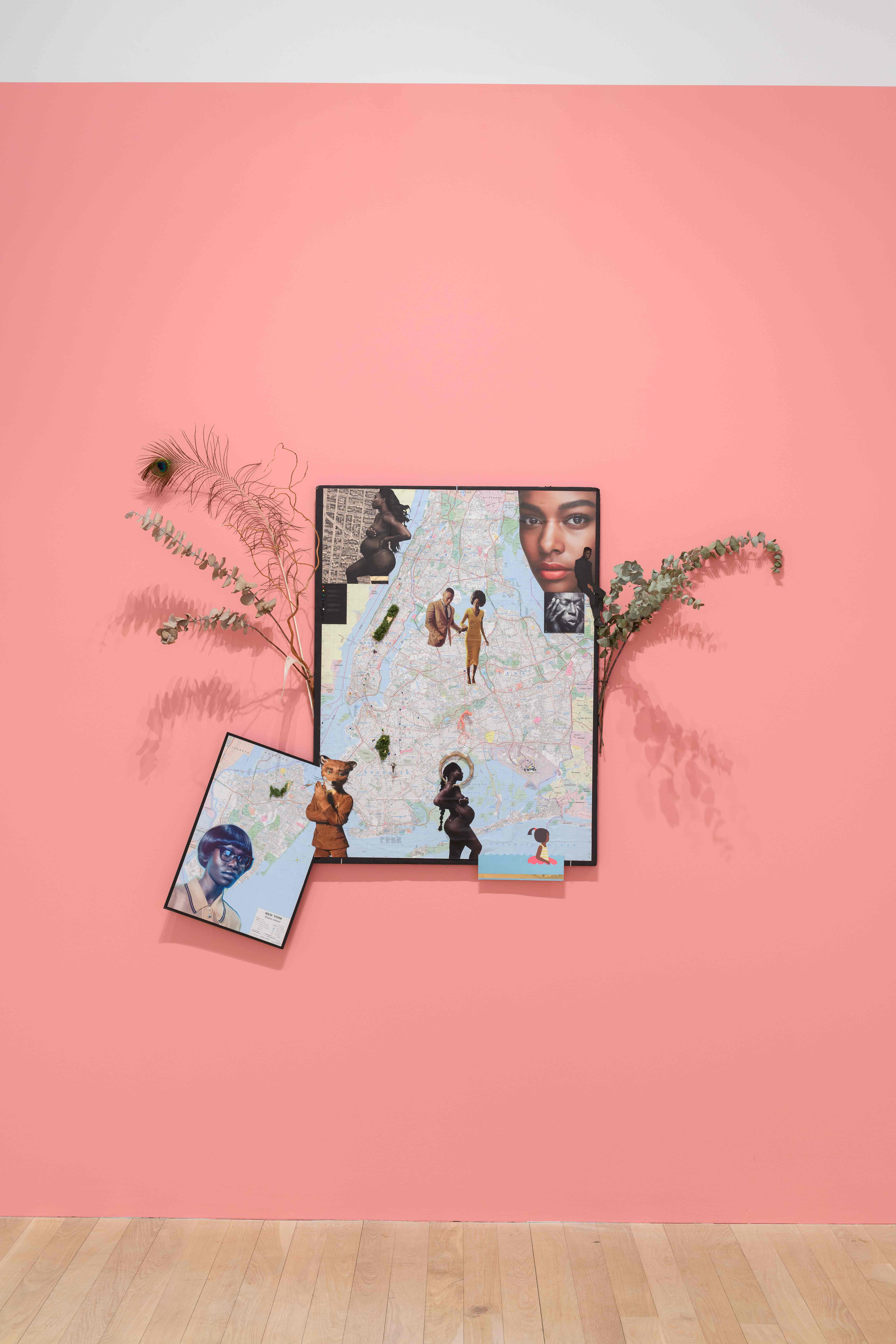 A tension builds between this knowing to no end and a blurry vastness of unknowability, between clarity and opacity, access and restriction. Excitedly tracking clues and looking up references, I start to wonder what I’m really doing by trying to locate and understand what the artist means. In Of Forests, there is a bibliomantic list of sources, printed across two pages in tiny font and with no paragraph breaks, like an impatient exhalation. Included is “The Gesture of Planting,” by that great refuser of rootedness, Vilém Flusser. I illegally download the piece, in which he sniffs at the farmer, cautiously and jealously waiting and watching his crops before the harvest. “And as we know,” Flusser rages, “planting is the root of ownership and the waging of war, that is, of waiting in the sense of persevering in one’s ownership.” Am I the farmer, greedily scrutinizing this greenhouse of ciphers until sense emerges? If the exhibition wants to hold something outside of language, inscrutable as a plant, is there a cruelty in harvesting this narrative of my own?

Seeking to interpret, am I fencing off the wilderness that might lie here, vegetally quiet?