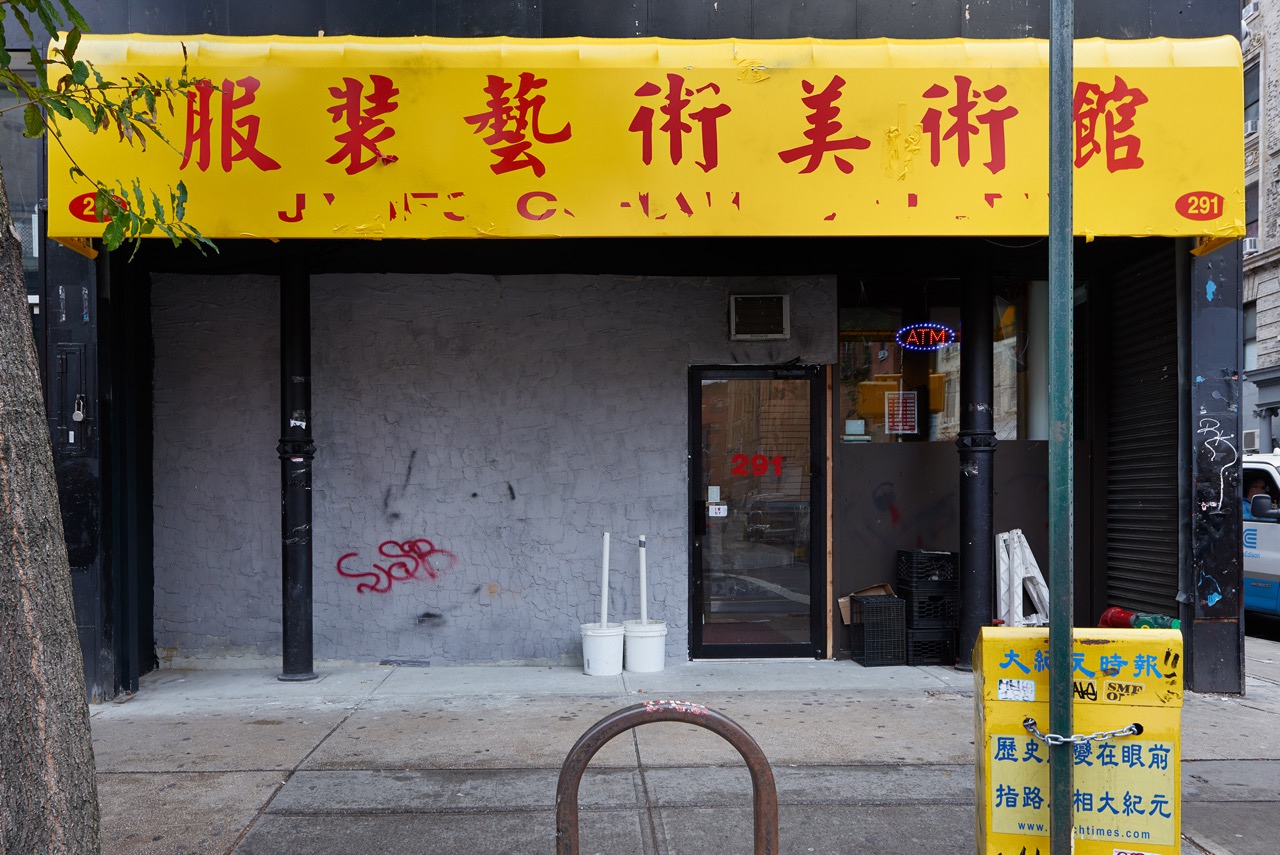 In late 2011, when I was working for a newspaper in Cairo, we once ran two different reports of the same protest: one journalist witnessed massive police violence and mayhem, while the other (stationed close by) saw nothing but a lot of people calmly milling around. It felt like we couldn’t trust our own eyes. This slipperiness of seeing (and, by consequence, of knowing) is Berlin-based artist Omer Fast’s favorite material, and to exploit it, his new exhibition at James Cohan’s Grand Street location plays a few tricks.

The first is the trick of manufacturing an artificial environment that looks deceptively real. While in the past Fast has transformed his exhibition spaces into facsimiles of airport lounges or doctor’s waiting rooms, here he has converted the gallery into a neighborhood shop. Viewed from the street, the once gleaming glass façade has been mostly walled off with (already graffitied) concrete, while a remaining window now features a neon ATM sign. The interior is complete with a yellowing linoleum floor, broken cash machines, cans of soda in a dingy fridge, and random cell phone accessories with markered-on prices displayed in a dusty vitrine. 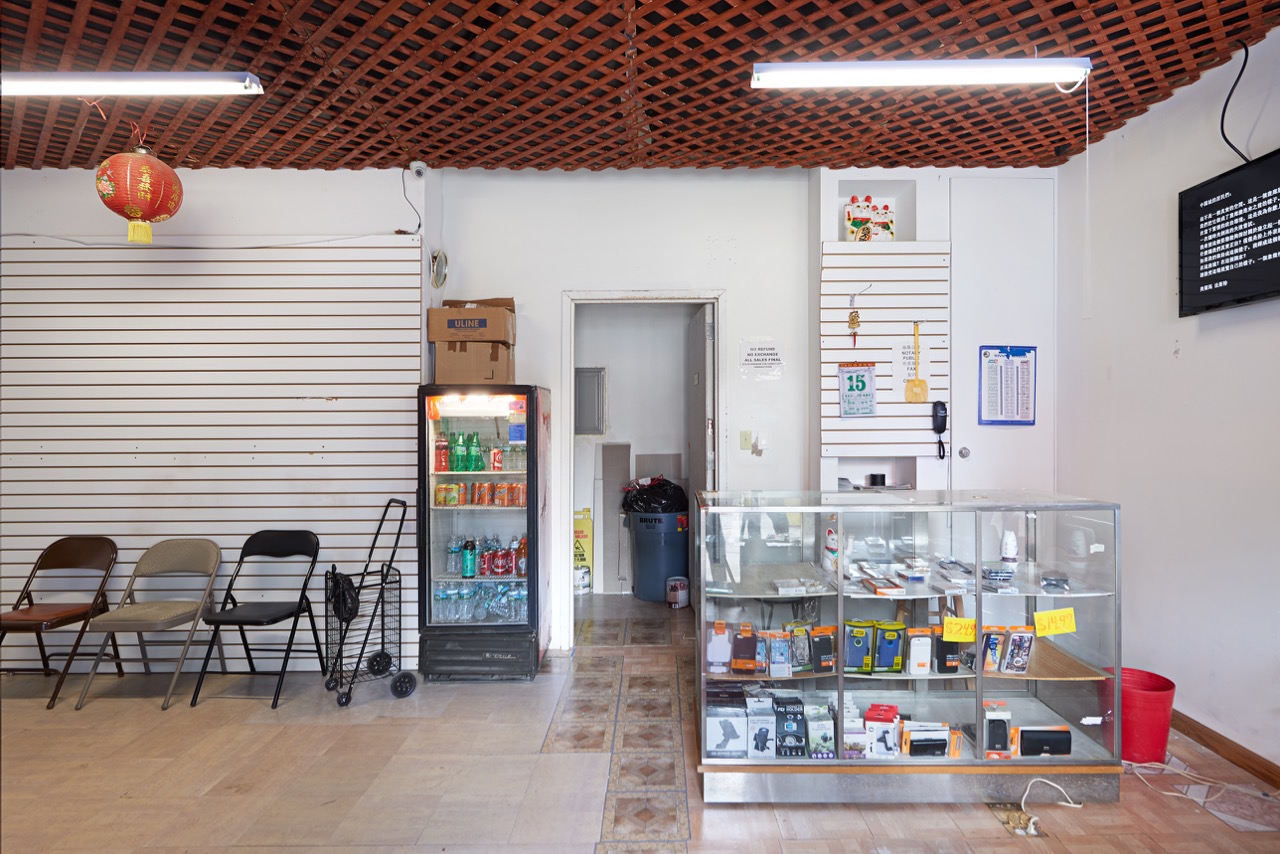 Next comes the trick of an authority figure telling you what you’re looking at. I imagine that many of the visitors are English-speaking art tourists coming to the fringes of Chinatown on the gallery circuit, and are likely already familiar with Fast’s maneuvers (and have probably read the press release online). But for those whom the artist perceives as “local,” there is a statement written in Chinese characters displayed on an LCD screen mounted high up on the right-hand wall. Along with some rather flat-footed, ambivalent art-world gesturing toward the process of gentrification, the statement informs them: “This​ ​space​ ​is​ ​not​ ​real. It​ ​is​ ​a​ ​gallery​ ​exhibition​ ​space.” (It must be noted that the simulated shop isn’t only confusing for Chinese-speakers. For a first-time visitor to the gallery such as myself, the set-up was disorienting to the point that I missed the exhibition altogether the first few times I walked by, until, with mounting panic in my chest, I peered in through the glass door and noticed a fancier-than-usual computer where a cash register should be.) 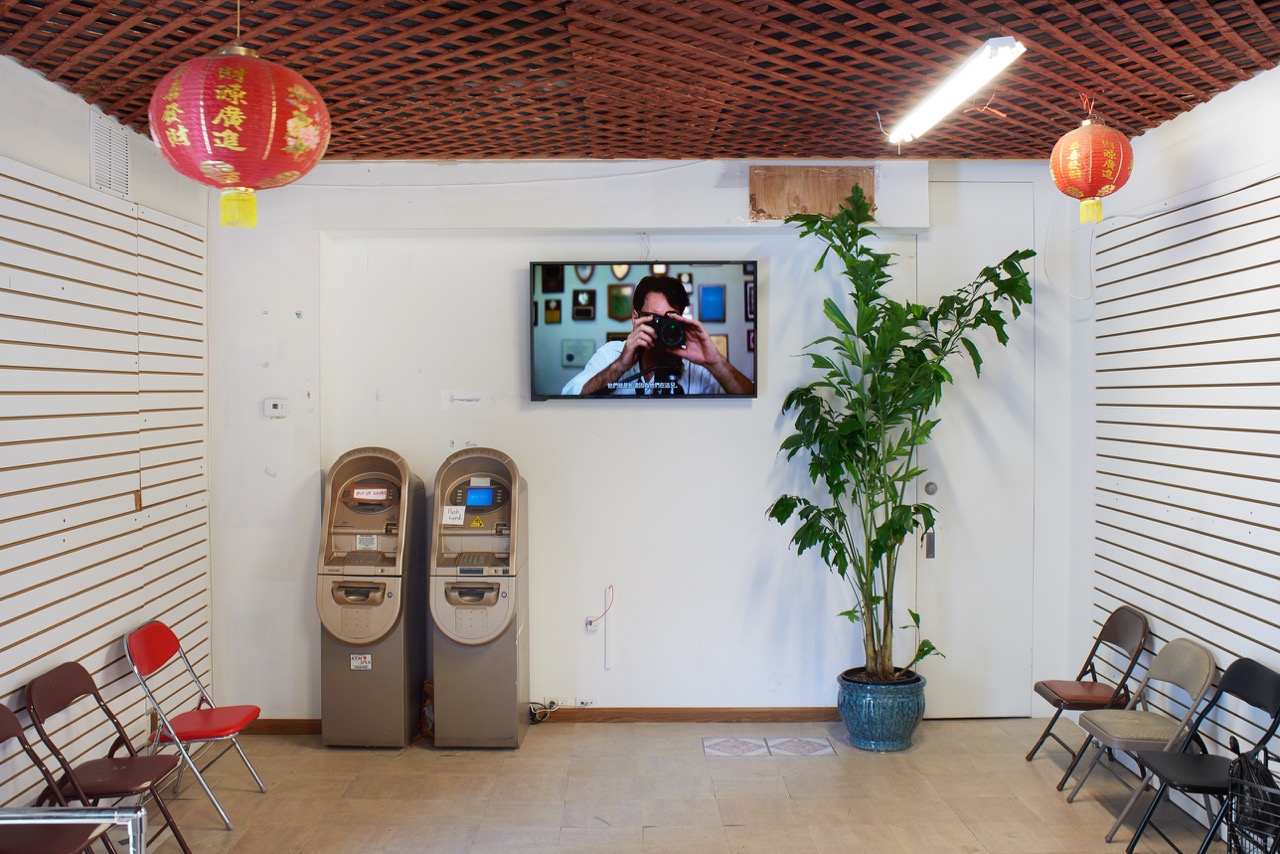 On the opposite wall is another LCD screen (also mounted at that neck-craning, waiting-room-TV height) that plays Fast’s Looking Pretty for God (2008). The slick video alternates between a photoshoot of young children in front of a green screen, and panning shots of elegant, gleaming caskets. The footage is accompanied by voiceovers of anonymous undertakers describing in detail the embalming process, or the ins and outs of running a mom-and-pop funeral home in the age of the big conglomerate. This straightforward commentary on the business side of dealing with death is already unnerving, but the viewer’s discomfort exponentially heightens when the children suddenly lock eyes with the camera and start lip-syncing to the voiceovers in a grotesque mimicry of Fast’s morticians. 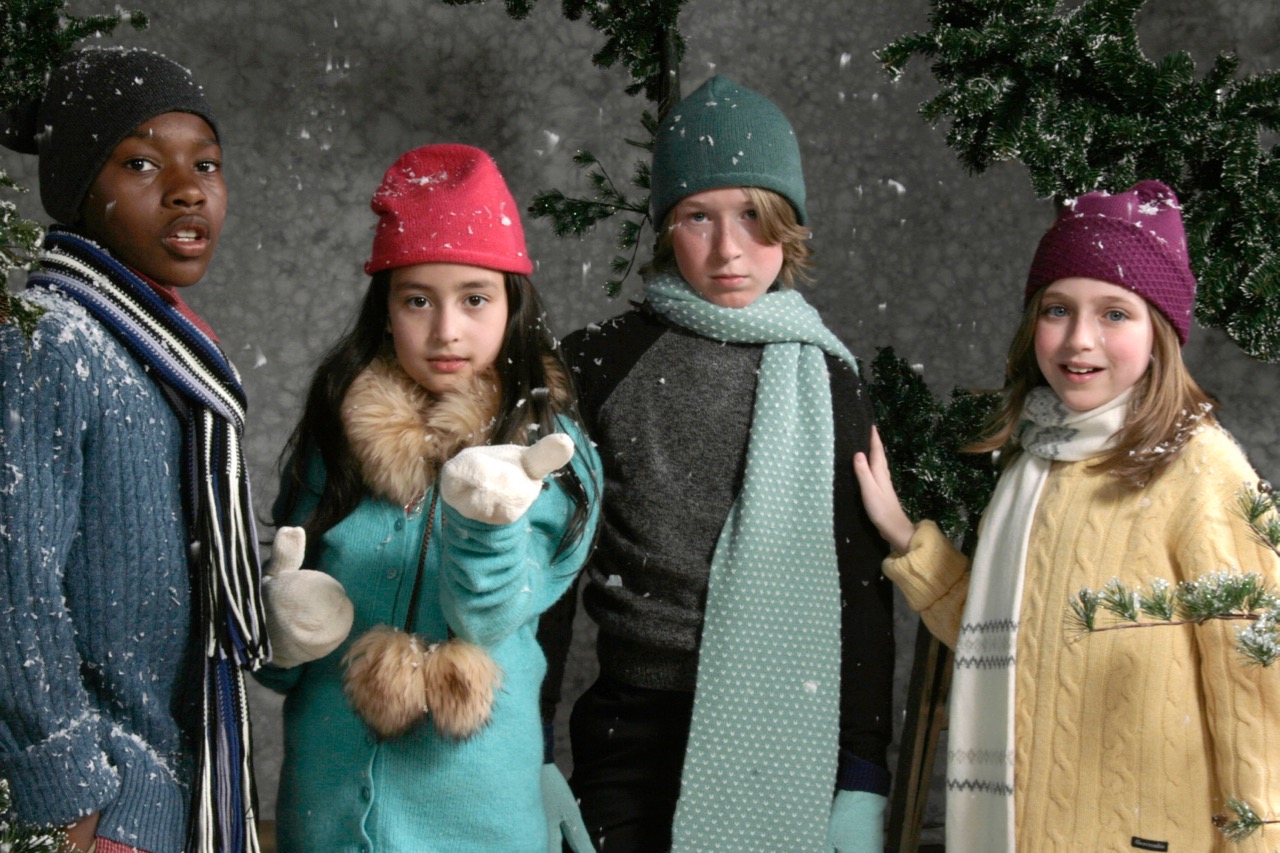 The video piece and the quotidian corner store backdrop seem annoyingly incongruent until you start to notice how the funeral directors describe their somewhat macabre craft: one characterizes himself as “a forensic artist trying to create in your mind’s eye . . . [a] proper memory picture.” “It’s not what you think . . . it’s not what you think,” another repeats. These statements are obviously analogous to what Fast is doing in replicating the 291 Grand Street that existed before James Cohan moved in.

And now, it seems, for something completely different. The gallery associate sitting behind the smudged glass counter provides you with a pair of 3-D glasses and directs you down a small corridor (past heaps of rubbish—real or affected, I wondered) that leads to a meticulously constructed black box theater (a perfectly antiseptic space, aside from some faintly visible ladders and folding metal chairs pushed against one wall). This is the screening room for Fast’s latest film, August (2016)—an imagined portrait of the great, early-twentieth-century German documentary photographer August Sander. It starts with the aged man lying on the floor of his home in the middle of the night. He opens his eyes and sees a bespectacled youth under the bed, his son—or rather a phantasm; for, as we quickly learn, the photographer is incapable of seeing anyone. He is almost blind, navigating his way around the room via a delicately constructed system of ropes that stretch between the walls. The piece intermittently flashes back to brighter days of taking pictures of young men in the countryside with his son’s aid. Dialogue only enters the slow-moving, seductively shot film when, in another hazy flashback, a hallucinated Nazi officer sits at the kitchen table, lamenting the son’s death. (Though the Nazi figure, like the old man’s blindness, is wholly fictional, Sander’s real-life son, a leftist, did in fact die in prison during World War II.) The officer commends the photographer for the “tender empiricism” of his work, and asks for his own portrait to be taken. 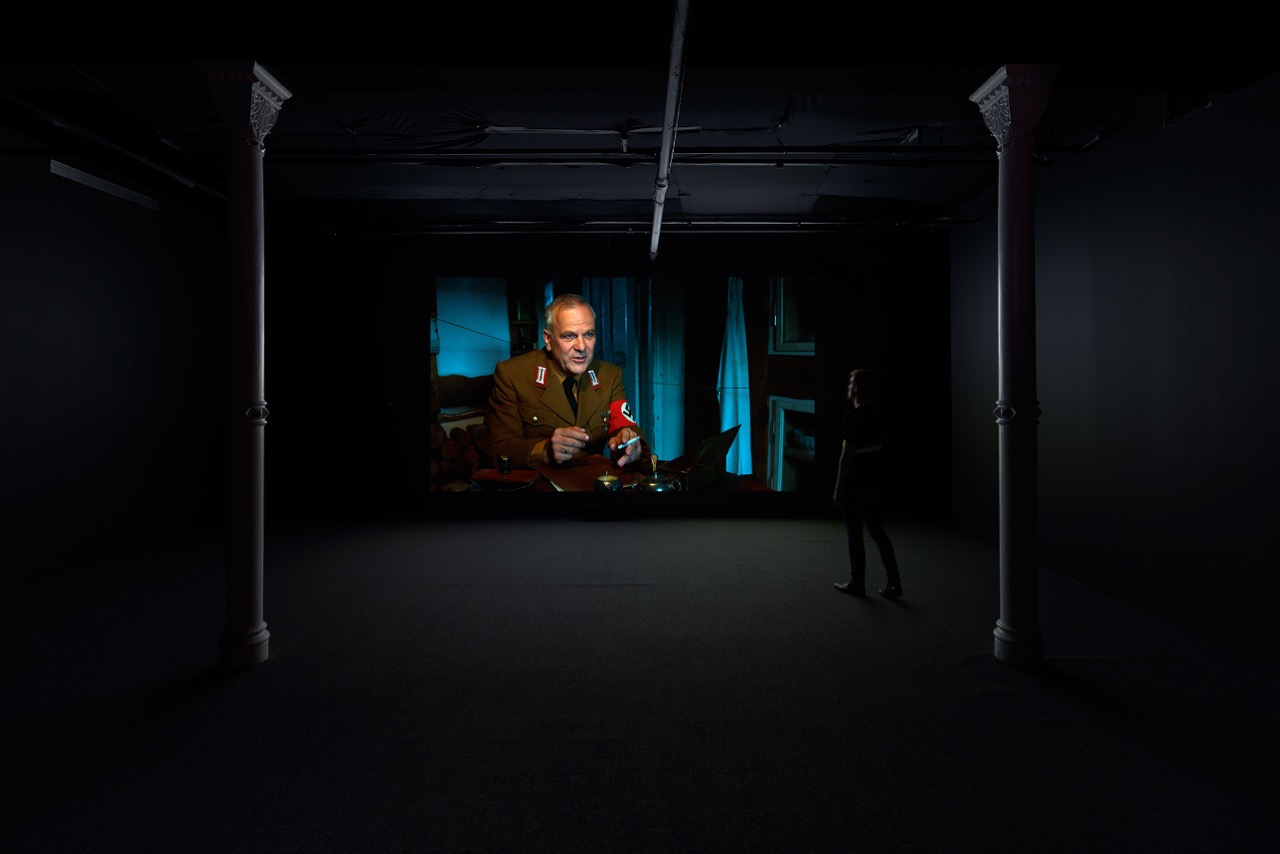 In many ways, August is typical Fast fare—he’s dealing with the fundamental processes of image-making, historical trauma, and multiple registers of loss (Sander lost not only his child during the war, but also the vast majority of his insanely epic People of the Twentieth Century project—some 40,000 pictures documenting and classifying the different strata of the German populace). Sander is an interesting subject for Fast: the photographer was obsessed with capturing an image of true, pure being, while the filmmaker is obsessed with the opposite—trying to reveal how truth never existed in the first place. This may account for Fast’s decision to shoot August in 3-D, which engenders less of an immersive, “realistic” quality than a heightened artificial one, emphasizing the composed, fabricated nature of the pictures that we see (whether on screens or in our own memories).

I had a hard time reckoning with how this high-production-value film accorded with the rest of the exhibition. Certain overarching themes clearly tied all three elements together: re-creating (and, inevitably, fictionalizing) memory; death both literal and figurative, of persons, places, times. But the commentary on neighborhood and community in the first room felt like a gimmicky set-up motivated by a desire for political correctness more than anything else. (“In​ ​a​ ​very​ ​tense​ ​political​ ​climate,​ ​this​ ​is​ ​my​ ​ambiguous​ ​gesture​ ​to​ ​you,” Fast writes to his Chinese-reading audience.) And in that, the exhibition unfortunately fell victim to a plague of the times: an anxiety to categorically acknowledge certain present-day ills (here, the gentrifying drive of the sleek art spaces that have been popping up in the neighborhood) and the artist or institution’s complicity in the forces that wrought them, no matter the relevance to the practice at hand. Art born of imperatives tends to disappoint. It would have been more powerful to simply be confronted with Fast’s story of the aging Sander: a man who spent a lifetime capturing photographic truth, no longer able to see anything but a distorted past.