Excess Hollywood: an efflorescence of effluvia, fratty energy, and lusting bodies in Damien Chazelle’s film about the golden age of cinema. 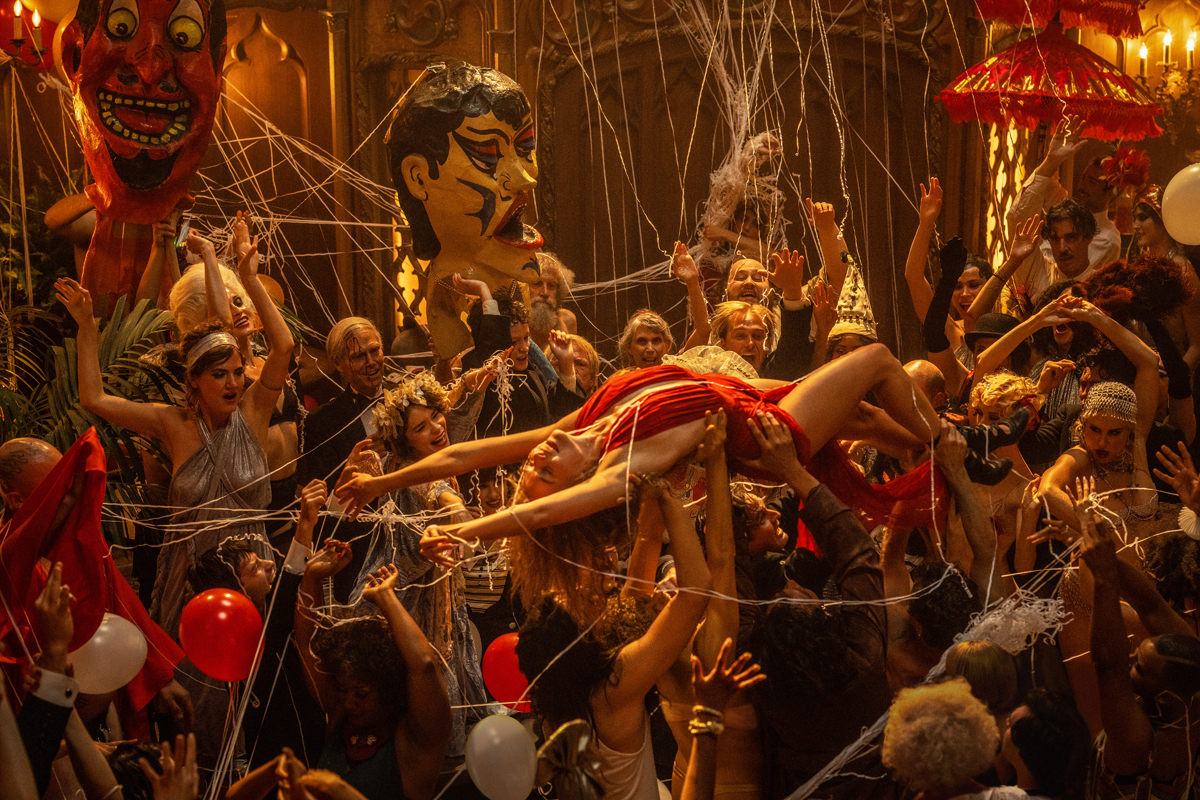 A distended saga about Hollywood from 1926 to 1932 (with a coda set in 1952), Babylon begins with a deluge of elephant shit and ends with a tearstained face. The film is awash in other (human) bodily fluids, too: piss, blood, vomit, phlegm. It is the most incontinent film of the year. 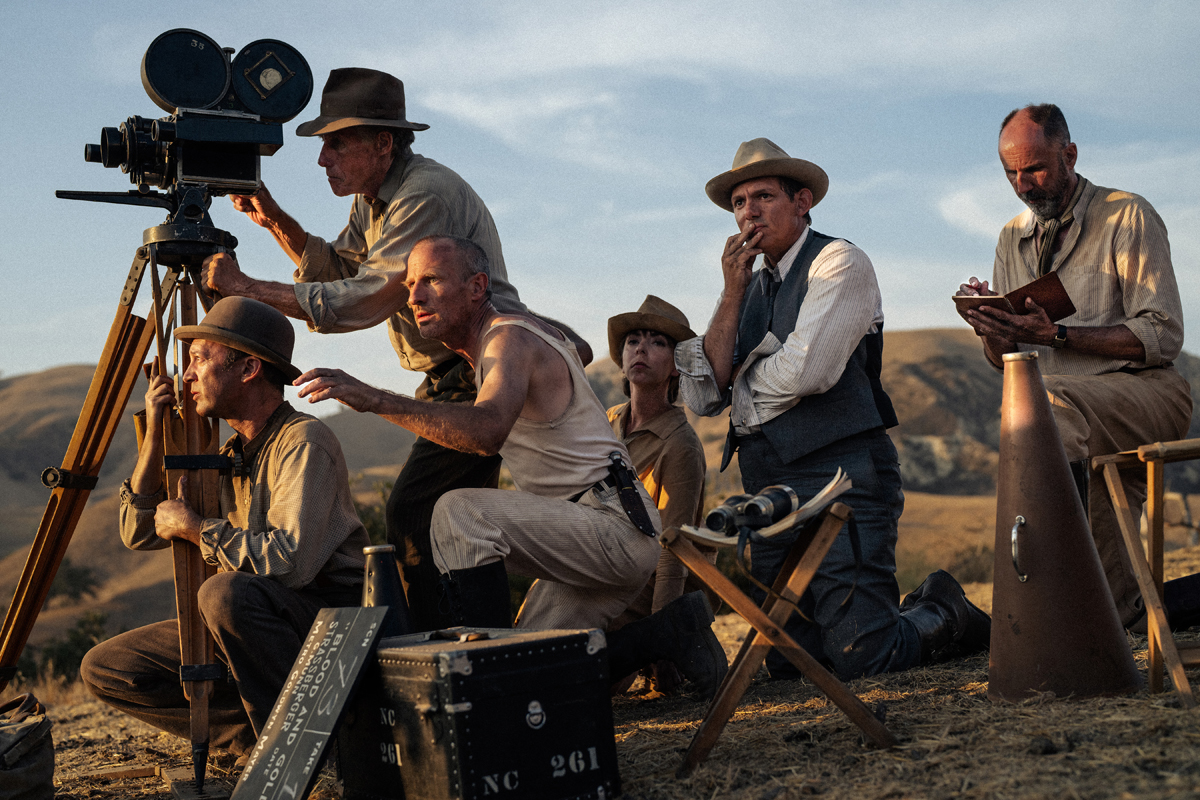 This leaky vessel is also the latest entry in a recent boomlet of features, all released since September, devoted to cinema’s past. These include Andrew Dominik’s sordid Marilyn Monroe quasi-biography, Blonde; Steven Spielberg’s mawkishly autobiographical The Fabelmans; and Sam Mendes’s ineptly sociological Empire of Light. Centering on six main characters, many of whom are transparently based on real-life figures, during the era when movies made the transition from silents to talkies and adopted a puritanical production code, Babylon belongs to a genre we might call the hysterical historical. Clamorous and benumbing, Chazelle’s film is a three-hour cartoon with expletives, dildos, and excreta. 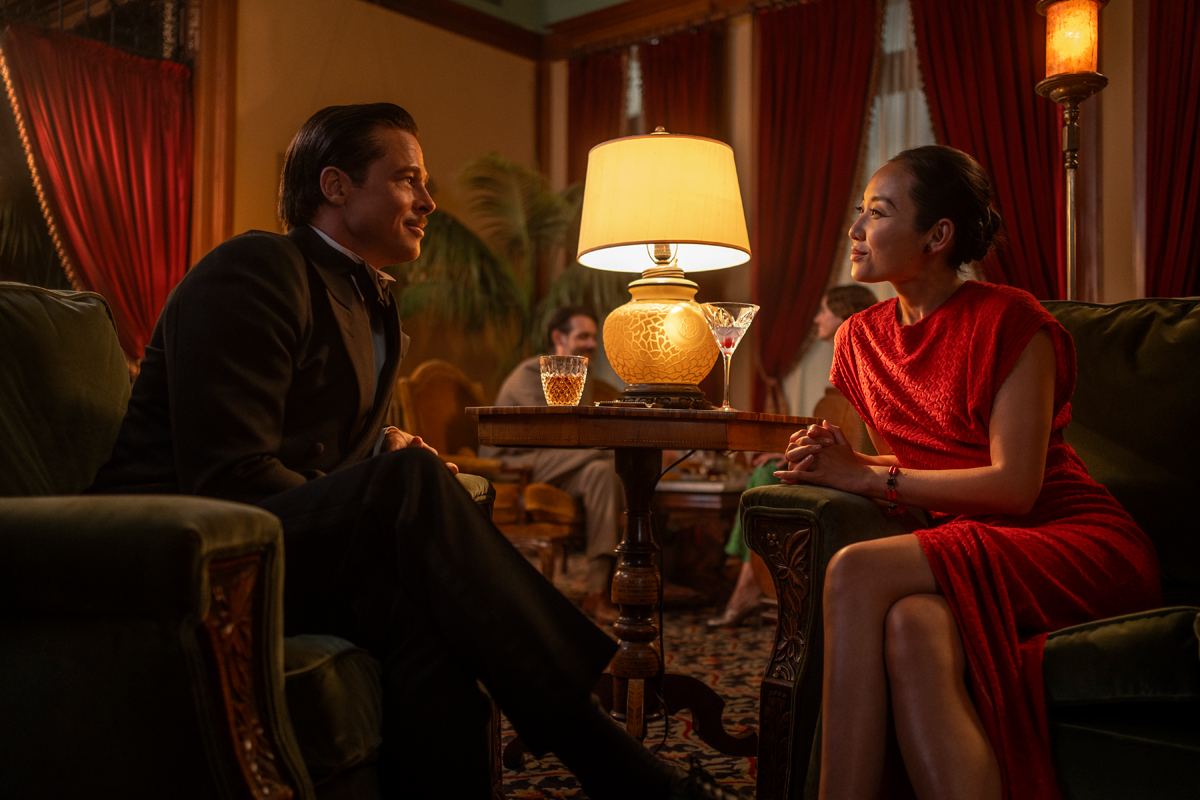 The title of this bumptious epic unimaginatively lops off a word from Kenneth Anger’s two Hollywood Babylon books, which have endured for years as queasy compendiums of the Dream Factory’s seamier side (the first volume was published in the US in 1965, the second in 1984). These chronicles, strewn with a fair share of myths, are rife with vile scandals and myriad degradations. Chazelle repurposes and contorts some of them, starting with the notorious 1921 death of an aspiring actress who had attended a blowout hosted by the silent-film star Roscoe “Fatty” Arbuckle. (His analogue in the film answers to “Piggy”; the ultimate fate of the surrogate for that unfortunate partygoer is unclear). 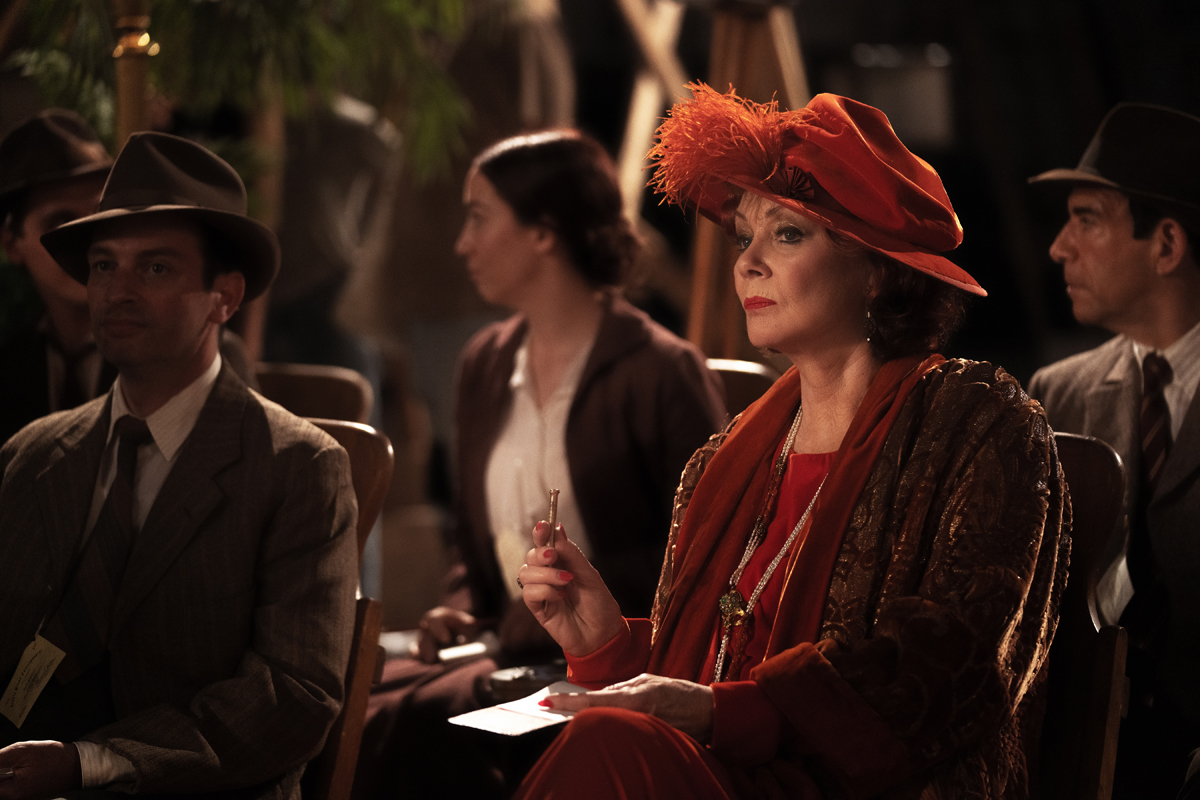 It would seem, in fact, that Chazelle has used Anger’s books as a template for his project. Or is it just a coincidence that Hollywood Babylon also opens with a pachyderm tableau (specifically, the eight enormous white plaster elephants that D. W. Griffith insisted on for 1916’s Intolerance)? Chazelle unquestionably set out to dramatize, to increasingly diminishing returns, these lines from the first few pages of Anger’s tome: “The Twenties is sometimes referred to as ‘Hollywood’s Golden Age,’ and golden it was, in sheer exuberant movie-making creativity as well as in financial returns. Film folk of the period are depicted as engaging in madcap, nonstop off-screen capers.” What Chazelle disregards is the sentence that follows: “The legend overlooks one fact—fear. That ever present thrilling-erotic fear that the bottom could drop out of their gilded dreams at any time.” 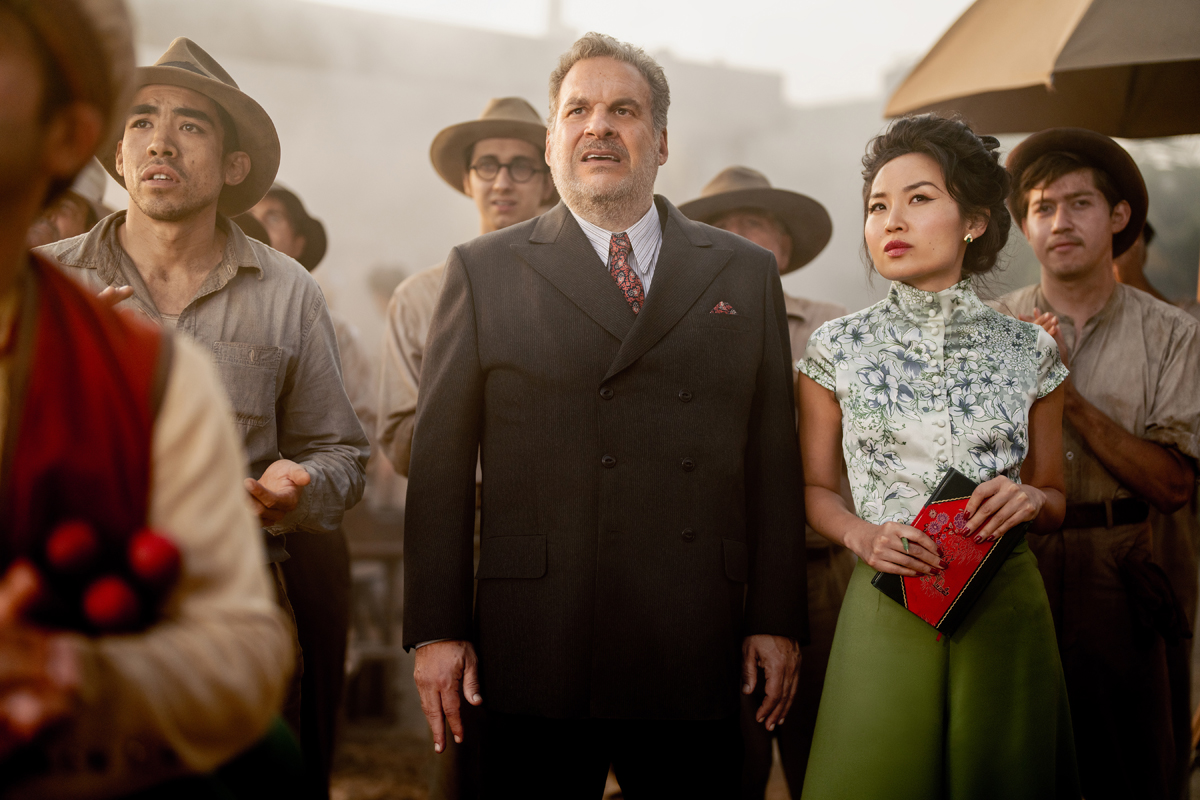 Fear is precisely what is missing from Babylon, which staggers from one manic set piece to the next. For as excitable (and apocryphal) as Anger’s prose can be, he nonetheless captures the despair and desperation that have been an inextricable part of Hollywood since the storied ’20s—and that have been the backdrop of scores of books and movies about the psychic cruelties of the moviemaking industry, ranging from Nathanael West’s corrosive 1939 novel, The Day of the Locust (and its 1975 film adaptation) to David Lynch’s destabilizing Mulholland Drive (2001) to Jean Stein’s haunting oral history from 2016, West of Eden. Any tragedy in Babylon—an off-screen suicide of a minor character, for example—is quickly followed by a sight gag or effluvia. 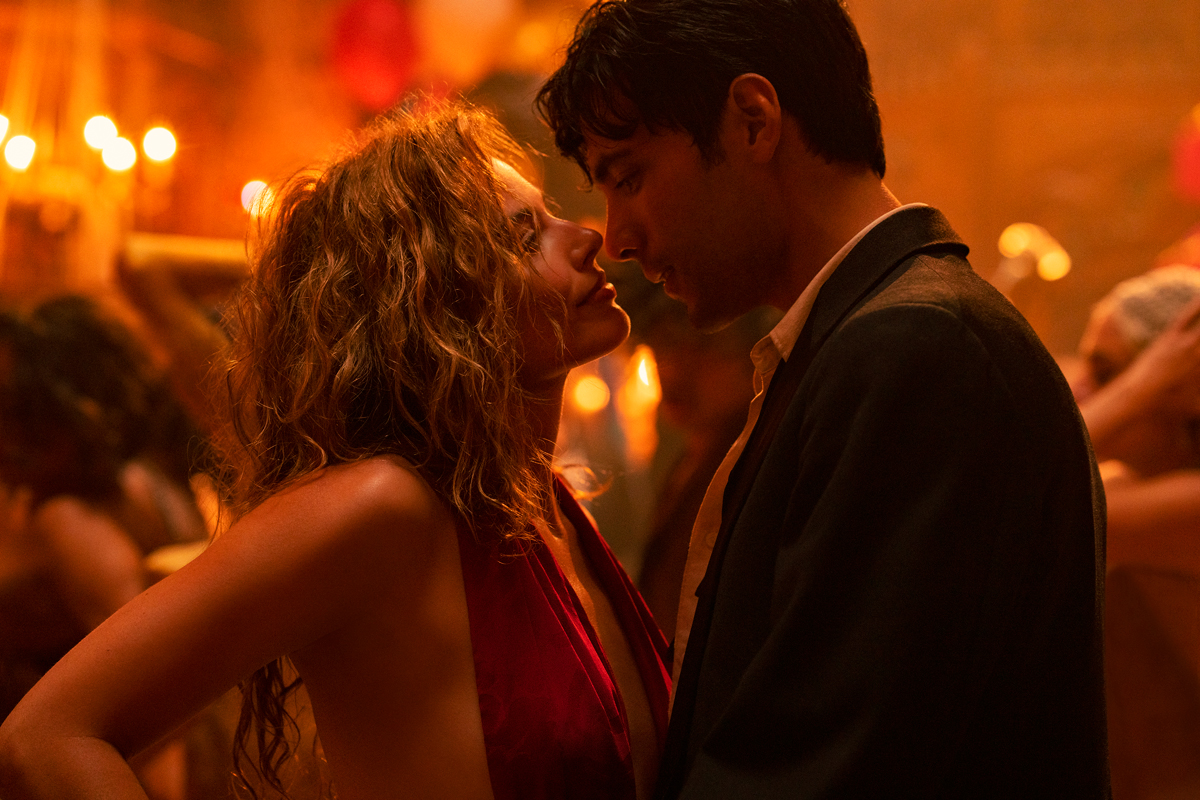 Only at the very end, when it slides into sentimentality, does Babylon ease up on the fratty energy. Its first big scene, a bacchanal held at the hangar-size mansion of studio macher Don Wallach (Jeff Garlin), introduces the film’s core sextet. Manny Torres (Diego Calva), who starts out as Wallach’s gofer but rises to become a movie executive, immediately falls in love with party-crasher Nellie LaRoy (Margot Robbie), a bawdy starlet-hopeful whose career trajectory resembles that of Clara Bow. Looking for the powder room amid all the lusting, thrusting bodies is Elinor St. John (Jean Smart), a gossip columnist whose surname nearly matches that of an actual Hollywood journalist of the time, Adela Rogers St. Johns. Stumbling into the orgy is Jack Conrad (Brad Pitt), a leading man who evokes real-life idols Douglas Fairbanks Jr. and John Gilbert. The carnal revelry slows down for a moment to make way for a slinky number (“My Girl’s Pussy”) by Lady Fay Zhu (Li Jun Li)—clearly a stand-in for the Chinese American luminary Anna May Wong—whose attire (top hat and tuxedo) and action (smooching a woman spectator on the mouth) are feeble homages to Marlene Dietrich in Morocco (1930). Ace Black trumpeter and bandleader Sidney Palmer (Jovan Adepo) sets the tempo at the Wallach rager, his bombastic jazz composed by Justin Hurwitz, who has scored all of Chazelle’s five features to date. (The least fleshed-out of this principal group, Sidney will confoundingly be used to illustrate one of Hollywood’s most grotesque practices, blackface.) 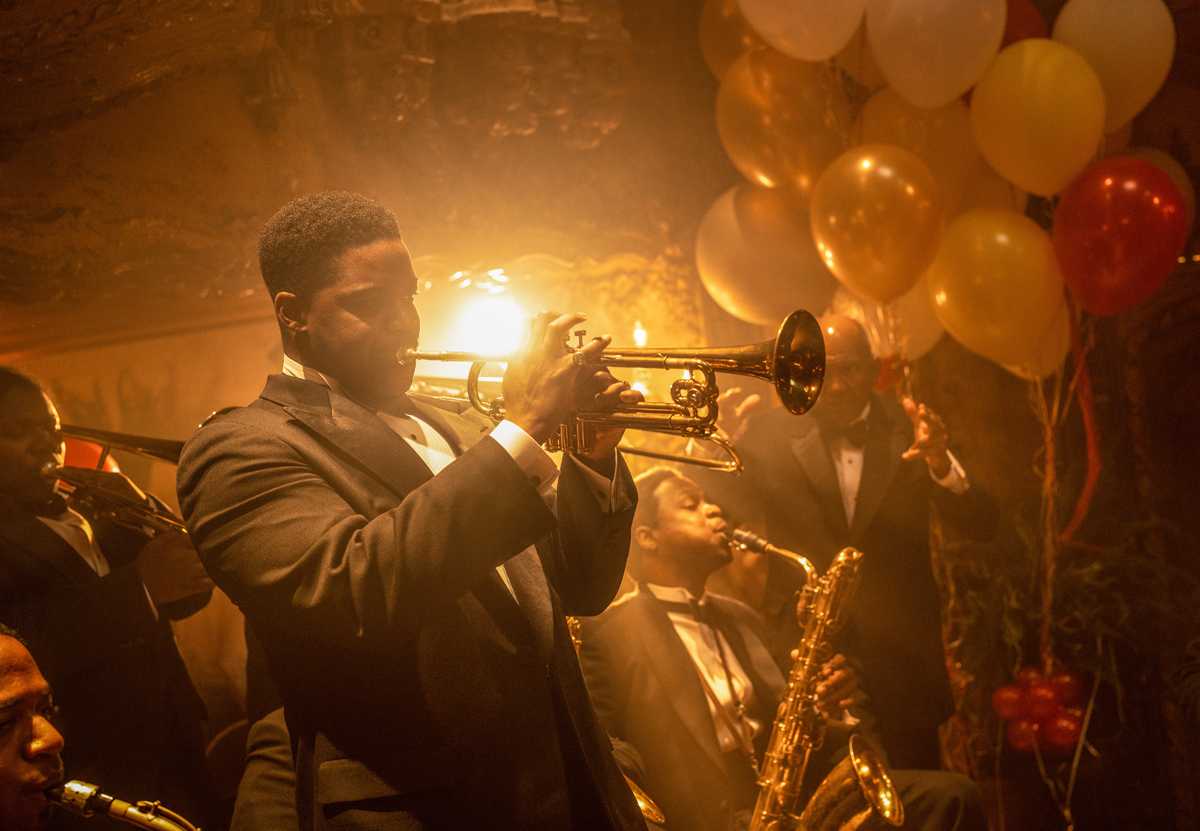 Much of Babylon plays like a parlor game designed to flatter the TCM devotee: guessing who’s who or which movie or scandal is being referenced affords the same empty pleasure as figuring out which Minnelli, Demy, or Donen film Chazelle was saluting in La La Land, his wan 2016 musical. When Nellie, now a huge star hailed as “the Firecracker from New Jersey” (one of Clara Bow’s sobriquets was “the Brooklyn Bonfire”), steps on a soundstage in 1928 to make her first talkie, it’s evident that Chazelle is summoning The Wild Party, Bow’s debut sound film from 1929. To demonstrate the snafus and glitches still being worked out as actors, directors, and technicians made the adjustment to this new dimension, Chazelle subjects us to eight takes of the same scene—at least five too many—yet another instance of his predilection for deadening excess. 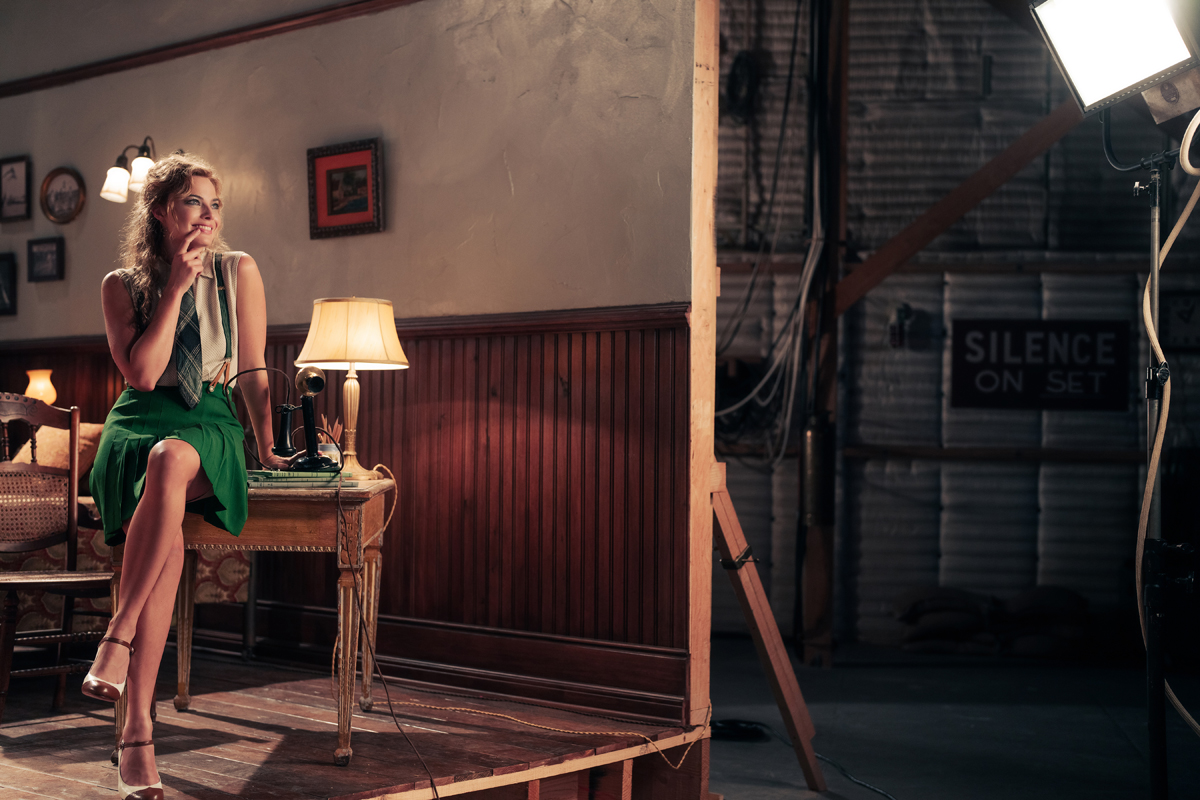 However stupefying, Chazelle’s decision to end the film with a flagrant redundancy is at least of a piece with his pleonastic tendencies. Throughout, Babylon quotes segments from Singin’ in the Rain—the best, most beloved meta-movie to depict cinema’s shift from silence to sound. Yet when Manny, now two decades removed from his Hollywood escapades, takes a seat in an empyreal movie house where that 1952 musical is being shown, Chazelle focuses on the exact moments in the original that his film pinched from. Why? The comparison can only be unflattering. Or perhaps Chazelle thinks his flaccid project will one day assume its place among the exalted ranks of Singin’ in the Rain or one of the other great works—The Passion of Joan of Arc, Psycho, 2001—excerpted in a montage in Babylon’s closing minutes. Those clips are meant to remind us of the “magic of cinema,” to assure us of the imperiled art form’s immortality. Babylon can only hasten its demise.