Angels and insects, and beaucoup de PVC: at the Brooklyn Museum for its final stop, a posthumous retrospective of the over-the-top designer’s exuberant creations. 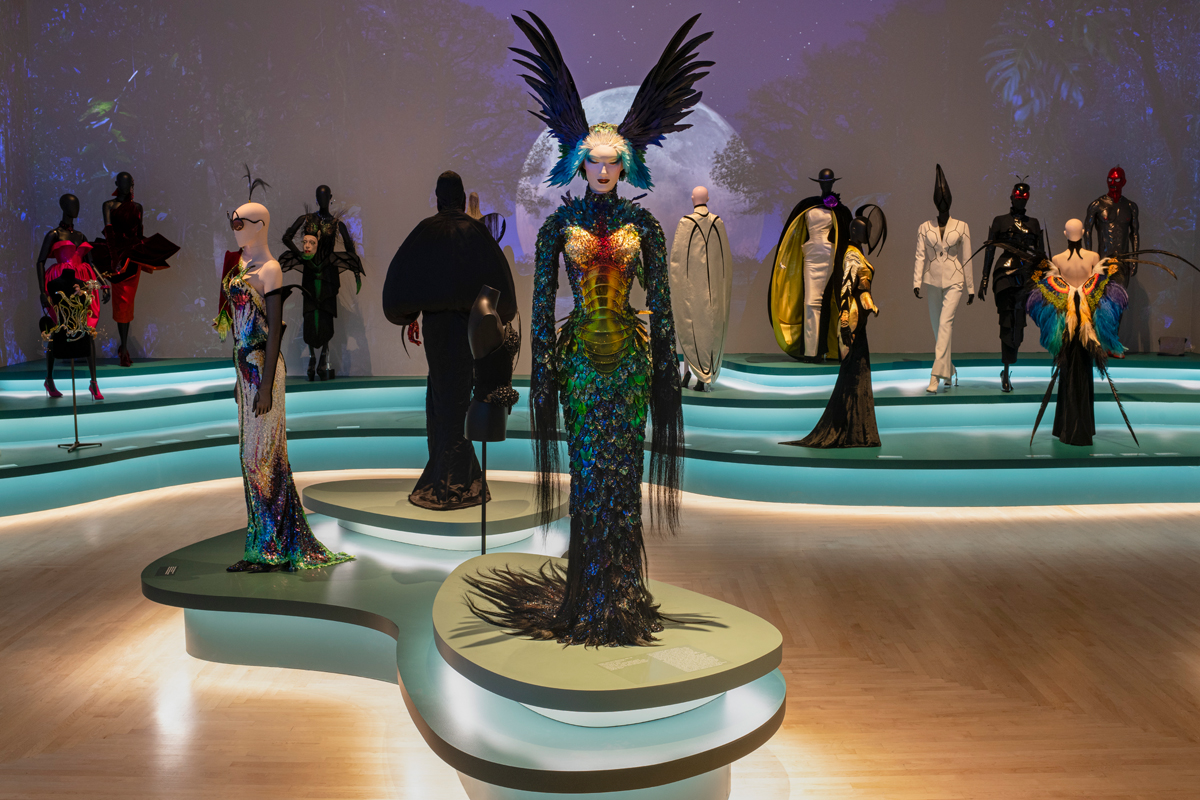 On Christmas Eve, 2021, the French designer Manfred Thierry Mugler posted a clip from his archive on Instagram. Shot in 1984, at the runway show for his tenth-anniversary Hiver des anges (Winter of Angels) collection, the video shows the Virgin Mary—the six-months pregnant model Pat Cleveland—descending from the rafters in a column of smoke, wearing a caped, crystal-adorned, silk chiffon gown and a halo-headdress with bejeweled, icicle-like spikes. In another of the video’s standout catwalk vignettes, a sunray pleated dress of gold lamé with peaked wings for sleeves is worn like crinkled armor by a model with a shaved head. An avenging tree-topper come to life, she takes the ’80s power-suit silhouette to a yuletide/extraterrestrial extreme.

Mugler’s sharing of the footage—a reminder of his never-too-much, generous approach to pageantry—paired with the message, “To all my Angels . . . Merry Xmas !! 🎄🎁,” is particularly touching in retrospect: he died within a month, at the age of seventy-three. 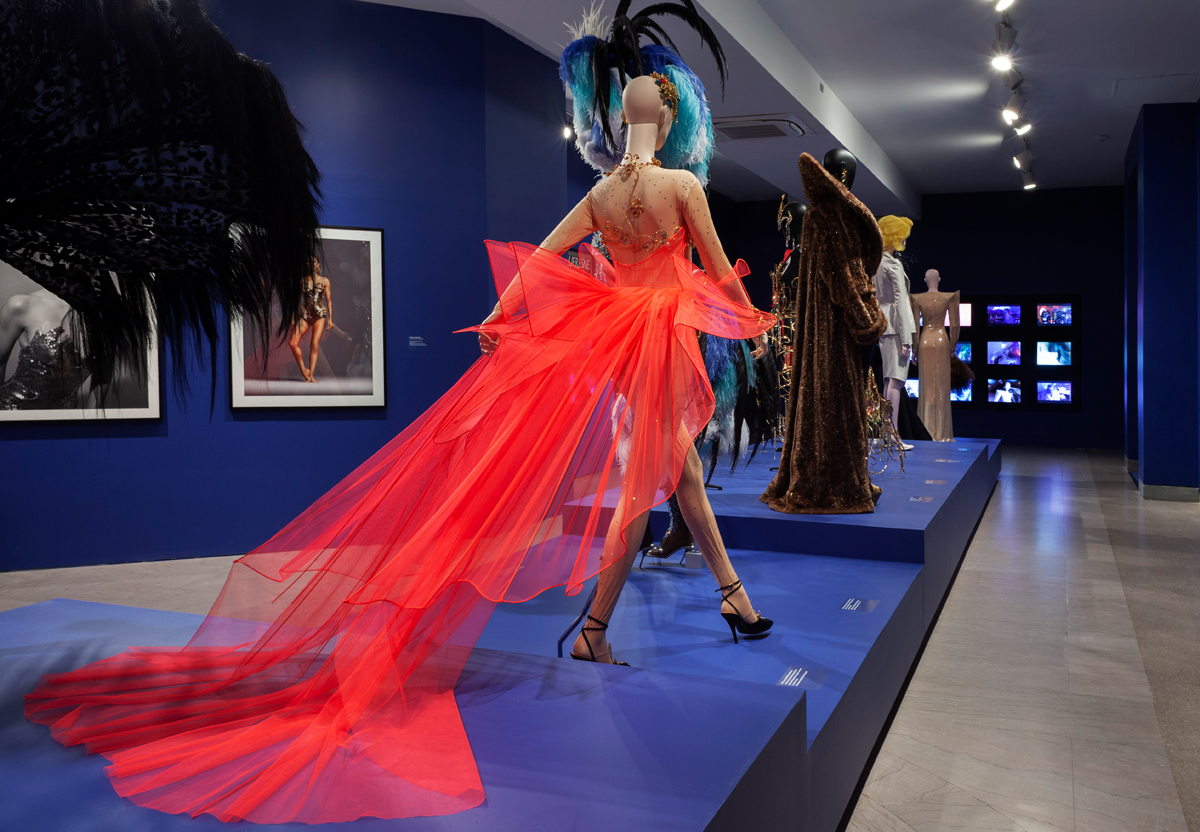 Both of the outfits mentioned above, and other seraphic ensembles from that collection (including a draped acid-green bustier dress with deep-purple feathered wings), are on view in the designer’s epic survey, Couturissime, at the Brooklyn Museum. The show—which, as the press release states, has been seen by a million visitors worldwide so far—originated in Montreal in 2019 before making stops in Rotterdam, Munich, and Paris. This is its final installation and its last Christmas—a chance to see it as a grand Nativity scene, teeming with angels, the life’s work of a visionary who borrowed as much from Ridley Scott as from the Italian Renaissance, from fetish wear as from vestments, for his otherworldly looks. 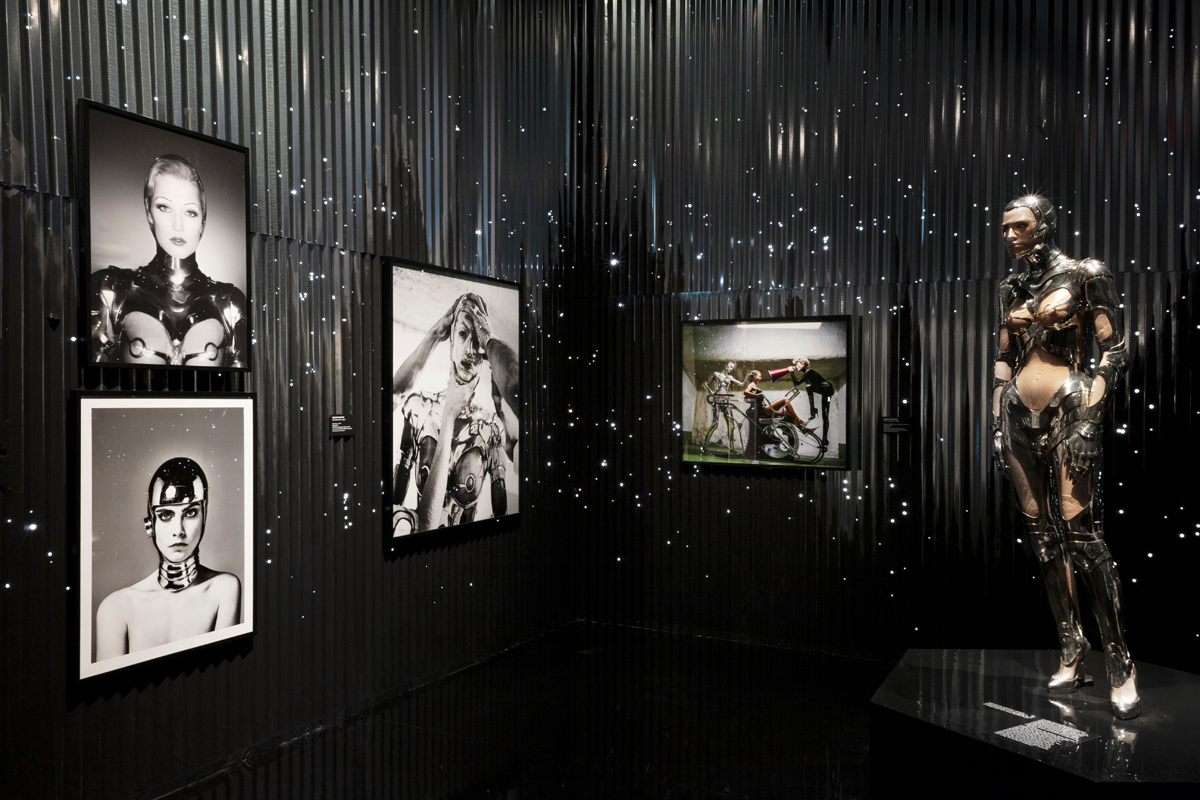 Mugler had been coaxed into the project with the promise that Couturissime would not be a traditional retrospective, which likely explains some of the exhibition’s idiosyncrasies—most notably, its nonchronological presentation. Mugler’s career-spanning recycling of forms and motifs contributes to a mild sense of confusion as to how exactly things unfolded. There is considerable crossover between ostensibly distinct categories such as glamazon and fembot or angel and insect. In particular, his preference for an exceptionally exaggerated, wasp-waisted, shoulder-padded physique is a common trait across collections—and decades. 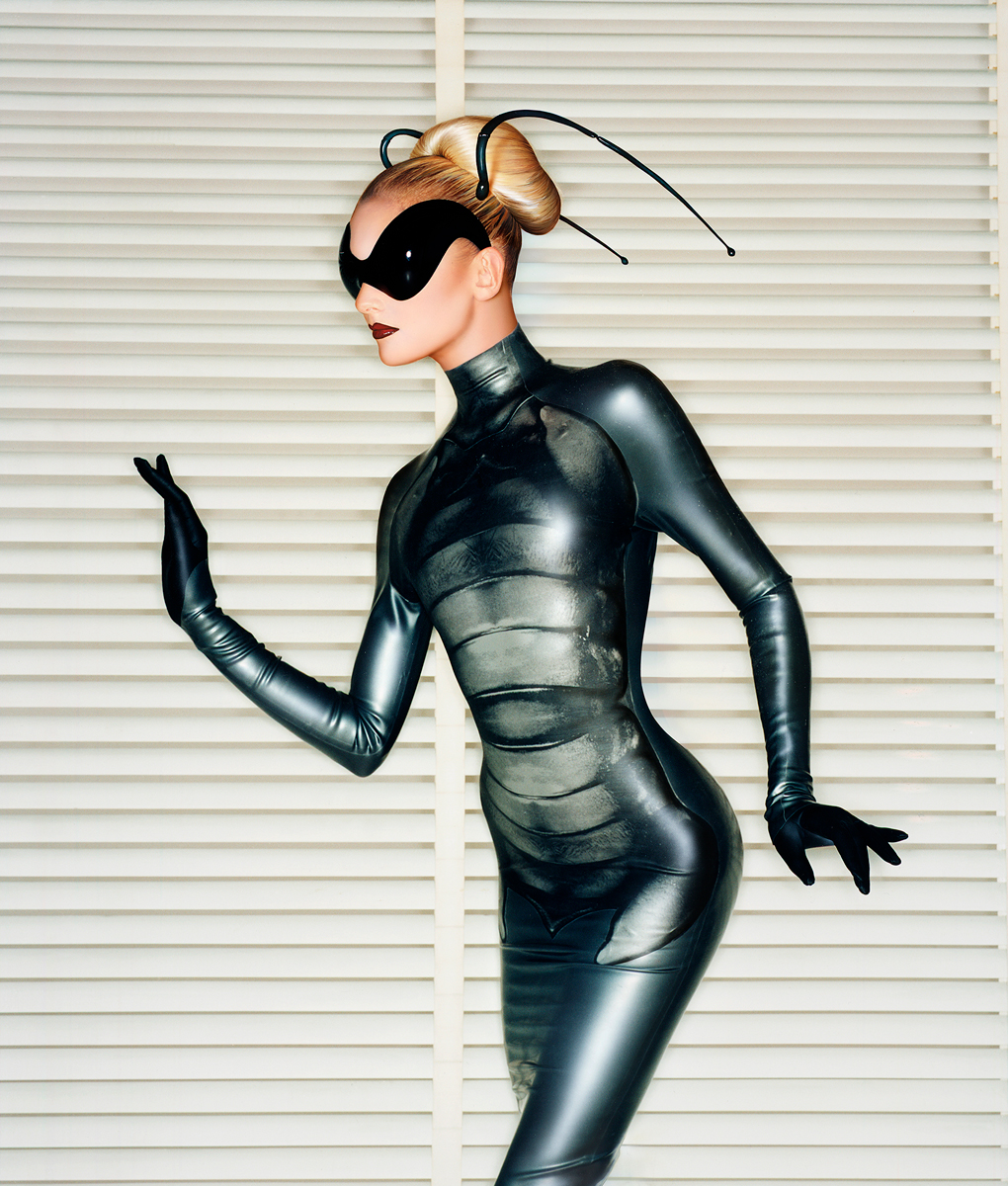 Unlike the subjects of other wonderful, sprawling costume exhibitions presented by the museum recently (Pierre Cardin in 2019 and Christian Dior last year)—French couturiers who worked in elegantly wearable as well as spectacular modes—Mugler, who deemed PVC a classic fabric, was over the top, all the time. So maybe this, coupled with the show’s size, is disorienting, too: a viewer’s sensitivity to nuance (and ability to grasp dates given on labels) may be dulled by the deluge of aggressive ensembles—the more than one hundred exquisite examples of Mugler’s hyperbole and pastiche. 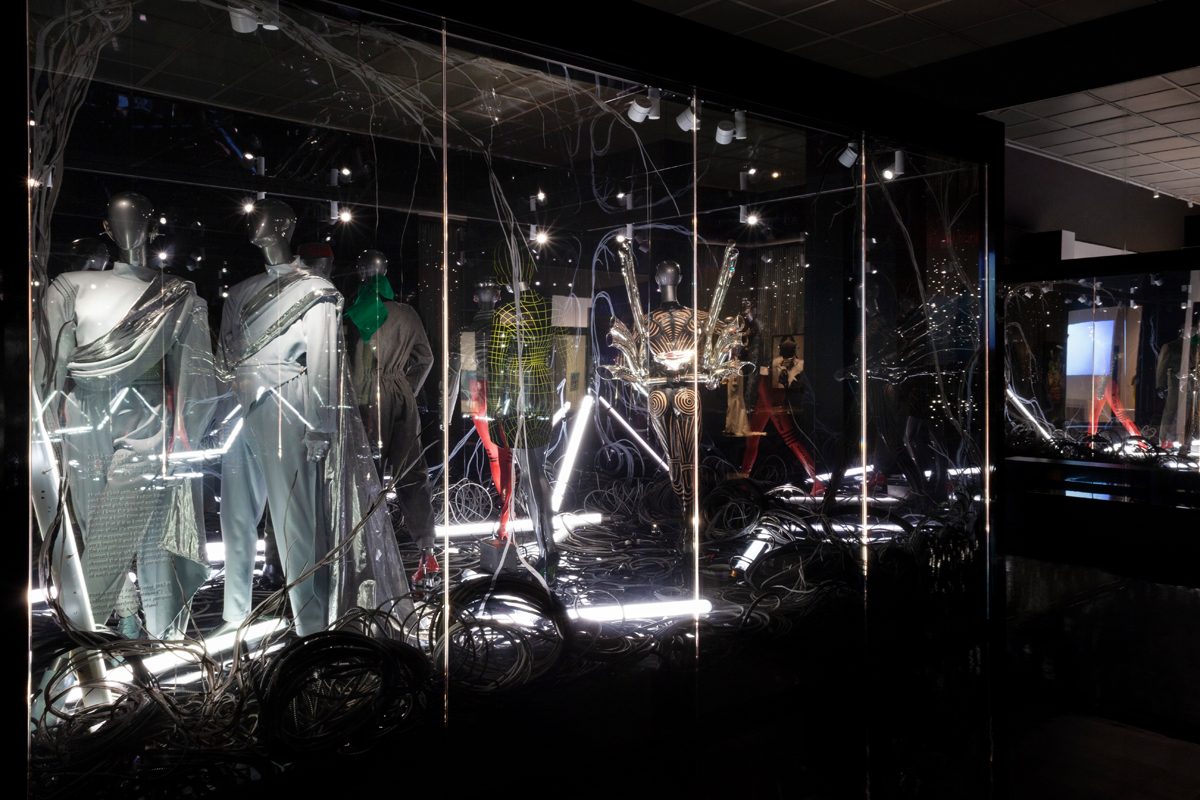 That said, it was only because I planned to write about the exhibition that I concerned myself with establishing a linear progression and so could not fully surrender to the nonstop parade of seductions. Anyway, wall text provides a clear time line of his life for visitors who wish to refer to it, and a careful, varied exhibition design does break things up. Sections devoted to images by a host of fashion photographers (most prominently Helmut Newton and Mugler himself) as well as vitrines of sketches and perfume bottles provide moments of rest. Dramatic shifts in ambience—from light to dark to a large-scale projection of George Michael’s 1992 “Too Funky” video, featuring supermodels and drag-performance artists wearing the designer’s fashions—lend structure to the anti-narrative. There are also enjoyable moving-image murals of forests and underwater scenes. 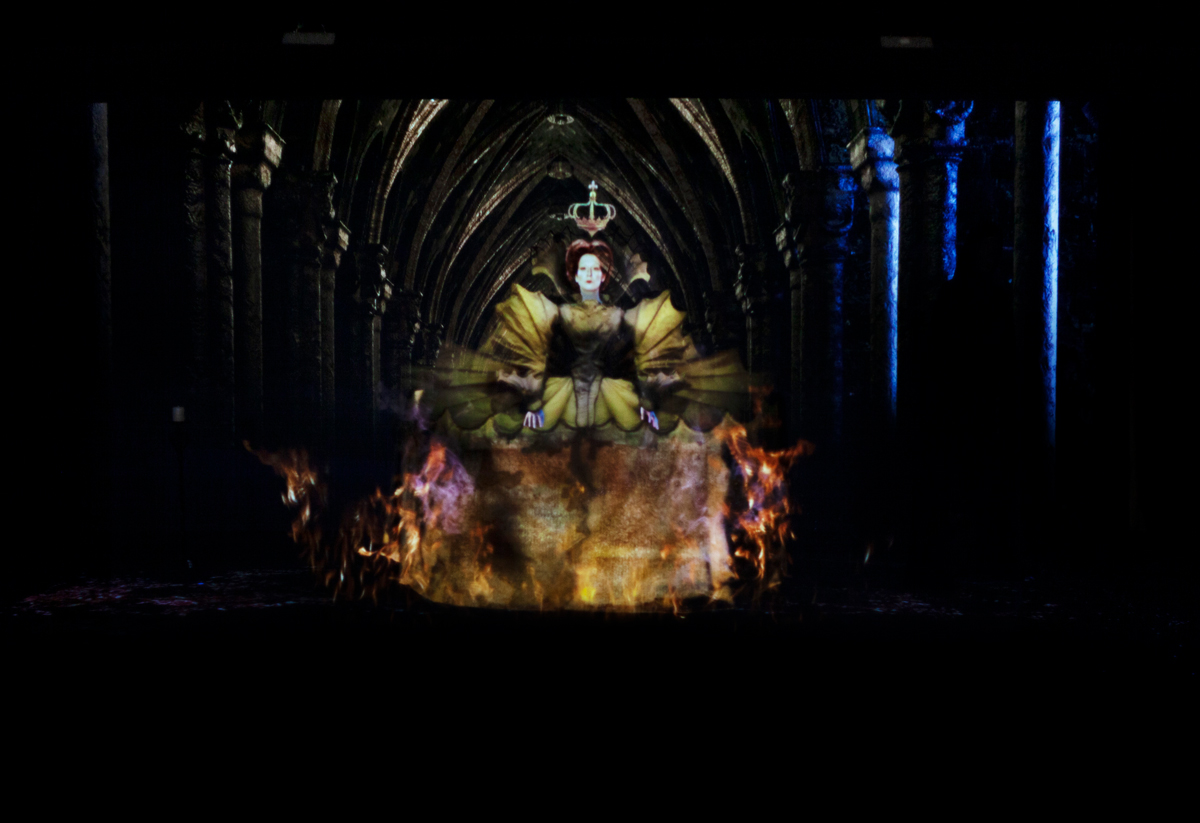 Mugler sold his brand in 1997 to Clarins, including his fragrance line, which was founded on the iconic, influential praline-and-patchouli scent Angel. By 2002 he stepped away from the industry entirely to focus on theatrical work, a long-standing interest. (Couturissime offers a few examples of this, opening with a holographic representation, by artist Michel Lemieux, of a dress—a burning, disintegrating golden cage—Mugler created for the character of Lady Macbeth in a 1985 production by the Comédie-Française.) He returned to the limelight as a celebrity fashion designer in the last decade or so, largely due to the attention of Beyoncé, who took notice of his work in the Metropolitan Museum’s 2008 Superheroes show. She wore the Hiver des anges tree-topper dress and commissioned a suite of related, mostly gold costumes—winged, exoskeletal- or automotive-inspired leotard-type garments—for her Sasha Fierce performances. 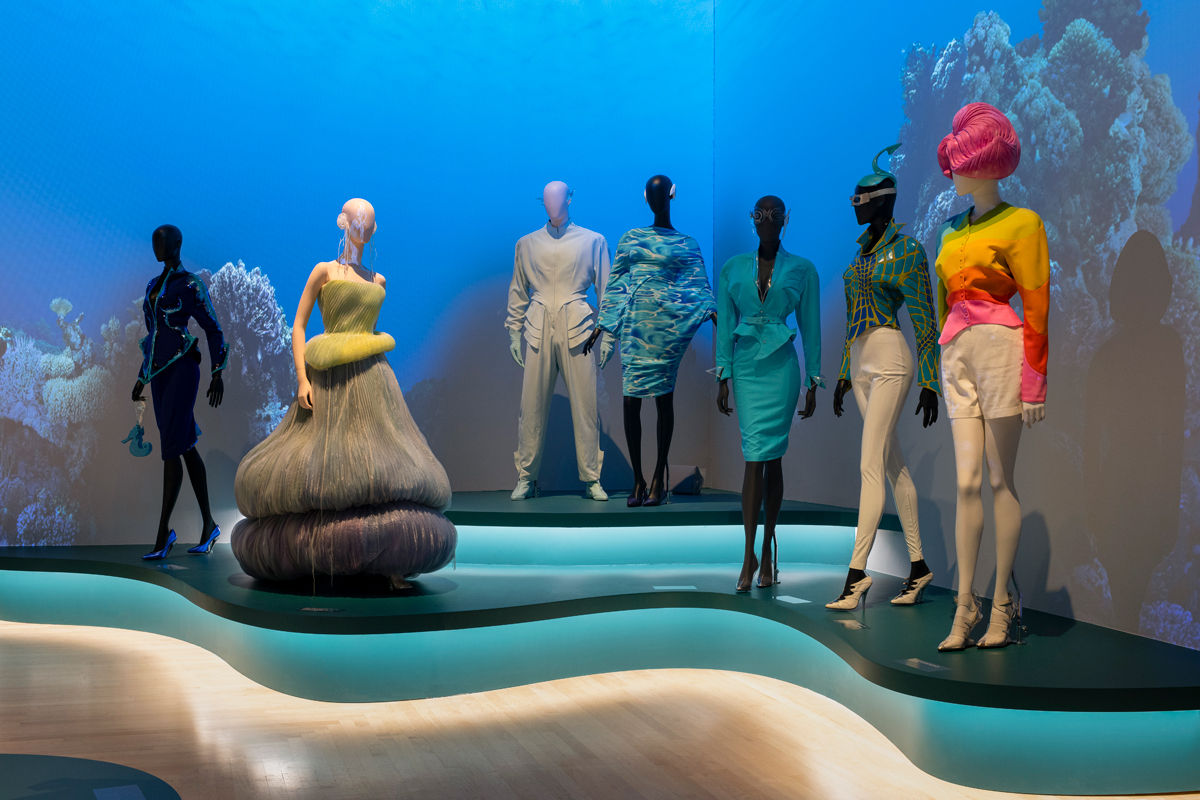 Other high-profile moments for Mugler’s historic pieces include Cardi B’s 2019 Grammy appearance in a 1995–96 gown—a 3D Botticellian Birth of Venus, which represents the mythic scallop shell as an inverted mermaid skirt. While beautifully crafted and clever, here, its ingenuity pales beside Mugler’s other experiments in capturing nature’s metamorphic flux. Amid the Maleficent and Cruella de Vil styles, the dominatrix geometries, and the slick surfaces, there are passages of delicate iridescence, layered translucence, and suggestions of undulating movement. For his “Méduse de bal” gown, from fall/winter 1999–2000, a jellyfish form, composed of a pleated organza bodice and double crinoline, seems ready to float away—truly angelic, free of camp or postmodernist irony. 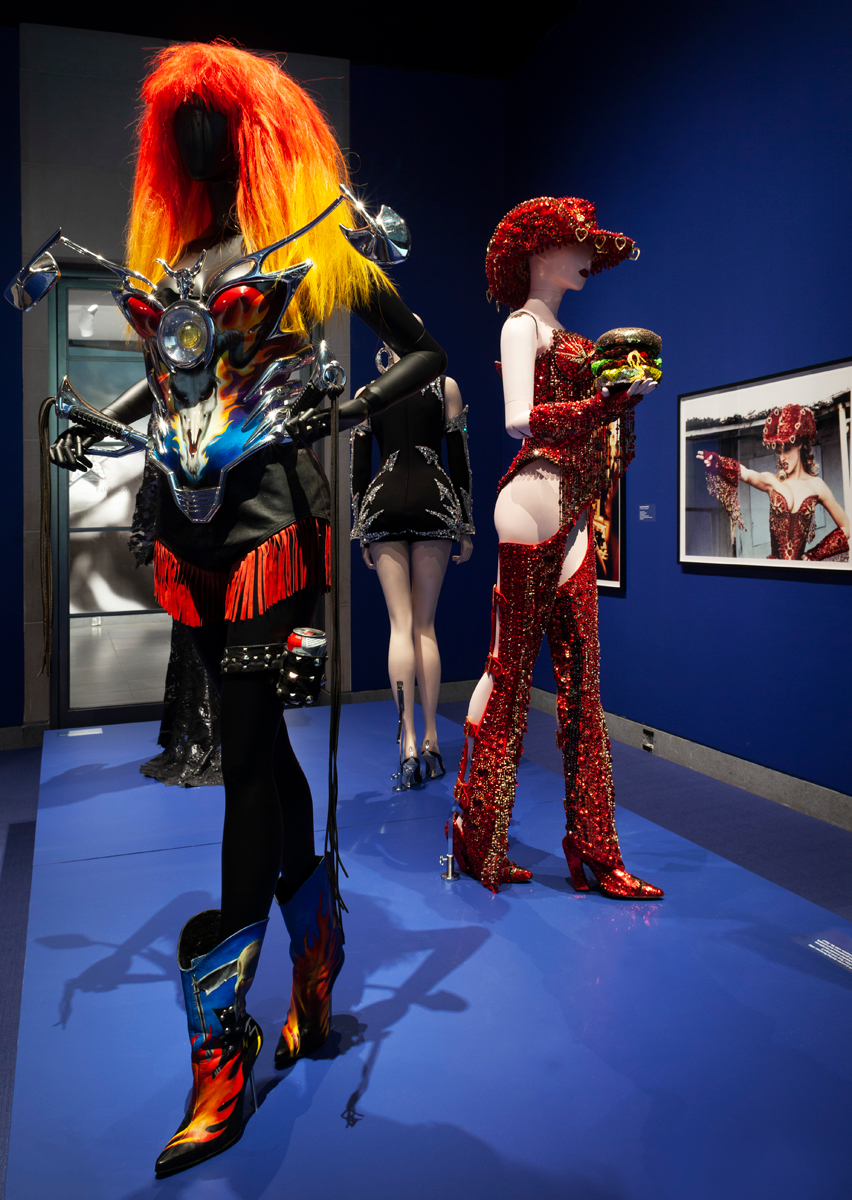 Mugler’s politics of artifice—his understanding of his oeuvre as a symbolic rebalancing of power—is reflected in the epigraph at the exhibition’s entry: “In my work I’ve always tried to make people look stronger than they really are.” In his vision of gender and sexual control, of “empowerment,” though—in his futuristic “fembot” works especially, which derive from Fritz Lang’s Maschinenmensch trope and recall the mechanized sex mannequins of H. R. Giger’s sci-fi dystopias—it’s possible, or inevitable, to see a less than progressive fantasy. Yet Mugler’s Plexiglas or corseted catsuits, chrome bustiers with handlebars, and hinged medieval-bionic armor with butt-cheek cutouts are different—more punk than puerile. In his drag-informed aesthetics, femme-supremacist fabulousness counters the Giger gaze. And Mugler’s own public physical metamorphosis (from his professional-ballet-dancing youth to his latter-day Tom of Finland daddy look) provides illuminating context for his beyond body-con, anatomically untenable, proto-Kardashian—and then custom-Kardashian—fantasy concepts. (Mugler’s best-known creation for Kim may be the illusionistic beaded latex “wet look” gown that she wore to the 2019 “Camp: Notes on Fashion” Met Gala.) 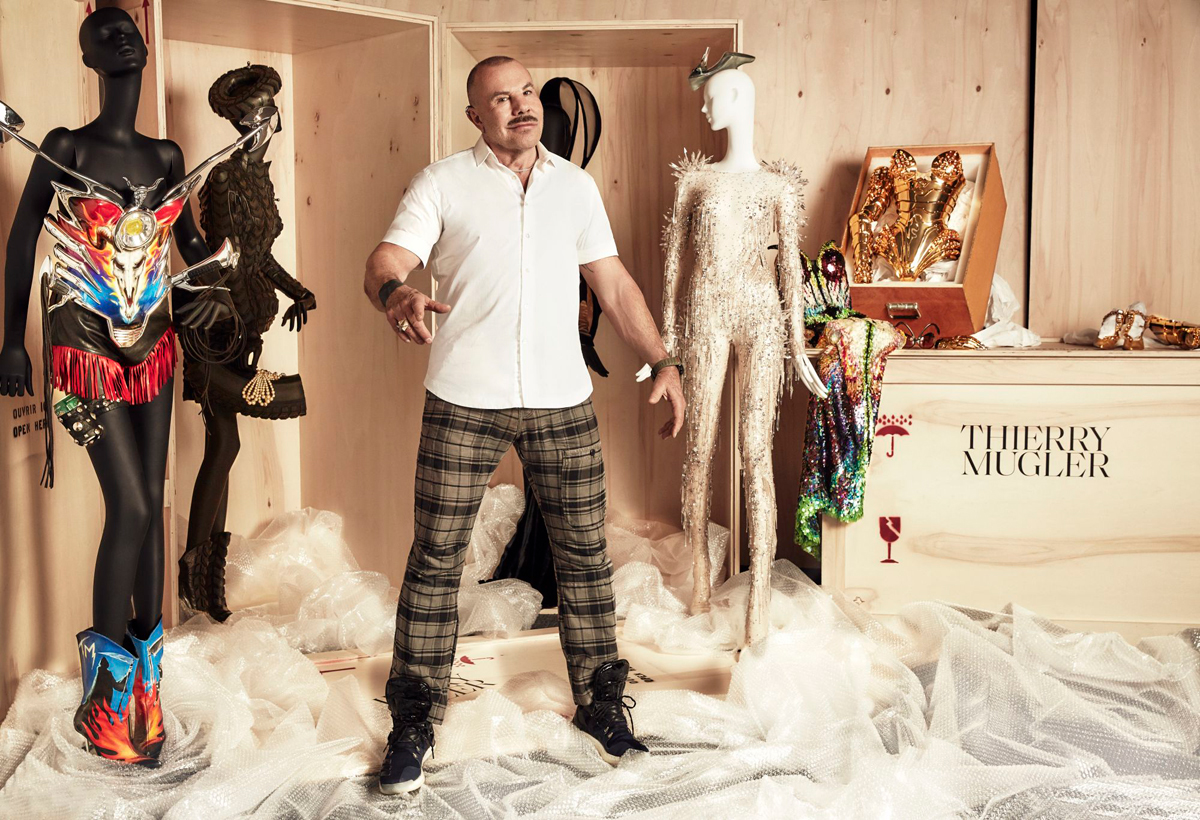 If there’s chilly objectification on view here—in costume surveys and in the world of high fashion, perhaps there always is—it’s subsumed by a humanizing warmth and humor: in the face of AIDS-era homophobic moralism, rampant at the height of his career, the fun-loving Mugler was unapologetically, exuberantly queer. Couturissime, then, is transporting, edifying fun for the whole family during this most wonderful time of the year. ’Tis the season of twinkling crystals, decorative excess, and angels. For Mugler, every season was.

Johanna Fateman is a writer, art critic, and musician. She writes art reviews regularly for the New Yorker and is a contributing editor for Artforum. Her band, Le Tigre, has reunited after seventeen years to tour in 2023.