Before I begin a proper review of Bergman Island, Mia Hansen-Løve’s meta-experiment about a female filmmaker in which fact and fiction are refracted and outsize legends reflected upon, I feel I must dispense with some basic information about the place that gives her film its title—a place where, in August 2019, I spent a transcendent thirty-six hours. Ingmar Bergman first traveled to Fårö, a tiny Swedish island in the Baltic Sea, to scout locations for his 1961 movie, Through a Glass Darkly. He was immediately besotted. “I don’t really know what happened. If one wished to be solemn, it could be said that I had found my landscape, my real home; if one wished to be funny, one could talk about love at first sight,” he writes in his autobiography The Magic Lantern. He returned there in the summer of 1965 to shoot Persona, his superb film of erotic attachment and betrayal starring Bibi Andersson and Liv Ullmann; a year later, construction began on the house in Fårö that would be his main residence until his death in 2007. He would make several more movies on the island, including 1973’s Scenes from a Marriage.

Those who lived with the totemic auteur, whether full-time or not, have different recollections of the remote place where Bergman reveled in “self-imposed solitude.” Ullmann, who began a tumultuous, roughly five-year relationship with the director while they were making Persona, details the miseries of cohabitating with Bergman in Fårö in Changing (1977), the first of her two autobiographies. Their daughter, the Norwegian writer Linn Ullmann, recounts the often awkward summertime visits she had as a child with her father on the island, surrounded by many of her half-siblings—Bergman had nine kids with six women, five of whom were his wives—in Unquiet, a work first published in English in 2019 that’s labeled a novel but is really a memoir in which her famous parents are never mentioned by name.

In 2010 Linn Ullmann cofounded the Bergman Estate on Fårö, which offers short-term residencies on her father’s compound to artists, writers, scholars, and journalists. Once a guest of the retreat, the French filmmaker Hansen-Løve, an avowed Bergman fan, has set her first English-language feature—and her seventh to date—on this minuscule Scandinavian spot. Her protagonist (or, perhaps more accurately, her surrogate), Chris (Vicky Krieps), has come to Fårö in the summer with her romantic partner and fellow residency invitee, Tony (Tim Roth). Both are filmmakers, though Tony, much older than his girlfriend, is far more successful. After each of them sets up their workspaces—he in the main house, she in the mill twenty or so yards away—Tony immediately dives into his screenplay-in-progress, which he toils on with little anguish and which examines “how invisible things circulate in a couple.” Chris, fountain pen poised tentatively over a blank page, struggles with getting down even a basic outline.

The Chris-Tony dyad shares more than a few similarities with the relationship, since dissolved, that Hansen-Løve had with Olivier Assayas, twenty-six years her senior and one of France’s best-known (and most prolific) directors. Hansen-Løve and Assayas have a daughter, born in 2009; Chris, more so than Tony, worries about their young daughter, left behind in New York in the care of her mother during their Swedish sojourn.

These autobiographical elements do little to vivify a film in which ultimately so little seems at stake and in which so much is drawn in broad strokes. Chris is at once proud and vaguely resentful of Tony’s accomplishments; the Bergman Center screens one of his films to a rapturous crowd. But despite her centrality to Hansen-Løve’s movie, we know little about Chris as an artist. What, for example, were her previous movies about?

Chris’s opacity is compounded by the fact that much of Bergman Island’s dialogue, especially the lines delivered by its principal character, has a flat portentousness, a grating elevation of speech that’s likely the result of Hansen-Løve’s not working in her native tongue. While the British Roth has an easier time aerating some of this stilted text, the Luxembourgish Krieps often sounds as if she is issuing thesis statements, not making casual observations: “Why didn’t he ever once try to explore happiness?” she loftily asks her boyfriend after they’ve watched Cries and Whispers, the Swedish titan’s gutting sororal psychodrama from 1972. (In no way do I mean to suggest that Krieps, with better material, isn’t a marvelous actress in English, as those who recall her breakthrough performance, full of enchanting inflections, in Paul Thomas Anderson’s 2017 Phantom Thread will attest.)

That very query points to another of Bergman Island’s shortcomings: its inability to do much more than recycle age-old mundanities about the Scandi filmmaking colossus. His profligate number of spouses and offspring is mentioned more than once, with Chris wondering, with no small amount of indignation, what a horrible family man Bergman, showing constancy only to making films and directing theater, must have been. Hansen-Løve tries to poke gentle fun at actual events on Fårö, such as the incongruously named “Bergman Safari,” in which a guide points out to a busload of tourists and Ingmar enthusiasts where, exactly, the house seen in Through a Glass Darkly once stood. The scenes fail: Hansen-Løve’s movie perpetuates banalities similar to those of the tacky expedition she’s lightly spoofing.

At roughly its midpoint, Bergman Island stirs to life. Chris begins to narrate to Tony what she’s finally managed to write so far. Her script—about the reunion of Amy, a twentysomething filmmaker, with Joseph, her teenage boyfriend, on Fårö, where a mutual friend’s wedding is taking place—becomes a film-within-the-film, a passionate idyll made all the richer by the presence of the exceptionally appealing, emotionally kinetic performers Mia Wasikowska and Anders Danielsen Lie. But the thrills of this detour, in which it becomes apparent that Amy is some younger iteration of Chris and thus perhaps of Hansen-Løve as well, are short-lived, its momentum interrupted by too frequently returning to Chris and Tony’s dreary story arc. Worse, the magic cast by the Amy-Joseph narrative is instantly dispelled by an ill-considered metafictional segment, in which Chris, waking from a nap, meets the actors playing the characters she’s created. 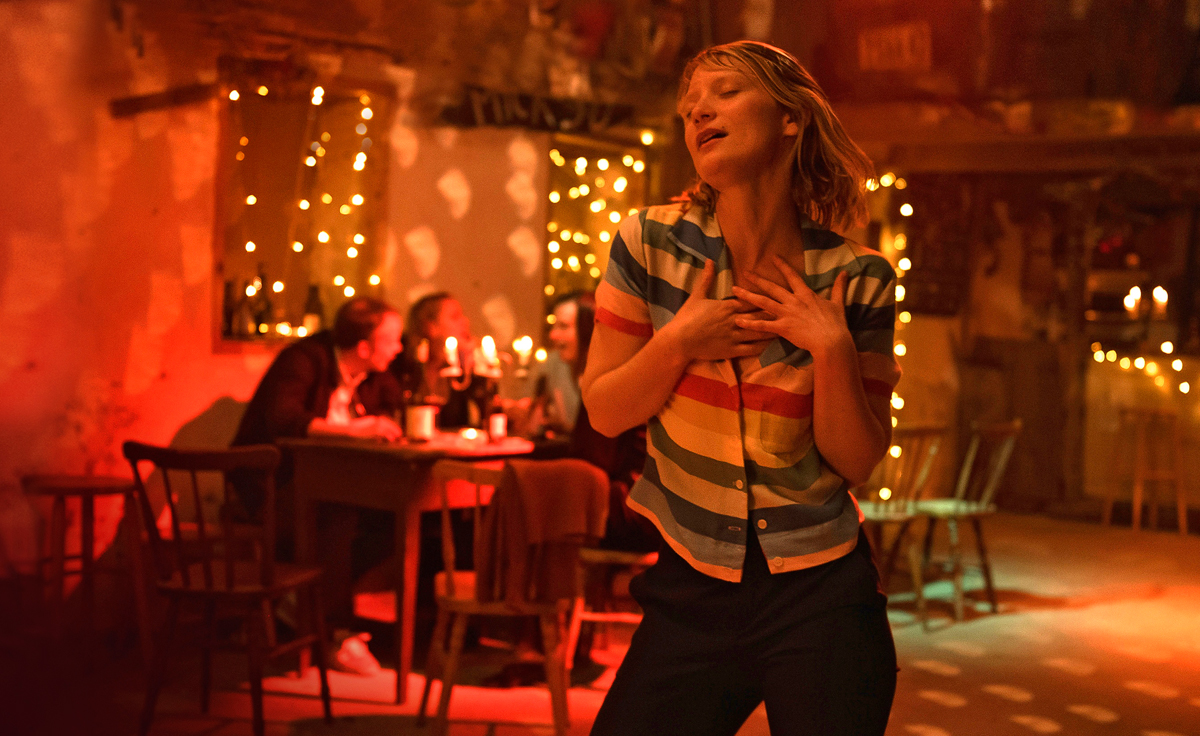 If I have responded coldly to Hansen-Løve’s film, perhaps that’s because the aspects of Bergman’s legacy that seem to so intrigue her—namely, his failures as a father and husband—have never interested me. (Very little about heterosexual life ever does.) Her Fårö is not my Fårö, where during my summer trip two years ago, with my girlfriend and another dyke couple, we made an unguided pilgrimage to the beach where several scenes from Persona were shot. I thought not of marriages, children, or male entitlement. I thought only of Liv and Bibi, playing two women who fall in love and nearly destroy each other on that rocky strip of shore.