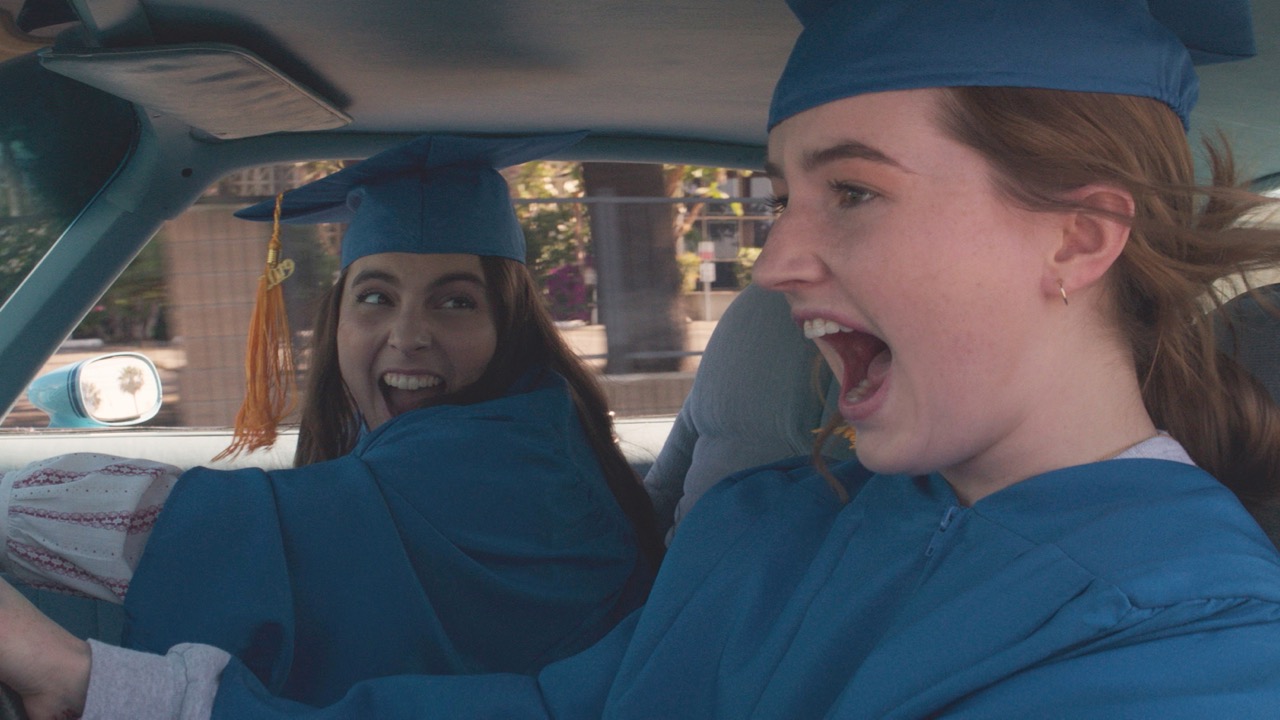 Ungovernable, obnoxious, self-dramatizing, vain, foolish: these are the defining traits of the teenager. The best comedies about American adolescence refuse to sand down the more exasperating qualities of their protagonists. Recall the moronic brio of cosseted sixteen-year-old Beverly Hills resident Cher Horowitz, who pronounces “Haitians” as “Hate-ee-ans” during debate class, in Amy Heckerling’s Clueless (1995), or the title character in Greta Gerwig’s Lady Bird (2017), a Sacramento native who disdainfully announces to her mother that she wants to apply to colleges on the East Coast, “where culture is.”

Heckerling’s film, an arch update of Jane Austen’s Emma, benefited from the director’s weeks of anthropological observation of SoCal teens; Gerwig mined her own adolescence for hers. Rooted in specifics, these movies teem with vivid characters, major and minor, who linger in the mind in part because of their blunders and age-appropriate egotism. Booksmart, a new, hotly anticipated addition to the genre, tracks overachieving, punctilious, and virtuous BFFs Molly (Beanie Feldstein) and Amy (Kaitlyn Dever) over the twenty-four hours preceding their high school graduation ceremony as they try to cram in all the teenage fun they’d forsworn to secure their admission to Ivy League schools. The lead performers exhibit an easy chemistry and an appealing vivacity. But they are given no adversaries, no struggles, no problems; they and their Los Angeles classmates exist in an anodyne, frictionless world. True to its title, Booksmart too often seems dutiful and assiduous, as if its makers had simply followed a manual listing the proper, righteous bromides for the characters to speak. In this time-condensed rumspringa, nothing offensive, troubling, or surprising happens. Some psychoactive drugs are accidentally ingested (leading to a dumb segment of stop-motion animation), a sloppy make-out session happens in a bathroom, the school jock is revealed to also be a Harry Potter fan. It’s a night never to remember. 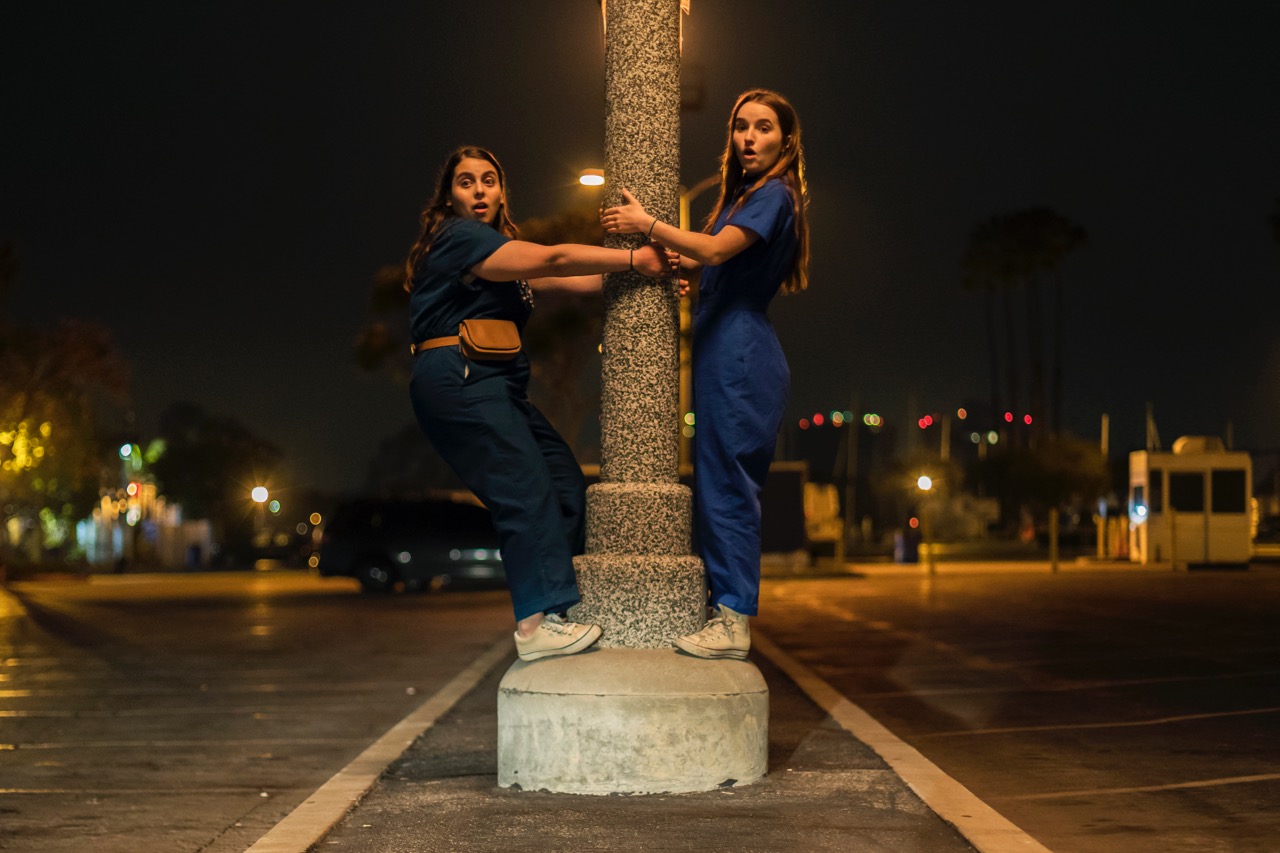 The first feature directed by actress Olivia Wilde, who at the very least livens up the film’s conventional blocking with a few tracking shots and a brief dance fantasia, Booksmart has the cut-and-paste, committee-stamped feel of a movie composed over several different iterations. As discussed in a recent New York Times article, the original Booksmart screenplay, by Emily Halpern and Sarah Haskins, was rewritten by Susanna Fogel, but the project languished. After Wilde was assigned to direct, she hired Katie Silberman to make further tweaks, to hew closer to the pious notion that all members of the Crockett High School class of 2019, not just the two heroines, will be recognized and embraced for who they truly are.

Or, as Molly announces to her classmates during her valedictorian speech, “And I may not have before, but I see you. And you’re all pretty great.” For a film that places so much importance on “feeling seen,” though, Booksmart has a tendency to overlook, elide, or ignore altogether. Amy, who came out in tenth grade but has yet to a kiss a girl, has parents (played by Will Forte and Lisa Kudrow) who are described as staunchly Christian yet are nothing but supportive of their lesbian daughter; mistakenly believing that (straight) Molly and their child are a couple, Mom and Dad merely giggle nervously at any mention of sleepovers. Molly, on the other hand, appears to have raised herself: no parents or siblings or family members of any kind are seen or even mentioned. The sole salient characteristic of her home life is that she resides in a modest two-story apartment complex, yet her more straitened financial circumstances are never remarked on. (As exemplified by Clueless and Lady Bird, enduring US-set teenage comedies are those that pay attention to class distinctions, or additionally, as with Heckerling’s Fast Times at Ridgemont High from 1982, the drudgery of minimum-wage jobs.) 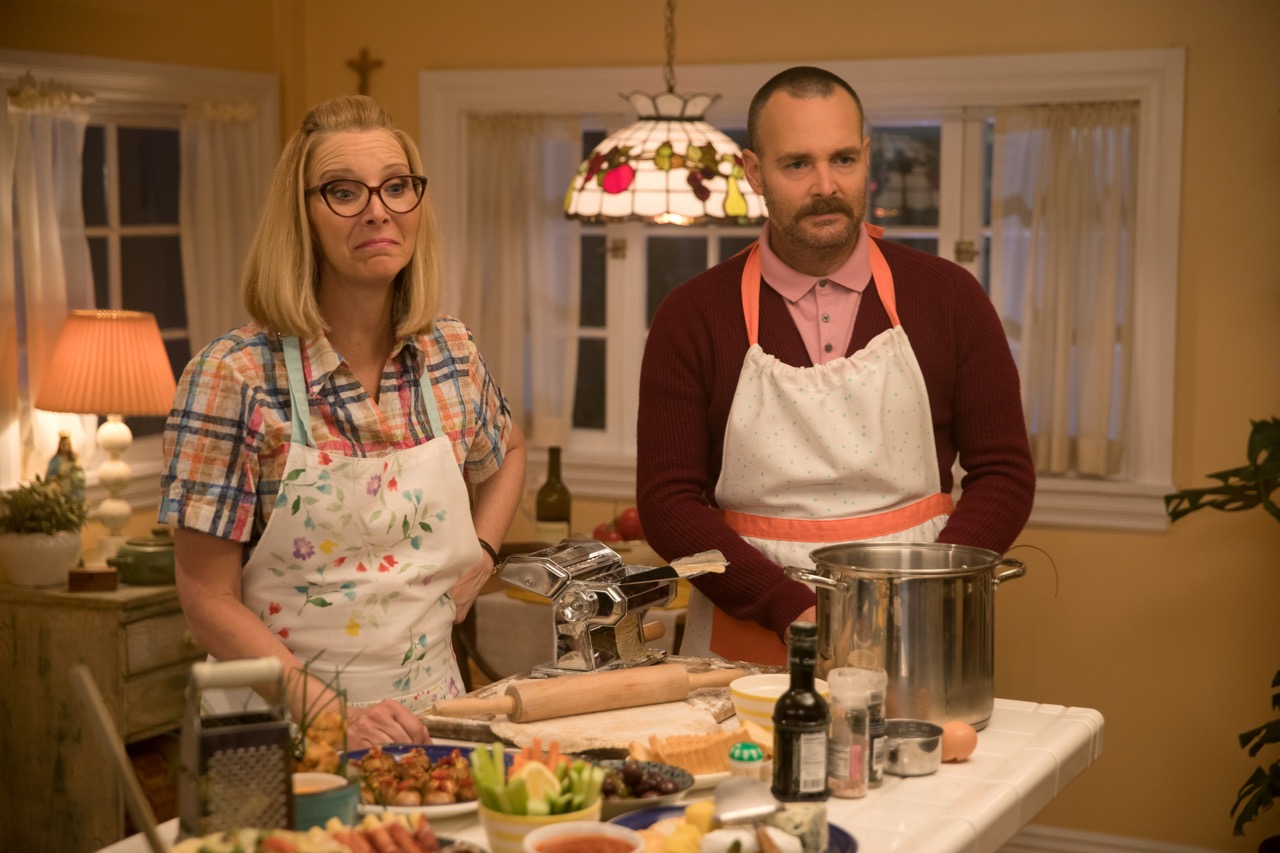 Lisa Kudrow as Charmaine and Will Forte as Doug in Booksmart. Photo: Francois Duhamel. © 2019 Annapurna Pictures, LLC. All rights reserved.

Molly’s bedroom, the first location of Booksmart, is festooned with images of predictable sheroes: Eleanor Roosevelt, Michelle Obama, Ruth Bader Ginsburg. (Yale-bound in the fall, Molly hopes to become the youngest person ever to be appointed to the Supreme Court.) Amy’s interior decorating leans more toward innocuous mottos like TIME’S UP and MY BODY, MY CHOICE. (On my second viewing of the film, I noticed, tucked in the corner of Amy’s room, a poster about Palestinian liberation that is partially, and no doubt deliberately, obscured so that it reads only as FREE PALES–.)

The besties do their own share of sloganeering. “We will persist!” class president Molly harrumphs to the principal (Jason Sudeikis) after he slowly closes the door in response to her demand for end-of-the-year-budget numbers. As the two friends discuss Amy’s anguish over not knowing whether Ryan (Victoria Ruesga), the skater girl she’s infatuated with, is gay, the young sapphist is quick to correct her heterosexual confidante when Molly presumes that the crush’s predilection for masculine attire confirms her dykedom: “That’s her gender performance, not her sexual orientation.” The words grate as contrived pedagogy, a line of dialogue generated by an adult screenwriter eager to show off a passing familiarity with topics explored in Teen Vogue. 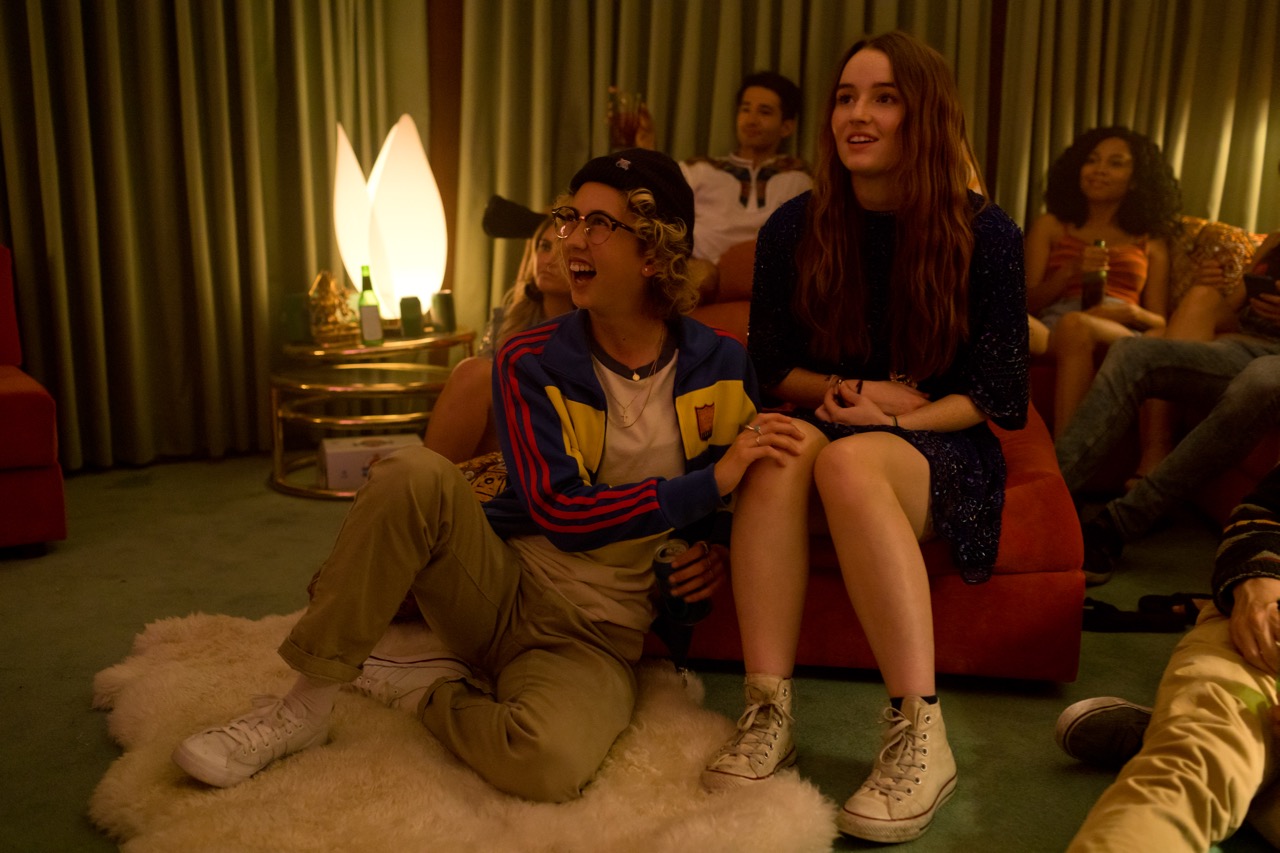 Amy’s rebuke, swift yet gentle, stands as one of the few moments of dissension in a film about a time of life shaped by operatic rancor and tightly regulated caste systems. Molly may imagine that she (and Amy) are ostracized by her peers—she begins her day with a motivational audiotape that exhorts, “Stand at the top of the mountain of your success and look down at everyone who’s ever doubted you”—but the gravest insult she endures, overheard while she’s in a stall in the school’s all-gender bathroom, is “Her vag is stuffed with diplomas.” Not much of a sick burn. 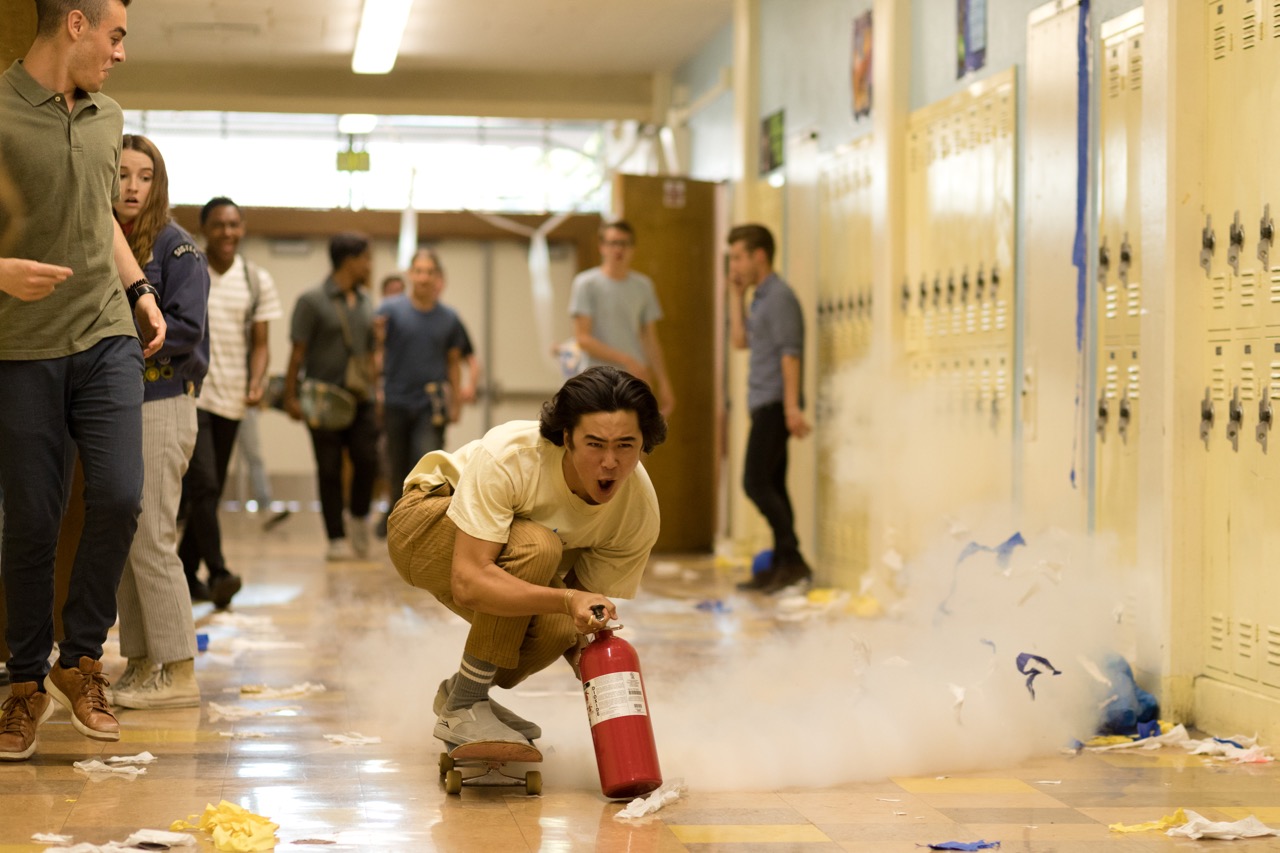 Rubber-faced and razor-sharp in her timing, Feldstein is a delight to watch, even in a film as wearisome as Booksmart. But her presence also, however indirectly, further highlights the movie’s shortcomings. The actress’s breakthrough role was in Lady Bird, in which she played the eponymous character’s best pal, their dyad shaded in with true-to-life tensions and discord. Additionally, Feldstein is the younger sister of Jonah Hill, who, twelve years ago, costarred with Michael Cera in Superbad, a coming-of-age comedy with a template—the last day of high school, the byzantine odyssey to get to a rager that the protagonists are certain will be life-changing—that Booksmart largely follows, with one major exception. The boys, basically decent and sweet, are still on occasion crass, piggy, incompetent—qualities that are the inalienable rights of teenagers of any gender but are denied the heroines of Booksmart, a film of hollow political posturing, an ultimately conservative project that ends up flattering no one.