Too many oddities in one space: a new David Bowie documentary
by Brett Morgen. 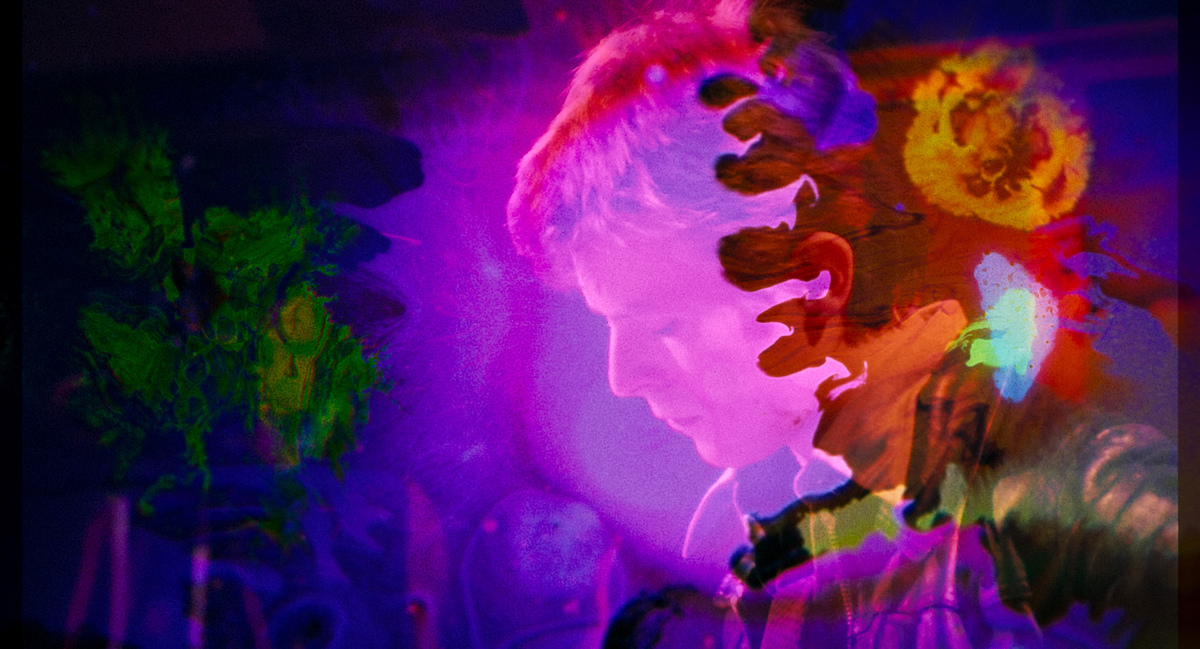 Brett Morgen’s David Bowie documentary, the first film about the singer made with the approval of his estate, takes its title from a track on The Rise and Fall of Ziggy Stardust and the Spiders from Mars, the 1972 album that introduced one of the most enduring alter egos of an especially protean performer. The song sums up its creator’s flamboyant multitudes: “I’m an alligator / I’m a mama-papa coming for you / I’m the space invader / I’ll be a rock ’n’ rollin’ bitch for you.”

Tracing Bowie from cradle to coffin but focused primarily on ’73 to ’83, the most fertile decade of the musician’s career, during which he seemed to shape-shift every year or so, Morgen’s portrait aims but fails to replicate what those lyrics deftly provide: a sense of outlandish elements constituting a coherent whole. Assembling clips mainly from previous docs about Bowie, the narrative features he starred in (projects like Nicolas Roeg’s The Man Who Fell to Earth from ’76, which capitalized on DB’s outré pop-icon status), chat-show appearances, and music videos, Morgen—who also edited Moonage Daydream—made the perplexing decision to trick out this already dynamite, sensorially stimulating material. Among other incongruous distractions, Moonage Daydream is littered with snippets from Metropolis, The Wizard of Oz, 2001: A Space Odyssey, and scores of other movies; animation; and a scrotal-looking planet visited by a gamine with a tail, a vision that induces moonage night terrors. (Morgen, whose breakthrough film was 2002’s The Kid Stays in the Picture, an obsequious doc about overweening movie producer Robert Evans, deployed a similar nonsensical mix-and-match strategy in 2007’s Chicago Ten, an inept chronicle of the ’69 conspiracy trial brought against Abbie Hoffman and his countercultural confrères.) 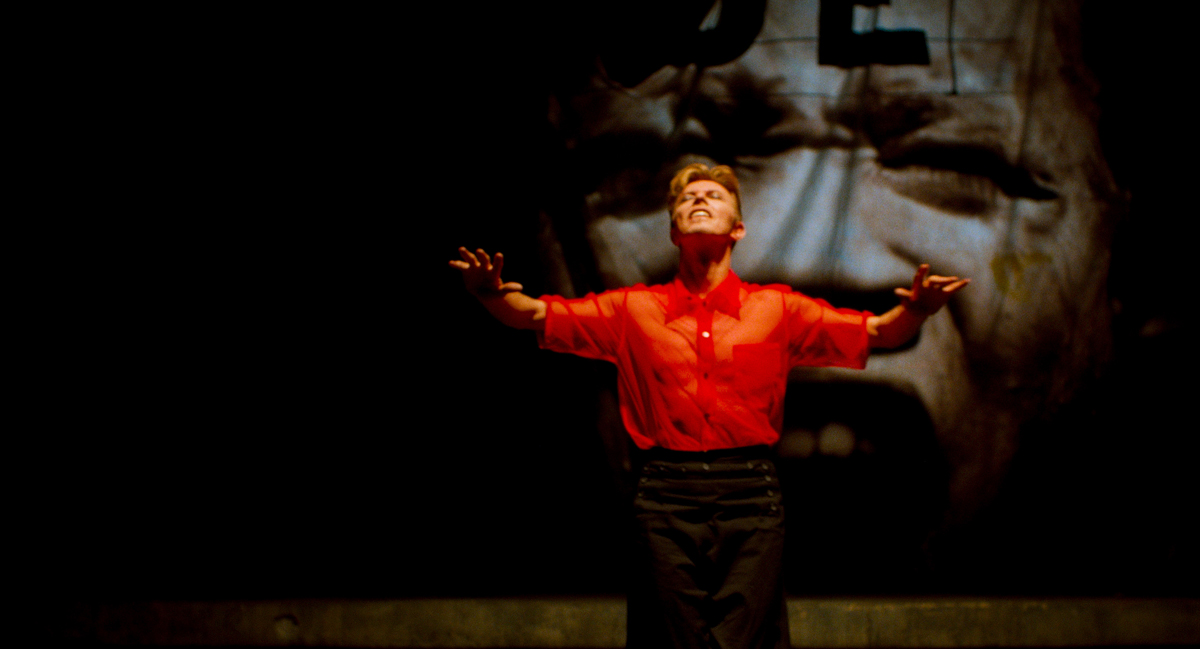 Moonage Daydream is the second feature-length film about Bowie released since his death, at age sixty-nine, in 2016; it follows Gabriel Range’s witless 2020 docudrama Stardust, which charts the dreary year in the chameleon’s life that eventually culminated in the creation of Ziggy Stardust and his ascendance to glam-rock godhead. Vastly different projects (not least in terms of budget and access) in distinct idioms, Stardust and Moonage Daydream nonetheless share grandiose definitions. Range described his movie as “a work of speculative fiction,” one animated by “the interior journey David Bowie might have taken to become [an] artist.” That language is mirrored in the promo copy for Morgen’s documentary, which calls itself an “experiential cinematic odyssey explor[ing] David Bowie’s creative, musical and spiritual journey.” 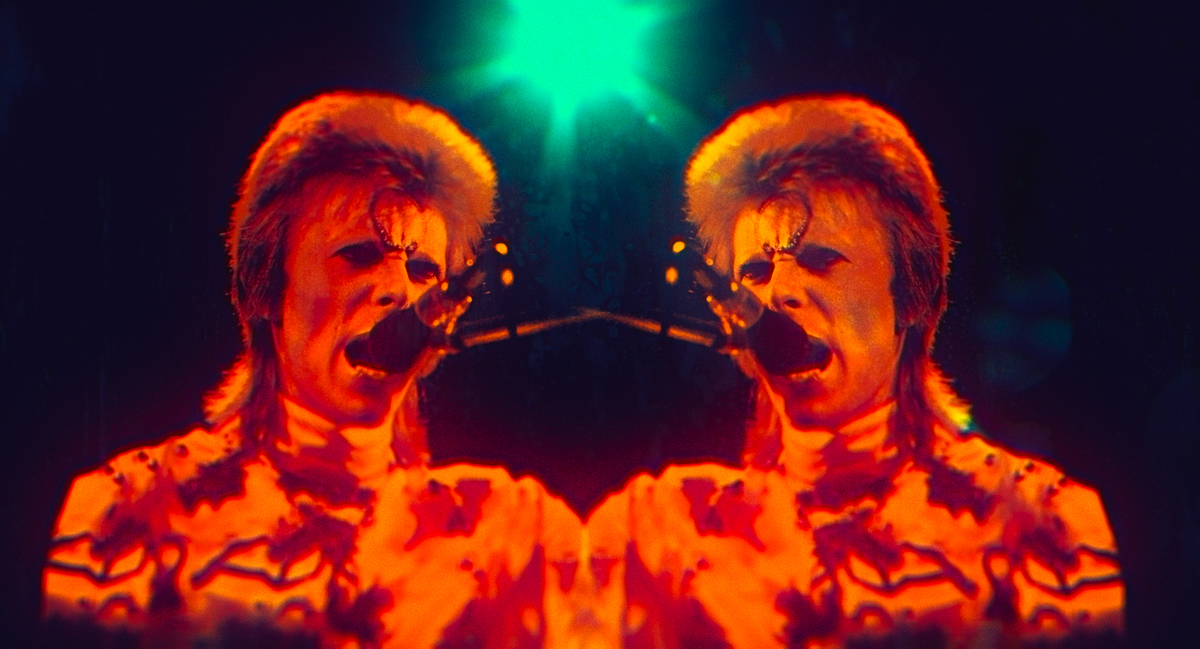 So many journeys, so little distance traveled. Structured via previously shot material, Moonage Daydream recalls to some extent Asif Kapadia’s Amy, his 2015 chronicle of Amy Winehouse, which relies exclusively on archival images to recount the too-short life of the British neo-soul powerhouse. Yet Kapadia’s film, enhanced by a wealth of home videos of the singer years before her stardom and in private moments following her fame, offers an intimate, raw encounter with its subject. And although they never appear onscreen, those closest to Winehouse, whether personally or professionally, provide a running commentary, their words adding more context to her artistic triumphs and behind-the-scenes anguish. Moonage Daydream, in contrast, features only Bowie’s musings as the voice-over, his reflections skewing toward the impersonal and the quasi-philosophical (“Time, that most complex of concepts”). While Morgen’s dizzying salmagundi does include archival deep cuts, Moonage Daydream heavily excerpts two of the best Bowie portraits from the ’70s—D. A. Pennebaker’s pulsating concert documentary Ziggy Stardust and the Spiders from Mars, a record of the strawberry-mulleted intergalactic messiah’s final appearance, in London in ’73; and Alan Yentob’s Cracked Actor (1975), an installment of a BBC arts series that captures a cadaverous Bowie during his ’74 “Diamond Dogs” tour in North America—material that will already be familiar to even the most casual DB fan. 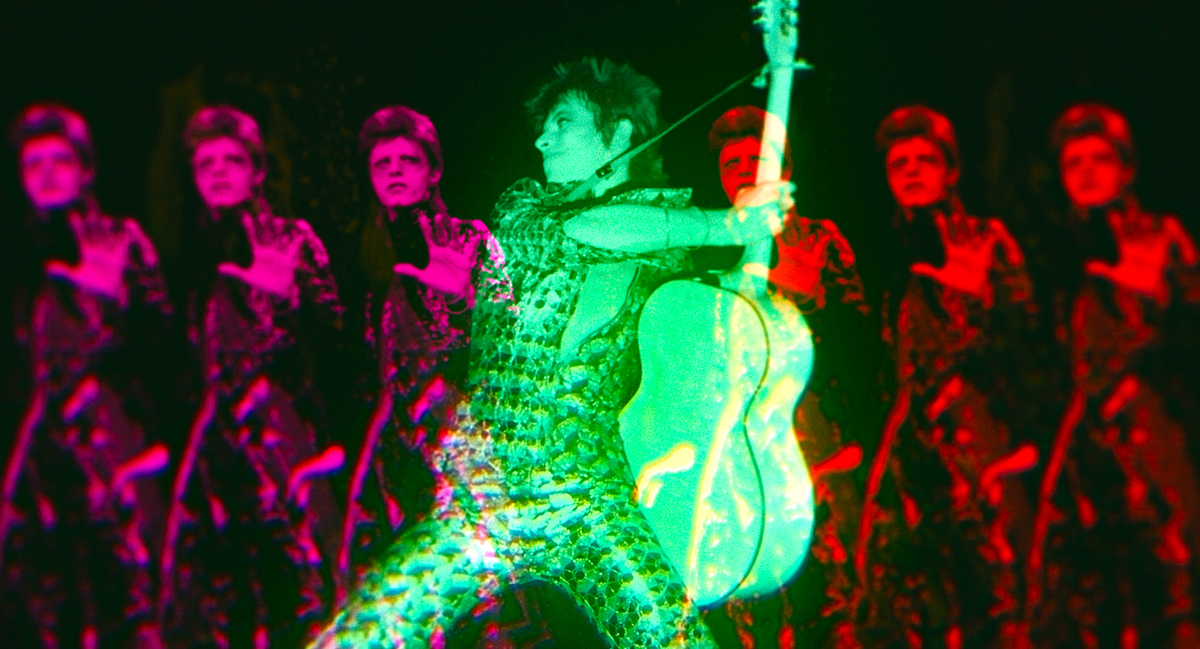 But both the long-standing aficionado well acquainted with much of what Morgen has assembled and the remotely Bowie-curious spectator will endure the same frustration: of being denied the pleasure of witnessing a performance of a song played in its entirety (in this 140-minute film, I recall only “Heroes” being heard from start to finish). Morgen too often indulges his aggravating instinct to cut away too soon from his captivating subject only to bombard us with enervating frippery: he interrupts “All the Young Dudes,” for instance, to present a still image of Bowie rendered in lysergic color and serialized as if in a knockoff Warhol painting. 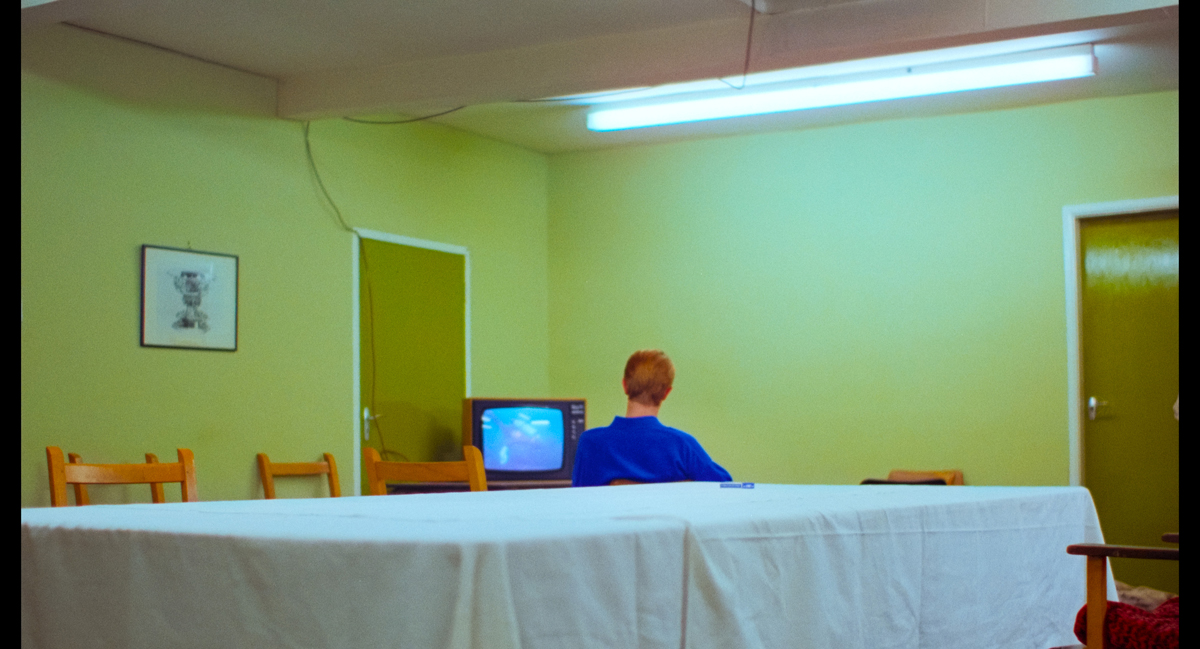 Occasionally Morgen does keep the frenzied splicing in check. In the section of Moonage Daydream devoted to the singer’s “Berlin Trilogy” from the late ’70s—spectral albums recorded after his relocation to Europe from Los Angeles, a move largely necessitated by his wish to end his deepening cocaine dependency—the filmmaker lets us linger in the studio as Bowie consults with Brian Eno. (Appearing onscreen is the text of one of Eno’s Oblique Strategies cards, creative prompts that were reportedly crucial in the making of the triptych: “Faced with a choice, do both,” an imperative that Morgen seems to have misinterpreted as license for his numbing maximalism.) Additionally, Morgen stays in tempo with his subject’s unhurried pace while a peroxided and dandified Bowie (in clips culled from Gerry Troyna’s rarity Ricochet) roams about Singapore, Bangkok, and Hong Kong in ’83, during the tail end of the “Serious Moonlight” tour. 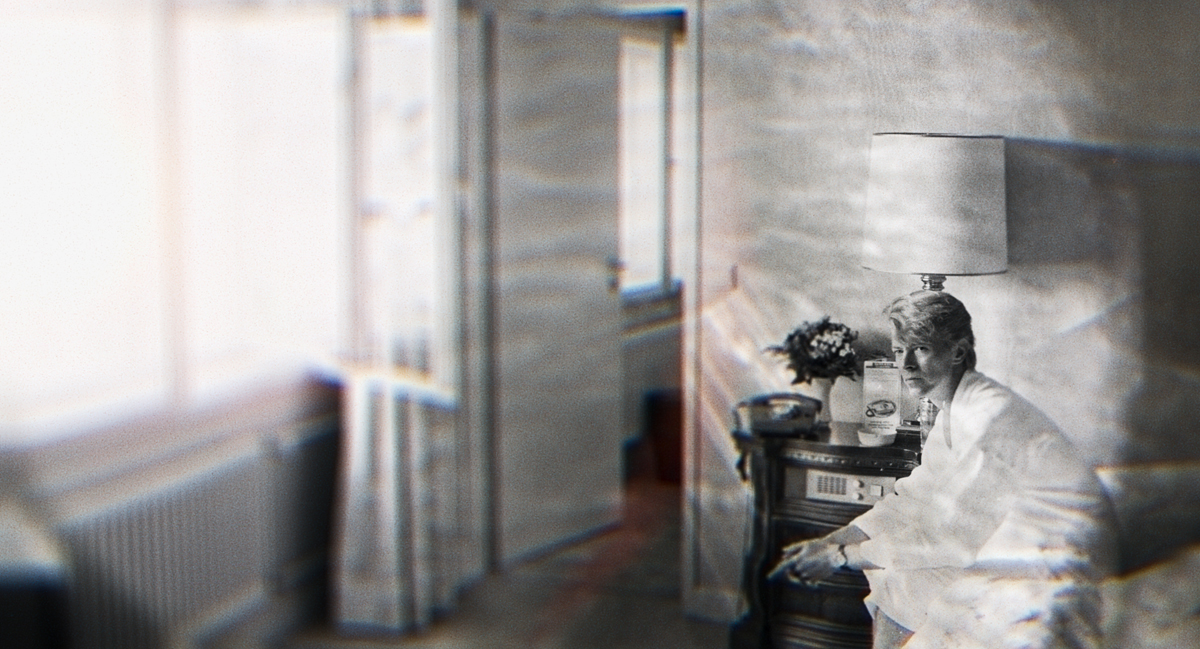 These tonic respites, welcome opportunities to see Bowie hard at work and in leisurely reverie, do not last for long. We are besieged again with baffling snippets of Fred and Ginger gliding in Top Hat, the chess game in Bergman’s The Seventh Seal. Morgen’s documentary bills itself as “immersive,” a descriptor that suggests video games, theme parks, art-exhibition gimmicks. Desperately, manically trying to draw us in, Moonage Daydream succeeds only in pushing us out. The film affords none of the blissful absorption I experienced one Saturday afternoon, shortly after Bowie’s death, at the Paley Center for Media, which was commemoratively reprising its terrific 2002 “Sound + Vision” series, ten hours of Bowie videos and TV appearances. Among the nuggets were the outtakes for a performance of “1984,” Bowie’s disco ode to dystopia, from a special that aired in ’73. Roughly six minutes, the segment shows the singer to be exacting yet not overbearing, concerned only with getting the song perfect. That small stretch of time—uninterrupted and unfestooned—immersed me more thoroughly in the ever-evolving legend than the two-plus hours of Morgen’s ill-conceived Bowie bauble.