In documentary filmmaker Alice Diop’s powerful fiction debut, an exploration of both the limits of knowledge and the expansive possibilities of genre. 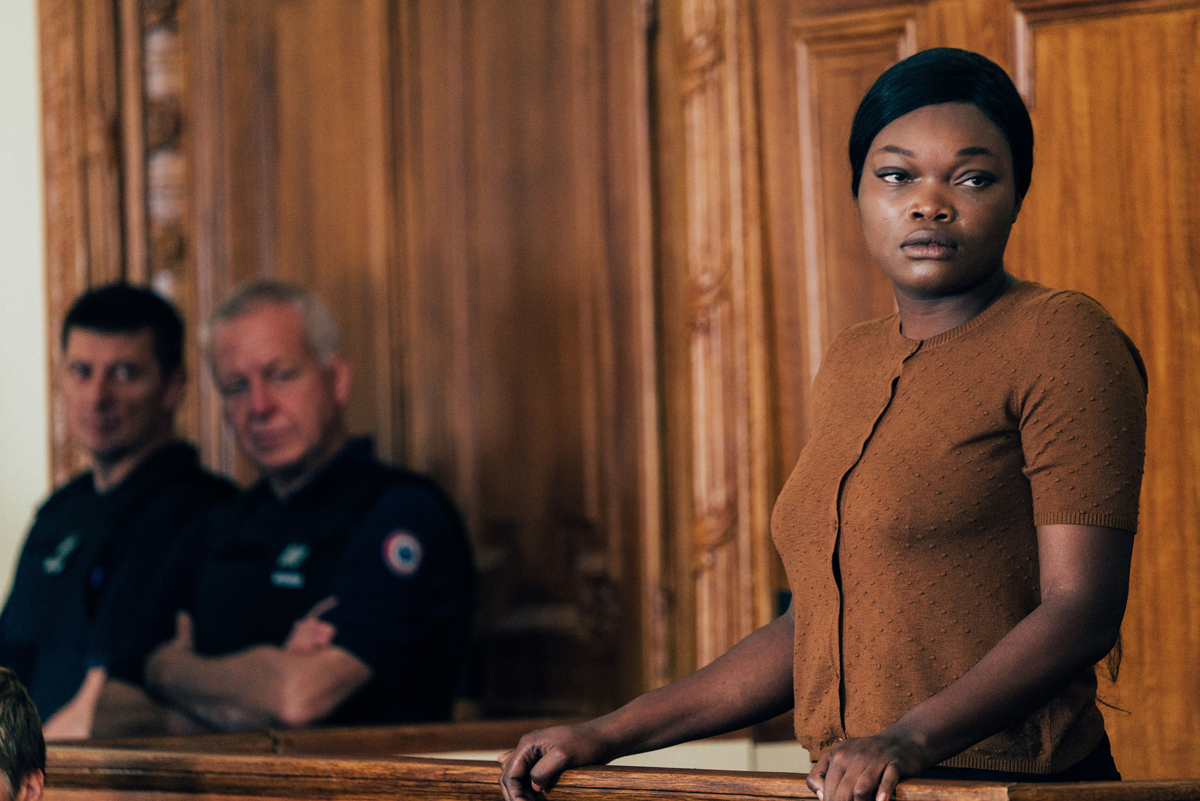 One of France’s foremost contemporary documentary filmmakers, Alice Diop has endeavored “to conserve the existence of ordinary lives,” as she explains in 2021’s We (Nous). In Saint Omer, her supernal first fiction feature—although one deeply informed by fact—Diop focuses on an extraordinary life: that of Laurence Coly (played by Guslagie Malanda), a Senegalese woman who moved to France to attend university and is now standing trial for murdering her fifteen-month-old daughter. This immensely intelligent film rests on a paradox. While exposing a host of limits—of empathy, self-knowledge, language, cultural understanding—Saint Omer expands into infinite possibilities regarding timeworn genres, notably the courtroom thriller and the immigrant tale. 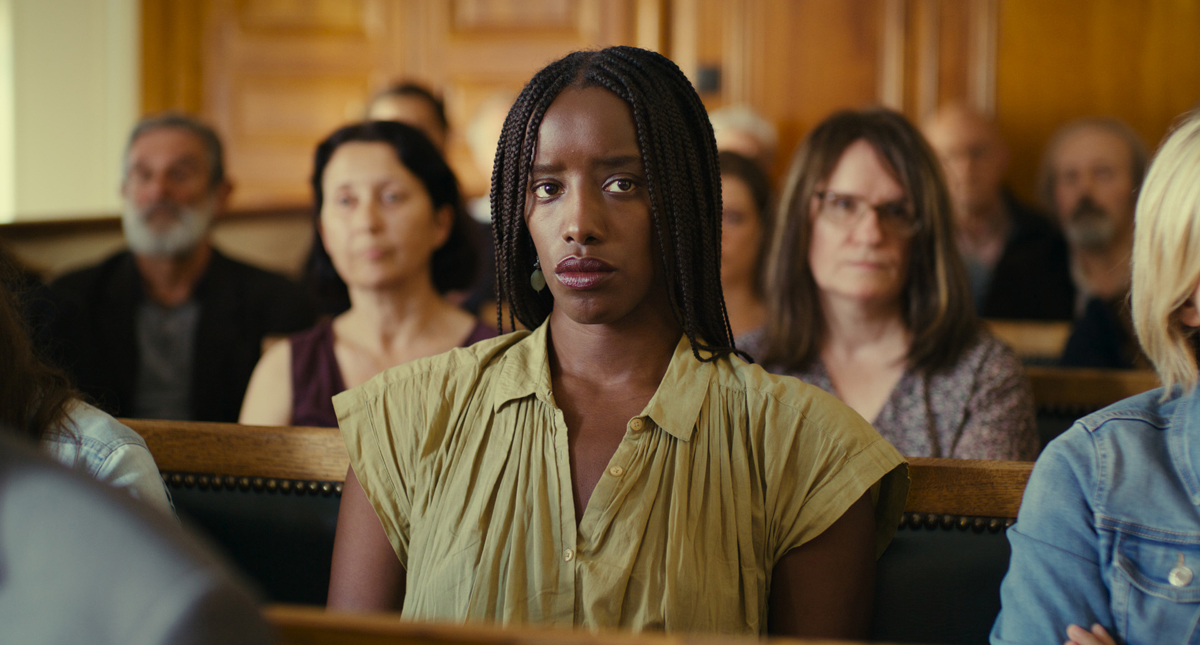 Diop’s movie—which she cowrote with Amrita David (who has also been the editor of all of her films to date) and acclaimed novelist Marie Ndiaye—is based on the real-life case of Fabienne Kabou, accused of filicide in 2013 after leaving her toddler on the beach to be swallowed by the sea. (The movie takes its title from the name of the town in northern France where Kabou, and her cinema surrogate, was prosecuted.) Diop, who became obsessed with the case and attended the trial in 2016, fashions a stand-in for herself in the film: Rama (Kayije Kagame). Like Diop, she is a Parisian who was born to Senegalese-immigrant parents and whose romantic partner is a white man. Similar to her creator, Rama is a successful artist but in a different field. She is a writer and university professor currently at work on a project about Laurence Coly, tentatively titled Medea Castaway. 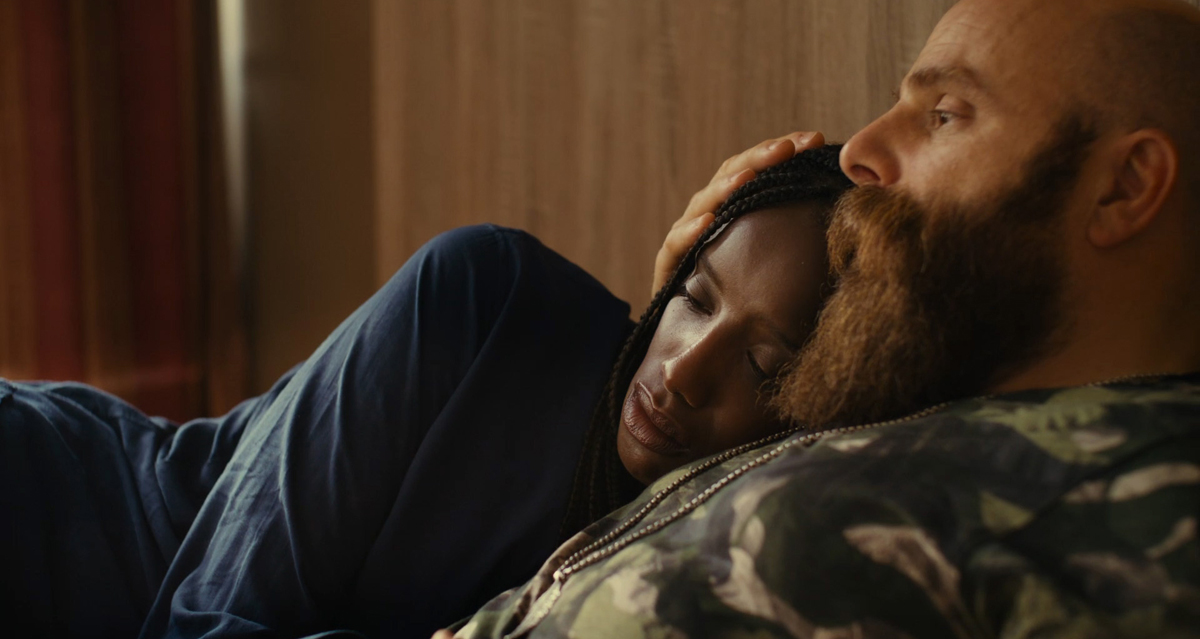 A few days before Rama leaves Paris for the proceedings in Saint-Omer, she gives a classroom lecture on Marguerite Duras and her screenplay for Hiroshima Mon Amour, Alain Resnais’s landmark 1959 film on the horrors of the Second World War and the unreliability of memory. She instructs her students to pay particular attention to the ways that Duras “uses the power of her narrative to sublimate reality.” 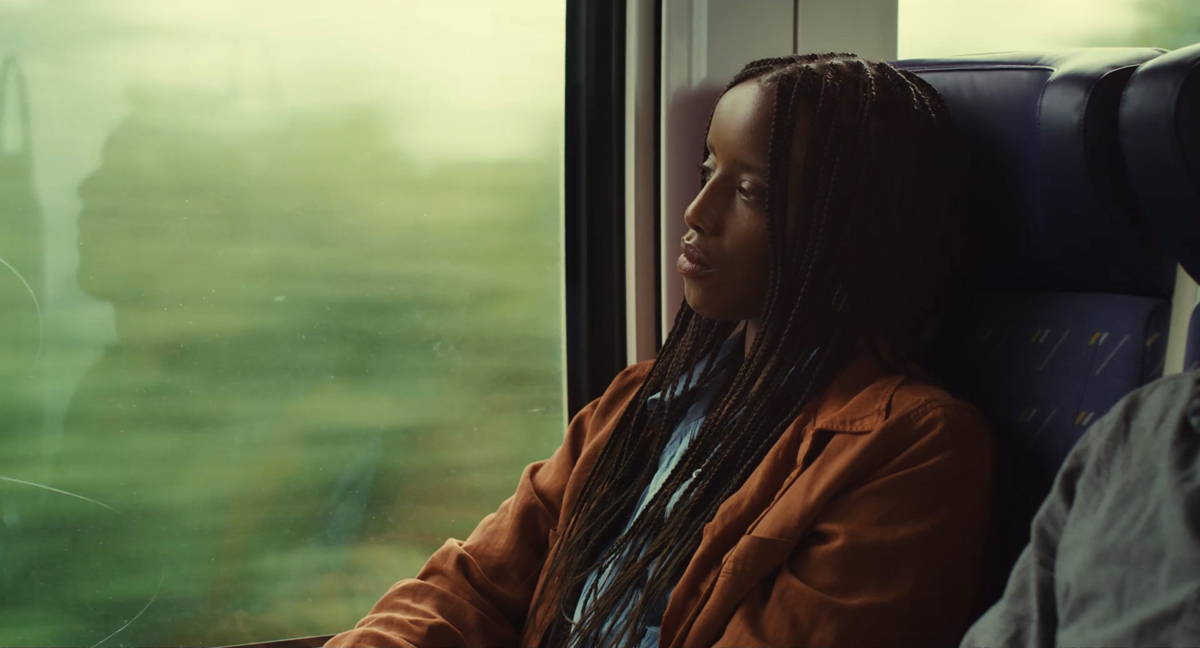 Diop follows the same strategy, transmuting actual transcripts of Kabou’s testimony and that of other witnesses into a spellbinding drama that raises more questions than it answers, that has little interest in patly explaining the accused criminal at its center. It would seem that Laurence Coly remains a mystery even to herself. When, in the early moments of her first day in court, Coly, who does not deny killing her child, is asked by the judge (Valérie Dréville) why she did it, she stolidly answers, “I don’t know why. I hope this trial will give me the answer.” 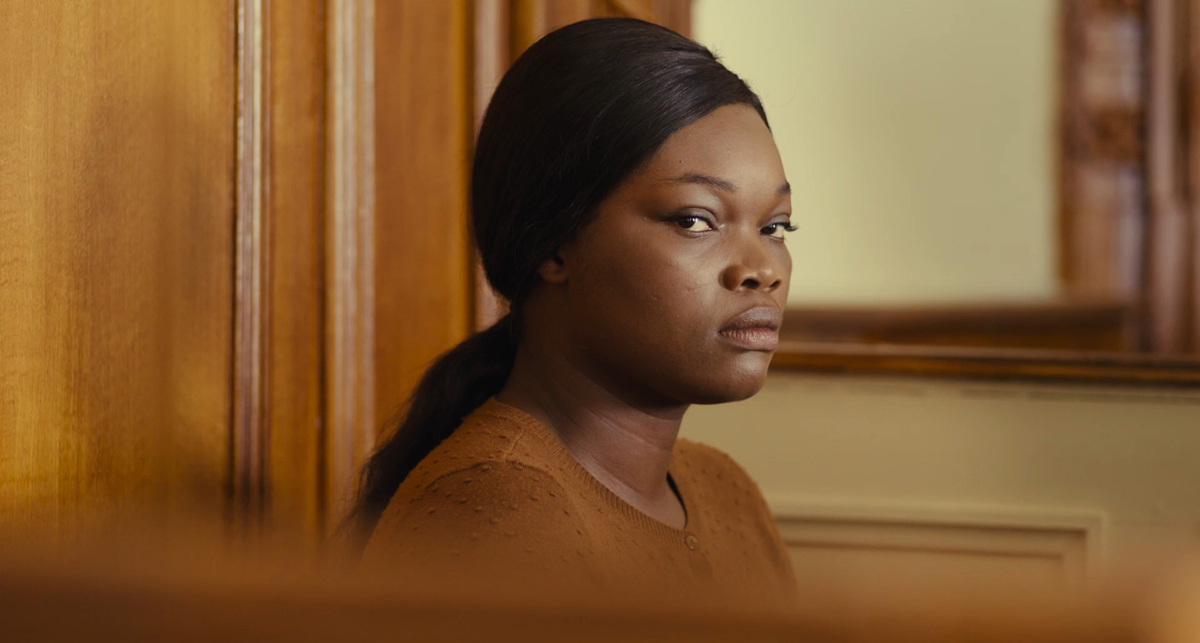 It’s an astonishing line, Coly’s first in the film, made ineradicable owing to Malanda’s exceptionally calibrated performance. Coly’s impassivity serves as her armor, but that carapace is compromised by flashes of disdain, pride, and fear. When not delivering torrents of words, Malanda communicates just as forcefully with her silence. Coly’s thousand-yard-stare indicates unfathomable duress, but that gaze can be aimed with laser precision at others in the court—a look that, depending on its recipient, can suggest enmity, affinity, or a mixture of the two. The acting in Saint Omer is uniformly strong, yet Malanda has the most difficult task of her castmates: bringing to blazing life a woman who categorically refuses to be explained. (Born in 1990, Malanda has appeared in only one other film prior to Diop’s, 2014’s My Friend Victoria. She declined every role offered her after that well-received debut, finding them all “so cliché” and deciding to resume her studies in art history “and wait for the time when things would be better for Black artists in the industry.” In her career as an independent curator, she became friends with Diop, who encouraged her to audition for the role of Coly.)

Coly may be opaque, but the responses and reactions she elicits in others are all too transparent. Back in her hotel room after the trial’s first day, Rama receives a phone call from her editor, who is oddly fascinated by the murderer’s crisp elocution. “She talks like an educated woman, that’s all,” Rama responds with some bafflement, slightly miffed at her interlocutor’s investment in stereotypes about how a Senegalese immigrant should sound. Called as a witness, one of Coly’s former philosophy professors notes how puzzled she was that her promising student wished to write her thesis on Wittgenstein: “Isn’t it rather odd, an African woman interested in an Austrian philosopher from the early twentieth century? Why not choose someone closer to her own culture?” The question does not seem rhetorical. 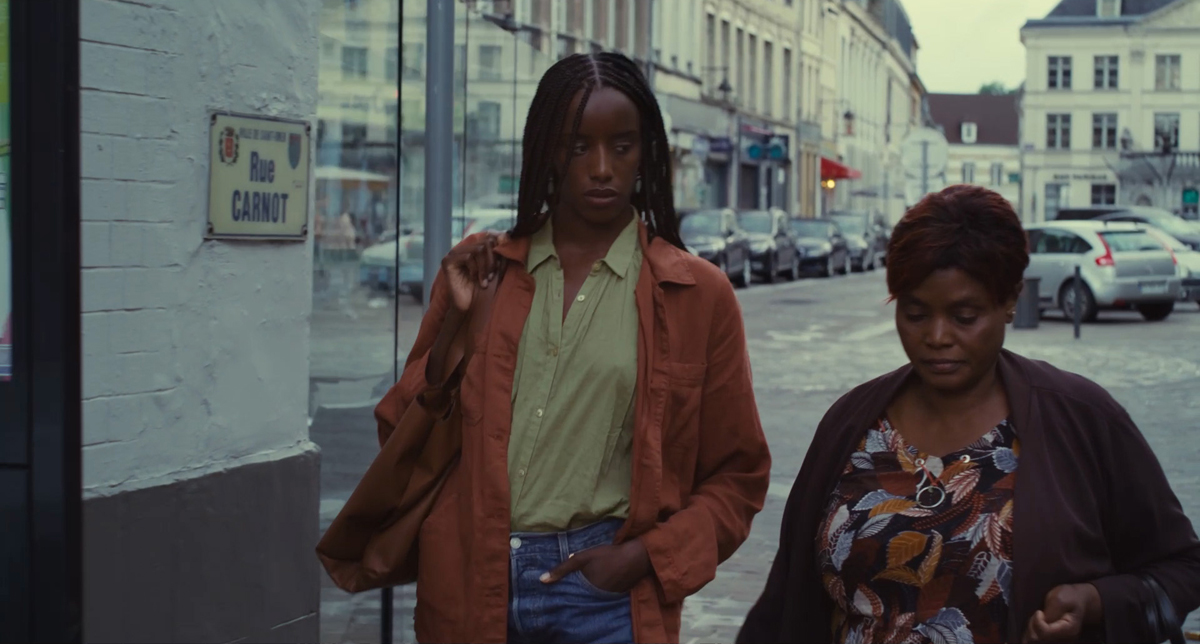 A hallmark of Diop’s nonfiction work is her attentiveness, her patience, her comfort with quiet and ambiguity. This quality is also on display in Saint Omer, evidenced in the long, static takes in the courtroom. These stretches of time allow for the accretion of facts regarding Coly’s backstory: the tremendous isolation she felt in Paris upon her arrival; her once-doting father’s disapproval when she changed her major from law to philosophy; the increasingly dejected circumstances of her relationship with the much older white man, Luc (Xavier Maly), with whom she had her child; her descent into depression. But these rigorously composed segments also reveal chaos and contradiction, as when Coly suggests that sorcery was to blame for her daughter’s death. That supernatural motive—a racist suggestion by the French legal system or a canny exploitation of the same by the accused woman?—is unequivocally endorsed by Coly’s own mother (Salimata Kamate) in court. Yet almost as quickly as Coly proffered witchcraft as an explanation for her crime, she disavows it.

Coly’s attorney (Aurélia Petit) calls her client “a phantom woman.” She certainly functions as such for Rama, haunted by her (mis)identification with the murderer, a connection made stronger by the fact that the writer herself is four months pregnant and seemingly conflicted about her imminent maternity. Yet there are other specters evoked by the case, namely Rama’s memories of her own mother’s extreme misery in France. Just as significantly, there is the Medea myth—another kind of ghost story—that Rama has been using all along to shape her writing on Coly. Before the trial’s final day, Rama watches, late at night on her laptop, Pasolini’s 1969 adaptation of the legend of the smiting enchantress, played by opera supernova Maria Callas in her only screen role. An inscrutable look passes over Rama’s face as she takes the film in. Perhaps she realizes that this millennia-old tale is too overdetermined or ill-suited for the tale of Laurence Coly, a woman whose script, as Saint Omer demonstrates so powerfully, is still being written.