In director Joanna Hogg’s sequel, a rebirth in London. 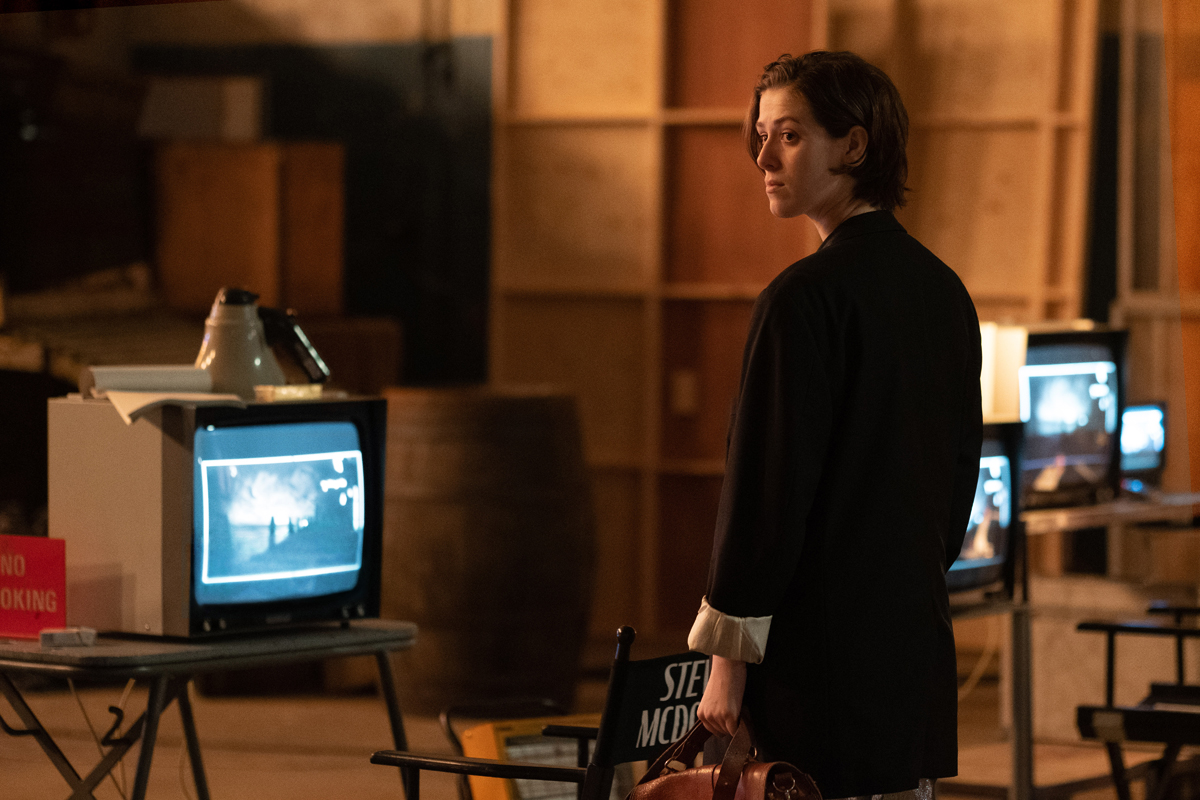 The best autobiographical accounts, no matter how strong and singular the “I,” reflect the inspirations of other lives, of other first-person chronicles. Born in 1960, the British filmmaker Joanna Hogg has mentioned in interviews that one of her favorite movies from her cinephilic early adulthood was All That Jazz, Bob Fosse’s phenomenal 1979 autobiopic, inspired by his near-death experience five years before, brought on by a grueling work schedule and a colossal cigarette intake. Fosse biographer Sam Wasson perceptively described the film—the writer-director-choreographer’s third (and final) Hollywood musical, which dramatizes the creation of a complicated stage production quite similar to Chicago—as a work of “depressive exhilaration.” Those words could equally be applied to Hogg’s The Souvenir Part II, a project that, just as much as Fosse’s did, transmutes the raw data of its maker’s life into a disquisition on art’s ability to restore and revive.

Dejection dominates the opening scene of The Souvenir Part II, which tracks Hogg’s stand-in, Julie (Honor Swinton Byrne), from roughly 1985 to 1990, picking up immediately where its predecessor, The Souvenir (2019), left off. Julie, a film-school student, has retreated to her parents’ luxe Norfolk estate to grieve the heroin-overdose death of her older, charismatic, enigmatic lover, Anthony (Tom Burke), whose all-consuming, at times deranging relationship with the aspiring moviemaker was the focus of the earlier film. Unable to stir from bed or to eat more than a few morsels served on the best china at lunchtime, Julie is coddled by her parents, especially her ever-attentive mother, Rosalind (Tilda Swinton, Swinton Byrne’s mom in real life). Never happiest, it seems, than when ministering to her daughter, Rosalind may wish for Julie’s convalescence to last forever: “I hope you’re going to stay for a very long time—long as possible, my darling.” 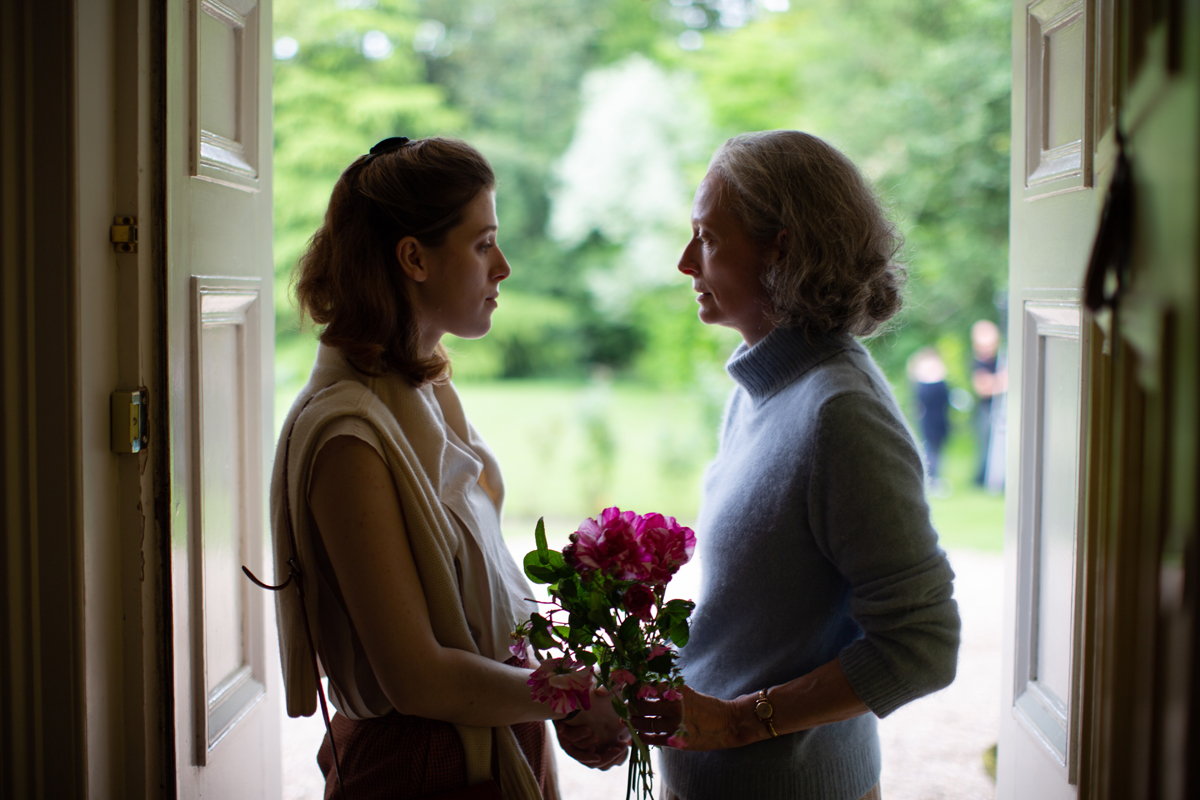 Honor Swinton Byrne as Julie and Tilda Swinton as Rosalind in The Souvenir Part II. Courtesy A24. Photo: Sandro Kopp.

Yet soon enough, Julie, in her signature baggy tweed overcoat, leaves this cocoon to return to her Knightsbridge flat—the setting for some of her most harrowing moments with Anthony in the first Souvenir. Her reentry to her independent London life is scored to a snippet of the 1981 post-punk dirge “Sixty/Forty” by Nico (whose own struggles with smack addiction are an inextricable aspect of her dark celebrity), one of the many deep cuts from Part II’s eclectic soundtrack, abounding with not only ’80s UK pop but also Bartók.

To fully shake off her grief, Julie must also throw herself back into her film program, too often neglected during her chaotic time with dissembling, manipulative Anthony. As dazzled as I was by the performances in The Souvenir, I still responded tepidly to it, largely owing to my impatience with a meek, well-bred female protagonist whose trajectory is largely defined by reacting to someone or something—as was the case with Julie, seduced by a silver-tongued, destructive man all too eager to play teacher and then nearly undone by the crises he instigated. Much of the joy in The Souvenir Part II, in contrast, lies in witnessing the once passive, tentative young woman plunge headlong into creative projects, friendships, and romantic dalliances, all the while trying to make sense of the troubled man who had ensorcelled her. 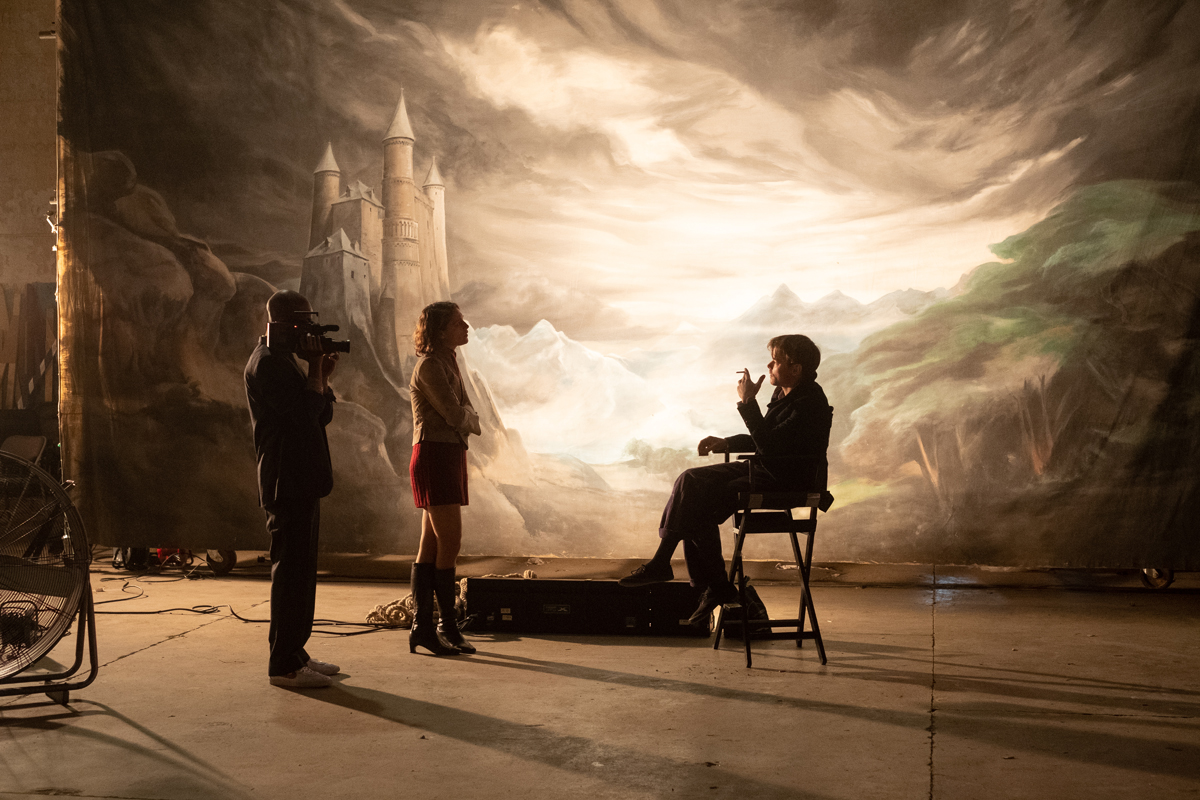 Jaygann Ayeh as Marland, Ariane Labed as Garance, and Charlie Heaton as Jim in The Souvenir Part II. Courtesy A24. Photo: Josh Barrett.

Like the Fosse surrogate Joe Gideon (played by a vulpine Roy Scheider) in All That Jazz, Julie is galvanized by artistic collaboration, by both its attendant pleasures and frustrations. Several of her classmates from The Souvenir return in the sequel, now in bigger roles and with bigger ambitions; like Julie, they are preoccupied with completing their thesis films, projects that entail the participation of their cohort. One of those colleagues, Garance (Ariane Labed), a fleeting presence in the first film who had mentioned her love for a great French movie she had just seen—Diva, the voluptuously stylish 1981 debut from Jean-Jacques Beineix, a progenitor of the cinéma du look movement—is now helming her own ultrachic spectacle.

Garance’s isn’t the only film-within-the-film; the movie genres Hogg salutes by imaginatively re-creating them for The Souvenir Part II are nearly as vast as the idioms of music she’s assembled for its soundtrack. Soon Garance will be portraying a version of Julie in the latter’s thesis project, which, in its final iteration, plays as a fractured fantasia about her relationship with Anthony—a dreamscape that evokes Maya Deren, Sally Potter, Ulrike Ottinger, and The Lady from Shanghai. (It also reminded me, in mood if nothing else, of All That Jazz’s grand finale.) Julie’s movie might be thought of as the answer to a directive uttered by Patrick (Richard Ayoade), a floridly overweening auteur and a onetime friend of Anthony’s: “Make a memorial for him.” Resplendent in a pale-lilac suit and erupting into one fabulous fit of pique after another (“You’re forcing me to have a tantrum”), Patrick is now engrossed in overseeing the musical—recalling both Dennis Potter’s The Singing Detective and Julien Temple’s Absolute Beginners, two paragons of the genre in the UK ’80s—that he had announced he would one day direct during a memorable dinner party in The Souvenir. 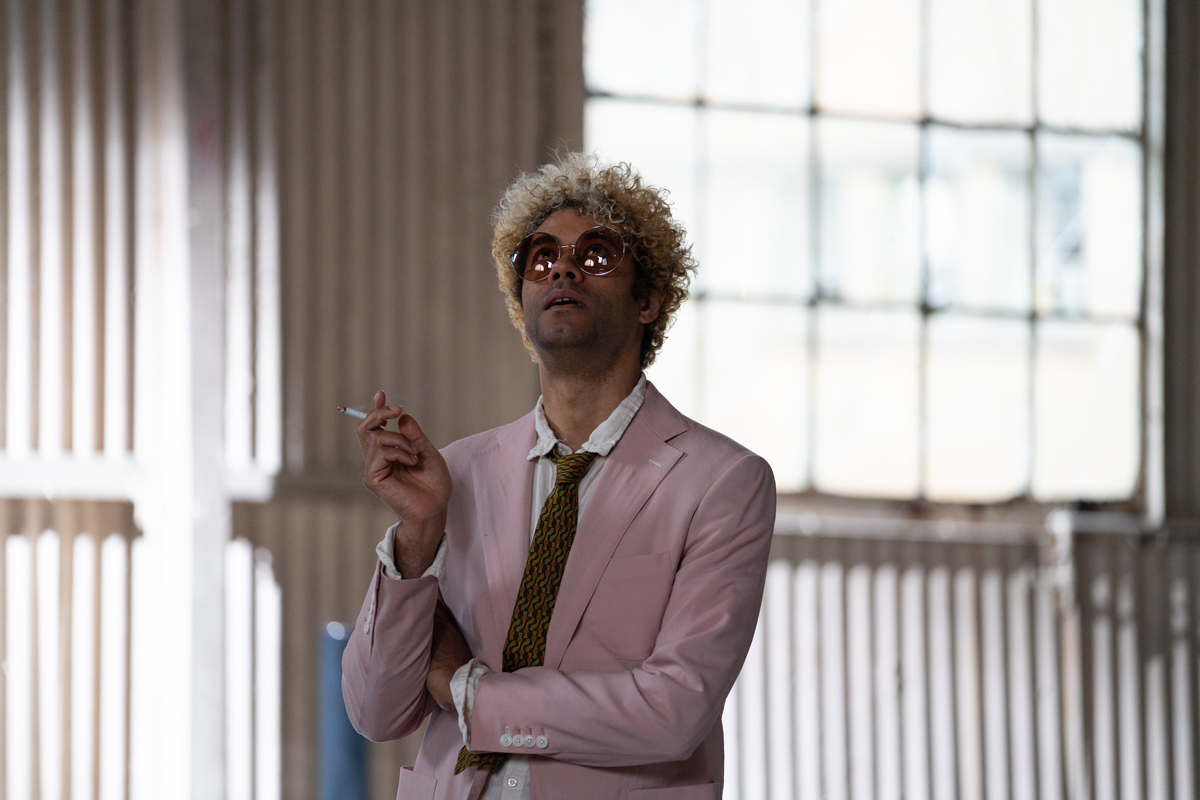 As Julie’s movie nears completion, she runs into Patrick outside a cinema in Soho. “Did you avoid the temptation to be obvious?” he asks about her project. The question clearly served as a guiding principle for Hogg, whose Künstlerfilm, an extremely personal period piece, shuns trite sentiments and, though replete with era-specific details, never feels fusty or hermetically sealed. The Souvenir Part II’s sense of open-ended possibility, its subdued effervescence results primarily from Hogg’s great talent for casting, particularly nonprofessional actors (Exhibition, from 2013, for example, features artist Liam Gillick and punk demigoddess Viv Albertine in the lead roles). Swinton Byrne, who had never acted before her collaboration with Hogg (a nonspeaking cameo in a 2009 movie notwithstanding), brings a vital moment-by-moment unpredictability to The Souvenir Part II. Just as miraculously, Swinton—a friend of Hogg’s since childhood and the lead in her 1986 thesis film, Caprice—forgoes the extravagant tics and mannerisms that have made her performances from the past decade nearly unendurable, proffering instead a rich, complex portrayal of a warm, frustrated matron. 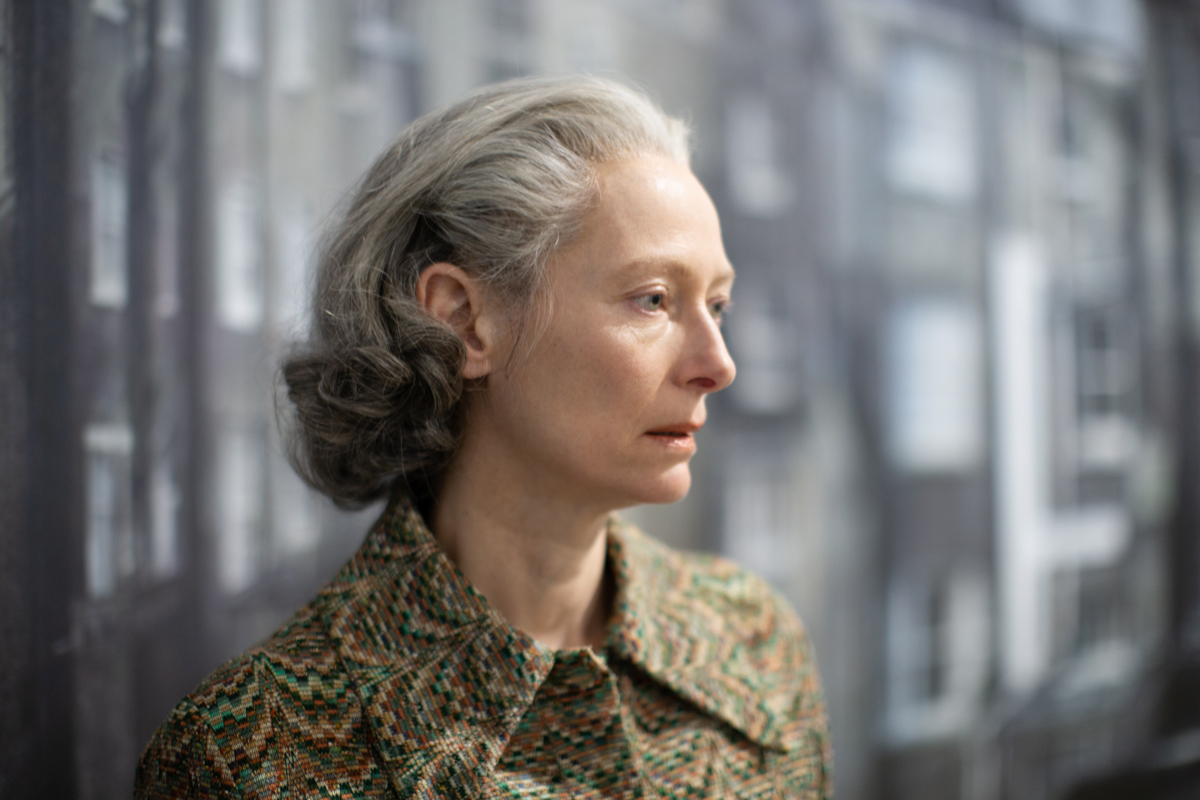