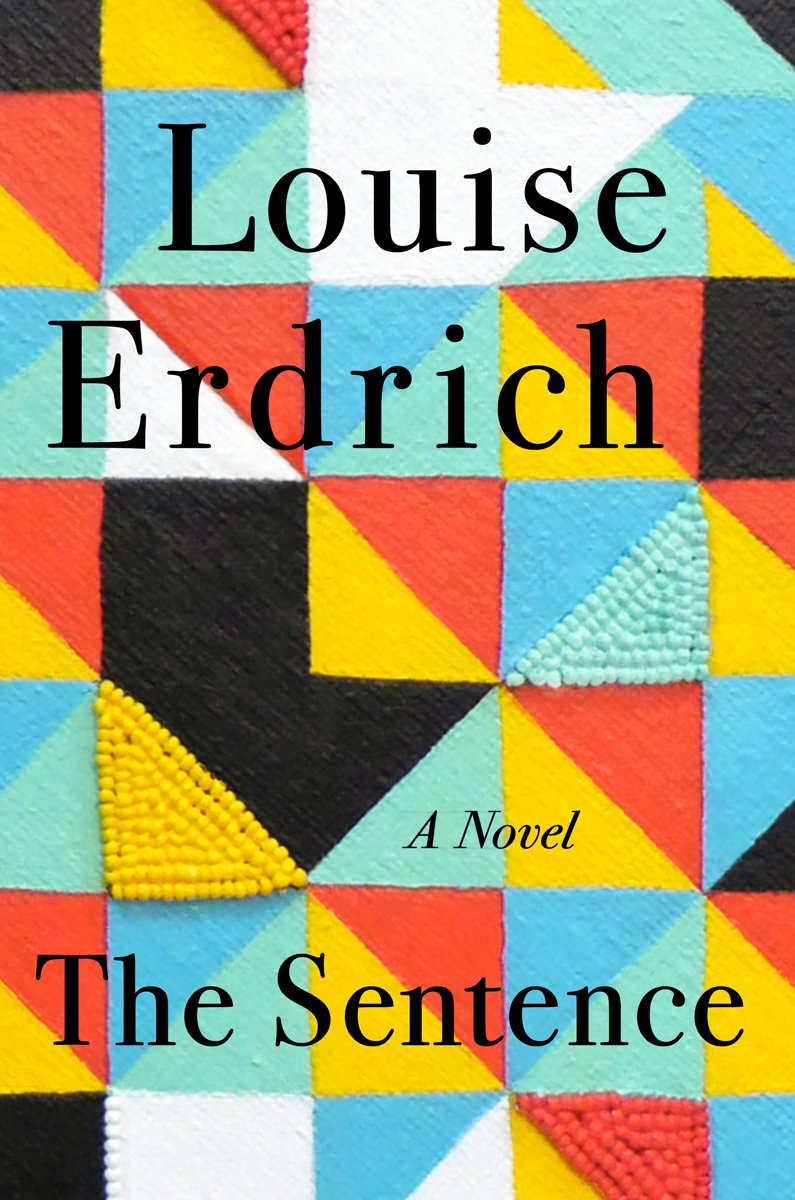 At the beginning of The Sentence, Louise Erdrich’s darkly funny and wickedly brilliant new novel, an Ojibwe woman named Tookie faces a long prison term for illegally transporting a dead body. She looks up the word sentence and stares miserably at “its yawning c, belligerent little
e’s . . . its hissing sibilants and double n’s, this repetitive bummer of a word made of slyly stabbing letters that surrounded an isolate human t.” Her American Heritage Dictionary seems appropriately titled, especially when she tells us that Native Americans are “the most oversentenced people currently imprisoned.”

Tookie becomes a reader in prison, so the novel’s title refers not only to her incarceration but to the words she devours and the sentences she learns to love. Fast forward several years, and she is a middle-aged bookstore clerk in Minneapolis, pressing her beloved authors—Leslie Marmon Silko, Amitav Ghosh, Octavia Butler, Proust—onto potential readers. Then one day, in November 2019, Tookie’s least beloved customer, Flora, is felled by a sentence: on reading a specific line in a mysterious manuscript, she dies instantly of horror. In life Flora was a wannabe, a white person who believed she had Native ancestry. Now she returns to the store as a ghost, hanging around the Indigenous fiction and poetry sections, ignoring Tookie’s hints to leave.

Erdrich’s great gift is for creating fully realized, fully human characters in complex and satisfying relation to one another. But ghosts and spirits also recur in her fiction, maybe because she knows as well as any American writer where the nation’s bodies are kept. At the close of The Night Watchman (2020) she imagines the museums of Washington, DC, as the sites of ghostly parties, storage rooms and exhibits packed and lively with the Indigenous undead. In The Sentence she reverses the terms of the haunting—with commentary from Tookie, who remarks that “unquiet Indians” are an old story in American fiction. “Hotels were disturbed by Indians whose bones lay underneath the basements and floors—a neat psychic excavation of American unease with its brutal history. . . . [But] what about unquiet settlers? Unquiet wannabes?”

For Tookie and the other customers and staff, the store—like Erdrich’s own Minneapolis bookshop, Birchbark Books—is a meeting place for “Indigerati,” a place to talk about your major in Ojibwe, to debate which foremothers should be on your new tattoo, to trace the patterns of an urban, intellectual Native selfhood. Indigenous people, one fellow clerk observes, “have to consciously pull together our identities. We’ve endured centuries of being erased and sentenced to live in a replacement culture.” Like Paul Beatty in The Sellout, Erdrich is working the question of who and how to be when you’re misrepresented, exploited, and surrounded with simulacra of your own experience.

When Tookie isn’t selling books, she’s home with her husband Pollux, an ex-cop who devotes himself to tribal arts and rituals, preserving and nurturing his Potawatomi culture in a majority white nation. Tookie isn’t into rituals, though she is willing to get into arguments with other Native people about which lake has the best wild rice and feels that she’s no less Ojibwe for being “ceremony-averse.” She’s also family-averse, so when Pollux’s niece Hetta and her baby moves in with them, she’s confronted at home with another ghost, of her own maternal self, as she discovers to her disgust that she has a caring side.

Partway through The Sentence, Tookie’s personal troubles get pushed aside by the country’s. Shortly after Flora’s death, the pandemic hits. Louise breaks off her latest book tour. Tookie, viewing the bare shelves in the supermarket, feels like she’s in “the beginning of every show where the streets empty and some grotesque majestic entity emerges from mist or fire.” The bookstore closes; filling mail orders gives Tookie too much time alone with Flora. Soon many are dead and Minneapolis is in flames.

The individual and collective search for identity affects each character’s response to the death of George Floyd. On her way to protest, Hetta argues, “We have to stand with Black people because we know. The MPD has fucking done this to Indians since the beginning of this city. No, before that. They practiced on us in the Dakota War and ever since.” Amid the marches, the tear gas, and the rubber bullets, Tookie says, “everything seemed to be cracking: windows, windshields, hearts, lungs, skulls.”

At first Tookie feels a lifetime of suppressed fury “going off inside my body like popped corks; the rage-champagne and feral glee were foaming out. . . . Assault by COs, offhand blows, shoves, kicks, contempt. All of the times I was treat like a piece of nothing-dirt by a cop or someone in a uniform. More bubbles brimmed up in me.” Pollux helps organize an Indigenous safety patrol, but despite their efforts the brand-new Native community center burns. On June 2, even Tookie with her dislike of ceremonies goes with Hetta to Thirty-Eighth and Chicago to watch her and other Indigenous people perform a dance for the dead.

If you’d been wondering who was going to write the first Great American COVID-19 novel, you might not have guessed Erdrich, whose gifts of empathy and imaginative power aren’t the kind usually associated with hot takes on current events. On the other hand, Erdrich is coming off a decade-long run of one great novel after another, winning the National Book Award for The Round House (2012), the National Book Critics Circle Award for LaRose (2016), and this year’s Pulitzer for The Night Watchman. She explored a more fantastic side in her deliciously strange feminist dystopia Future Home of the Living God (2017), an aspect of her work that she deploys more confidently here.

The Sentence must have been written at high speed, and the haste shows, but what the book loses in tidy plotlines and a satisfying resolution, it gains in urgency and inventiveness. Rising from last summer’s ashes and honoring its ghosts, The Sentence is the perfect book to read right now, an unpolished, intense, politically passionate, sorrowful, comic masterpiece.

Julie Phillips’s book The Baby on the Fire Escape, on mothering and creative work, will be published in April 2022.