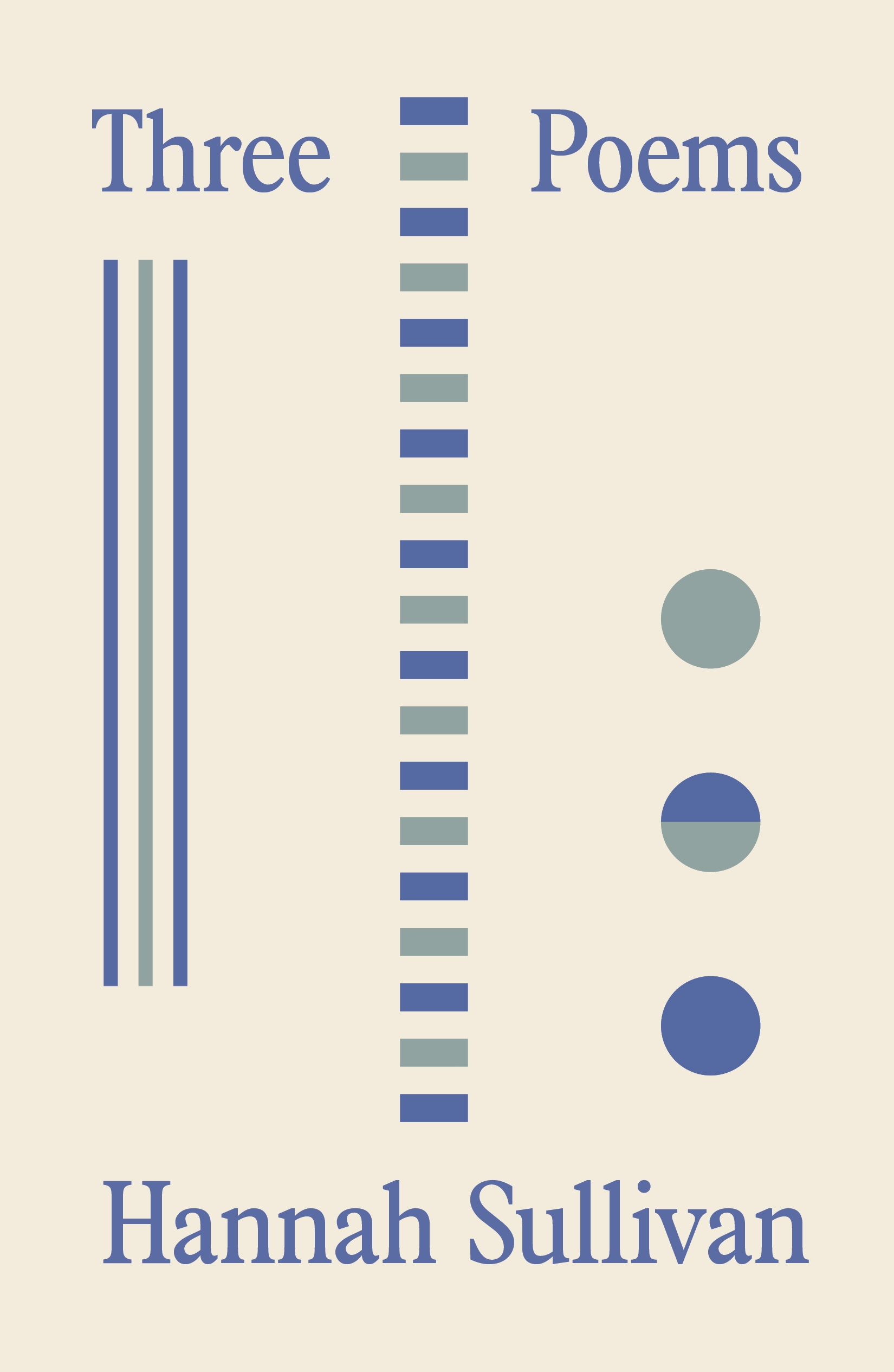 Three Poems is Hannah Sullivan’s first poetry collection; when published in the UK in 2018, it won the prestigious T. S. Eliot Prize. Sullivan is an academic as well as a poet—her first book was a study of revision in modernist writing—and Three Poems is quite as erudite as you might expect from a Harvard PhD and current professor of English at Oxford. That her poems are also elegant, affecting, and verbally memorable—this has less to do with their taut confessional arc, and more with Sullivan’s balancing act between form and its discontents. Three Poems takes Sullivan from her experiences of New York while she was a graduate student, through a shifting and mirage-like period in California, to a year in which her father died and her first child was born. In each case, form—narrative shape as well as poetic structure—is an expectation repeatedly dashed and broached again.

The first poem—twelve pages long, half the extent of the others—is called “You, Very Young in New York”: a title that risks a lot in the way of cliché, and conjures many antecedents, from Edith Wharton to Lena Dunham. In the first of several italicized quotations that punctuate the poems, Sullivan gets her Joan Didion reference in early, and cites a passage from “Goodbye to All That” where Didion is watching a cockroach on the floor of a bar instead of a space flight on television. Expectation, boredom, distraction, and youth: the 2000s equivalent involves ambiguous sex, disappointment with Obama, and “dancing in a suit skirt to the Killers’ ‘Mr Brightside’.” Sullivan exactly anatomizes an era, piling up details—where were his hands? whose song on the radio? what were that season’s cocktail ingredients?—in stanzas that quickly shake off the tight terza rima of her opening pages and loosen into long-lined Whitmanesque vistas of city nostalgia.

In its constellating of period detail, “You, Very Young in New York” can seem too predictably of its moment—“a dopamine prick, as the Ritalin kicks in”—but there’s a voice here other than the merely memorial, and it says: “The thing about being very young, as you are, is the permeability / Of one person to another.” Sullivan means both the adventure of encounters between unformed identities, and the way in early adulthood we happily abandon present selves in order to become the future. Easy enough to imagine that art, poetry, song, certain exemplars, will teach us how to make or choose a self: “You are listening to Bowie in bed, thinking about the hollows / Of his eyes, his lunatic little hand jigs, longing for Berlin in the seventies.”

Of course, such historical phenomena as modernism, youth, or Berlin in the seventies exist only after the fact; we never quite know how new everything is until it starts to feel old. By which time we will find ourselves, as Sullivan does, commanding ourselves to remember, to forget, or atone! Three Poems is haunted by the Greek philosopher Heraclitus’s famous statement about universal flux—though even this doesn’t appear as we might remember it, with Sullivan (who started out as a classicist) giving us an oddly phrased variation: “On those who step into the same rivers, different and different waters keep on flowing.” The reference to Heraclitus recalls his influence on the poetry of Gerard Manley Hopkins—there’s an echo of his word “brinded” in Sullivan’s use of “brindled”—and you can hear something of Hopkins’s tone and alliterative texture in Sullivan’s reflections on form: “When things are patternless, their fascination’s stronger. / Failed form is hectic with loveliness, and compels us longer.”

Sullivan’s focus on the unformed may seem strange in a poet who is in many respects so very much in charge of her material. She is not just another well-read poet who repeats, or reflects on, Eliot’s habit of quotation; when she quotes another writer, in this case F. Scott Fitzgerald, she’s quoting Fitzgerald invoking Eliot (emphasis mine): “Forms leaned together in the taxis as they waited, and voices sang, and there was laughter from unheard jokes, and lighted cigarettes outlined unintelligible gestures inside.” Except: you can’t exactly read such citations as examples of authority, or reference points that will hold the whole poetic collage together, because what they seem to say time and again is that forms will not tell us anything true, nor will reciting gobbets of The Waste Land or The Great Gatsby teach us how to be adults.

What of image or metaphor, the pleasures and precision of figural language? Sullivan is quite brilliant at the level of the individual phrase, the strangely turned observation. In the second poem, “Repeat Until Time,” she describes a horse-chestnut tree in winter, “low-carb skeletal, squash lean, only to / Have another go with the old Cool Whip come spring.” The third poem, “The Sandpit After Rain,” which speaks of the death of Sullivan’s father and the birth of her son, is especially well stocked with arresting imagery. Waiting to be born, the baby puts Sullivan in mind of a live eel on display in a restaurant: “It wants to be rid of the tank.” The newborn’s eye makes her think of “a poster of the Aegean, / And how the iris tans, brindles, picks up its sun-spots.” Later, Sullivan expresses milk for her baby, and feels something like “the huge relief of the sea as it reaches the beach.” Sometimes, however, metaphor gives up, as it does in the hospital room where her father is dying, and she simply wishes for this dignity: “yes, let it be odourless.”

I wonder to what extent the exactitude of such phrasing works against the idea of a productively “failed form.” Isn’t an accumulation of these confident observations in the end one version of form? In “The Sandpit After Rain,” Sullivan writes: “This is the world and the entropy of things, / The plugged dyke and the sea coming in, / The emendation and the introduced error.” Chaos reigns, and decay, but then we admire, she says, the courage of street cleaners, the perseverance of seaside house painters. The ever-changing river is one thing, terrible and attractive enough, but there are also the duties and joys of order and repetition—even of tradition, in Sullivan’s generous congregation of influence.