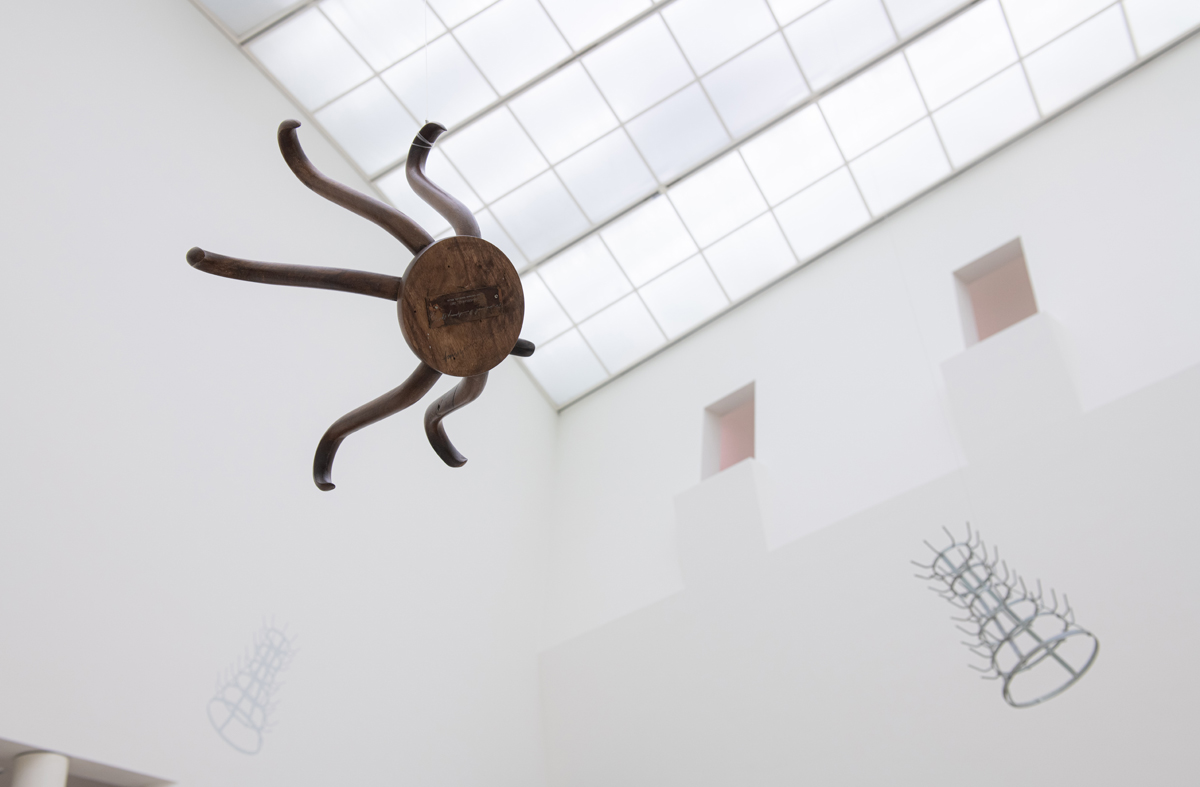 Marcel Duchamp was an interesting artist who did a number of different things. Once he made a watercolor sketch of his sister Yvonne wearing a kimono. Another time he crafted a little oil painting of Saint Sebastian (but without any arrows in him). In 1907 he designed a menu featuring a naked woman heartily drinking champagne, and he wrote letters to confidantes with instructions about how to install his art. He had a fancy-looking business card. Early in his career, with the help of his sisters, he composed a piece of music for three voices, its lyrics borrowed from the dictionary definitions for the word “to print.” He put a cuttlefish bone and a thermometer in a tiny cage filled with marble sugar cubes—and actually he did that a number of different times. Later he attached a spoon to a door lock in his studio, and he nailed a coatrack to the floor. And he had his photograph taken a lot. People filmed him and he gave interviews. He played chess. And he made optical illusions that spin on the wall. 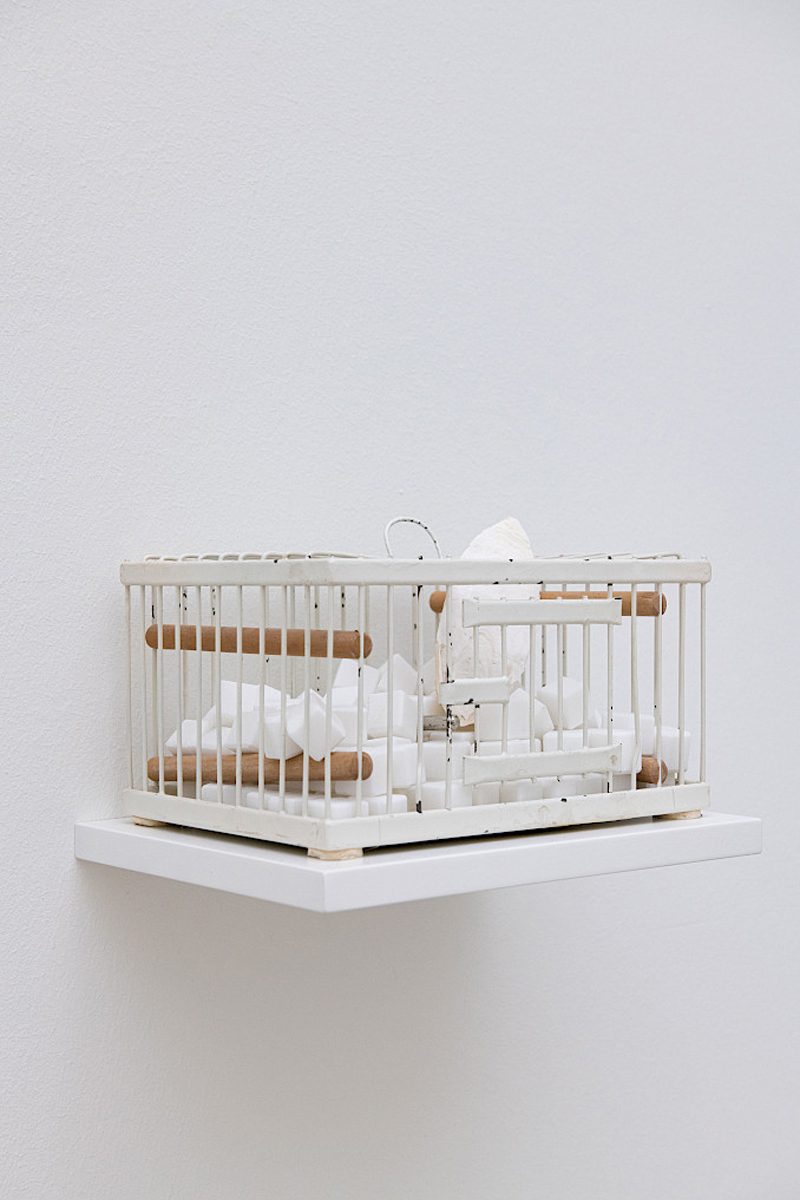 All of this is in evidence at the Museum für Moderne Kunst (MMK) in Frankfurt, Germany, which, until October 3, is functioning somewhat like a Marcel Duchamp archive. Technically it’s a retrospective exhibition, featuring approximately six hundred objects, but it’s so straightforward—with no subtitle or slant—that it feels almost unreal. It’s a meticulous instance of gathering and display, an inventory of many, many items made by this remarkably influential artist, ranging from books and objects to letters and paintings, filling every inch of this three-story museum. (No American institution would ever dare such a feat.) People often speak of Duchamp as if he were a technique or strategy or simply a set of lessons, the inventor of the readymade if not the progenitor of a whole conceptual-institutional way of thinking, and while this exhibition does not debunk such a reading, it contains so many things that it restores the reality of the artist’s work (both as noun and verb). Duchamp’s is no longer simply a career of high notes but also one of minor chords, strange decisions, and fruitless paths. So while we can find the old lessons here, other possibilities hide in the wings, too. 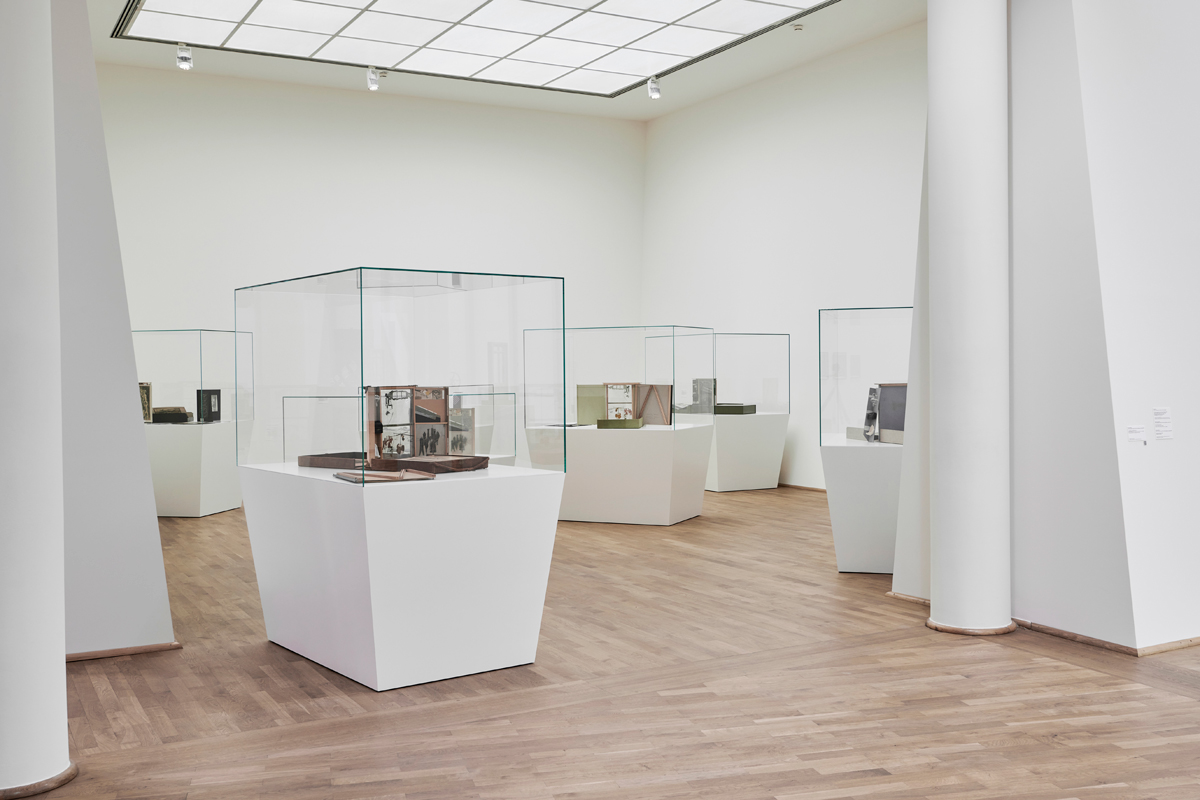 It feels right that this is not a traveling exhibition, though Duchamp often thematized movement in his work: his meticulous Box in a Valise, developed from 1935–41, all seven editions of which are installed in the show, shrinks his greatest hits into miniature replicas and packs them into a suitcase. (First produced under the specter of war, they enabled his reputation to spread far and wide.) The show is more of a pilgrimage site. Designed by Austrian architect Hans Hollein in the early 1980s and finished in 1991, the museum is a strange machine-for-looking perfectly suited to Duchamp’s sly glances and wry sense of humor. Shaped like a slice of pie, full of acute angles and plays with perspective, the building contains short staircases offering views onto a voidlike atrium. With its windows covered, it’s an haute white cube, and curator Susanne Pfeffer has done little to alleviate this arch, antiseptic feeling. In fact, she has heightened it. Rather than restage Duchamp’s many exhibition interventions—whether the 1200 Bags of Coal, hung up in 1938, or the Mile of String, strung out in 1942 (tellingly both were enacted in the service of Surrealist exhibitions)—she has given each object luxurious amounts of unadorned space. The only moment of curatorial animation takes place in the museum’s aforementioned atrium, where Pfeffer has suspended a number of readymades from the ceiling, like satellites. (She has painted mysterious drop shadows on the evenly lit walls.) By patiently presenting the remains of Duchamp’s career in exquisite arrangement, the exhibition imagines artworks as something akin to artifacts. As such it’s very much a scholar’s exhibition. Almost entirely devoid of didactic labels and with the accompanying catalog (including texts by scholars Huey Copeland, Quentin Meillassoux, and Legacy Russell) not yet published, the onus falls on the viewer to provide context and imagine past, and future, lives for the works on view. 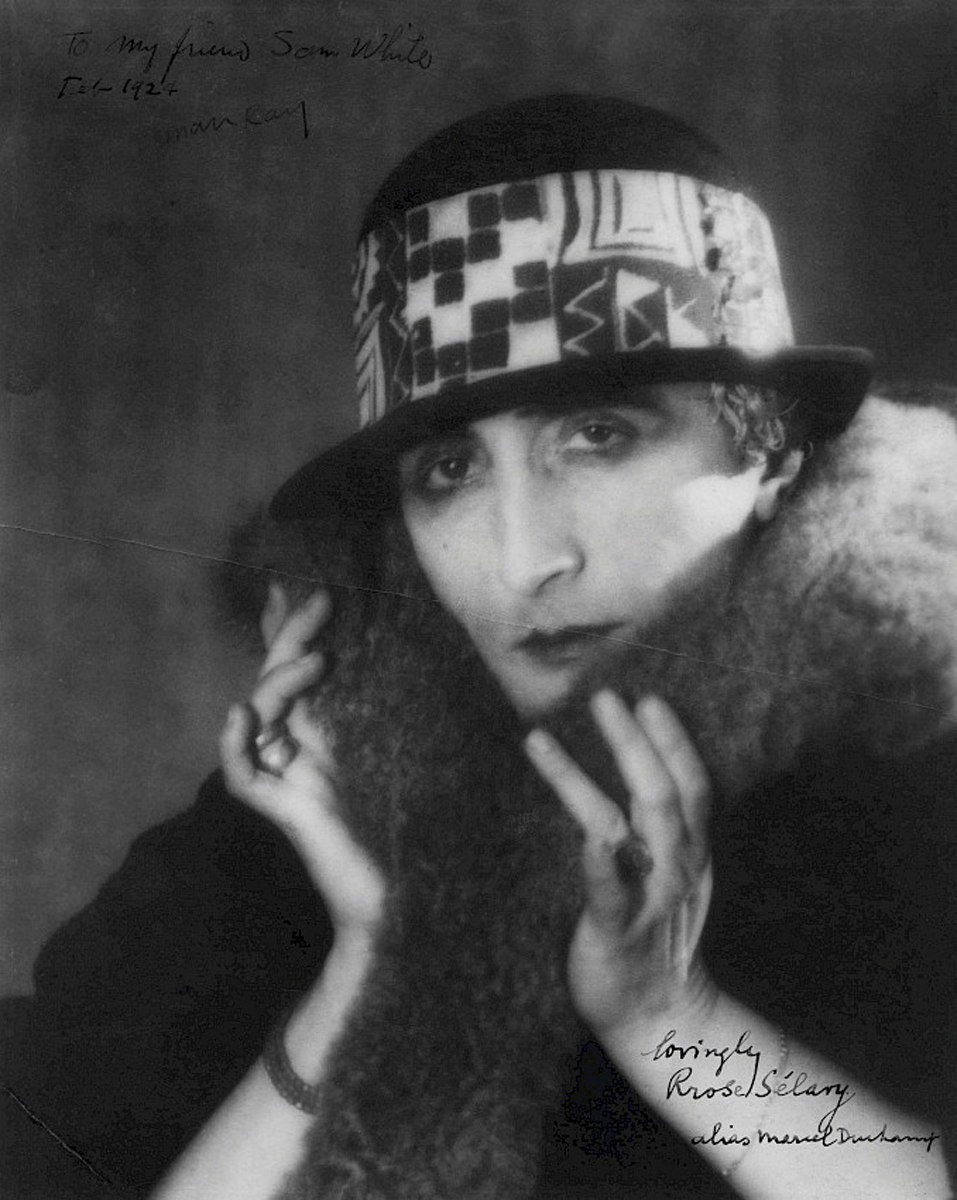 The life that we do see in the exhibition very much belongs to Duchamp—or rather the body, figure, look, and profile he cut through the world. One darkened gallery presents a 1962 interview with the artist Richard Hamilton conducted for the BBC Monitor program, questions answered in Duchamp’s exacting transatlantic English. (“Everybody is making,” he quips, “not only artists.”) Another loops Andy Warhol’s 1966 screen test, four silent minutes of the Frenchman smiling, wryly looking around, occasionally pulling on a cigar and taking a sip of water, overlit. Whether loquacious or mum, Duchamp had an amazing air of precision, knowingness, and charm. Moving through the show we get the sense of an intensely handcrafted persona and how it possessed subsequent generations of artists. (Photographs from his 1963 retrospective in Pasadena, curated by Walter Hopps, demonstrate his ability to gather luminaries—Eve Babitz, Dennis Hopper, Ed Ruscha, Warhol—around him.) And yet Duchamp was changeable, containing multitudes. There are numerous instances of the artist posing as his female alter ego, Rrose Sélavy (there’s a pun here for French speakers), as well as multiple iterations of Marcel himself—with devilish shaving cream covering his head and face; with a star shaved in the back of his head; with a louche look slouching in a collector’s bathroom. But one work I’d never seen before spells out Duchamp’s theory of self-fashioning and the linguistic nature of his thinking on subjectivity: Waistcoat for Benjamin Péret (1958; somewhat mysteriously, the piece was made the year before Péret’s passing). Suspended from a nail and hanger, the readymade corduroy vest is decked out in vertical red and black stripes. The name “Duchamp” is handwritten on a small swatch of cloth where we’d typically find a designer’s label, both signing and branding the work, but then I noticed another name: the brass buttons down the middle, which close the vest and hold the person within, spell P-E-R-E-T. Péret was a key mover in Surrealist circles, and though his writing tended toward the automatic (certainly he was far from “buttoned up”), Duchamp makes clear that anyone who links letters creates structures that hold them upright. And language, certainly, was one of Duchamp’s great materials. 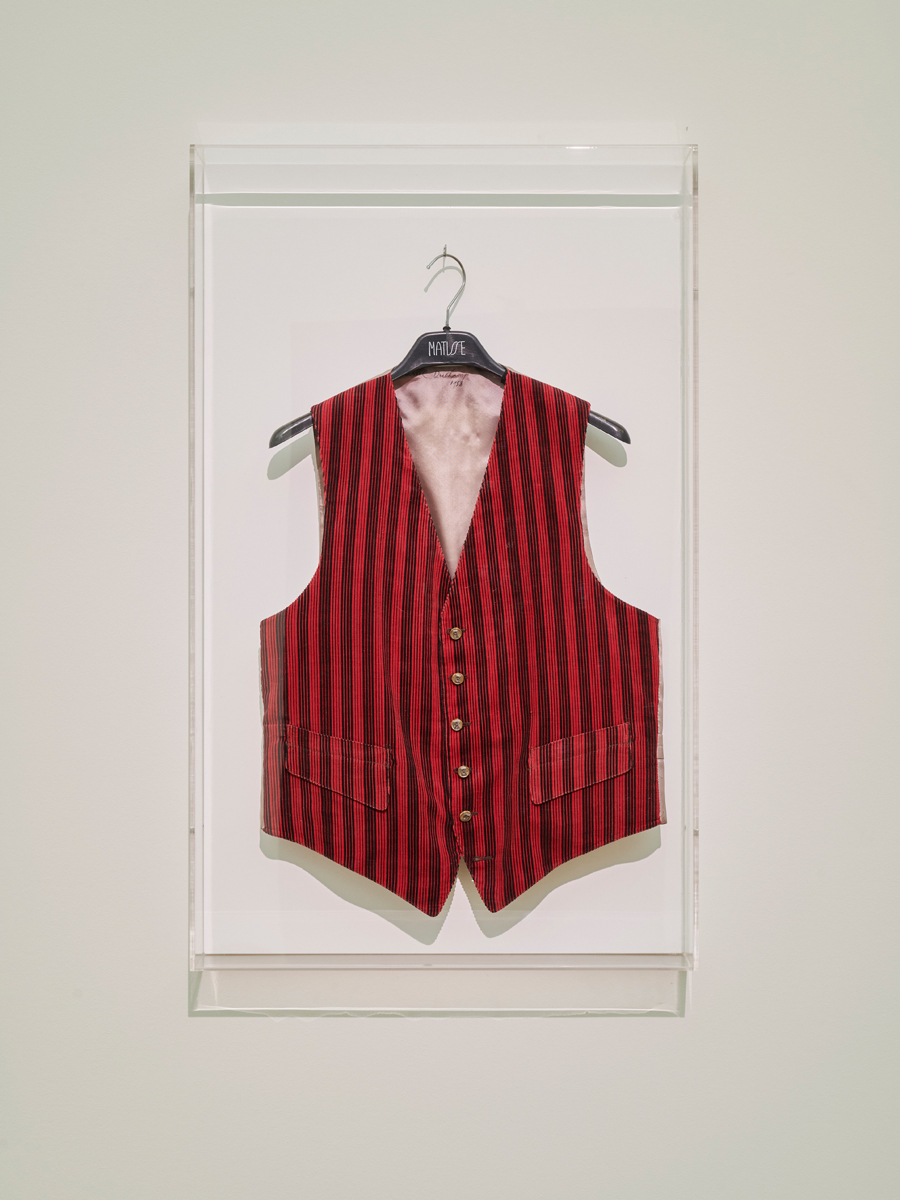 This exhibition is remarkable in many ways—remarkable in what it has brought together (many Duchamp works, such as Yale’s Tu m’, 1918, and Philadelphia’s Étant donnés, 1946–66, don’t travel, but most everything else seems to be here), and remarkable for the learning that it allows: we see so much here of an artist whom we thought we knew and who we’d been told didn’t produce so much. It is also remarkable to the extent that it tacks away from today’s tendency to search out underrecognized figures. Duchamp is one of the most influential artists of the twentieth century, a proper foil to Picasso, but Pfeffer has made a strong case here for the necessity of reassessing canonical figures and grand narratives if only to demaster them, to make them multiple instead of singular. What kinds of language bind artists and histories together? The stories we know (or thought we knew), it turns out, are riddled with holes and gaps.