In Mathieu Amalric’s new film, nonchronological storytelling reflects a woman’s mindset over a period of intense grief and loss. 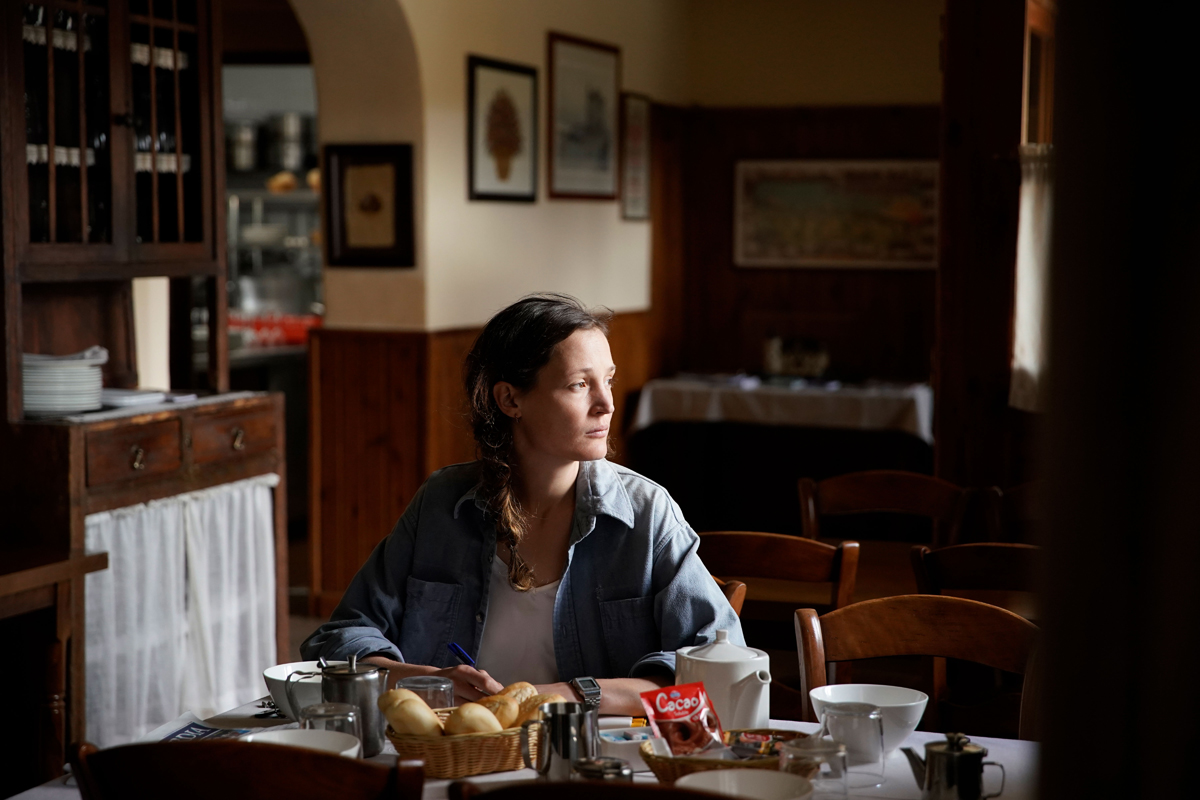 In Mathieu Amalric’s Hold Me Tight, grief transforms. Like tears seeping into a printed image, the details warp and the colors swell and bleed into one another. The text grows fuzzy; it becomes something else. Cinema, the “art of ghosts” per Jacques Derrida, has always commingled the real and the imaginary, conjuring as it does an uncanny realm that gives shape to feelings, desires, beliefs. It’s no wonder, then, that so many filmmakers make nostalgia-fueled revisionist accounts of their personal lives and the historical milieus that shaped them, and, in some cases, cast themselves—and their friends and lovers—as characters in their own self-fashioned celluloid dreams.

Goblin-grinned actor-writer-director Amalric is no stranger to such a calculus; it appears to be his point of departure as an artist. Beyond his aggressively metatextual collaborations with filmmakers like Arnaud Desplechin (1996’s My Sex Life . . . Or How I Got into an Argument) and Roman Polanski (2013’s Venus in Fur), Amalric has repeatedly starred in his own films opposite partners and intimate collaborators. The Blue Room (2014), an adaptation of a Georges Simenon novel, sees Amalric in the throes of erotic obsession with a femme fatale played by his then-partner and cowriter Stéphanie Cléau; Barbara (2017) features Jeanne Balibar, his ex-wife, as an actress preparing for the lead role in a biopic about the French chanteuse by a director played by Amalric. 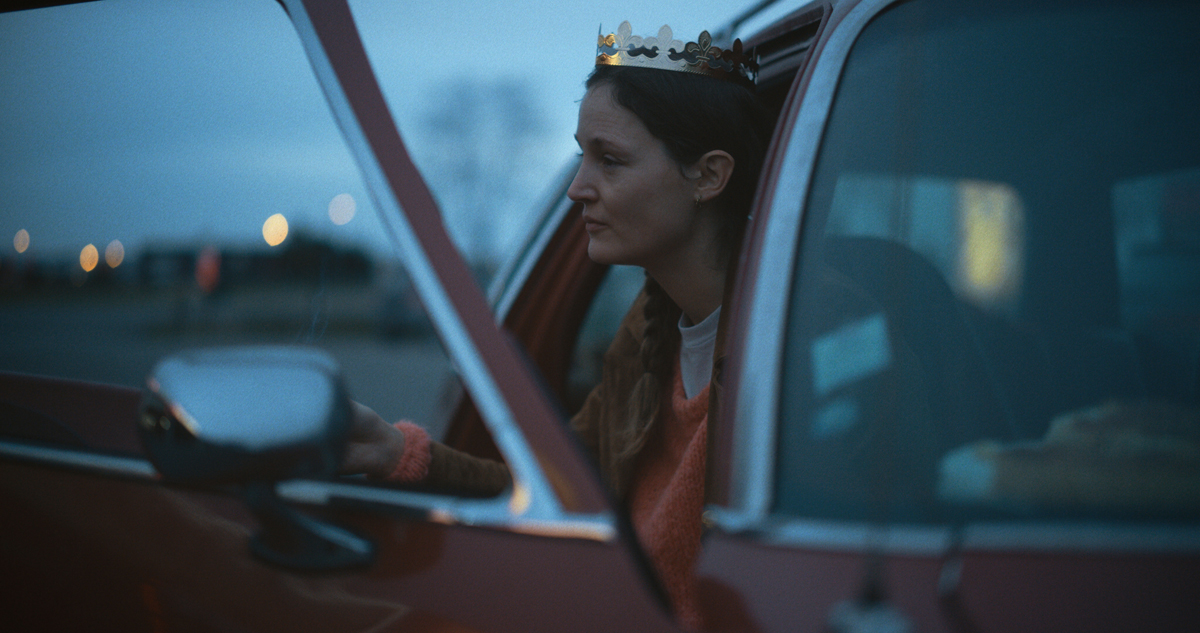 Hold Me Tight is also marked by a fascination with the encounter between reality and fantasy, and it unfolds, like The Blue Room and Barbara, as a collection of scenes plucked from memory and scattered nonchronologically, like rose petals—a poetic effect achieved by Amalric’s regular editor, François Gédigier, whose enigmatic orchestration of the events positions us as detectives searching for clues, feeling for solid ground. This dynamic is announced at the start of the film: Clarisse (Vicky Krieps) gathers dozens of Polaroids and, with startling force, slaps them down on her bed while muttering “let’s start again” like a kind of a prayer—or a spell—intimating things to come.

Yet the film, based on a play by Claudine Galea, is also a departure from Amalric’s past work. For one, he remains entirely offscreen. Clarisse is at the center of this universe, and her efforts to quell the hurt of monumental loss—the call to “start again”—are the film’s structuring principles. There are no neatly demarcated flashbacks, no clarifications as to what is real and what isn’t. Amalric makes manifest Clarisse’s mind-screen, putting us on a more tenebrous, elusive path than one aimed at discovering mere causes and events. 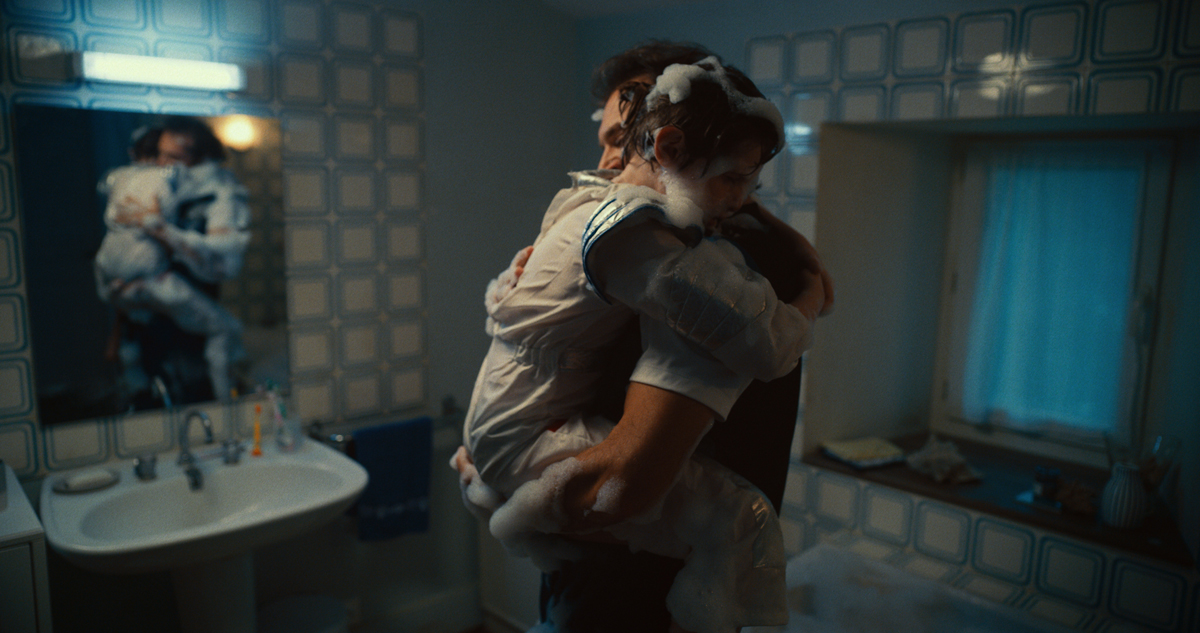 Sacha Ardilly as Paul and Arieh Worthalter as Marc in Hold Me Tight. Courtesy Kino Lorber.

Clarisse, at first, appears to run away from home, leaving her husband, Marc (Arieh Worthalter), to fend for himself and their children as she peels off to pursue road-movie antics typical of a hot-mess woman’s pursuit of freedom. Apparently, in this other life of hers, she downs shots in between shifts at her translation gig, flirts uninhibitedly with random men, and stumbles around public places in drunken delirium, even plunging her face into a tub of ice at a fish market. Driving around in a burnt-orange AMC Pacer, she envisions her family at home and magically feeds good-parenting advice into her husband’s ear. Amalric and cinematographer Christophe Beaucarne cut between Clarisse on the road, often speaking her instructions aloud, and her family’s spats, struggles, and triumphs—her pianist daughter, for instance, goes from playing mere scales to Beethoven and Debussy. 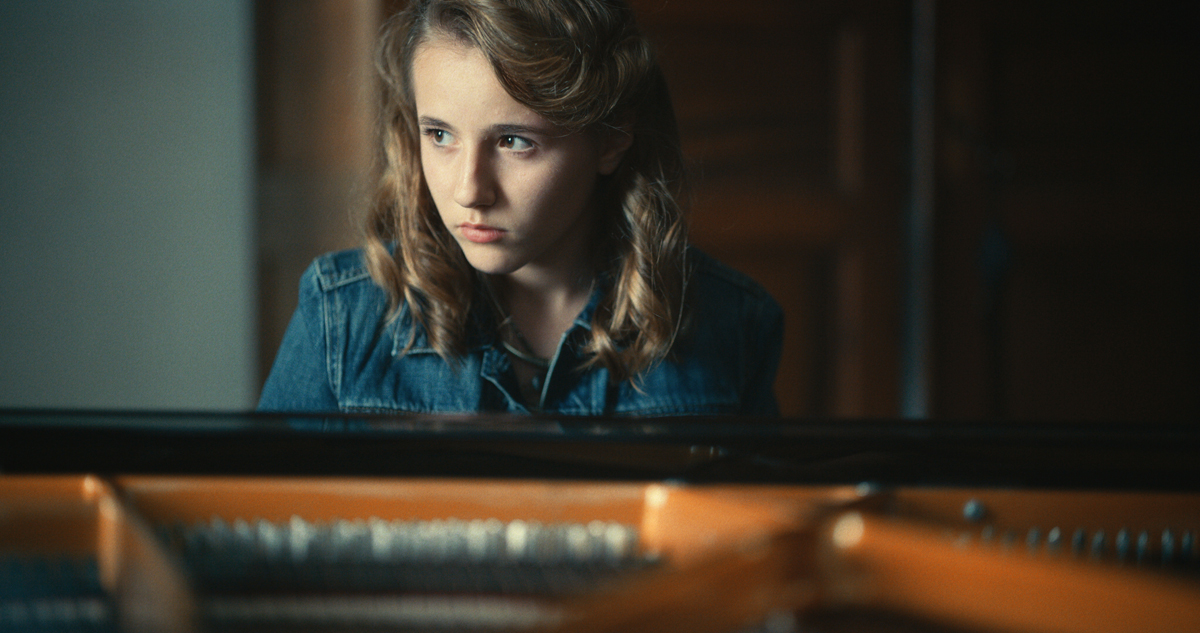 Midway through the film, certain seemingly banal images that had been relegated to the backdrop of Clarisse’s visions—a pair of skis in the garage, a televised news report of a ski-resort disaster that she catches out of the corner of her eye at a bar—take on calamitous meaning, putting everything we’ve seen up until then into perspective: Marc and the kids have been killed in an avalanche, their bodies trapped deep below layers of ice and snow, forcing Clarisse and the local rescue team to wait for the spring thaw to retrieve the corpses. 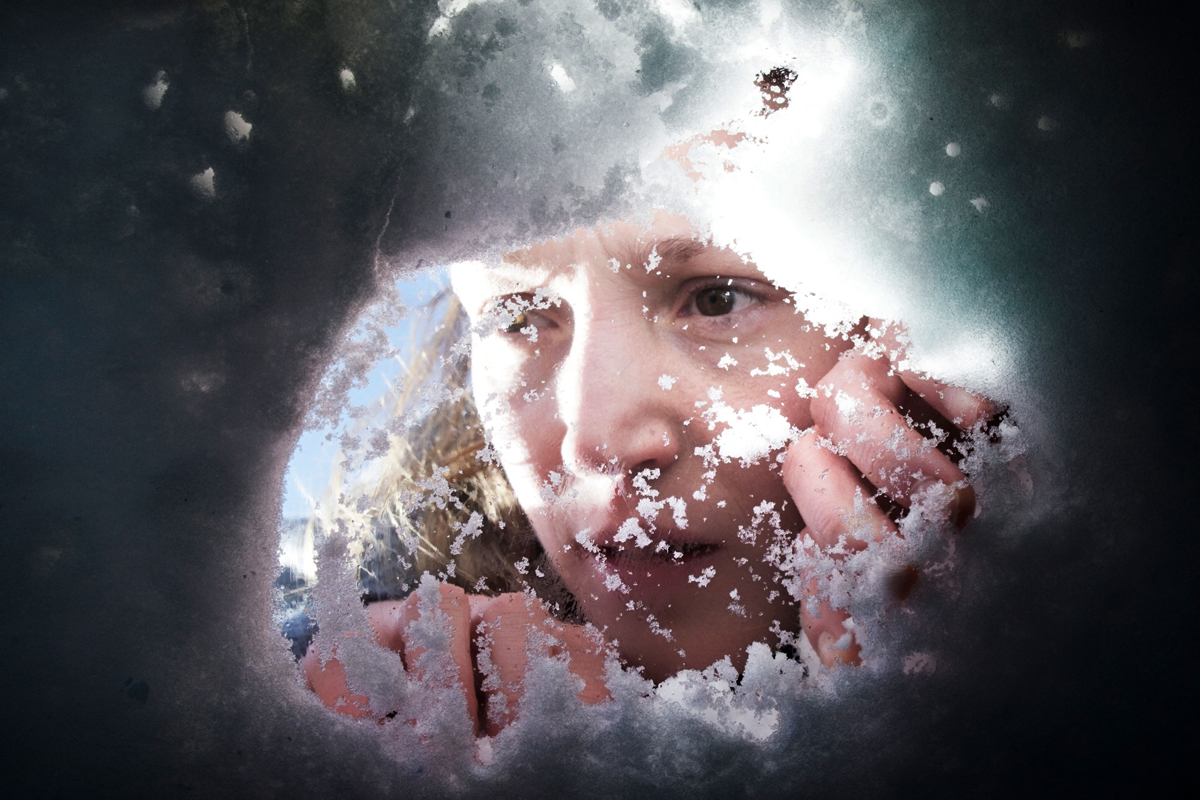 A few recent films have taken—in increasingly standardized, vacuous ways—the woman in mourning or otherwise shaken by trauma as a dramatic showcase explicitly tipped toward her empowerment. (Kornél Mundruczó’s Pieces of a Woman is the most egregious example, though Fatih Akin’s miserabilist revenge thriller, In the Fade, is a close runner-up, with Maggie Gyllenhaal’s The Lost Daughter, while a cut above those two films, still trading in the quasi-profundity of maternal guilt.) Hold Me Tight doesn’t assume a totally different posture—Krieps performs the requisite moments of dead-inside-ness and indulges in reckless behavior because nothing matters. She lets out a guttural scream when the bodies are found and several times must be chased after or carried off by concerned bystanders when she drifts from reality.

Yet in a film where emotional texture prevails over narrative obligation, these occasional clichés don’t produce the same tedium, in part because they coexist, indistinguishably, in the same dimension as fantasy. Dreams and reality overlap, poke holes in and inform one another. Over time, it becomes clear that Clarisse has hit the road as a delusional coping mechanism: she leaves home so that she is the absent one, allowing her family to live on in the refuge of her imagination. As time passes and as Clarisse’s children grow older in her mental projections, the images break with realism in more obvious ways: her daughter dons a gray wig in the guise of a famous pianist and, eventually, takes the form of a teenage girl with different parents. 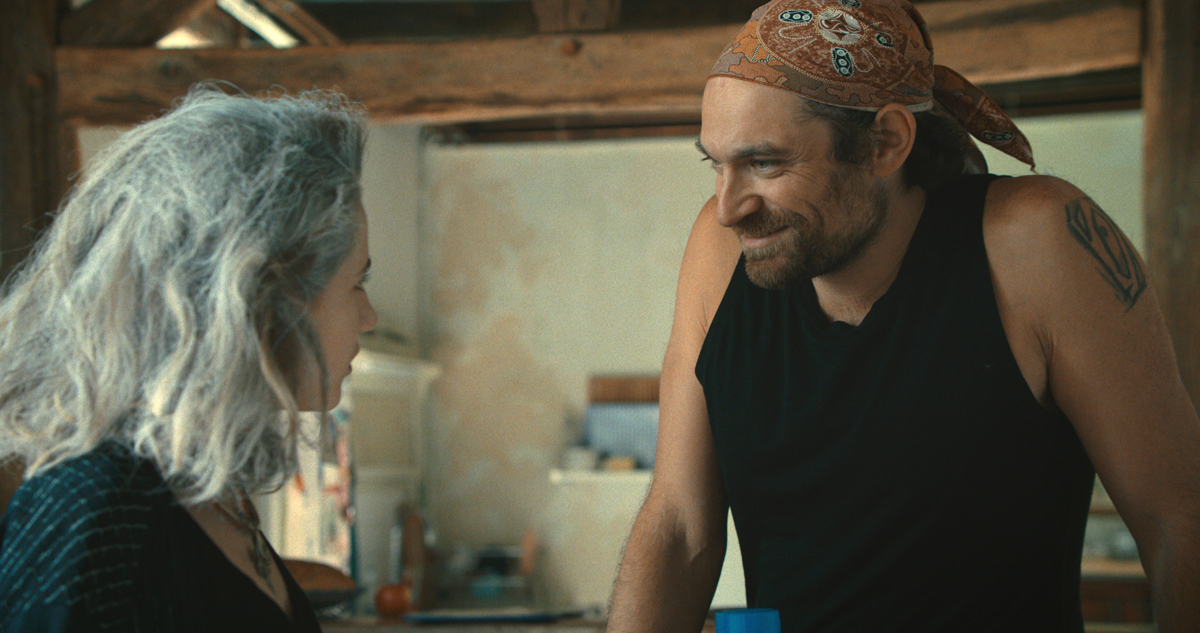 There is a great allure to the beautiful woman in tatters, who, through her grief, her madness, seizes control of the filmic world she inhabits, sucking us into her orbit, where we merge with her memories, her brokenness, and her dreams of what could have been. I think of Jeanne Moreau in Elevator to the Gallows (1958), who is practically zombified as she wanders the streets of Paris drenched in rain and lovelorn misery; Juliette Binoche in a neck brace, chugging a bottle of pills, a void personified in Three Colors: Blue (1993); Charlotte Rampling, who in Under the Sand (2000) denies her husband’s death with a kind of delusion that approaches arrogance; and Charlotte Gainsbourg, that scissors-toting whirling dervish of despair in Antichrist (2009). 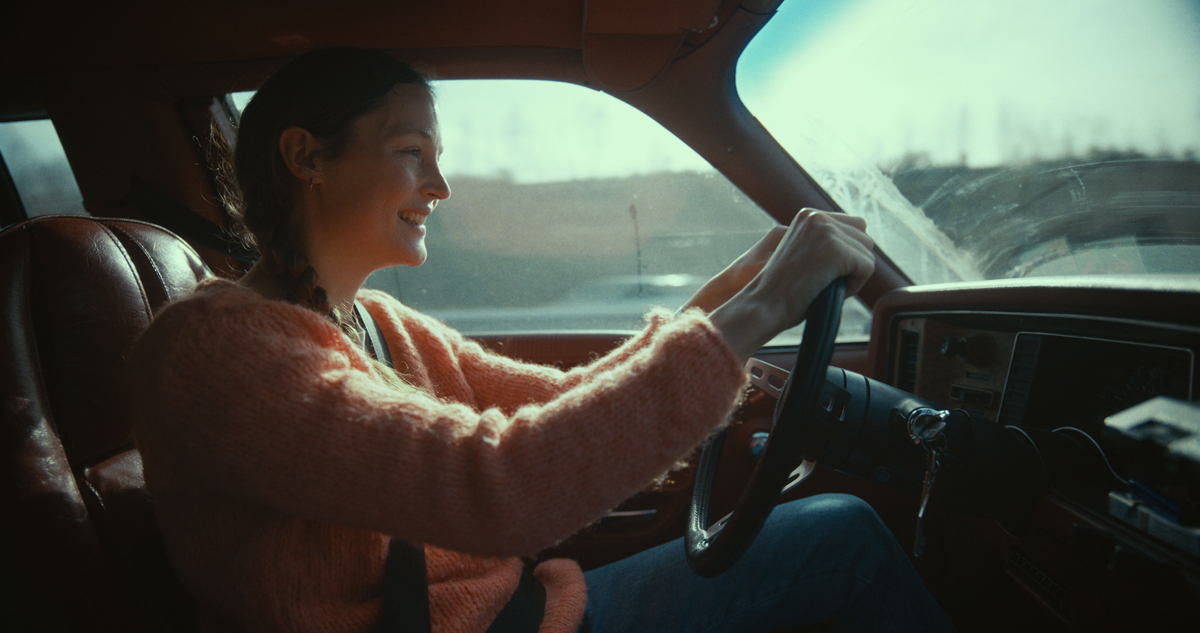 I mention these performances because they exert a gravitational pull on the films, with the actresses reaching a formidable position of coauthorship. Krieps’s Clarisse also exerts such a pull. To be on her wavelength is to be drawn into her chaos and devastation, but Clarisse is not all doom and gloom. She has a sense of mischief about her, which renders her dreamworld a defiant psychic gesture tinged with a childlike petulance. There is madness in her eyes, in the way her jaw clenches and her lips flatten, suggesting a bite without teeth. However damaged, this woman does not surrender the capacity for play that is the bedrock of her singular intelligence. Throughout the film, we glimpse an oil painting, modeled after the photorealist portraits of Robert Bechtle, of a woman in sunglasses seated next to her children. Is the woman Clarisse? Her slight smile tells us yes.

Beatrice Loayza is the associate web editor at the Criterion Collection. She is a film critic for the New York Times and a contributor to Film Comment, Cinema Scope, the Baffler, and other publications.