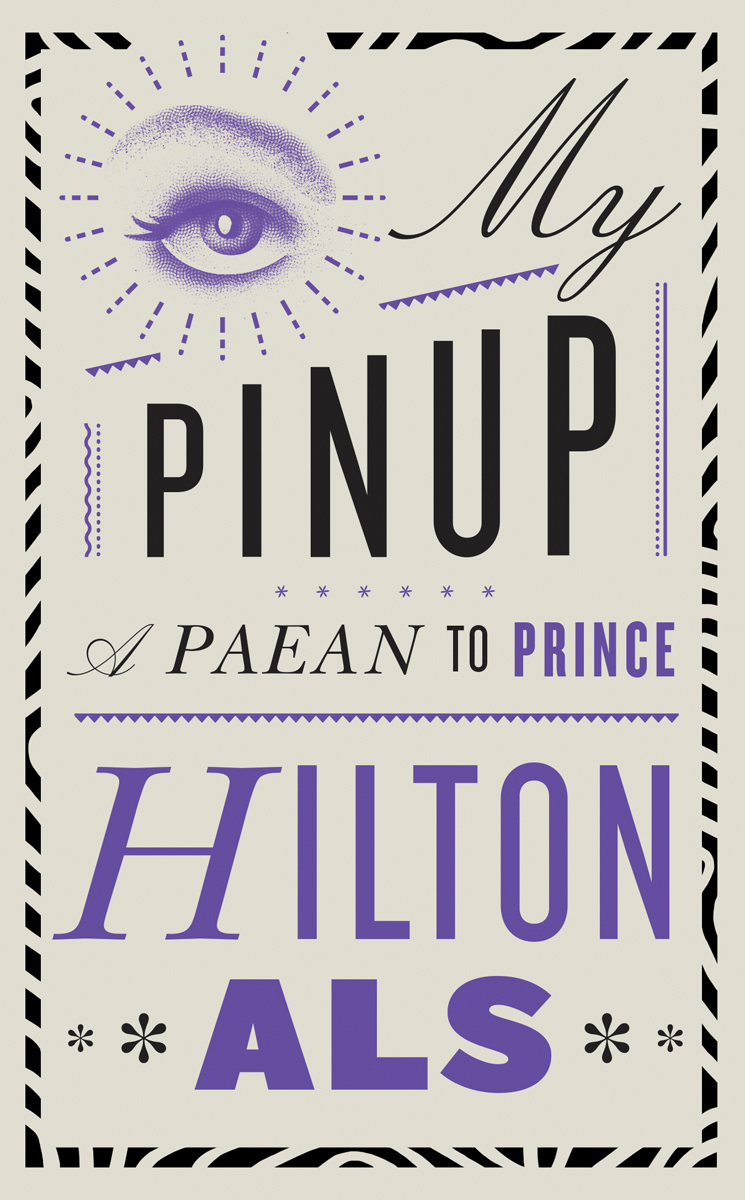 Prince didn’t really make love songs, and his wasn’t exactly music for fucking. It was music that replicated the particular pressure that mounts in your chest when stuck in a conversation at a party while catching someone else’s eyes across the room, knowing they can see what’s playing across the screen of your mind, can feel some phantom trace of your hand like you do theirs. It’s music for idées fixes, where the ideas are lips or the line of skin just beyond a hem. It’s about being made weak for and making weak. Long nights pass this way—cool, stylish, desperate—until you are near enough for one of you to beg “let’s go home, let’s go crazy.”

Hilton Als’s new book, My Pinup, is concerned with Als’s past selves and past loves, refracted through and tested against the pop icon. The memoir weaves between accounts of and encounters with Prince, as well as two boyfriends—the first white, a later one “colored”—who cannot be separated in Als’s mind from the mysteries embodied in the singer. Much of the writer’s work pulls at the knot of sex, gender, and race. Barring a great rupture, these things can’t be definitively unwound. It makes for a world of difficult loves and lovers.

Als recalls detecting some measure of resentment in the white boyfriend with whom he attended a Prince concert in 1988. How dare the musician shine so brightly when there was “a white queer (or straight) man sitting here, the natural custodian of the world’s attention?” Cutting as the line is, I’m not sure this was exactly true, even in the Lovesexy era. The sweat-drenched attention-grabbers had, for some time, been black, and even when they weren’t, where had the white ones learned their moves? White boys have spent the last several generations shaking their hips, trying to find a way to blackness without blacks. Our stars have had their attention, maybe too much of it, it’s just that they have almost never had their care.

Als’s book is also about care: trying to care for the superstar, trying to and trying to not care for his lovers, and, through that care, trying to craft a self. How do you make such a thing? Out of your body, for one; out of the ways you give it up and take it back. He moves haltingly, writing that he “inched closer,” “tried—clumsily—to climb on top of him,” “rubbed against him, but I moved away right quick.” Or, you can discover what you should not do that you will do anyway. Als brings a peach pie to that concert—baking as a demonstration of love—but, he writes, it “grew sticky in my lap.” The boyfriend refuses it. A pie does seem too difficult a meal for a funk show. Where desire is concerned we always bring too much of ourselves, or more than we mean to, anyway.

The love is fuller with the second boyfriend. Als recounts these memories by addressing Prince, who stands for both himself and the beloved. “Already he was you, Prince, in my mind,” Als writes. “He had the same coloring, and the same loneliness I wanted to fill with my admiration.” They are not haunted by racial discord, but, in addition to all the normal difficulties, they are threatened by the external pressures that try to eradicate the beauty of two “colored boys together.” Als is left with a “pure and not so simple” love that makes him feel like “a sad bug crawling in the folds of his Princelike harem pants.” He is left exposed.

What Prince had—and, by comparison, no one else has ever had—was style, by which I mean insolence, which offers its own kind of protection. He could show his ass (a high compliment). This was something Als learned to do “through language.” It was defiance through prowess. Prince wore halter tops like he invented them, flirted with racial indecipherability, wished he were his girlfriend’s girlfriend, and refused to learn his place in the industry’s hierarchy. Having never possessed the body of a traditional sex symbol, he dominated through technique instead of mass. His legs could strut, his ass could swing, his fingers fluttered along taut strings, and his mouth, his throat, could wail in that tone so pained, so pleased, so laced with shame and excited by its own excess that it could only ever be the sound of sex, especially when he said the name “God.” On “Anna Stesia,” he tries to cast sex as a temporary anesthetic for an existential ache. But when you want to say sex is bad, you make it sound bad. To me, he sounds more like a latter-day Saint Teresa, penetrated by an angel’s golden spear, left “satisfied now with nothing less than” the divine. But then the great mystery of the church is that the Lord was made flesh. What is holy has to be sought through the body. Grant me chastity, the singer and the saint say, but wait just a minute. Grant me a gasp, a hand clutched too tight, grant me everything and then tomorrow I will get down on my knees.

Black music, perhaps black life, has always been caught in this “admixture of the sacred (gospel) and the profane (sex).” In Als’s eyes, Prince was oscillating between where he had taken black music and where it had already been—“fundamentally Christian, blues-inflected, [and] conservative.” He forsook “twisted righteousness” for men he might have hated in the “world of corporate politics,” but whom he also “admired for what they had: power.” My Pinup is at its best when it pursues this disavowed desire. Als demonstrates throughout that a whiter life, a straighter life, a more religious life, may be anathema to the radical promise of black or queer life, but it has its seductive qualities. The knot slips tighter.

This kind of power affords carelessness with other people and their love. Those of us who have idolized Prince have probably followed in his footsteps. Maybe we can’t play guitar like him, but we can fix pain and pride into a reserve more becoming than a broken heart. So we make thistles of ourselves, promising honey with work, but in the meantime achieving only a concatenation of blooms and spines. It is as though beneath every line about tongues or mirrors, Prince whispered “touch me not.”

This frustrated eroticism defines the relationship between the star and fan. We are so subsumed that our sense of self is littered with fragments of the star’s way of being. Als writes that, like Prince, “old loves keep me alive by forcing my hand, which writes lines like these.” While he can never quite reach the singer, he can recast his past in the star’s light. Onstage, Prince was really seducing himself; you could only watch. There is a thrill in that, too. That irreducible gap only invites greater identification. “Find yourself in me” is a pleasurable species of egoism, one that drives the pop star, the memoir, the pillow talk of the witching hours. But “find” can tip to “lose.” Singers sway and we fall; authors set down memories and so transform their people into characters. Fans and flames become subordinate to a star’s music, prose, charm. There may be no way out of their thrall. Be careful, then, whose lines you take in your mouth, whose bed you slip into. Between two lovers, the writer always gets the last word.