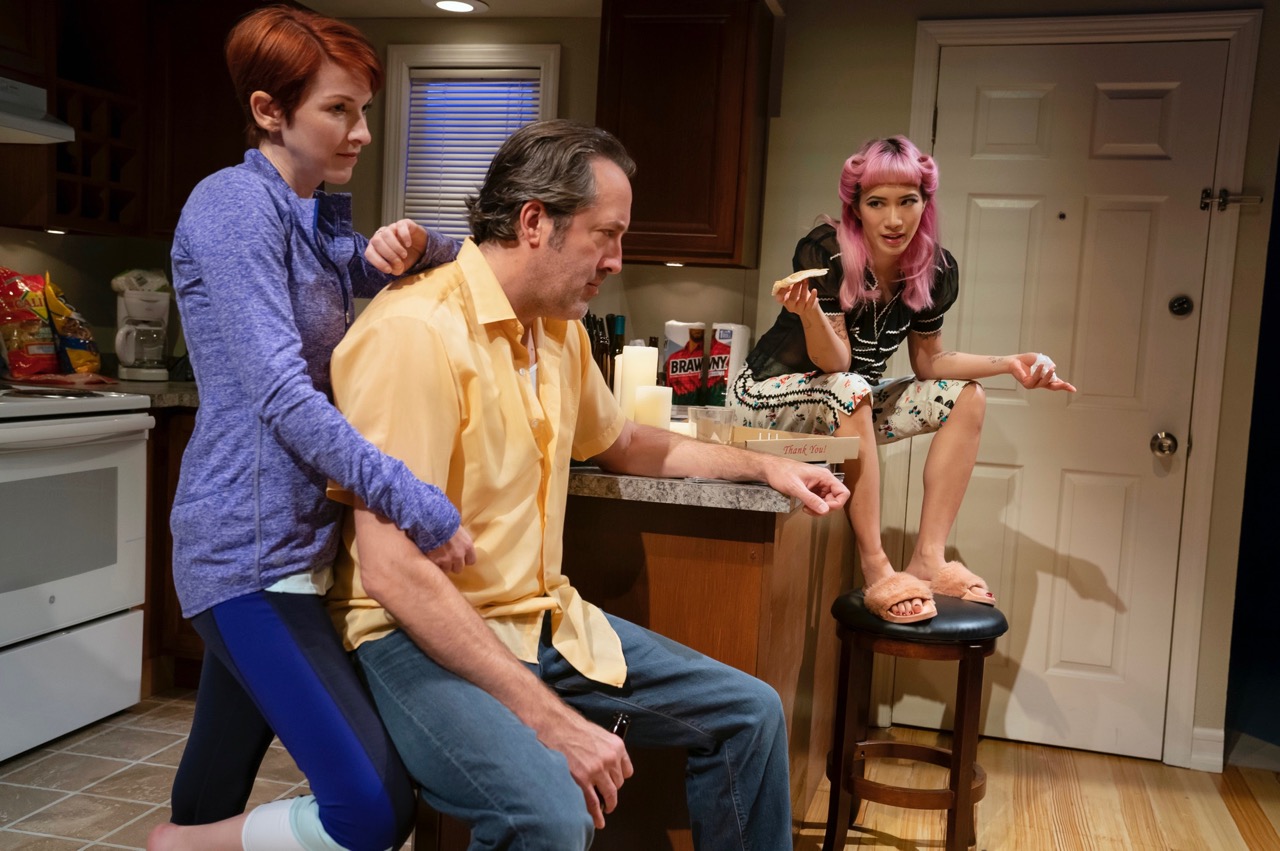 I feel a little wary writing about Linda Vista, the Tracy Letts play now on Broadway. It seems like a trap for the feminist critic. Here dangles a lengthy comic drama about a fifty-year-old divorced man grumbling at life while getting tons of sex and ego-stroking from hot young babes. Am I—being baited? Something about it looks like a hook.

But art, as one of Letts’s characters says, is “a catalyst for seeing beyond yourself.” Maybe there’s more to the horndog picaresque than Updike and Roth and Amis and Bellow and the rest have already discovered. And Letts has written so much that’s grand: Shepard-manqué thrillers like Bug and Killer Joe; his Gothic family drama August: Osage County; the woman-through-her-ages epic Mary Page Marlowe, which contained scenes of vivid generosity. As a performer, he’s a quiet guy with gunpowder behind his glasses—talented on stage (a slow-burning George in Who’s Afraid of Virginia Woolf?) and screen (Lady Bird, The Post). He writes lavishly for other actors: monologues, quips, confessions, triumphant assertions, drunk scenes, fights . . . he gives with both hands.

So for the first several scenes of Linda Vista, I would shake myself whenever I entertained creepy thoughts such as this seems like a sitcom for pissed-off dads. 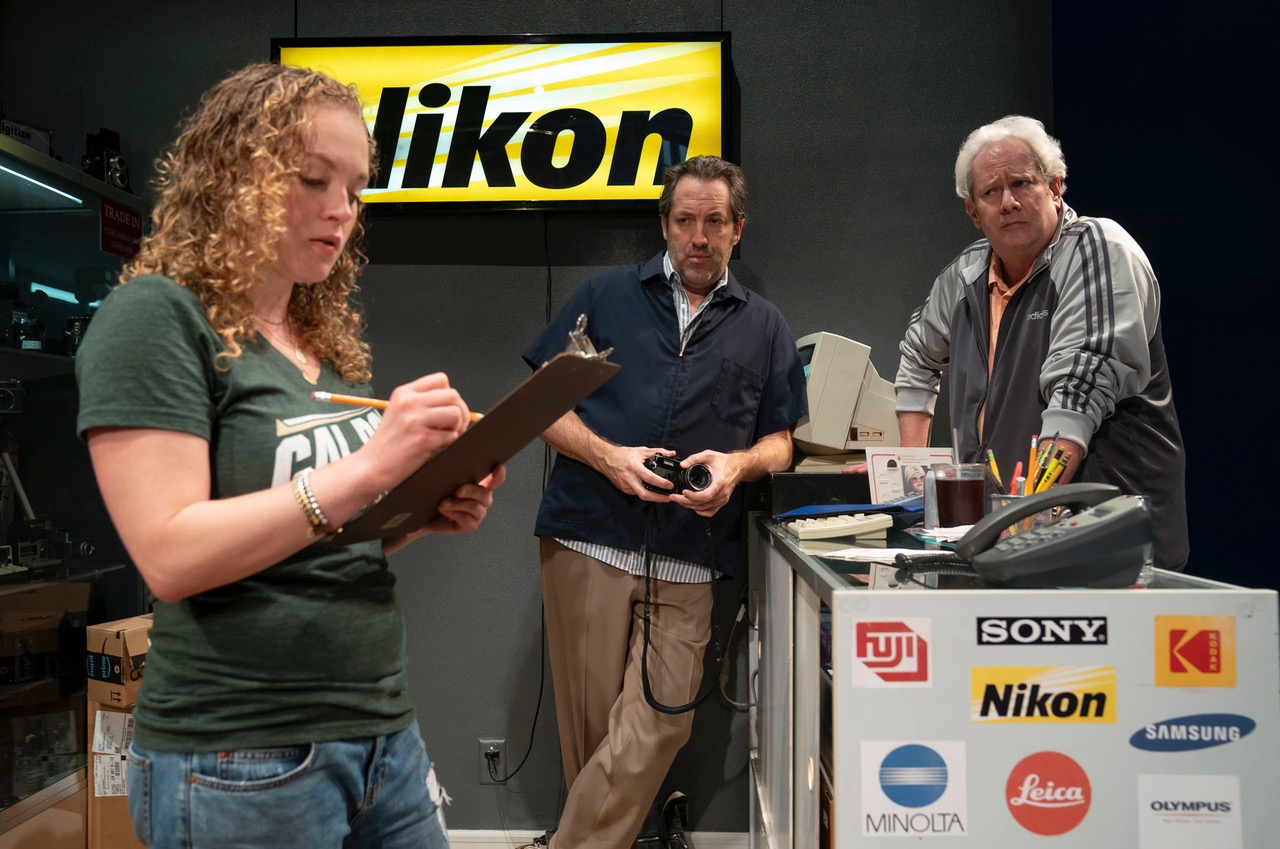 Before the play begins, we watch our antihero Wheeler (Ian Barford) and his buddy Paul (Jim True-Frost) haul boxes into a beige two-bedroom apartment in San Diego. Wheeler is moving to blandsville because his slow-rolling divorce has finally dropped him off there—a glacier depositing a boulder.

Is Wheeler complicated? Oh yes, in all the expected ways. He loves his son (never seen) and ignores him. He repairs cameras at a camera shop run by the vile Michael (Troy West) and staffed by the lost-but-plucky Anita (Caroline Neff), and we wonder if he’ll ever buck up enough to defend Anita against Michael’s harassment. (Wheeler obsesses about her breasts too, but only when her back is turned.) He’s self-lacerating yet swaggering, so he admits his flaws in ways that win him admiration. He’s the sort of guy who thinks comic book movies are crap and who prefers “Fellini and Antonioni and Ingmar Bergman. And Stanley Motherfuckin’ Kubrick.” He rants this at Minnie (Chantal Thuy), a millennial he meets in a bar, who mocks him but also gives him the reluctant nod of approval. He later issues a nearly identical edict on music. Call him crazy, but he still believes in jazz. 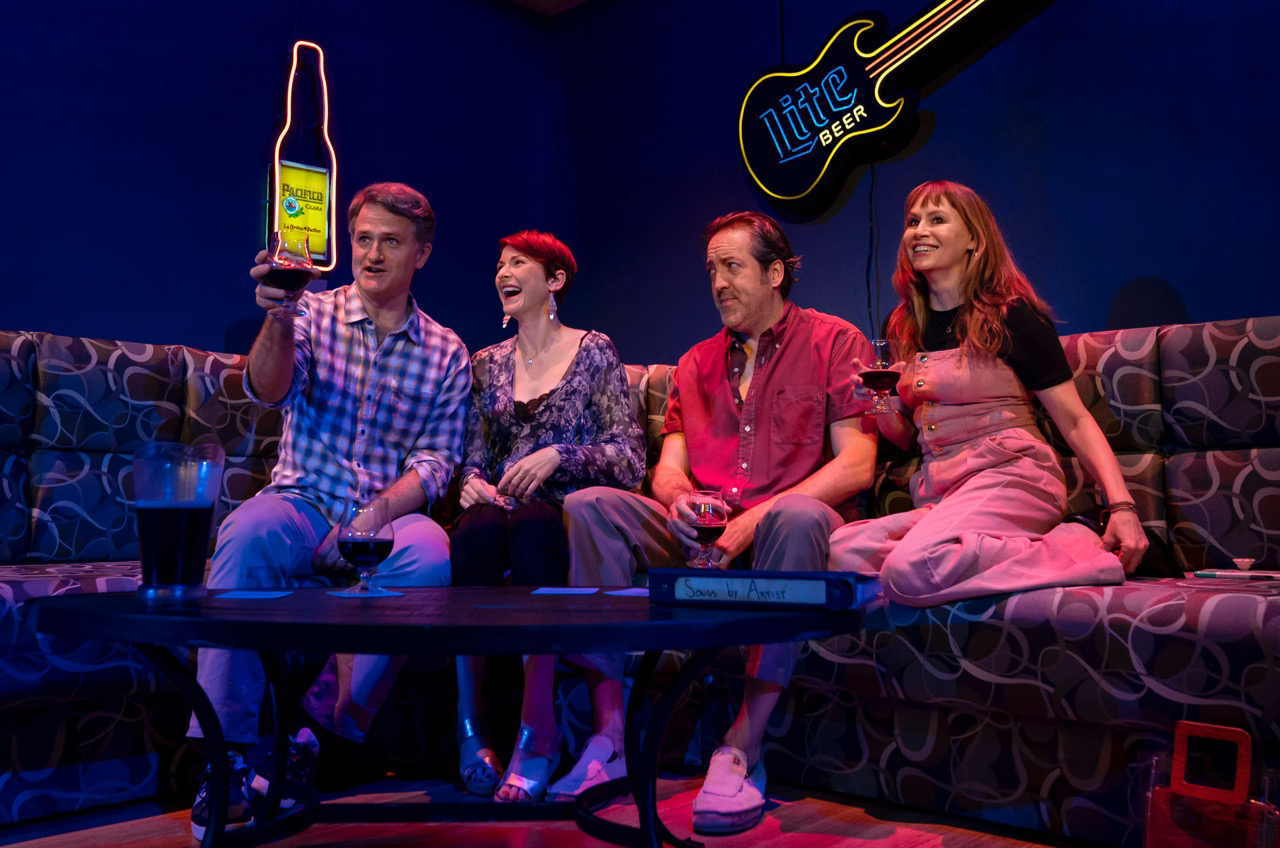 Paul and his wife, Margaret (Sally Murphy), set Wheeler up on a date with Jules (Cora Vander Broek), who is a life coach, but Wheeler—alone of everyone in 2019—has never heard of a life coach because Letts needs him to do some shtick.

And through the two hours and forty minutes of the show, the audience laughed at jokes of roughly this caliber. (Though a few are good, including a bit that Paul does on deathbeds.) Wheeler, whose friends tee up lines so he can say something verbose and wry, does a little setting up here himself: very early on, he makes a Trump joke to ensure the audience is on his side. “The problem with these racist cocksuckers,” Barford snarls, “isn’t that they’re doing too much OxyContin, it’s that they need to do a whole lot more.” The applause the night I saw it almost stopped the show. There’s a lot of explicit sex in Linda Vista, with full frontal everything, but the play still seems to have been written for the multi-camera comedy treatment. It’s built on those old bones: repetitive rhythms, an airless world made out of just a few locations, punchlines, a disregard for financial realities, the insistence on the women’s poreless beauty. Imagine if Everybody Loves Raymond had been made by HBO. Ratings gold. 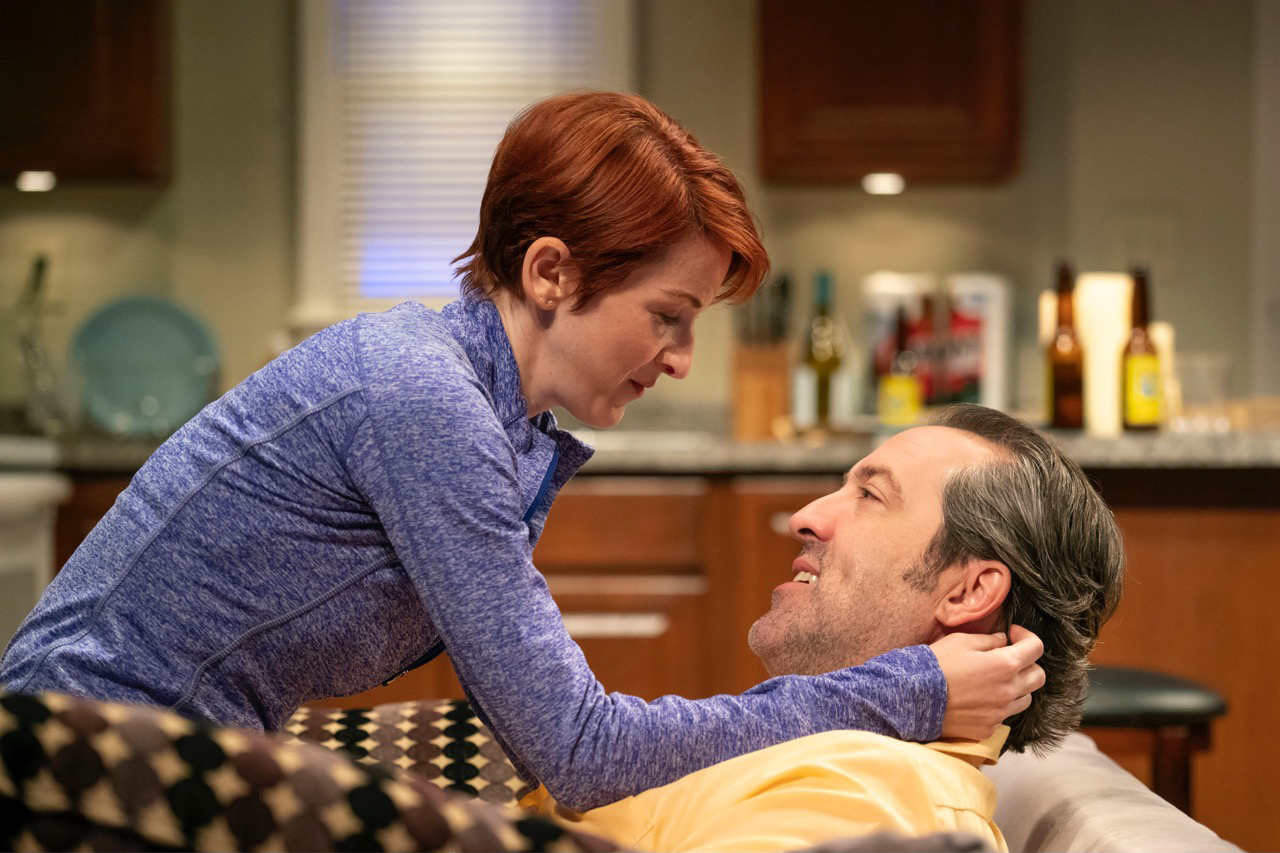 Letts can write dialogue, he can write fights. He writes viciousness particularly well. Like Updike et al., he issues little punishments to his main character—humiliations wait for Wheeler everywhere. But though Wheeler is often defeated, in one crucial way he’s a king: every woman wants him. (That’s what gives the whole show an icky sheen of wish-fulfillment.) When Anita turns Wheeler down for a date, she hastens to assure him that it’s only because she’s going through a tricky time, and we’ll see her drawn into his orbit by the play’s end. Jules (“age-appropriate” at only twelve years his junior) falls in love with his black-hole self-absorption; hip twentysomething Minnie, who initially bristles at him, can’t resist either. Even Margaret, Paul’s wife, dated him in college. The universe is populated with (1) men and (2) women who have slept, sleep, or will sleep with Wheeler. 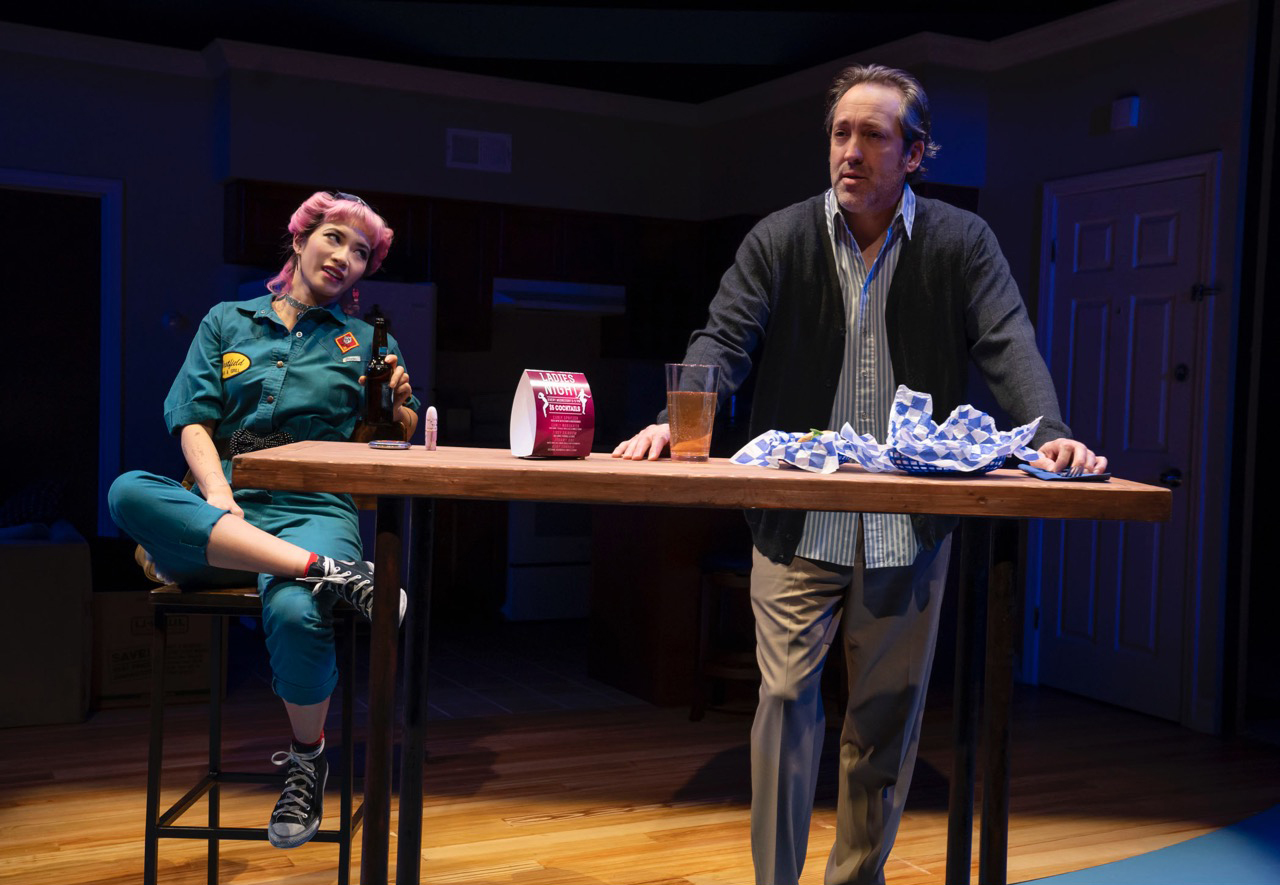 Director Dexter Bullard has brought the Steppenwolf production mainly intact from Chicago, and occasionally we get to marvel at that delightful house style. The aesthetic is big-shoulder acting, easy-in-your-body stuff. Barford must have been a joy to write for—he has a wonderful old-football-player’s shamble and a Charlton Heston torso, which he can kind of inflate when his dander is up. His big head, shaggy and slightly floating, seems to follow his body just a beat . . . too . . . late. When life really socks him one, Wheeler looks like a bear, trying to shake off the effects of a tranquilizer dart.

But the man that Letts has written isn’t a bear—he’s a narcissistic little toad who everyone, including his playwright, treats like a temporarily embarrassed lion. Here he is on the topic of his failed photography career, something that he later refuses to call an art . . . more a craft. (Pretension that apes humility is this guy’s sweet spot.) A photograph, Wheeler says, is light. “That’s all it is. It’s light. If you can express a personal vision by the capture of light, you’re an artist. If you can’t, you’re just another asshole pushing a button on your phone a hundred times a day. And please believe me when I tell you I am just another asshole.” 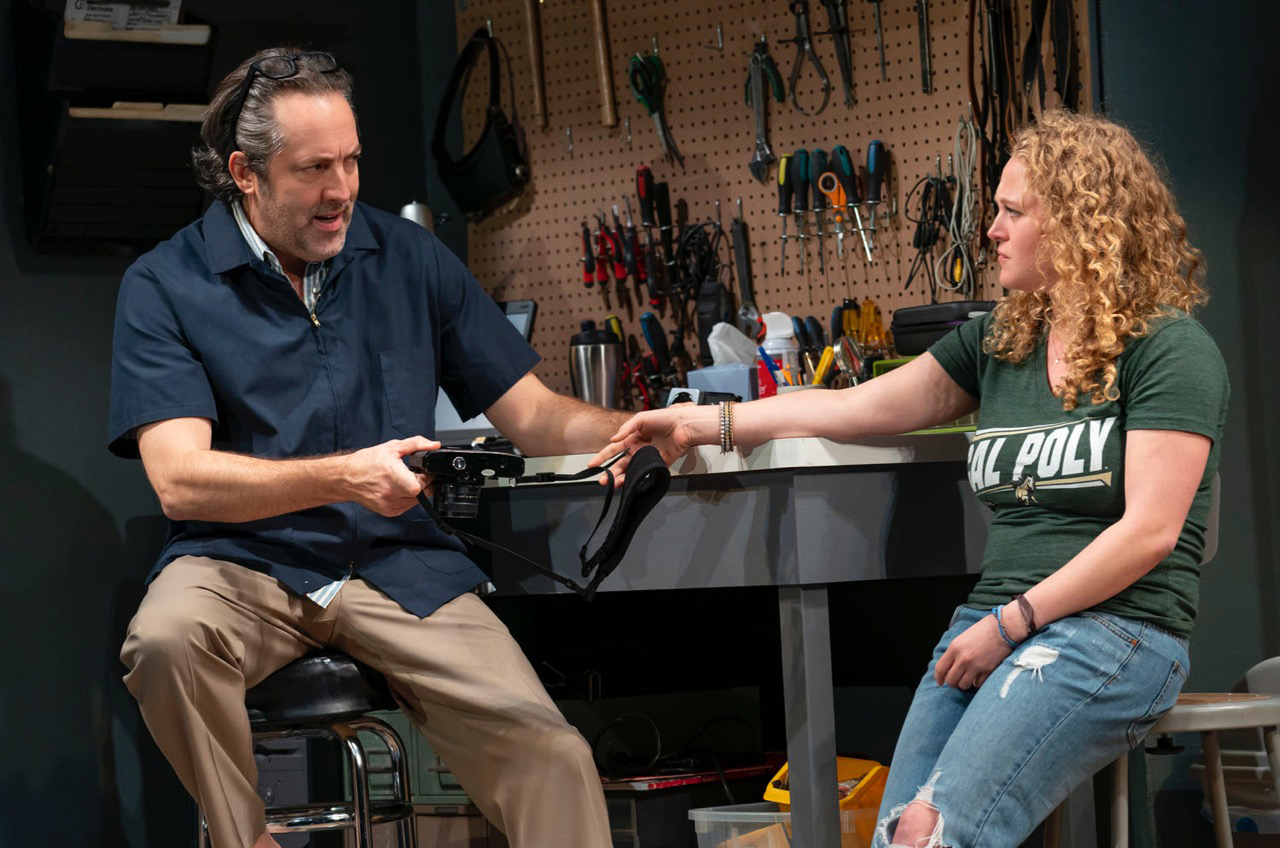 Now, the play has forty-five minutes to go from this point. Jules will get to yell satisfyingly at Wheeler, and various relationships will end. And full disclosure: people around me were loving it, responding mightily to Wheeler’s setbacks. I kept asking myself, as I sat in stony silence, is there a deeper game here? A way to really think about certain types of failure? But Wheeler is always the tallest, the funniest, the least likely to stay hurt.

And crucially, Wheeler’s unused talent—much referred to as something truly special—is the play’s trump card. Will he learn how to listen? No. Or make amends? No. Or respect a woman? No. Instead, the optimistic “he’ll be all right” ending has to do with his return to photography. Bullard and Letts both structure the final moments as redemptive ones, as Wheeler picks up a camera again and begins to try to “capture light.” That tells you a lot about what the creators believe about how a man heals. He’s just got to get back to the thing he’s great at! But the play would have been braver and truer if it had ended thirty pages earlier. There’s a lot of value, actually, in showing us someone who really is just another asshole.