Visual Art
She Who Wrote 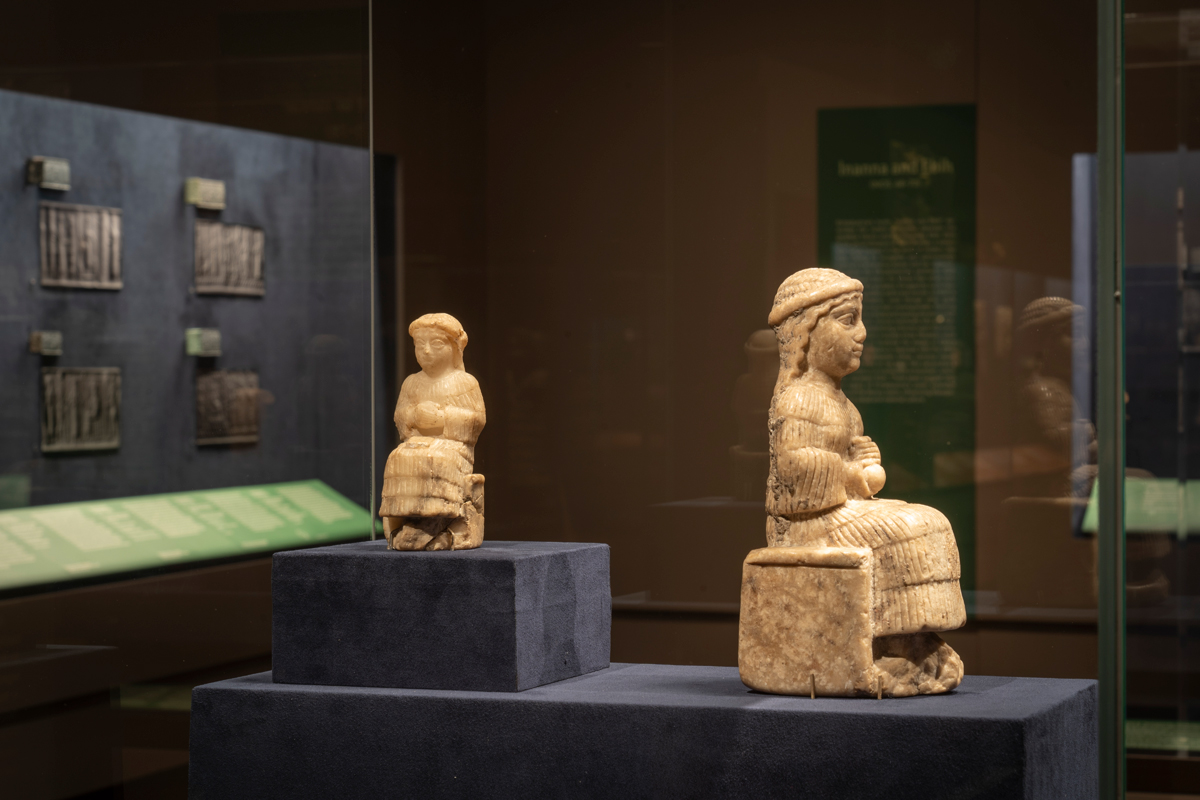 She Who Wrote: Enheduanna and Women of Mesopotamia, ca. 3400–2000 BC, installation view. Courtesy the Morgan Library & Museum.

I am Enheduanna. Let me speak to you my prayer.

These two simple lines, written over four thousand years ago, gave me the shivers when I read them at the Morgan Library & Museum’s She Who Wrote: Enheduanna and Women of Mesopotamia, ca. 3400–2000 BC. That their words are so plain makes what they are doing all the more extraordinary: this is the first example of the autobiographical I in the history of literature. It’s an I deployed by a woman recounting a violent assault—and appealing to a goddess to avenge her against the man who hurt her. 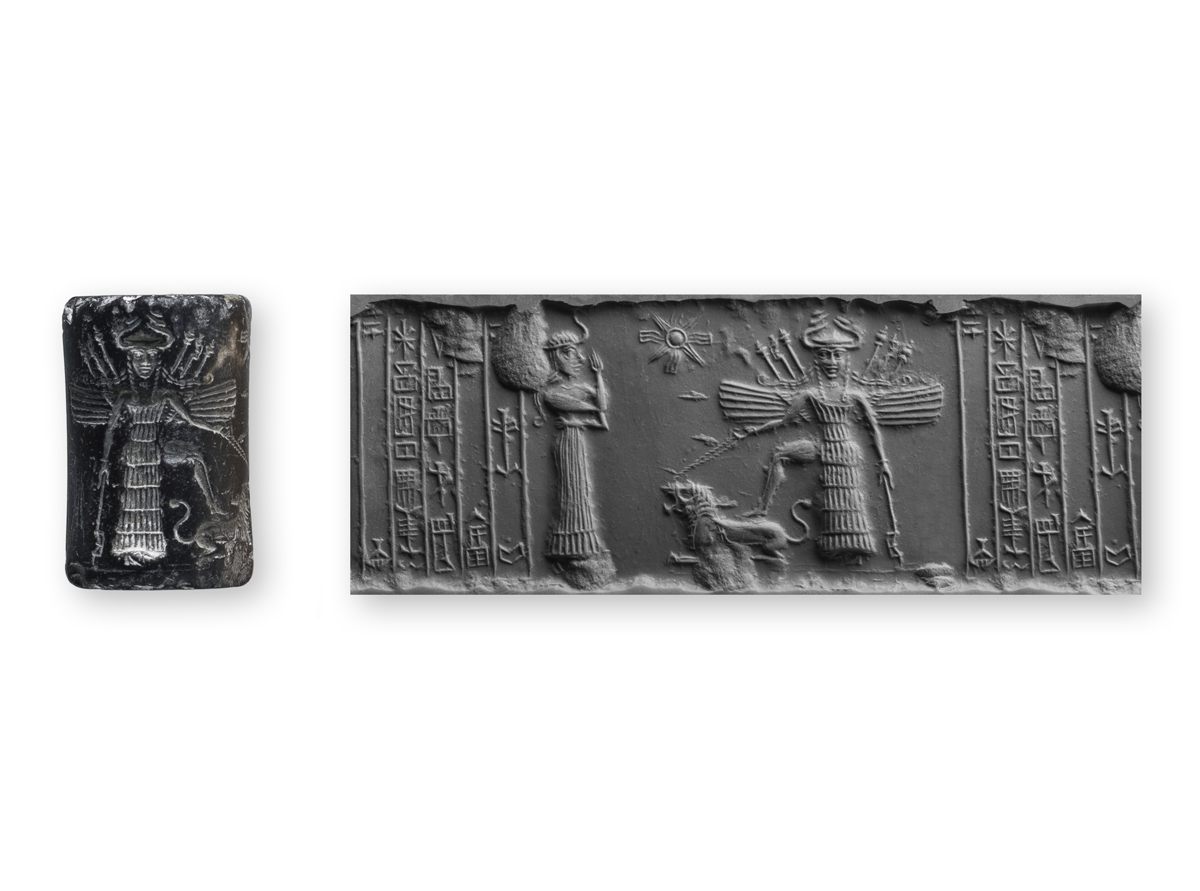 Cylinder seal (and modern impression) with goddesses Ninishkun and Ishtar, Mesopotamia, Akkadian period (ca. 2334–2154 BC). Courtesy the Oriental Institute of the University of Chicago.

Before Enheduanna, all existing examples of ancient Mesopotamian literature were anonymously authored and anonymously transcribed. The emergence of this I, insisting this happened to me, is astonishing. The lines are from one of over forty poems attributed to Enheduanna’s name, which means something like “adornment of the sky”; its sign in cuneiform is a glimmering starburst. (She was the high priestess to the moon god in the city of Ur.) You can see this starburst radiating here and there on certain cylindrical seals and clay tablets at the Morgan, because after Enheduanna died, her name was copied, over and over, by scores of scribes, for hundreds of years, as they wrote out her poems, considered exemplars of classical literature long after her death. Since the early twentieth century, when she was rediscovered in an archaeological dig, European and American scholars have cast doubt on that name, skeptical that this woman could really be the world’s first named author. She Who Wrote barely acknowledges such doubts, so forceful is it in its conclusions, its convincing quest to give this ancient appellation a renewed luster. 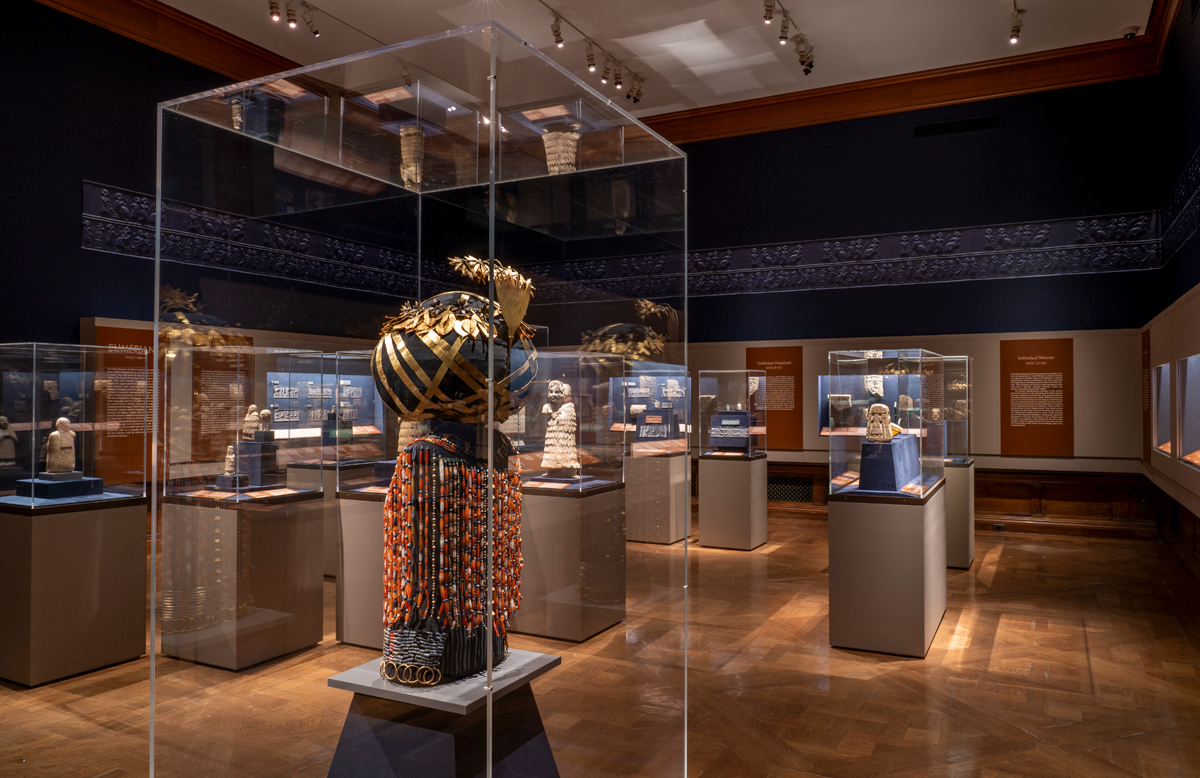 The exhibition, curated by Sidney Babcock (who has been working on this project, his last for the museum before retiring, for decades) with Erhan Tamur, is only partly about Enheduanna. Its overarching aim is to underscore how prominent women were in the public life of ancient Mesopotamia, which in turn makes a case for Enheduanna’s realness, by showing that her being such a thing as an author wouldn’t have been that unusual for the period. It is contained in a modestly sized room, packed into which, on plinths of varying heights, encased in glass, is a chorus of sculptural items, all representing women—votive figures, vessels, clay tablets—as well as a spectacular funerary costume belonging to a queen. The presentation is especially amazing because these items are displayed, often for the first time ever, fully in the round. (In fact, some of these items are on view at all for the first time ever, just now pulled out of museum drawers or storage rooms.) You can see how, even from behind, the bodies of these women are carefully modeled, their magnificent, thickly waved bundles of braids running down between their shoulder blades. From the front, they all have enormous, stylized eyes, originally inlaid with colored stone, that seem to whirl—they would have been hypnotizing peering out in the flickering dark of a temple. But some also have remarkably individualized facial features (a prominent nose, a round little chin) that suggest some sort of idea of portraiture. 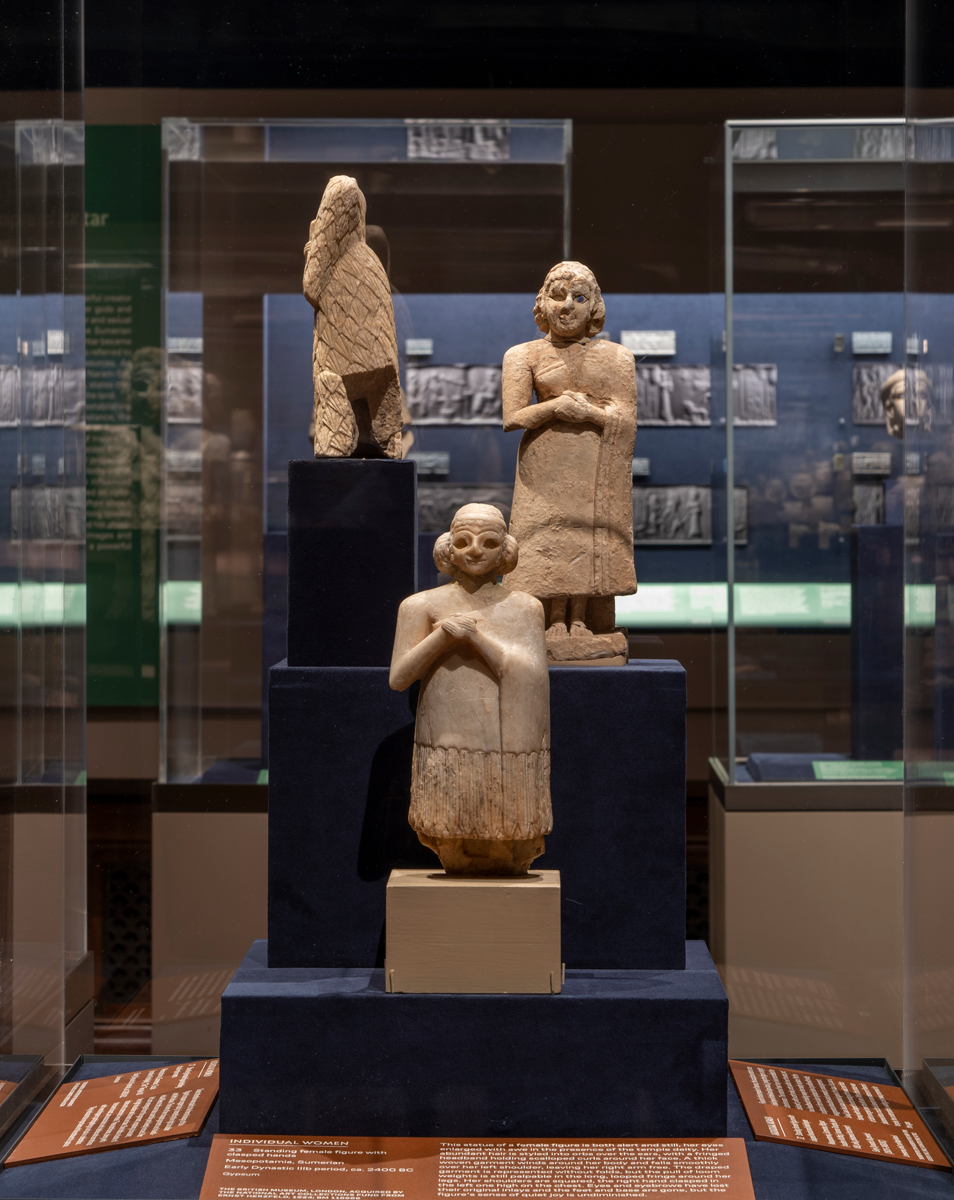 She Who Wrote: Enheduanna and Women of Mesopotamia, ca. 3400–2000 BC, installation view. Courtesy the Morgan Library & Museum.

The women depicted here are important women—goddesses, known by the horns on their heads; priestesses, known by the circlets in their hair; royalty and their attendants. (Most women did not live a very easy life in this place and time—a huge percentage of the female population was actually enslaved—but such women were not significant enough to be carved into stone, hence their absence from this exhibition.) A tiny figurine sits with a writing tablet in her lap. (A note from an old curator at the Berlin museum where it resides claims the meaning of this is unclear.) 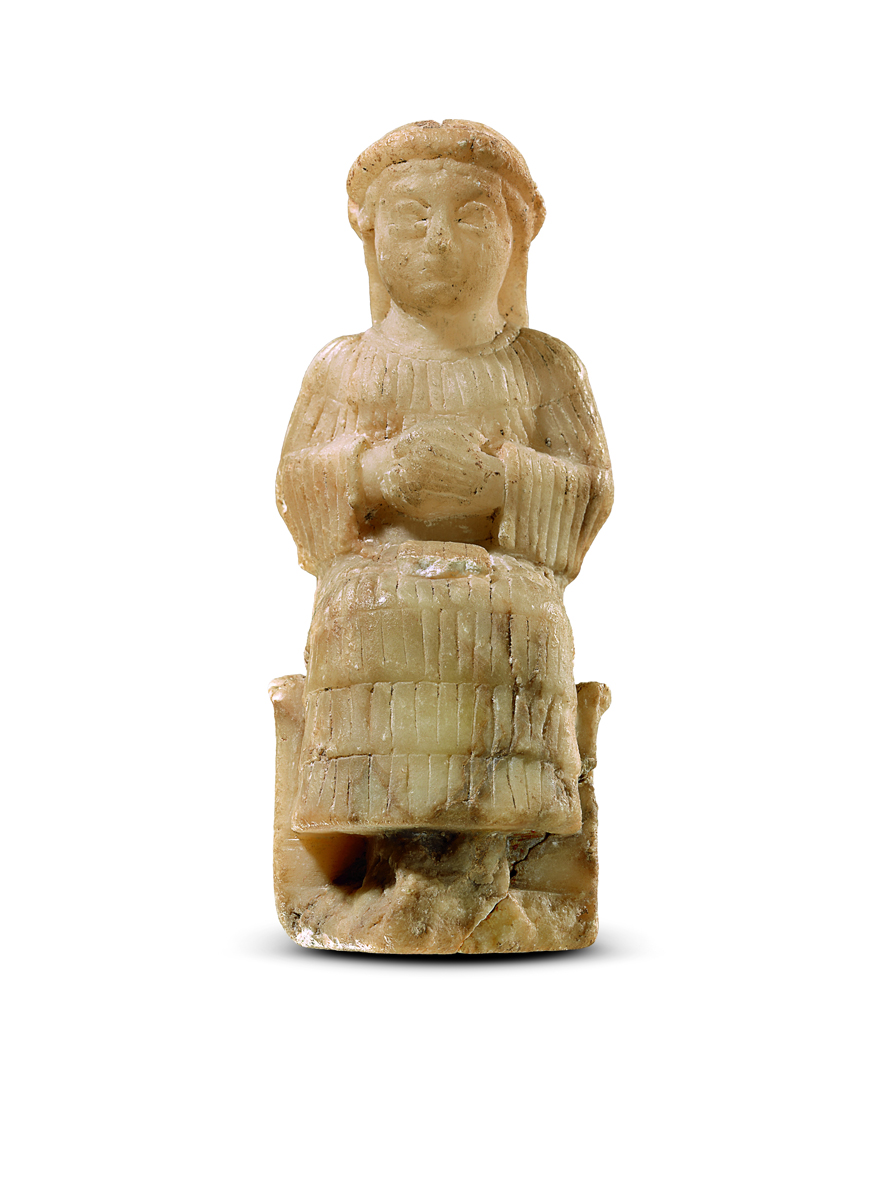 Babcock and Tamur plait this story of women’s importance in Mesopotamian society with another narrative thread: that of the development of one of the world’s first writing systems—Sumerian cuneiform. This is traced through several cylindrical seals (small, pendant-like items that could be worn as jewelry, but would also leave imprints in wax revealing tiny pictograms serving to authenticate documents or mark property, acting like a person’s signature today), the narrative sculpture of the Uruk vase, and the early writing used in accounting records. The two strands are closely related: as Mesopotamian cities grew at an exponential pace, women’s labor was as important economically and bureaucratically as the development of writing. This is where Enheduanna comes into the picture, about halfway through the show—some seven hundred years after writing’s invention, during which time it was primarily used for accounting, she was one of the first to put this system to a literary use. 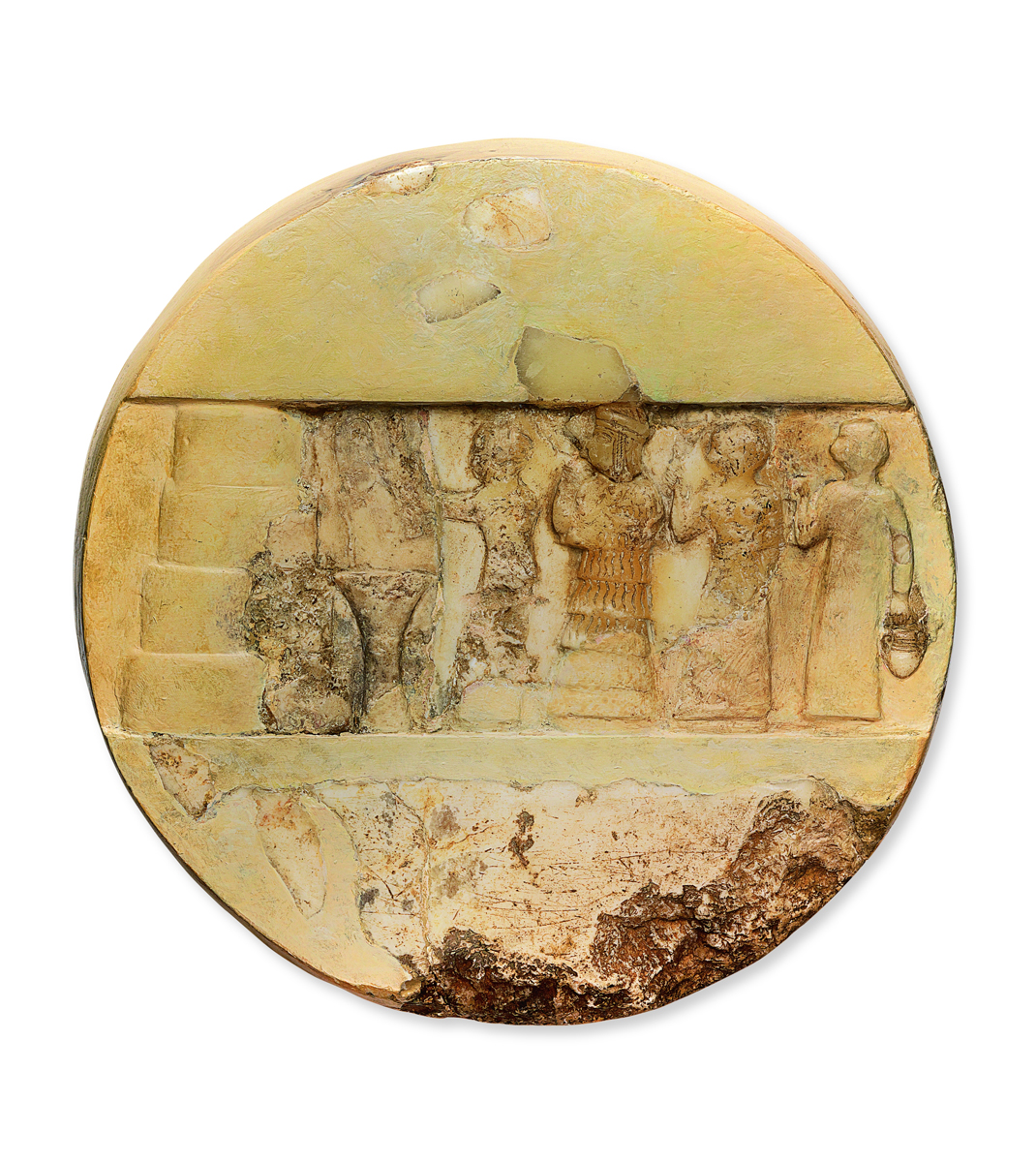 The terror and mystery and magic of this kind of writing, rooted in an oral tradition, is that it is a record of speech, an impression of speech; it is a kind of speech for which you need no speaker present. Enheduanna crafted her verses at the moment in history when making speech last forever first became possible. 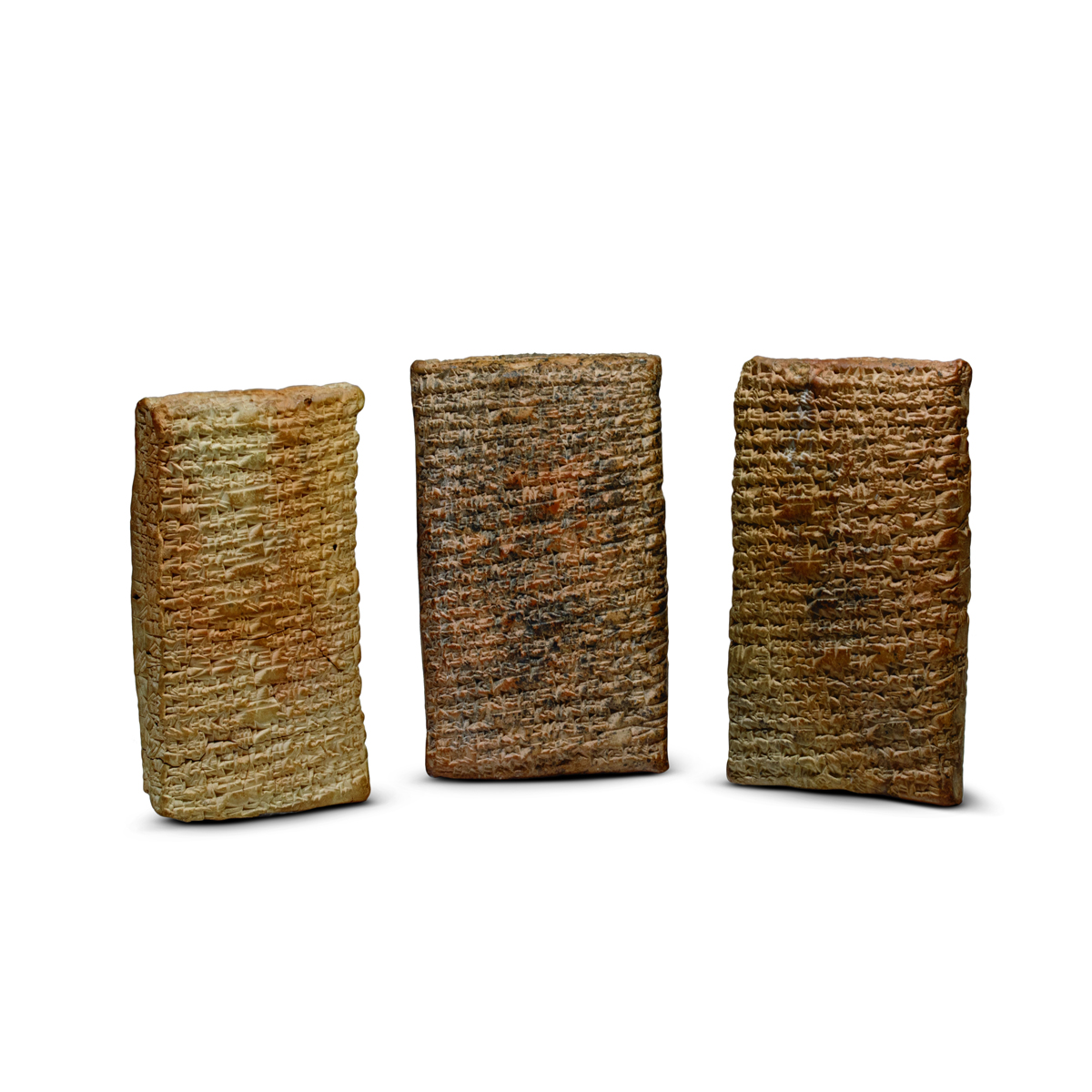 She wrote her best poems for Inanna, the queen of the firmament, the goddess of sex, death, war, justice, and power, whom Enheduanna saw as her protector, her savior, her avenger. In a vitrine on the right-hand side of the room, we see tiny, cramped, angular signs inscribed into three rust-colored clay tablets (try to imagine the almost unimaginable skill required to write these: when cuneiform was invented, it consisted of over two thousand signs, eventually streamlined into a still-flabbergasting alphabet of roughly six hundred). Fragments of English translation are presented alongside them. The line I am Enheduanna appears here, in this poem, “The Exaltation of Inanna” (probably authored around ca. 2300 BC; the tablets are copies from ca. 1750 BC). It was written after the death of her father, Sargon, the world’s first emperor, which precipitated instability across his already fractious kingdom, such that in Ur the people revolted against his successor. They were led by a military general, Lugalanne, who raided Enheduanna’s temple, killed her attendants, stripped the priestess of her powers, and cast her into the wilderness. Translations of this poem, unsurprisingly, vary wildly—but the version presented at the Morgan implies that Lugalanne sexually assaulted her, then pressed a dagger into her hand, suggesting she use it to kill herself:

He has turned that temple into a house of ill repute,

Forcing his way in as if he were an equal, he dared

approach me in his lust!

When Lugalanne stood paramount, he expelled me

He made me fly out the window like a swallow, I had

had my taste of life,

He made me walk a land of thorns.

He took away the noble diadem of my holy office,

He gave me a dagger: “This is just right for you,” he said. 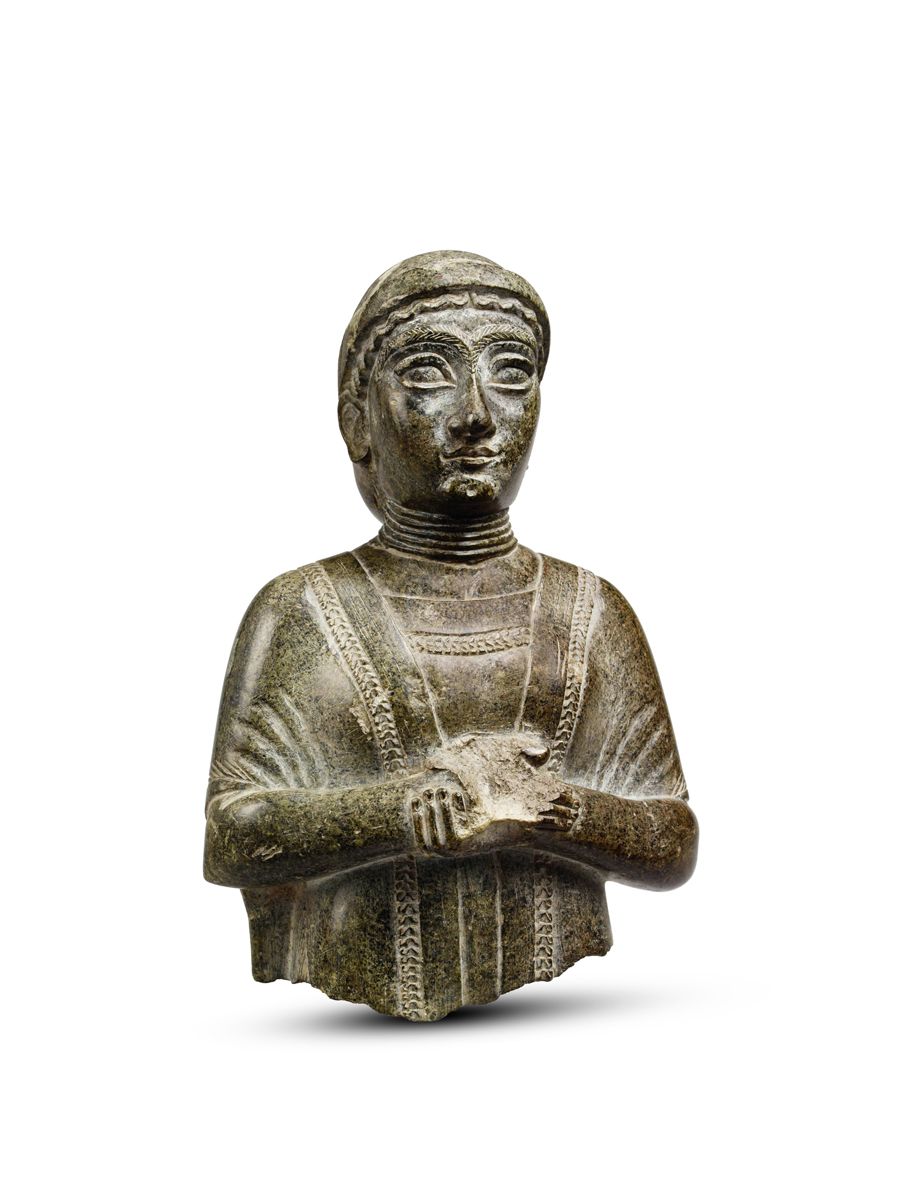 When she is ultimately restored to her position, Enheduanna praises Inanna for that miracle, and then clearly enunciates her authorship of this hymn—likening it to the labor and pain of childbirth: 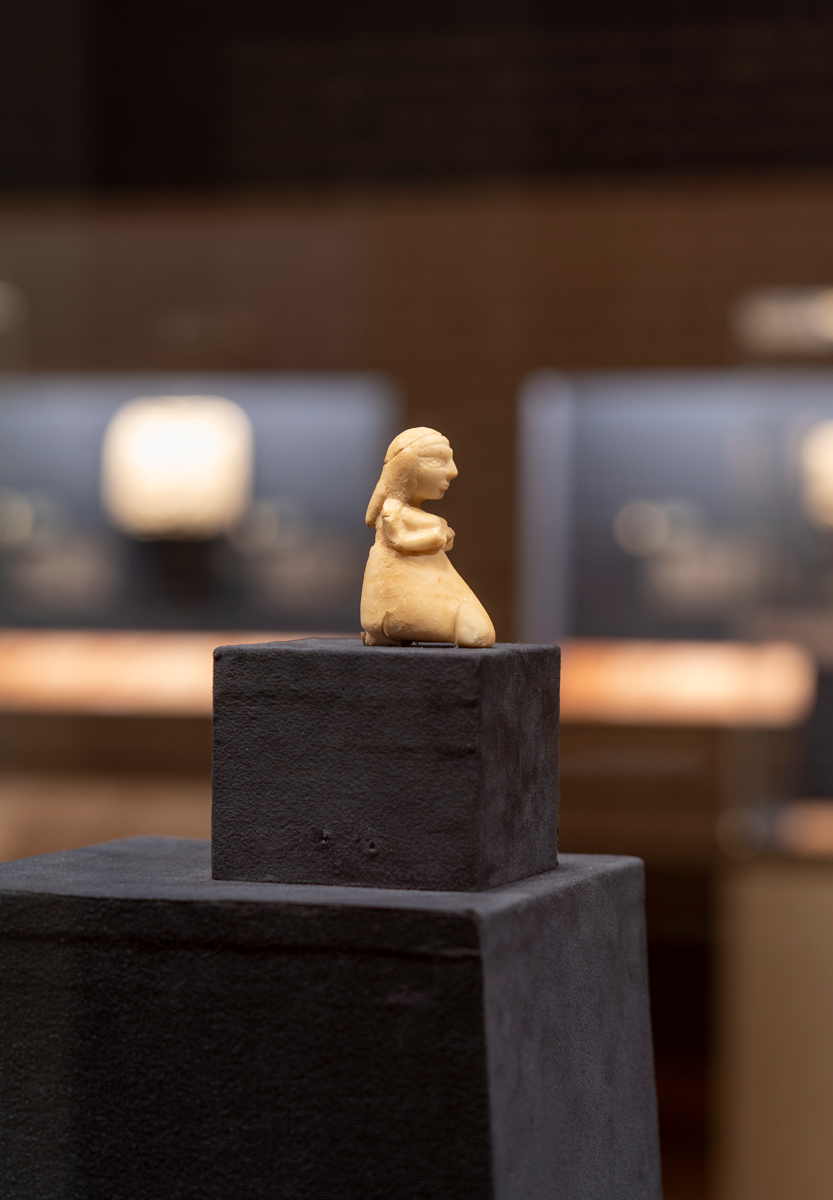 I am Enheduanna. This happened to me. I wrote this. To my modern ear, it sounds almost like confessional poetry, which is of course an absurd thing to think. Is Enheduanna’s “I” something I can even apprehend, much less relate to? What did “I am” mean to her, when the idea of personhood, of what a self was, in her world may well be untranslatable to ours? We cannot know—but I think we can believe her when she says the poem is hers.